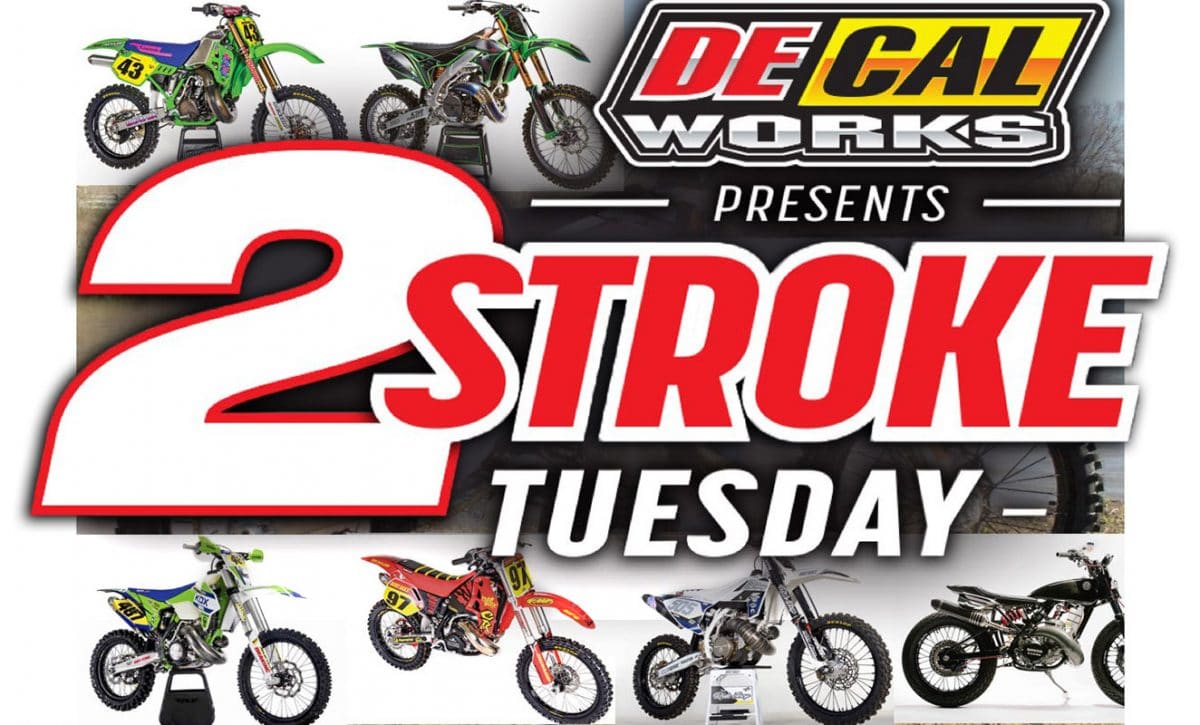 This week’s Two-Stroke Tuesday brought to you by Decal Works is all about big-bore 2-stroke projects ! We have a street legal KX500, Honda CR500 powered custom flat tracker and an unreal KTM440 that you don’t want to miss! Before Roger DeCoster was a big time team manager he was a Dirt Bike magazine test rider. In 1995 we made him test all the 500cc motocross bikes, click the link at the bottom of this post to see the full test!

Our Ransom KX500AF project started out with a phone introduction between Dirt Bike managing editor Mark Tilley and Wayne Ransom. The introduction then turned into an over-two-hour brainstorming session about the build and what was possible. With Wayne’s background in fabrication, the possibilities seemed endless.

This machine looks surprisingly stock just sitting on the stand. Looks can be very deceiving. Todd and the crew at SLM Racing wanted to make a statement with performance rather than looks. We think they nailed both.

After meeting up with the Dirt Bike Mag Crew,  I was stoked to get back from our annual Anaheim 1 trip & get these girls up in the air! Let’s get this CR party started. “ProjectGoldenGhost” and “ProjectPingKing” elevated on their new shop lift stands.”

Jonny at The Ride Shop AZ started building this bike over a year ago and just like any custom build ran into some issues with things just not coming together but he didn’t give up and the finished product is worth the wait for sure. There are a lot of industry leading companies on this build like Scalvini , Supersprox, Dunlop, P3 Carbon, Works Connection, TM Designworks, Fasst Co, ODI, Galfer, Seat Concepts, Rekluse and much more.

Our hybrid KDX500 project is a mix of a few different machines from two very different manufactures. Can you figure it out? Pete Treadwell and the crew at Western Powersports have been working overtime on this machine.

Yes those are billet CR500 center cases. Companies like Rekluse, Boyesen, Sudco and Crank Works are also involved on the engine portion of this build. Here are some words from Carson about this image “More parts are showing up for the Dirt Bike Magazine CR500 project. Crank Works got the crank finished, they balanced it and installed a billet rod. They also polished the transmission. Bryan from RBR rounded up a KX500 carburetor which is bigger. He also got a Boyesen intake and reeds which he matched to the cylinder. “

At first glance this might look like an average KX500 with some bolt-on upgrades that the average mechanic can perform. Nothing could be further from the truth! A high output ignition system by Powerdynomo, KX450 Fork upgrade, two piece clutch cover , special 5th gear and we are just getting started.

This machine is impressive but once you really start looking close the attention to detail shines through and because this is a one-off build everything had to be customized. Engine, suspension and the entire chassis has custom features on it everywhere. The kickstand located on the left side is not a coincidence Dues Customs Michael ‘Woolie’ Woolaway fabricated it that way so it was easier for Pedrosa to start the bike.

The Kawasaki KX500 is one of the most iconic two-stroke machines ever produced. On the professional racing level, this bike dominated off-road and outdoor motocross championships but was never a winner in the confined spaces of Supercross. Okay, to be fair, there was never a class the KX500 was eligible to participate in. With Red Bull making this year’s Straight Rhythm open to big-bore two-strokes, Tyler Bowers decided to build himself a KX500 with some Supercross credentials. He appropriately named it “the Unit.”

If you are of fan of 500cc two-strokes check out our 1995 Shootout with “The Man” Roger Decoster doing all the testing. Click the image below for the complete test!