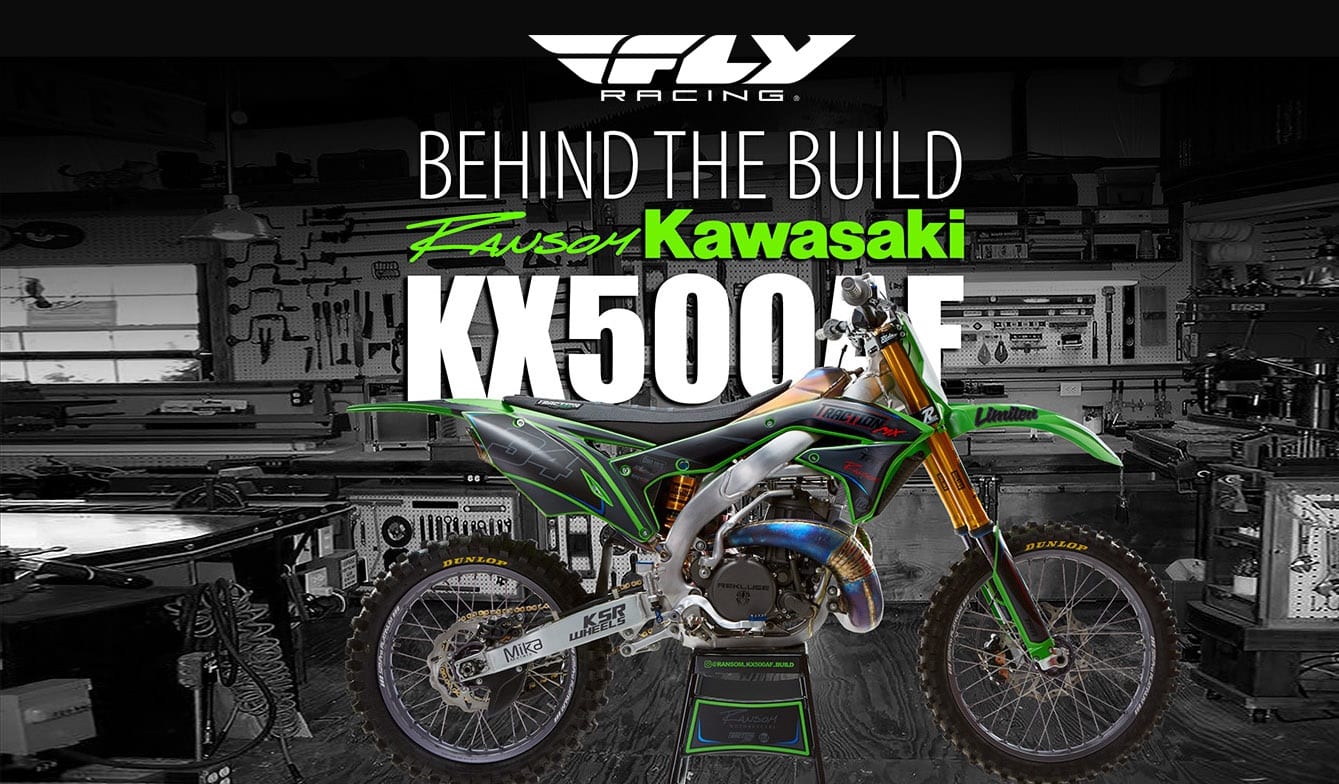 Art is a “diverse range of human activities in creating visual, auditory or performing artifacts expressing the author’s imaginative, or technical skill, intended to be appreciated for their beauty or emotional power,” as described by Wikipedia. 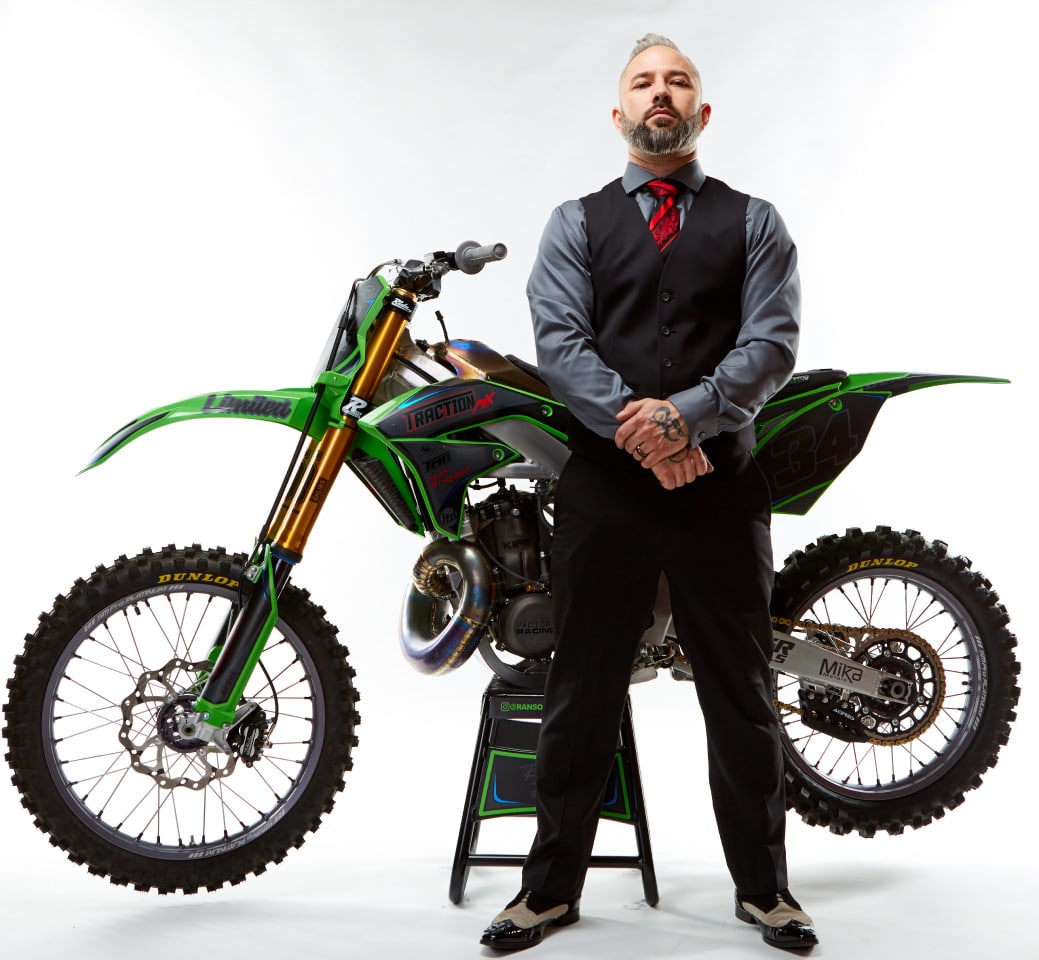 Wayne Ransom is a famous bike builder in the street bike world, and this KX500AF is his first off-road project. After being a part of this build, we’ve come to realize art comes in all shapes and sizes to be consumed by each individual in their own personal way. We, however, prefer to ride our art. 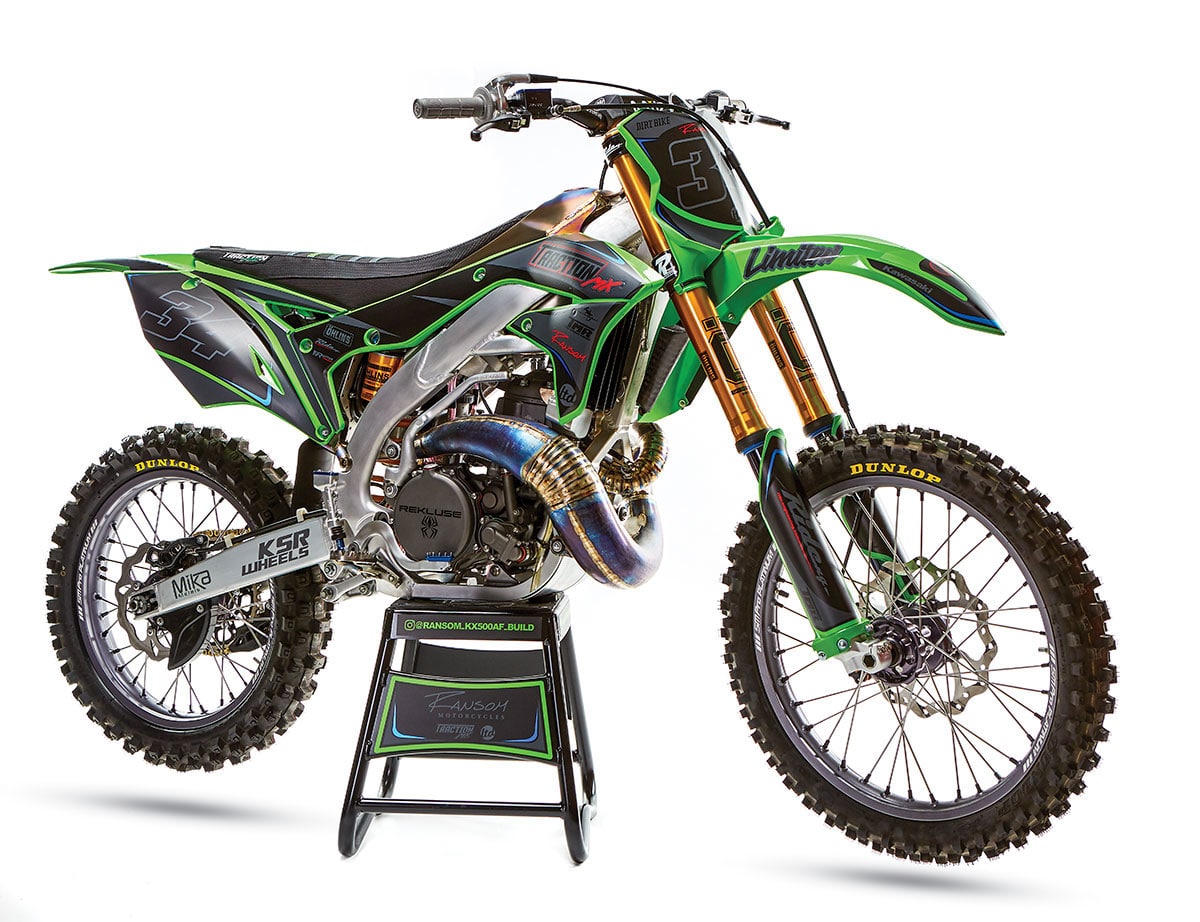 THE CREATIVE PROCESS
Our Ransom KX500AF project started out with a phone introduction between Dirt Bike managing editor Mark Tilley and Wayne Ransom. The introduction then turned into an over-two-hour brainstorming session about the build and what was possible. With Wayne’s background in fabrication, the possibilities seemed endless.
With everything down on paper and a plan in place, the real work began. The chassis would be from an older Craigslist find, a KX450F. Just like most of our previous two-stroke projects, the machine was completely disassembled and inspected. On this build the inspection process was not as intense, because so much of the bike would be replaced. 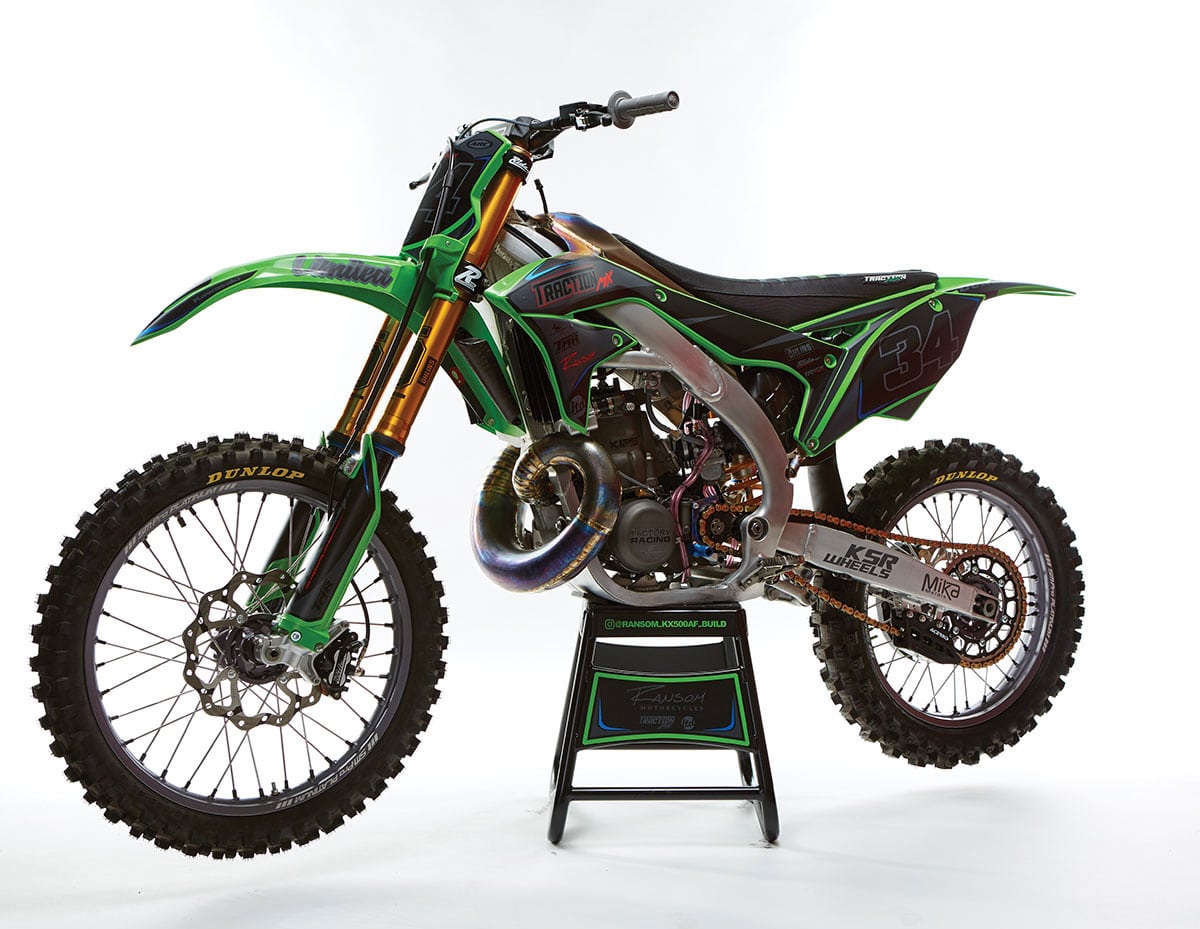 Another chassis item fabricated from raw material is the titanium subframe. This was also made in-house by Wayne. There wasn’t much room for artistic interpretation here, because most of the measurements are straight off the stock unit with some minor refinements to suit our specific application. It did, however, give us a little over half a pound in weight reduction.

A new air intake system consists of a KX450 main air-box and KX500 airboot. These items provided the fitment we needed and air volume the 500cc engine required, but they don’t just bolt up to each other, so an adapter was built to mate them together.
We did include some items on the chassis that were not fabricated in-house. Ride Engineering’s black-anodized triple clamps were used, along with their dual-piston, billet-aluminum front brake caliper and steel-braided front brake line. Ohlins’ suspension replaced the stock Showa components. We went with a spring fork setup to provide more rider comfort. For wheels, we went with gunmetal grey-colored hubs and rims with silver spokes and black nipples from KSR. We wrapped those with Dunlop rubber. Mika Metals’ handlebars, grips and drive components were also used.

With the chassis modifications squared away we focused on resurrecting the engine. Like we said before, the engine was donated to the build in a box by a friend of Wayne’s. Some small parts were missing, while others were not worth saving, but overall we had a fairly complete engine package. Every piece of the engine would receive attention. The cylinder and head would be repaired by Millennium Technologies, then massaged over by iconic Kawasaki engine builder Tom Morgan. The crank was also balanced with the ProX piston to reduce vibration. A complete Boyesen Rad valve system would now monitor fuel into the cylinder via a new 39mm Keihn carburetor. 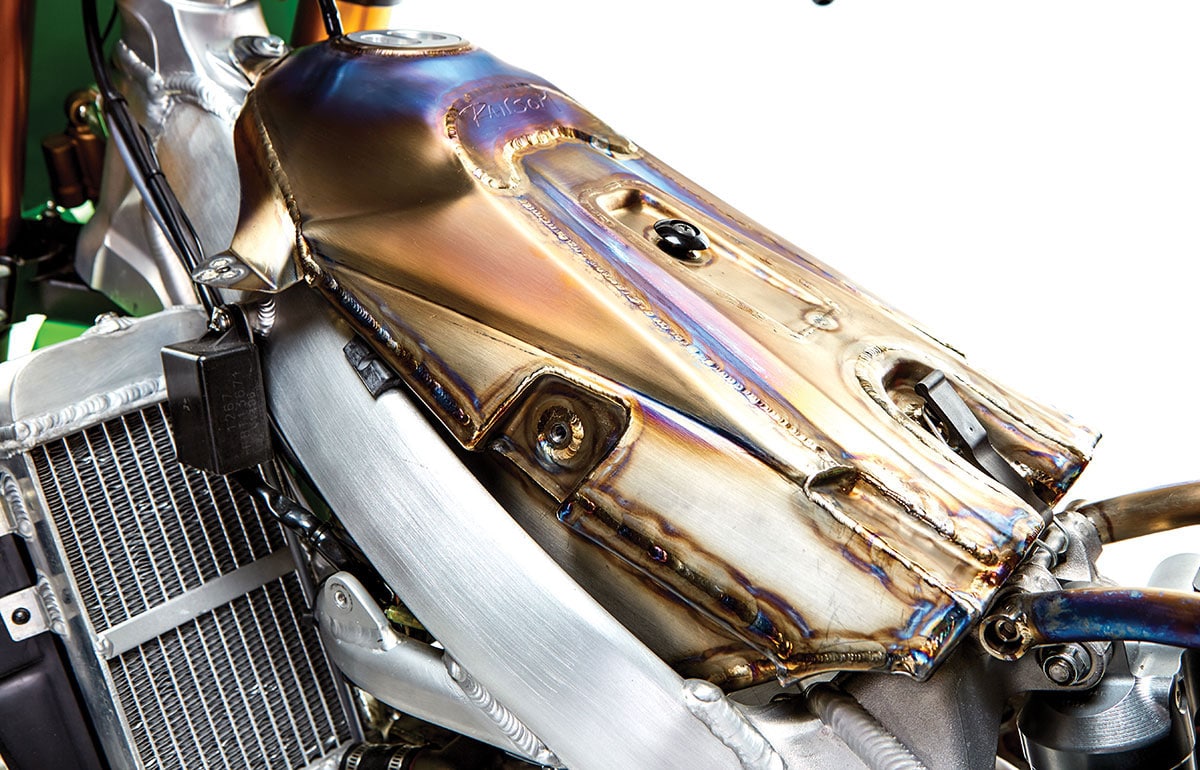 We wanted to make usable power that was fun to ride rather than “yank your arms out of your sockets” type of power. Wayne also fabricated a compression release into the head and relocated the coolant elbow farther forward to provide more exhaust pipe clearance. This was not the only coolant system modification—the radiators also received large amounts of attention to not only fit but also improve cooling. 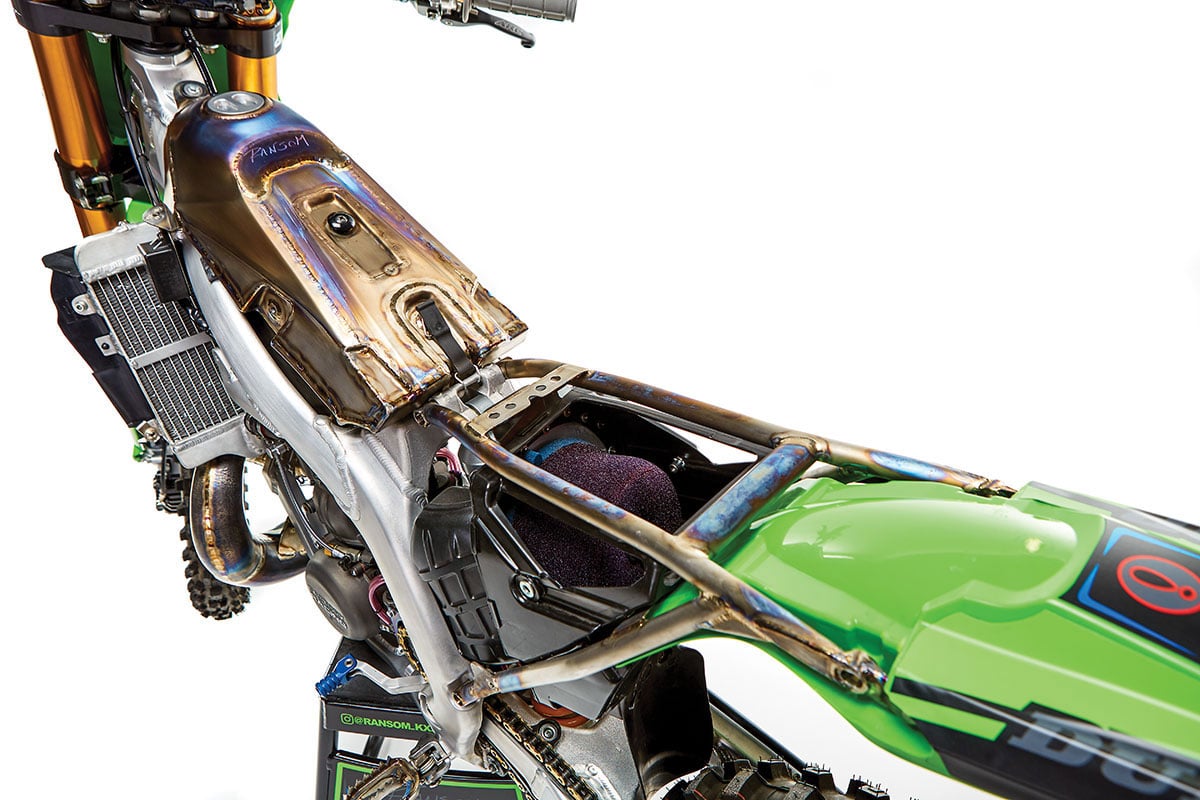 Working on the stock KX500’s clutch was a nightmare; the entire sidecase must be removed just to access the clutch plates. The entire clutch was overhauled internally using a ProX basket and Rekluse moving parts, and the right-side case cover was highly modified to use a KX450F cover. Did we mention a Magura hydraulic assist? Yes, it has that as well. The engine front headstay mounts are fabricated out of titanium and designed to work with the new coil-mount location directly in front of the cylinder on the frame. Wayne designed a new kickstarter out of billet aluminum because the stock ones had issues braking. It may be going a little overboard, but hey, why not?

Once all the modifications were done, instead of just hacking up an existing KX500 exhaust system, Wayne decided to make a custom unit designed specifically to match the engine modification done by Tom Morgan. Of course, the new exhaust is made out of titanium. Even the silencer was reconfigured, adding design modifications to match the style lines of the modern Kawasaki plastics, so everything flows together as one unit.

ADMIRING ART
In a lot of ways, the Ransom KX500AF project breaks the mold of how we build project bikes. Will we be fabricating all the parts on upcoming builds? No, but it does show us what’s possible in the future, and we might attempt some new things. For now, though, there is a long list of aftermarket companies making extremely trick bolt-on items for our consumption, and we are happy with that. Wayne Ransom has a talent for envisioning a concept and bending metal into art that touches people in a way that can’t be described. This sort of talent is only seen among a very select group of people throughout history, and we think the label “artist” fits him perfectly. In our opinion, the Ransom KX500AF project is one of the cleanest KX500AFs we’ve seen and is definitely the best-looking KX500AF ever built. We can’t wait to see what he comes up with next.