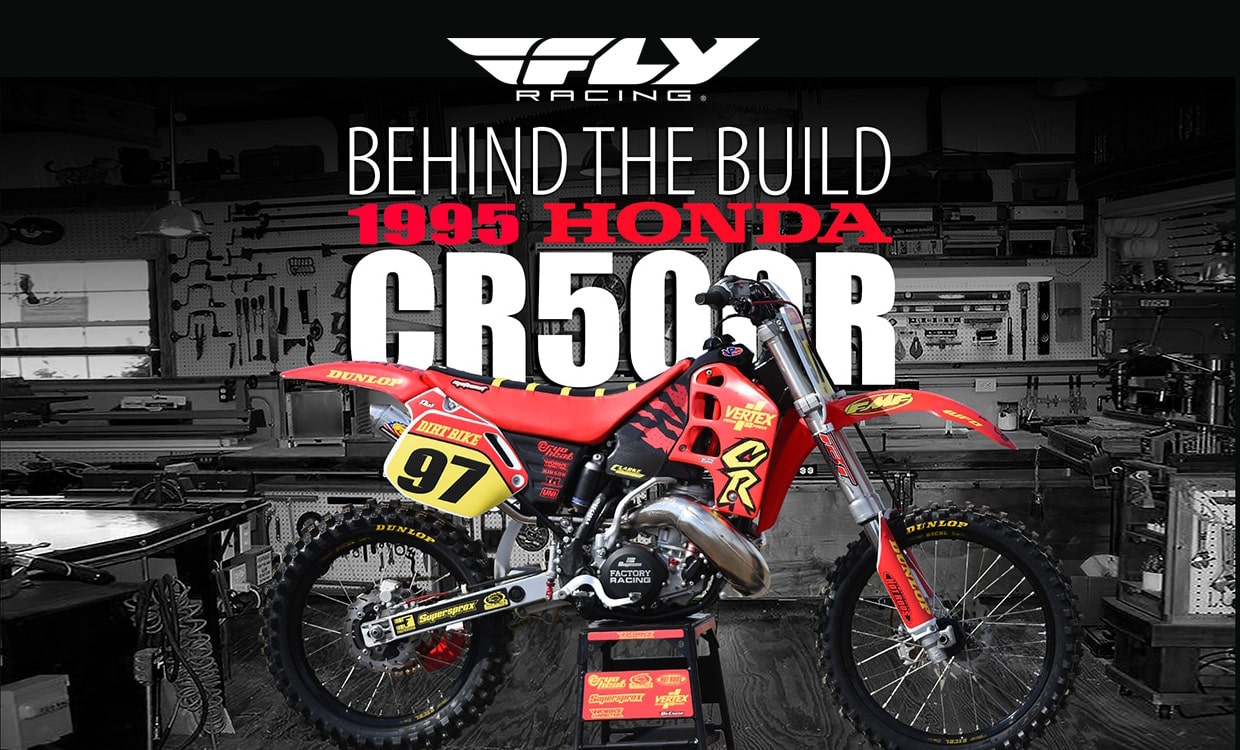 One major key to any successful older bike build is starting off with all the parts. And in the case of a Honda CR500R, this is even more important because a lot of the stock parts are no longer available as new items. Because this machine had been sitting for the better half of a decade, we decided to tear it completely down to the frame, inspecting everything along the way. It’s a good thing we did. The CR500R came equipped with Kayaba (KYB) suspension components front and rear in 1995. The shock was a pretty straightforward rebuild process for the crew at TBT Suspension. All the seals, bushings and oil were replaced. The shock was re-valved internally, and we installed a new spring to match. The front end was a different story.
After doing some research, we found out that the KYB fork that Honda used on the CR500R in 1995 was only used for one year because the damping rods were prone to breaking. Recalls were issued in 1995. Of course, we had a broken one, and they are no longer available brand new. TBT and Race Tech worked together to find a part that was close enough and would work after some intricate machining. All the worn parts and oil were replaced with new items. TBT valved and sprung the forks to match the new shock specifications.

Our CR500R chassis got lots of attention. The main frame had some issues directly under the engine cases. The round tubes had been crushed into submission. This is common for steel frames from the ’90s. Soft suspension and big jumps don’t go well together. Dr. John’s Motorcycle Frame Straightening handled the main frame issue and sorted out a couple of subframe issues as well. After all the repairs were completed, the crew at R&R Powder Coating coated our main frame and subframe gloss black. The swingarm was in pretty decent shape and only required minor cosmetic work, but while it was off the bike, the pivot and rear suspension bearings were replaced with kits from All Balls Racing.
Colin and the crew at Faster USA took our hammered stock wheels and made them look better than new. They replaced all the bearings, cleaned up the hubs and then Cerakoted them a dark grey. The wheels were reassembled with new spokes, nipples and black Excel Takasago rims. Supersprox sprockets, a chain set, Tusk brake rotors and a set of Dunlop MX33 tires finished off the wheelset.
Our CR500R got an all-new look via a UFO plastics kit, a black Clarke gas tank that features the same fuel capacity as the OEM unit and a complete custom graphics kit from Decal Works. We wanted to mix some old-school and modern style into the graphic design.

The powerplant needed lots of work and probably received the most attention on this build. Just like the chassis, it was torn down completely. Race Tech’s engine department bored the stock cylinder to match the new Pro Replica piston from Vertex. We sent all the new internal parts, along with the existing parts that would be reused, to CryoHeat. They took all the parts and put them through their proprietary CryoHeat stress-relieving cryogenic process that makes the steel and aluminum parts much stronger with over a 200-percent-longer service life. 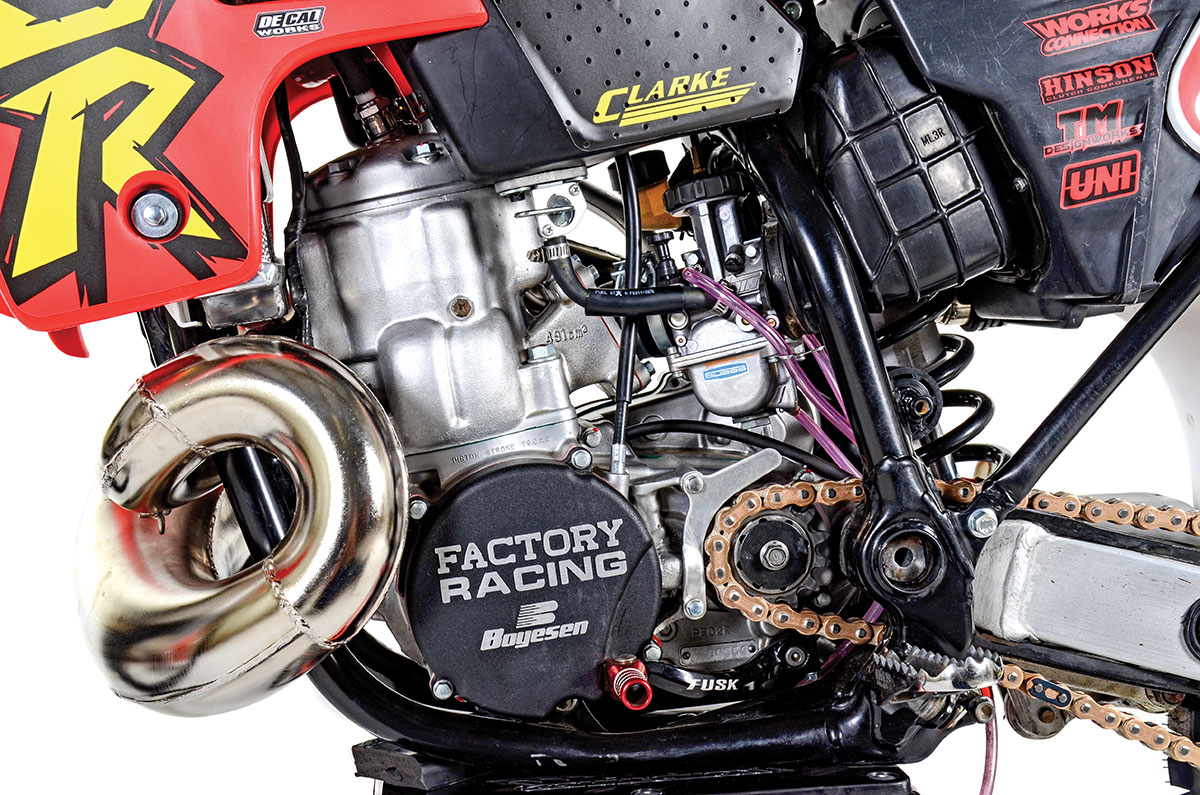 The process also helps dissipate temperatures, so this engine should be running approximately 25 degrees cooler while at the same time making more power. CryoHeat can treat practically everything on the bike, such as chains, sprockets, suspension and brakes. Since the engine was already apart, we went the extra mile and had CryoHeat micro-polish all of the moving internal steel parts. This makes the parts extremely shiny like chrome and slippery when wet! Since this is designed to reduce friction, we were hoping for dramatically improved smoother shifting.
Other engine performance items included on this build were a complete Hinson clutch, FMF exhaust, Boyesen RAD valve, Boyesen ignition cover, Boyesen clutch cover, MSV high-flow water pump impeller kit and an MSV exhaust manifold. The engine cases and cylinder were also vapor-honed by CryoHeat to make them look new again. Then CryoHeat had its mechanic Scott, aka “Skid Plate,” do the full assembly of the engine.

The best part about building these older two-strokes is being able to get them dirty once all the beauty shots are completed. Our first day of testing on Austin Perkins’ CR500R didn’t go as planned. After a brief shakedown by the man himself, we headed off to a private rental day at Perris Raceway. It helps that Austin’s job is managing the day-to-day operation of the track, and the owner Jimmy Sloan is a huge moto enthusiast. After about 35 to 45 minutes of riding, the front end got really springy, kind of like a pogo stick. As we pushed down, the forks made a rather puzzling clanking sound.
After presenting this to Austin and the suspension crew from TBT Racing, we were met with huge looks of disappointment, because at that moment they knew both the damping rods had snapped and our day of riding was over. Just when we thought all was lost, like a scene out of Winners Take All, editor Mark Tilley announced he had a spare front end off a 2003 Honda CR125R that would bolt on with some minor modifications. With this confirmed after a few hours of mocking everything up, TBT rebuilt the new fork setup and valved them to match. The 2003 KYB fork is a much better setup overall than the 1995 version, helping the overall handling of the bike. Austin’s CR500R has huge amounts of power but is surprisingly easy to manage and rolls on without a huge hit down low. Yes, it vibrates compared to modern-day four-strokes and smaller-bore two-strokes, but we wouldn’t expect it not to. The Fasst Company Flexx bars and anti-vibration bar inserts helped, but nothing is going to stop a CR500R from vibrating completely. A rebuilt 1995 Honda CR500R is not the kind of project that everyone is going to be happy with—no matter how well it turns out. However, the entire Dirt Bike staff is very excited with how this build turned out, and if you are a real fan of moto, it should at least bring a smile to your face. 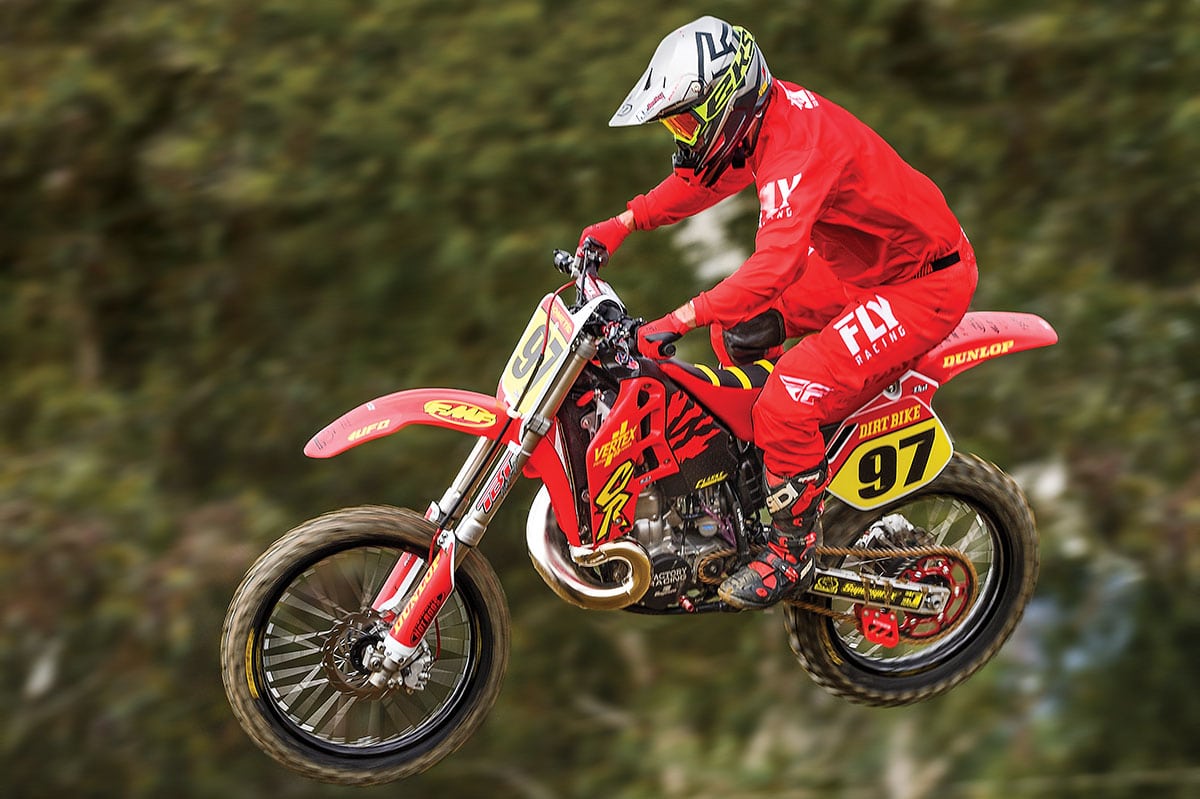