KAWASAKI KX500 PROJECT: BEHIND THE BUILD 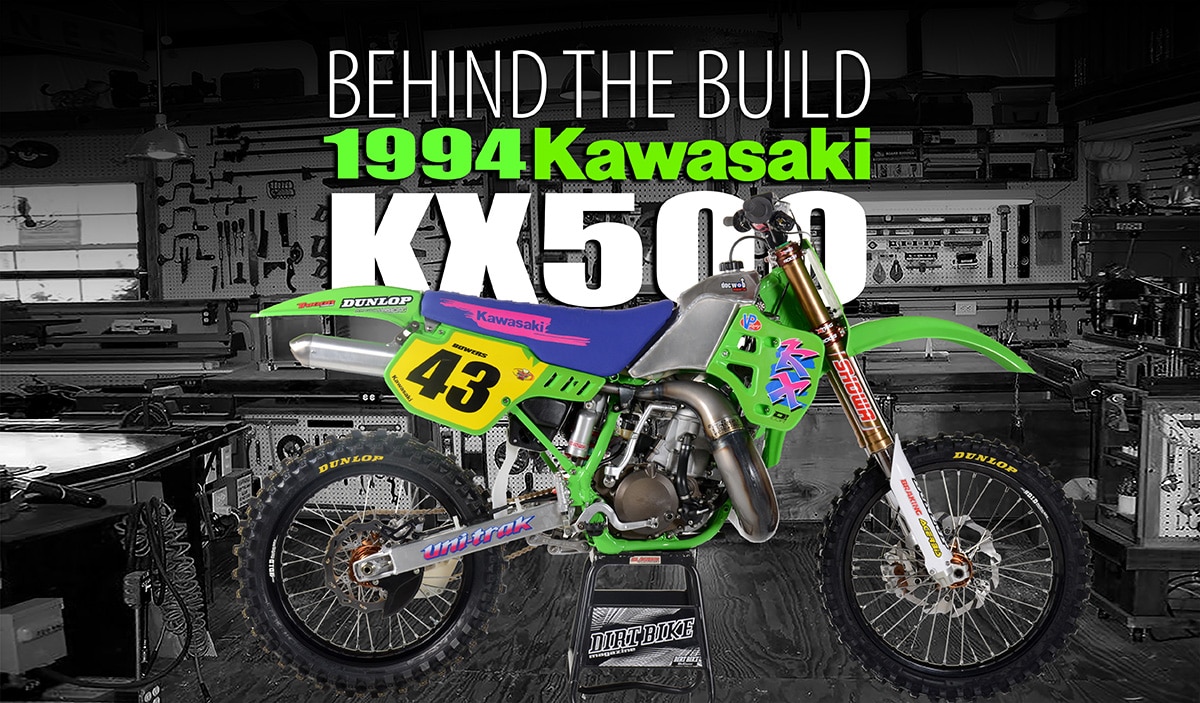 The Kawasaki KX500 is one of the most iconic two-stroke machines ever produced. On the professional racing level, this bike dominated off-road and outdoor motocross championships but was never a winner in the confined spaces of Supercross. Okay, to be fair, there was never a class the KX500 was eligible to participate in. With Red Bull making this year’s Straight Rhythm open to big-bore two-strokes, Tyler Bowers decided to build himself a KX500 with some Supercross credentials. He appropriately named it “the Unit.” 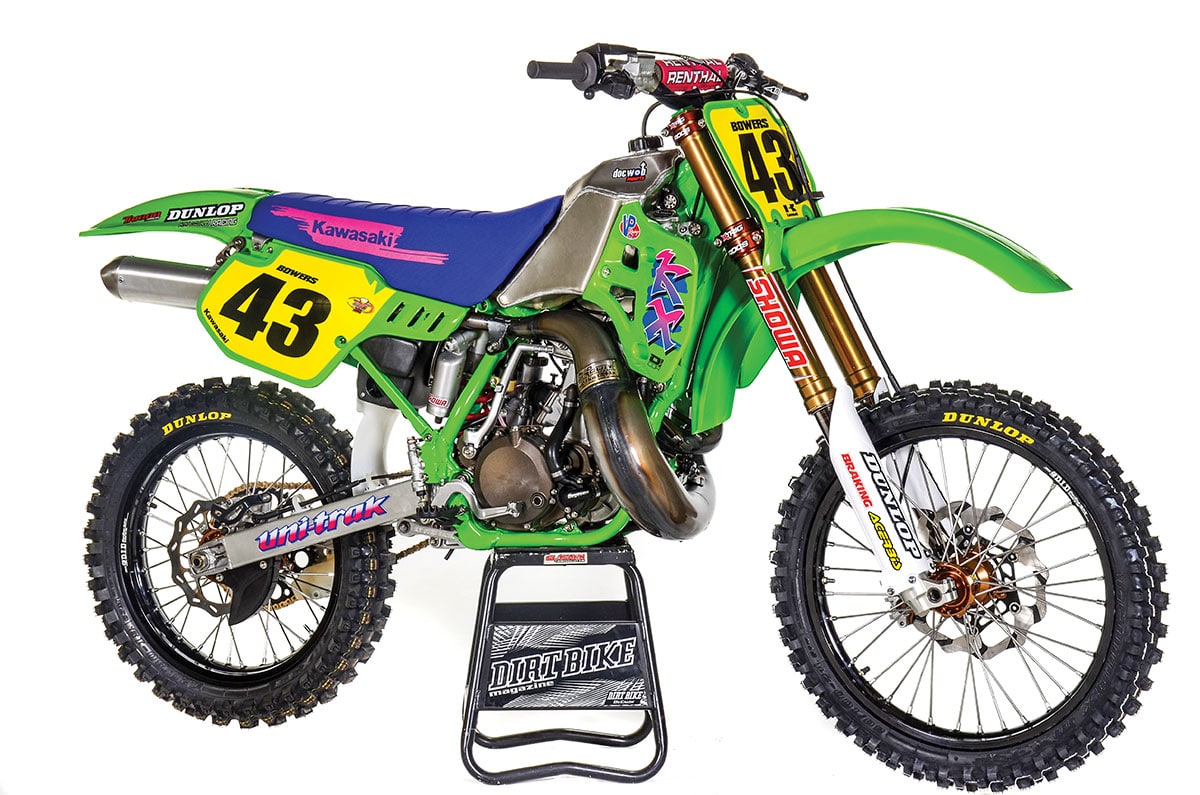 This build would not be our typical “find an old bike and fix it up” project. This bike would have to perform at the highest levels of the Supercross world and play a supporting role in a special project with Tyler’s wife Bradi (more on that later). Unlike most factory-level riders, Tyler Bowers likes to get his hands dirty in the garage. This time he wasn’t alone in the garage, getting help from a few friends—Greydon Day, Laird Powers and Travis Parry. After purchasing the 1994 Kawasaki KX500, Bowers decided that the classic ’90s styling would remain, but there would be major upgrades underneath the surface.

The bike was actually in great condition compared to what we normally see, but, as with every older two-stroke build, we tore the bike down completely anyway. The main frame and subframe needed some work before they could be made pretty again. As we mentioned before, factory Kawasaki raced the KX500 a lot, so if you know the right people, you can have access to lots of secret tricks.

After the frame and subframe were restored to their original condition, both had gussets welded into key positions throughout, making them just about indestructible. After gusseting, the subframe and main frame were sent to Full Throttle Powder Coating for some neon green love. The swingarm was next on the list for fabrication. The axle holes were modified to accept the larger KX450 axle, and the brake caliper mount was reconfigured so a newer rear brake system could be utilized. All the pivot bearings and seals were replaced. A KX Guru linkage arm was also added to help stabilize the rear end. The rear shock uses the stock configuration but internally contains parts and settings that factory Showa was very tight-lipped about.

Up front, the only item that remained from the original 1994 KX500 was the steering stem. The front braking system is off a newer KX450 with an oversized front Braking wave rotor and steel-braided line. Showa A-Kit spring forks—with, again, very secretive components internally—are used for Supercross. This also allowed the use of a newer KX front wheel. Using the OEM steering stem, the Xtrig clamps bolted up, but the top clamp required a sleeve for proper fitment because the KX500’s stem is smaller in diameter than the KX450’s.

The other crucial part up front was a billet steering stop from Trick Engineering. The air box, intake boot, engine mounts, radiator hoses, brake calipers, master cylinders and other miscellaneous parts were sent to Premier Vapor Blasting and came back looking better than new. ICW straightened and braced the radiators to the exact same specs that Tyler runs on his KX450.

Tyler really wanted to keep the old-school look of the bike, so some minor modifications were done to the front fender, and a custom bracket was 3D-printed by Greyson Day for the front number plate. Jeff at SDG created a custom gripper seat cover that looked like it was straight off the assembly line in 1994. The aluminum tank and titanium fasteners came from DocWob Imports. DocWob has a variety of trick items available for older two-strokes. Decor Visual topped off the build with a set of custom graphics, capturing the mid-’90s vibe perfectly.

Lots of time was also spent on the engine. All the internal bearings and seals were replaced. Tyler himself spent hours scrubbing the cases with a Scotch-Brite pad. Some of the modifications were performance-driven, others were for looks, and some were just for convenience. The cylinder was ported by Tom Morgan for more controllable power. Trick Engineering performed its Super Finish treatment on all the transmission parts. This is a multi-step vibratory chemical polishing process that is designed to reduce friction.

We guarantee that one of the trickest parts on the Unit will be overlooked by most people. The stock KX500 clutch covers were one piece, so the entire outer right case would have needed to be removed just to change clutch plates. Factory Kawasaki made a handful of two-piece covers, but those are long gone. Clayton Miller at Trick Engineering now has the technology to produce complete machined billet two-piece KX500 clutch covers. The version used on this build was Cerakoted a bronze color to match the ignition cover, keeping the look uniform throughout. The last performance item added was a complete Pro Circuit exhaust system featuring a works-style pipe and 304 Factory Sound stainless-series silencer.

With the Unit build complete two weeks prior to the event, it was time for Tyler to finish out the last round of Supercross in Vegas, then it was go time. Unfortunately, it was just not meant to be. Tyler tangled with another rider and suffered a hand injury, forcing him to withdraw from the Red Bull Straight Rhythm. But remember when we said Tyler’s wife Bradi also had some plans for this bike? Bradi Bowers just happens to be a professional model. We know, lucky guy! Because the KX500 was a mid-’90s model, Bradi did a ’90s-themed Extreme Racing swimsuit-type photo shoot that resulted in T-shirts and posters being sold. All the proceeds went to Tyler’s racing program. Now that’s teamwork the Bowers family way. This bike might not have lined up to race the Red Bull Straight Rhythm, but it’s still a winner in our book.