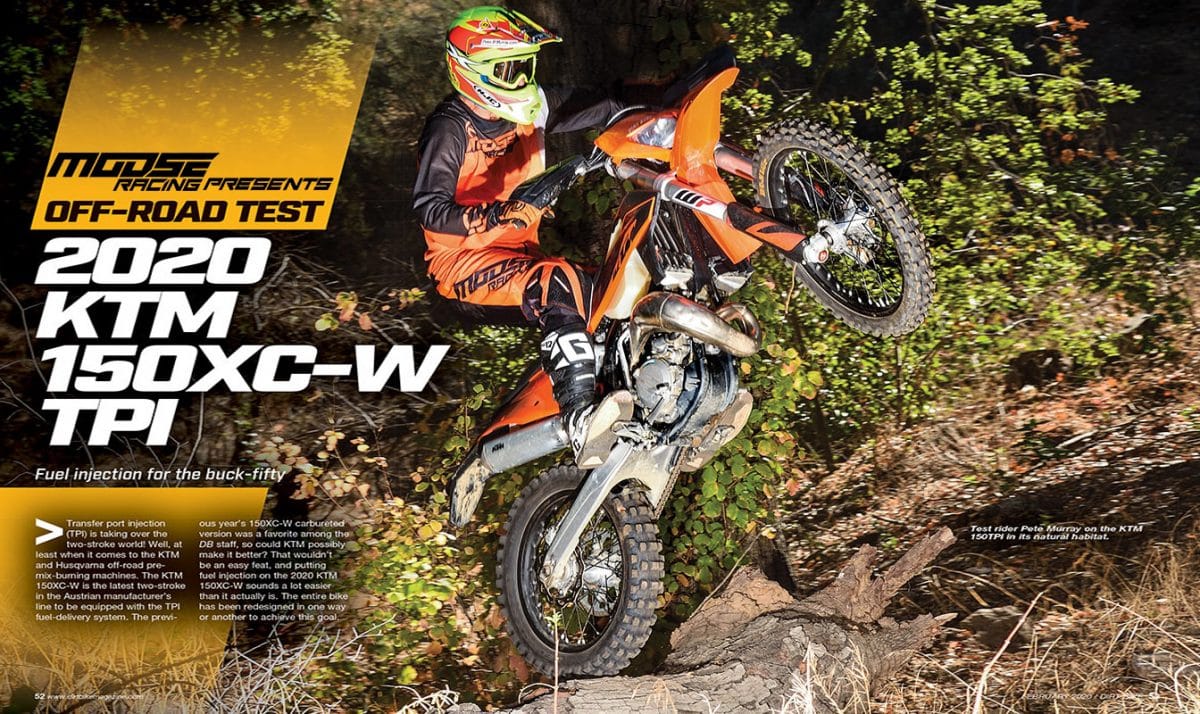 The KTM 150XC-W is the latest two-stroke in the Austrian manufacturer’s line to be equipped with the TPI fuel-delivery system. The previous year’s 150XC-W carbureted version was a favorite among the DB staff, so could KTM possibly make it better? That wouldn’t be an easy feat, and putting fuel injection on the 2020 KTM 150XC-W sounds a lot easier than it actually is. The entire bike has been redesigned in one way or another to achieve this goal. 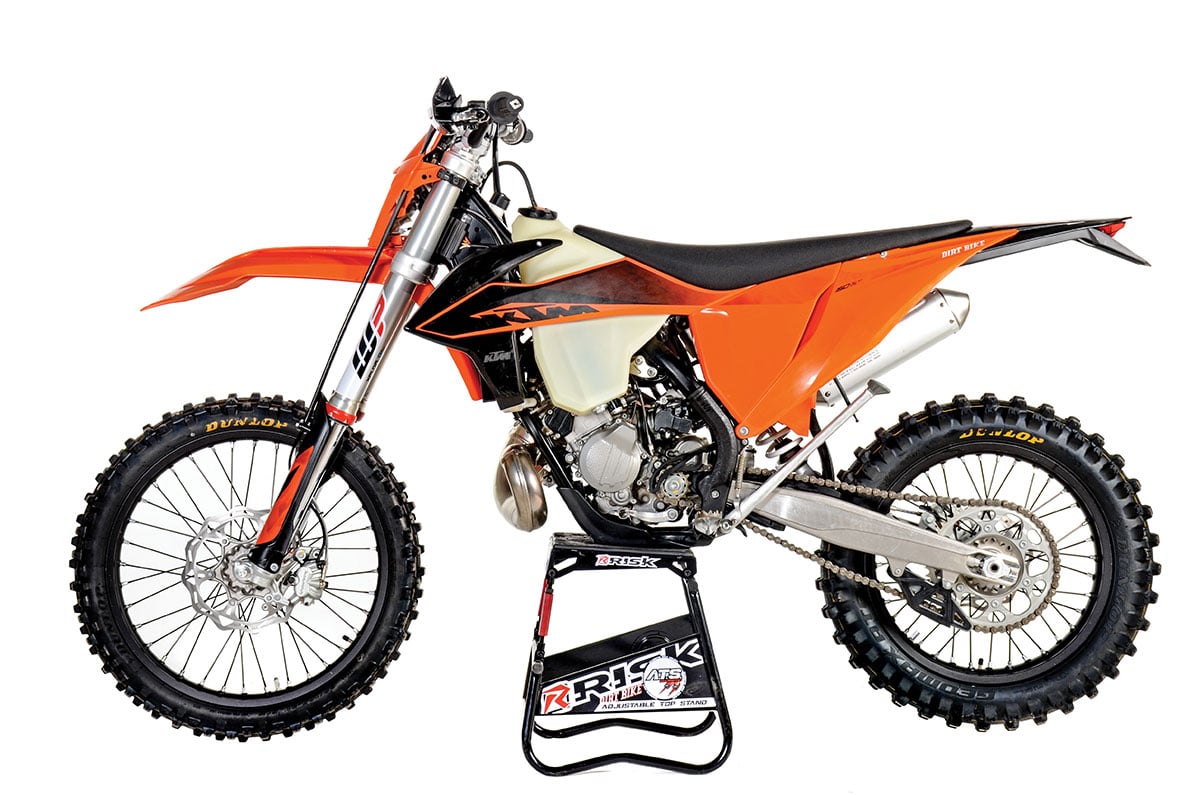 As you can imagine, the engine went through drastic changes. The KTM 150XC-W TPI cylinder has a bore of 58mm with refined port timing and a redesigned power valve. For the fuel-injected application, the cylinder features two domes that hold the fuel injectors, supplying fuel to the rear transfer ports. The downstream injection of the fuel mixes with the upstreaming air. This is the same system we have seen for the last few years on the 250cc and 300cc XC-W TPI models—just adapted to the 150cc model. A small tube located in the rear of the cylinder is connected with an intake pressure sensor. This sensor supplies pressure data to the control unit. The cylinder features a new exhaust-port layout for increased engine performance. The upper contour of the exhaust port has been machined to ensure more accurate port timing. Last but not least, the new cylinder allows for the use of a more widely available traditional type of spark plug. With pretty much an all-new engine, the exhaust needed to be reworked. The expansion chamber looks more like what we are used to seeing on a 250cc machine than what we are accustomed to seeing on a 125cc or 150cc model. Instead of coming out of the cylinder, making a bend and going straight back, it makes a bend to the left and wraps back around to the right before heading back. The silencer looks more like what we are familiar with on small-bore two-strokes.

The 2020 150XC-W TPI has a new chromoly steel frame. While some of the frame was unchanged, KTM redesigned certain sections with greater lateral, longitudinal and torsional stiffness in hopes of improving rider comfort and overall stability. The laterally attached engine head stays are now made of aluminum for a reduction in vibration. The frame guards have also been redesigned to improve the rider’s grip on the bike and to act as a heat shield for the silencer on the exhaust side of the machine. Still constructed of aluminum to keep the weight down, the subframe is 40mm longer, giving the rear fender a stronger base.

Just like the other models in the XC-W lineup, the 2020 150XC-W TPI is equipped with a 48mm WP Xplor fork. This setup was developed by WP for use on KTM off-road-specific models and features what is referred to as a split-fork design. Basically, this means that although it does have springs in both fork legs, the legs have separate damping functions. The left handles compression damping, and the right takes care of rebound damping. Both can be adjusted at the top of each fork and have a total of 30 clicker positions each. For 2020, KTM also added a new mid-valve piston to try to keep the forks from blowing through their stroke and bottoming.

In the rear, KTM is still using a one-piece aluminum swingarm, and this is attached directly to the WP Xplor shock without the use of linkage. The XC-W and the EXC line are still using the Progressive Damping System design, or PDS as it’s commonly known. The 150XC-W is built primarily for trail riding, and KTM feels the PDS system has less of a chance of getting caught up on anything because there is no linkage hanging down below the swingarm. Just as on the fork, changes were made to improve resistance to bottoming. The second piston was reworked, while the shape and sealing of the cup were redesigned. New settings on the shock were configured to match the internal changes and frame changes.

Other items that are returning on the 2020 KTM 150XC-W from previous years include Brembo braking components front and rear, Dunlop AT81 off-road tires with an 18-inch rear, a Brembo-actuated hydraulic clutch, an electric starter with a kick-starter backup, on-board trip computer and an oversized gas tank.

WHAT IT ALL MEANS
We got to test the 2020 KTM 150XC-W in just about every type of riding and racing condition or discipline you can think of. Trail riding in tight woods, wide-open desert, motocross, Grand Prix-style courses and, yes, we raced them in all the same settings as well. What we came away with was—as with the 250 and 300cc TPI models—the 2020 150XC-W TPI is in a world all its own. The power characteristics are almost the complete opposite of the 150 MX model. The power comes on sooner down low, with much more torque out of the hole, pulls strong through the midrange and still has decent top end. We say it has decent top end because, compared to the 150 MX model that just screams on top, it signs off early. The strong bottom and midrange power work great in tight, technical trail-riding conditions, making us feel like heroes. When that occasional stall presents itself, that magic electric-start button has you back in action before the bike can stop rolling. That is probably our favorite thing about the bike—not because a small-bore two-stroke is so hard to start, but because you don’t have to kick it. We did notice that when you start up the 150XC-W after it has been sitting idle for more than a minute or two, it needs to be cleaned out like a carbureted model, but once the computer catches up, it’s back to running like a perfectly jetted two-stroke. We do remember experiencing this with the first-generation 250cc TPI models we tested, but that has since been fixed. 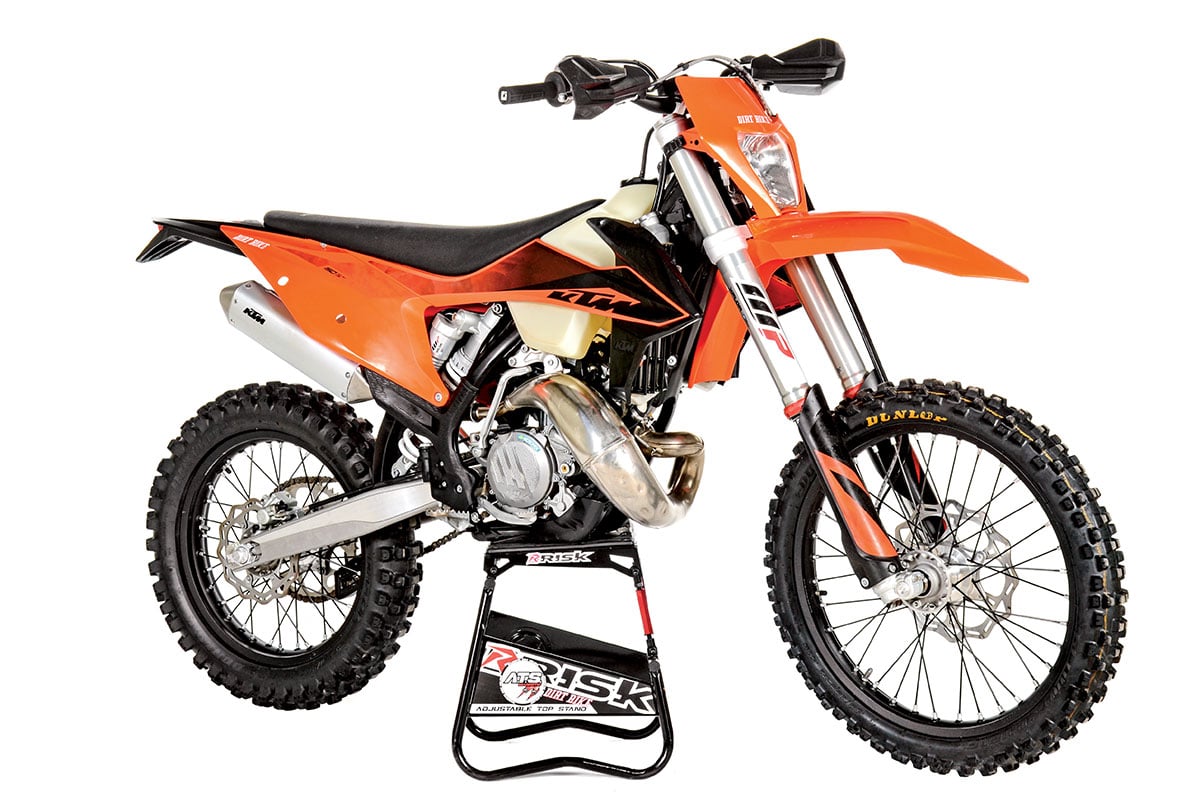 Suspension on the 2020 KTM 150XC-W TPI model is set up for a rider who is around 140–160 pounds and for trail riding-type conditions. Even taking that into consideration, it’s set up on the soft side, and anyone over 150 pounds with any type of speed will need to make some spring-rate changes at both ends. Riders with a little more girth or speed will need to do a lot more. We recommend checking out the WP Pro Components XACT cone-valve fork.

Just like with the previous 150XC-W, the TPI version is rapidly become a DB staff favorite to ride on just about any occasion. Yes, the suspension is on the soft side, and we had to add an aftermarket spark-arrester-equipped silencer to be legal in government-run off-highway-vehicle parks, but this machine is a blast to ride and produces lots of smiles.

DAKAR RACERS GET AN UNPLANNED DAY OFF