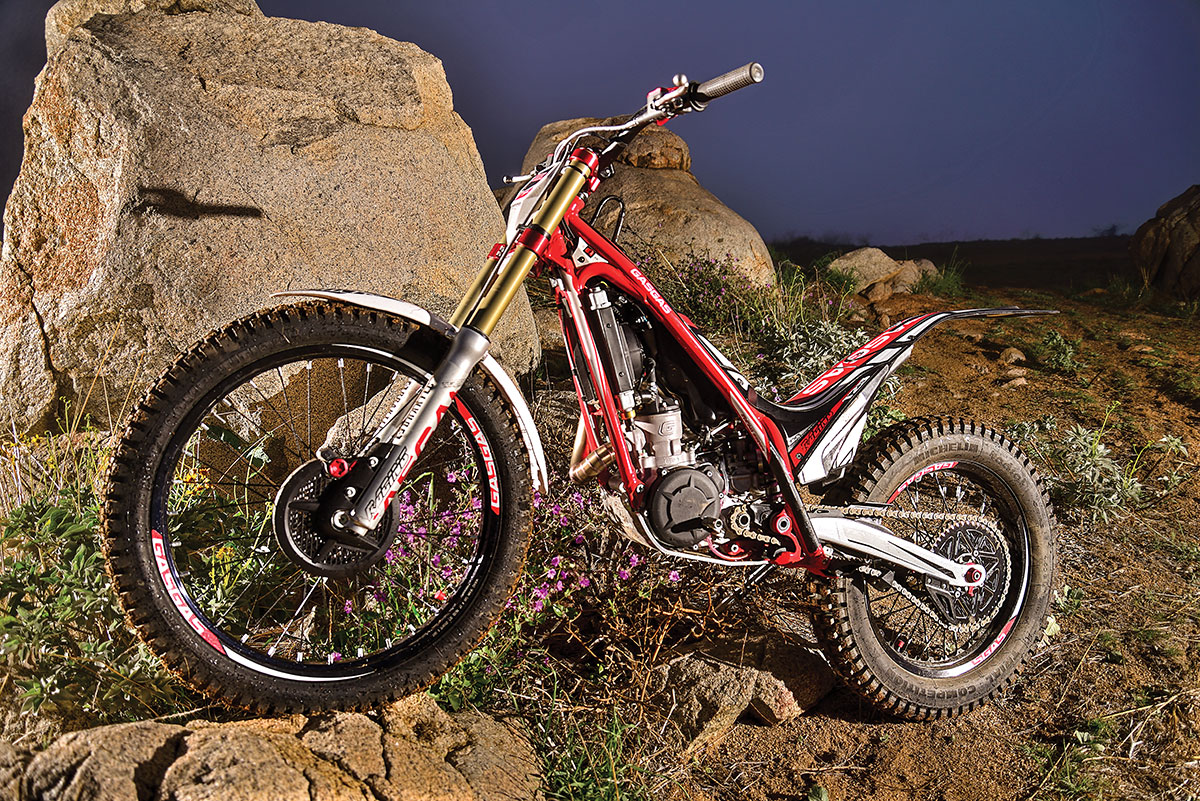 There are two very different schools of thought when it comes to the entry-level trials bike. One promotes the idea of making them as unlike trials bikes as possible. These bikes have seats, large fuel tanks and are designed for comfort on the trail. At the opposite end of the spectrum is the Gas Gas TXT School 125. This is an entry-level trials bike for riders who want to learn to do trials the right way. The layout is meant for the purist—no seat, minimal fuel capacity and a distinctive trials layout. There are two main reasons it’s considered a beginner bike. Up front, there’s the fact that it’s a 125 two-stroke. The power output is very modest, and the bike is amazingly light (around 148 pounds). The price is the feature attraction. The School sells for $5999, which is $2400 less than a premium trials bike.

SCHOOL ME
The target rider for this bike is the teenage kid who wants to learn the craft of trials. There’s very little that beginners should be doing in those early stages that requires 280cc of power. Adults can also fit on the 125, because the actual size of the bike isn’t that different from a full-size bike. There is, however, another bike in the Gas Gas line that’s more appropriate for bigger, heavier riders. The Contact 250 is an electric-start 250 that sells for $6299. Gas Gas is able to keep the price low on both bikes mainly because of less expensive components. The suspension on both ends of the School 125 is made by a company called Olle, as opposed to Ohlins on the rear of the 300 Racing and Tech in front. The School has Mitas tube-style tires, while the more expensive bikes have Michelin tubeless tires. The brakes are the same, though. They are made by Braketech, with a four-piston caliper in front and a two-piston one in the rear. The clutch is still hydraulically actuated.

CANS AND CAN’TS
If you want a low-investment ticket into the trials world, the School 125 is probably the approach that will provide the best results. Because of its smooth, mild power output, it’s the easiest bike for a legitimate beginner in a beginner section. It allows a rider to develop his technique and focus on doing things the right way. If the same beginner were to ride a pseudo trials bike with a seat and so forth, he would end up doing things in a totally different way that would probably end up meaning a lot more dabs. If, on the other hand, a beginner were to jump straight on a 300, he would probably spend more time attempting advanced sections and end up getting discouraged.

The 125 is very limited, though. It’s not a good trail bike because it runs out of power quickly on any steep hill. Chances are, you will wait too long to make the downshift, and the shifter isn’t exactly handy on any trials bike, so things can go wrong. The School isn’t a powerful bike by any yardstick.
Like any bike, the School 125 demands that you know what it is up front. Better yet, you should know what you are too. If the answer to both questions points in the same direction, the little Gas Gas is almost perfect.