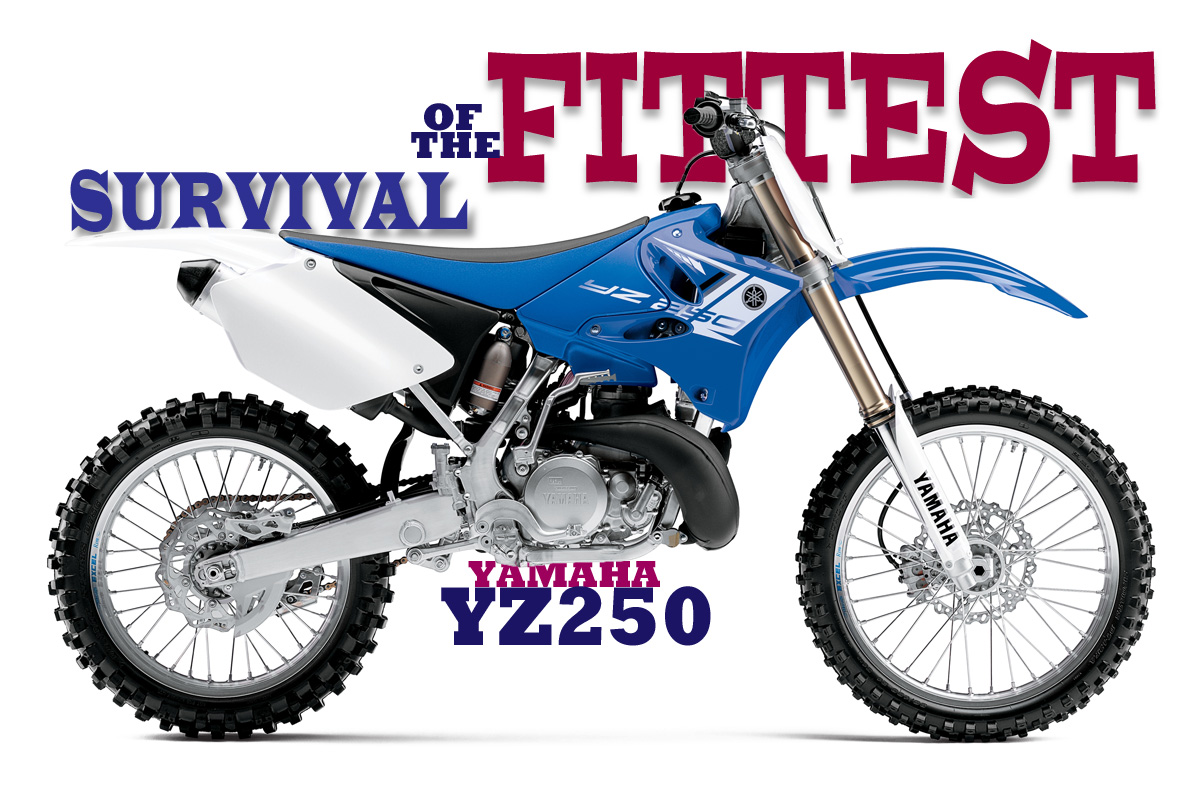 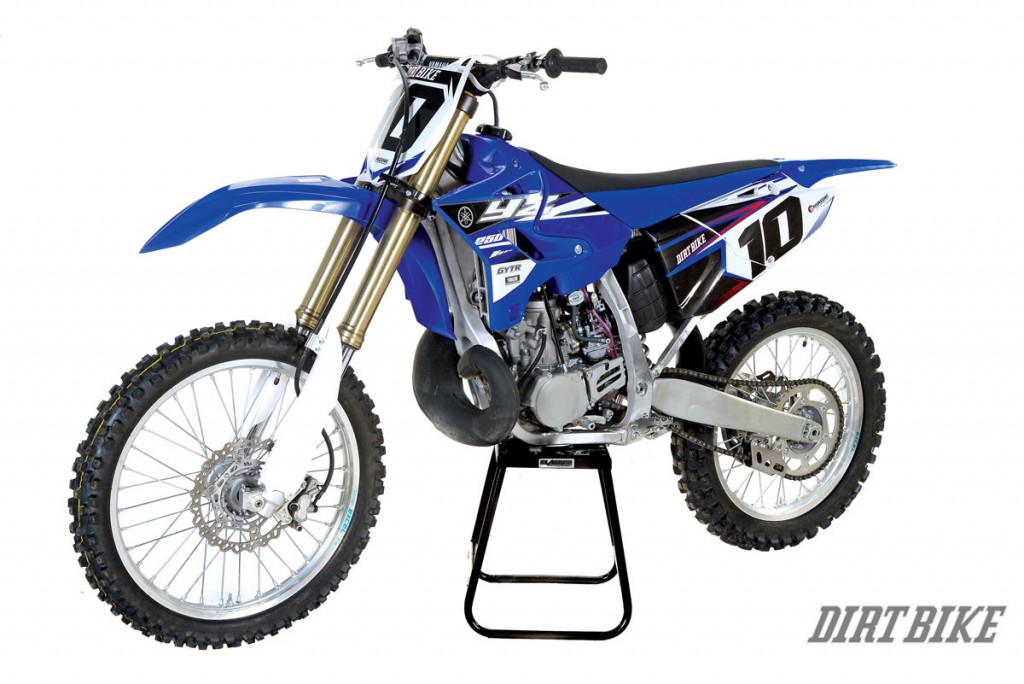 The history of the Yamaha YZ250 is the history of motocross in America. No other machine was the platform for so many world-shaking innovations. The list of firsts goes on and on: reed valves, single-shock suspension and power valves all started with the Yamaha. There’s no telling what the history of motocross would look like if not for the YZ250 and the people behind it. But it certainly would be very, very different.
On top of all the firsts, there’s a very significant last on the YZ’s resume. Today it stands as the last 250cc two-stroke from Japan. That makes

it the longest-running production dirt bike in the world–maybe even the longest running motorcycle model of any kind outside of Milwaukee and Russia.
Perhaps more than anything, the YZ250 is known for the legendary riders who used it to win. The list includes Gary Jones, Bob Hannah, Mike Bell, Ricky Johnson and Jeremy McGrath, to name a few Americans. In Europe, Hakan Andersson, Hakan Carlquist and even Danny LaPorte gave the YZ its early championships.

THE RECORDS
Perhaps one reason the YZ is so indelibly mixed with the history of American motocross is because it was developed here. The very first YZ didn’t come out of a well-lit R&D room at a Japanese factory. It was built in Southern California by Don Jones for his son Gary. Yamaha let the Jones clan go wild on the existing DT-1 two-stroke. The bike that resulted won the first AMA motocross championship, then was shipped back to Japan to become the first production YZ. Jones won two titles for Yamaha, the first of

which was taken from the Inter-Am series. In the meantime, the Monoshock rear suspension system was being developed in Europe by Hakan Andersson, who used it to win the 1973 250 World Championship. For a detailed account of that story, go to www.mxworksbike.com.
Pierre Karsmakers won the inaugural Supercross series for Yamaha in 1974, but the next American YZ250 champion didn’t come along until 1977, when Bob Hannah moved up to the 250 class and utterly dominated motocross for the next three

years. In that time he won three Supercross titles, two outdoor championships and had a 22-

moto win streak. This was, of course, the height of the works bike era, when factories were spending hundreds of thousands on exotic factory bikes. But Yamaha made a point to race production-based bikes at certain times in this period, both with Hannah and later with Rick Johnson.
After Hannah broke his leg at the end of the 1979 season, Mike Bell won his lone Supercross title in 1980, Broc Glover raced and won on the 250 from time to time, although he was more closely associated with the YZ125 and YZ490.
Rick Johnson’s success was legendary, but only the early years of it were with Yamaha and theYZ250. After he left, there was a void left that didn’t get filled until Damon Bradshaw came along. The most striking thing about

Bradshaw’s career was his ability not to win championships despite winning races. He still sits in eighth place on the all-time Supercross win list, but doesn’t have a single national title to his credit.
Jeremy McGrath is probably better known for his years at Honda, but in 1998, 1999 and 2000 he won Supercross titles on a YZ250. In that time his closest rival was fellow Yamaha YZ250 rider David Vuilliman. The last National Motocross Championship to be earned by the YZ was the 2004 Supercross title with Chad Reed.

OFF-ROAD
The Yamaha YZ250 was and remains a bike held in high revere by both the motocross and off-road communities. In fact, no other bike has proven so capable in

both worlds. It has won three GNCC championships with Ed Lojak, Fed Andrews and Barry Hawk. It won two National Enduro titles with Randy Hawkins and Ty Davis; three WORCS championships with Davis and Nate Woods; seven National Hare Scrambles Championships with Jason Raines and Doug Blackwell, and it even contributed to a National Hare and hound title with Ty Davis, who rode the 250 in select events.
If you go strictly by the numbers, the YZ is more of an off-road bike than a motocrosser. It has 15 off-road championships and only 14 motocross titles. Add them all up and the YZ is the winningist cross-platform racer in America.
THE YEARS
1968: Yamaha introduced the DT-1 250 two-stroke and everything changed. Before that, no one would consider racing a Japanese bike professionally. Even though that first model was no racer, it became a platform for various racers because it was light and reliable. European motocross bikes would still rule, but their days were numbered.

1974: The first YZ250A was introduced. This was based on the bike that Gary Jones had used to win the 1971 National Championship, which was actually derived from his Top American status in the Inter-Am series. According to legend, Don Jones had shipped the bike to Japan with “A2Z” written on the tank, meaning it had everything modified from A to Z. Jones had made a new frame, cast his own engine cases and strapped on a CZ alloy fuel tank with bridal tack. When the bike arrived, it was redesignated the YZ because all Yamahas models began with a Y. But it was remarkably true to what Jones had built, right down to the strap on the tank.

1975: Yamaha’s other development program was taking place on the European front with Hakan Andersson. Andersson started the 1973 season with a works version of the YZ, called the OWXX. But at the third race in Belgium, he debuted the OWXX Monoshock and won. That bike, in turn, was the foundation for the 1975 YZ250B and its Monoshock rear end. It was far and away the best bike of its day, but things were changing so rapidly that it was totally redesigned the very next year.
1976: Prior to this point, Yamaha had two dirt bike lines: the YZs and the lower-priced MXs. In 1976, the two were merged. More accurately, a YZ logo was suddenly painted on the MX250’s gas tank and the price was increased. It was a corporate cost-cutting measure. Purests bemoaned the loss of the ultra-light YZ250, which was virtually a works bike. In truth, the 1976 version worked just as well as its predecessor despite the additional weight, but the Europeans were catching up, and Suzuki unleashed its RM250 bombshell. This was the year of the fork canisters that looked like a speedo and tach.

1977: Yamaha caught back up quickly. A whole new bike was released with a super-small motor, a lighter frame, and more travel. The fuel tank was plastic and the swingarm was steel. The 1978 model looked almost identical, but had more travel and an aluminum swingarm. Bob Hannah was in the middle of his win streak at this time, and Yamaha would raffle off his production bike to the public after each race.
1979: This was a stand-alone year for the YZ250. The 1979 model got a different look and a motor that was abandoned after one year.

1980: To this day, the YZ250s of this period are highly regarded and sought after. Suspension and power were excellent and the 1980 model was almost identical to the 1981 version, aside from the gearbox, when went from a six-speed to a five-speed.
1982: Everything changed, and not necessarily in a good way. The 1982 YZ250 was a technological milestone. It was liquid-cooled with the radiator mounted on the forks. It got the first production power-valve and it got linkage between the swingarm and shock. Almost all of these measures were ineffective and redesigned later. The radiator location had a bad effect on handling, the shock was enclosed where it could get no air flow and the power valve was located so far away from the piston that it had little effect.
1983: Yamaha started to iron out the designed of the previous year. The radiators were relocated to the frame and the shock was moved halfway down to the swingarm. These little changes continued in 1984 and 1985, but Yamaha was dipping rather heavily into the snake-oil, with features like the BASS valve on the shock and the Boost Bottle. In that last year, the yellow and black color scheme disappeared, and from that point on, U.S. models were white just like their European counterparts.

1986: This was another complete redesign. The ‘86 Yamaha got a new chassis and body work and most of the motor’s internals were massaged. The front brake was hydraulic. The most important of all the changes was the relocation of the rear shock. From this point on, the Monoshock rear suspension would be called motocross, but it was essentially the same as that of a Honda, Suzuki or Kawasaki. The advantage of having the first single-shock rear end was long since forgotten. After this, there was a long period of minor change. The years of complete bottom-to-to redesigns were at an end. But the motor gained massive low in power in 1987 and yet another set of body work in 1988.
1989: The Kayaba fork was inverted, which launched years of controversy. To this day, many insist that the old-style fork with the inside tube on top was a better design. No matter; the inverted fork would stay, although it would improve greatly over it’s debut in ‘89. For the next few eyars, Yamaha made dramatic changes to the YZ’s appearance. It got new plastic in ‘93 and turned purple in ‘94. But the most significant change was the new top-end in 1995, with a new power valve that looked like a huge tumor on the side of the motor. In these years, Yamaha was loosing the horsepower war to Honda, but making steady gains in the suspension department.
1996: Everything except the motor changed in 1996. The frame was redesigned, and between new bodywork and a new color, the YZ got a new identity. The annual changes in color stopped and from this point on, Yamaha would be known as the bike in blue. The motor, however, was still a weak point.

1999: Yamaha finally got sick of being the opposite of fast in ‘99. The old motor was entirely tossed out. The YZ powerplant hadn’t received this much attention since 1992, and it probably hadn’t received this much improvement ever. The bike’s throttle response and fun factor increased significantly. For the next few years, Yamaha refined the motor in small ways, but it’s essentially the same today.
2002: The YZ’s frame was next on the hit list. The chassis got a remake in 2002 with slimmer bodywork and a new airbox. By this time, more and more development resources were being diverted to the four-stroke projects.
2005: Yamaha gave the YZ250 one last present before turning out the lights in the two-stroke R&D department. The YZ got an aluminum frame. It’s interesting to note that Yamaha had been testing aluminum as a frame material for a long time–even predating Honda’s 1997 CR250R. When aluminum finally came to the entire YZ line, Yamaha used a conventional backbone layout instead of a perimeter design. The test riders were doing whatever it took to make the new frame handle like the old one. Since then, Yamaha switched to a perimeter layout for the four-strokes, but the YZ250 and 125 frames were unchanged. In 2015, Yamaha gave both the YZ250 and 125 a new look and revised suspension. 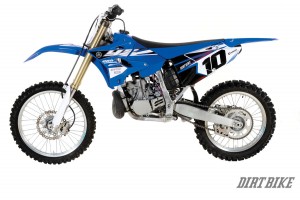 STILL THE ONE
Today, the Yamaha lives on but its future is unclear. It still sells enough to justify its place in the line, but currently, not even four-stroke sales numbers are very impressive. When the market recovers, no one can say if the two-stroke will survive. But if one bike deserves to carry the two-stroke flag, it’s the YZ.