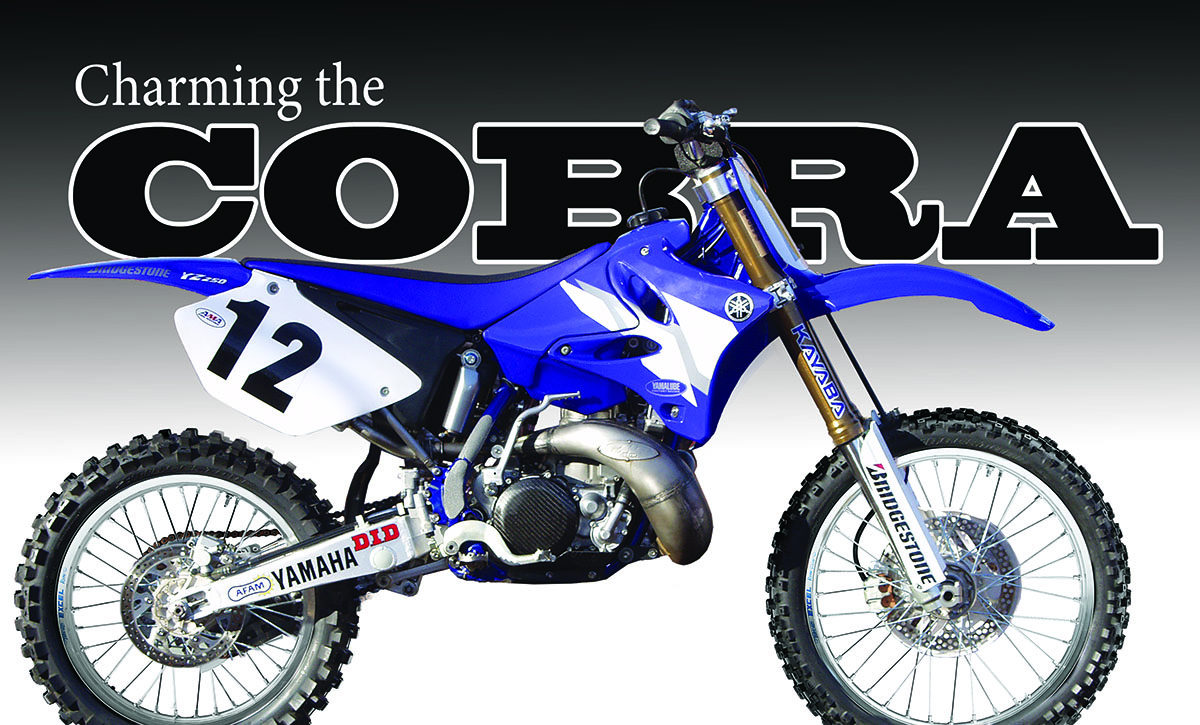 December 19, 2001 was supposed to be one of those dream days that comes occasionally in the life of a journalist. We got permission to ride David Vuillemin’s Factory Yamaha YZ250 prior to the opening of the Supercross season. It should have been an epic day to remember, but it ended in a disaster that I would rather forget.

David Vuillemin was Yamaha’s Next Big Thing in 2002. The McGrath era was coming to a close and everyone was wondering if anyone could deal with Ricky Carmichael. Vuillemin had as good a chance as anyone. He was crowned the King of Bercy in the off season. He led the French team to victory in the 2001 Motocross des Nations. And then he started 2002 by winning Anaheim One. If there was an R.C. anti-venom, the Cobra looked like it. At the end of ’01, he was riding a bike based on the 2002 production bike, which had a new chassis that year. Both Vuillemin and McGrath had logged a lot of hours at the test tracks developing the bike, and the reports were that it was getting better and better. Yamaha didn’t build its works bikes in Japan, as many of the other factories did back then. Yamaha Motors U.S. simply ordered some engines and 100 unpainted frames and swingarms, then got busy at the race shop in Cypress, California. The engines were disassembled and blueprinted, then rebuilt with a mixture of Yamaha Japan (YMC), YMUS and aftermarket components.

Bob Oliver was the motor man, and he modified the factory cylinder, head and reed block. The crank was OEM YZ250, but the transmission had special YMC parts that moved first and second gear ratios closer to third. YMC also provided the programmable ignition, which didn’t have a high-low switch. There was an ignition button on the bars, but it was for downloading data and resetting, not toggling. The ignition was wired to a gear-selection sensor but not a standard TPS, as the stock Keihin was replaced with a factory PowerJet Mikuni. David used an FMF pipe with a Pro-Circuit silencer, something that would be unheard of today. Team bikes got aftermarket clutches (Hinson), chains (D.l.D. ERT), sprockets (AFAM-14/51), filters (UNI) and engine covers (DSP carbon). Oliver and Craig Monty then tuned the motor to be rich off of the very bottom and very crisp on top. “If it’s lean on the bottom,” explained Steve Butler, “the bike can do unanticipated things on the face of jumps. Making it rich smooths it out some and gives the rider more confidence.”

So, just two weeks before A1, Yamaha proudly brought out the factory YZ250 and the YZ426 to the short-lived Saddleback II lakeside track. We brought out the whole crew. I was there with Lumpy, Chris and test rider Garritt Ordelman. Garritt was the first man to try the bike. He reported that the motor was super fast. It came on instantly and with authority, but he said he wouldn’t really call it a hit. It was more of a launch, like a rocket. Power kept on ramping up, revving higher and higher. 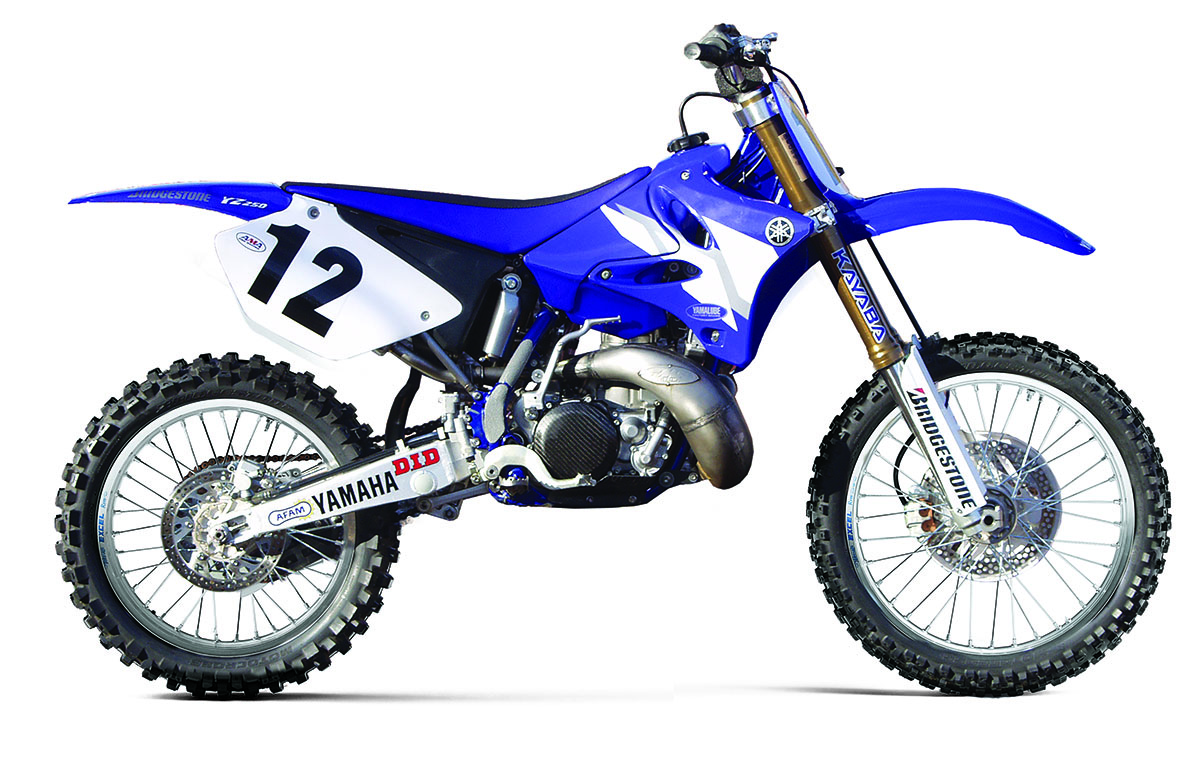 When we finally got Garritt off the bike, I was next. I was almost drooling. Saddleback was such a crowded track in those days that you almost had to merge in like a freeway on-ramp, and you had to hit  the first jump without backing off or you would get run over. The first 30 second on the bike were among the most horrifying in my life. The controls were all pitched up so high I couldn’t operate the clutch or front brake. The bars were like steer-horns. And to top it off, the bike was sputtering so badly that I thought it was fouling a plug. Everything about the bike was intimidating. When the motor cleaned up, it hit hard. When it was time to stop, the works Nissin brakes were ultra touchy. And to top it all off, it had Supercross suspension. Oddly enough, that was one of the few things about the bike that I was fine with. It was stiff, but still worked surprisingly well. It turned out that Vuillemin’s setup was an acquired taste. According to Steve Butler, David liked the rich low-end jetting because he felt it subdued the hit. In truth, I don’t think that he ever rode it in that zone. The bars and levers were positioned, he said, so that they wouldn’t get in the way when he was doing stoppies.

In the course of the day, we were allowed to adjust the bike to our liking. I never felt comfortable on it, but I at least got to the point where I could get around the track with the flow and hit all the jumps. Lumpy took his turn after me and had the same thoughts. At the very end of the day, Chris asked if he was going to get his turn. It was a tough call. Chris wasn’t an experienced rider, and Vuillemin’s bike wasn’t what you would call an entry level machine. I said yes, anyway. I would regret that.

A half hour later, Chris was on his way to the hospital with a compound tib/fib fracture. He spent more than a month there, fighting a severe infection, and he would never come back to work. That day was the end of his career in motojournalism. The resulting workman comp claims took years to resolve and resulted in policy changes for both Dirt Bike Magazine and Yamaha. I’m not sure if David V. knew about all the carnage. He left earlier in the day. He would go on to finish second in the Supercross series before injury shortened his outdoor season. It was still his best year in America. He, apparently, loved that bike. For me, it was further proof that I was never cut out to ride Supercross–or even Supercross bikes.