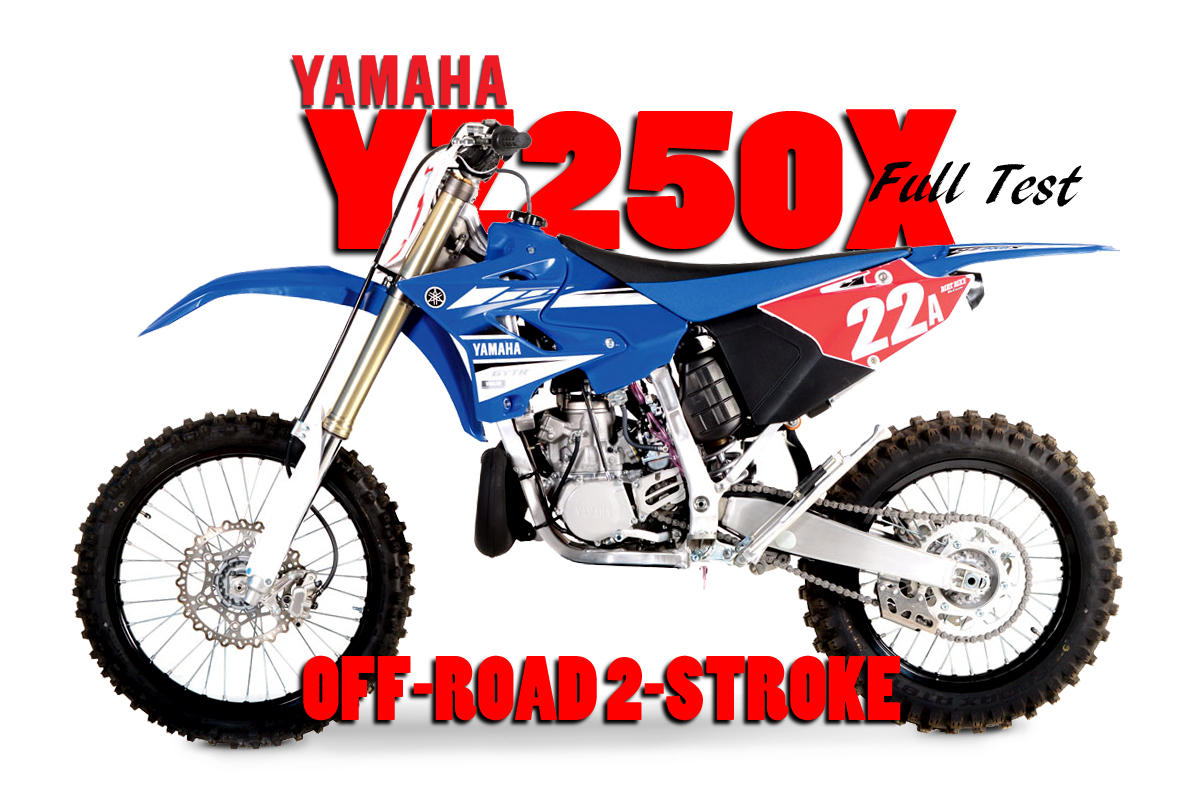 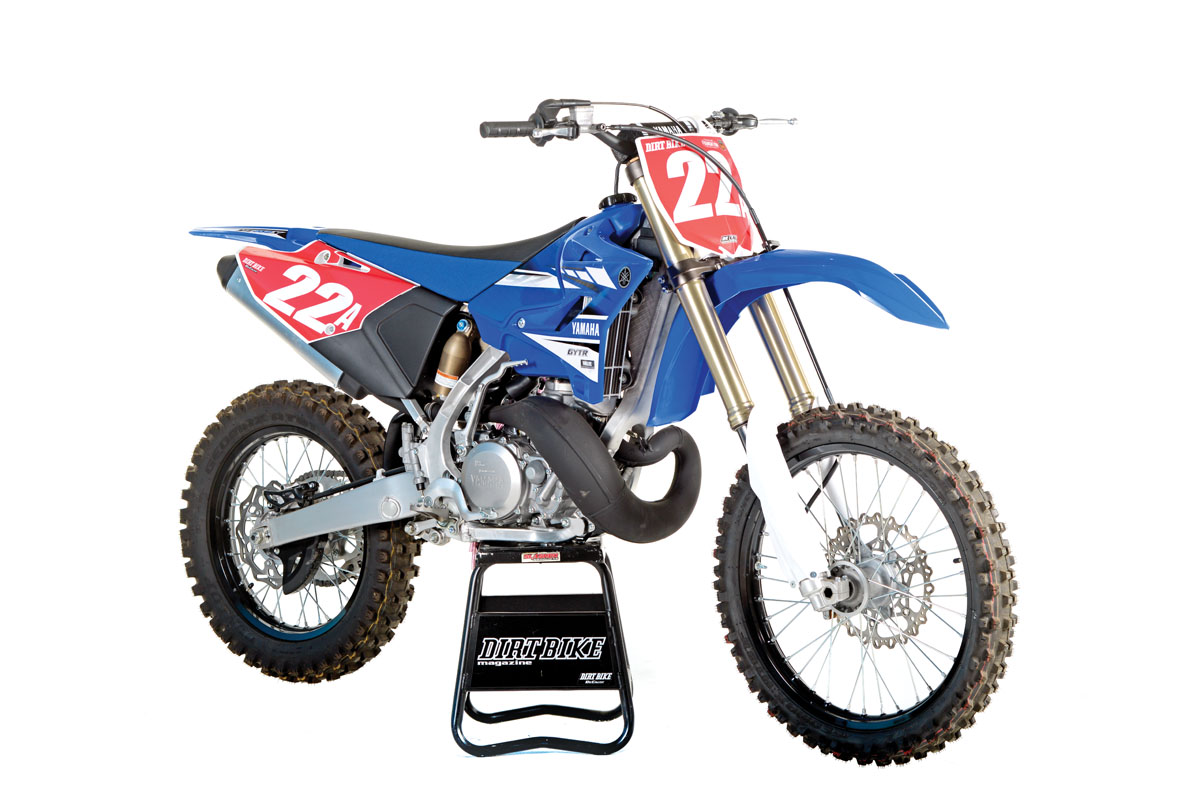 In 2016 Yamaha did it right with the YZ250X. Unique among the Japanese manufacturers, Yamaha was the only company to offer a closed-course, motocross-based, two-stroke, off-road machine. Yamaha took its incredibly ageless YZ250, gave it the bare-bones necessities to meet the basic requirements (18-inch rear wheel, sidestand), and then massaged the powerband to make it smoother and more tractable. Then Yamaha took the KYB suspension and gave the dampers manners that changed the YZ250X into a very effective off-road machine. For 2017 Yamaha kept its hands off the machine, fitting it with one update—a larger 270mm front rotor. Then Yamaha thrust it into a market dominated by Austrian-built super-two-strokes. 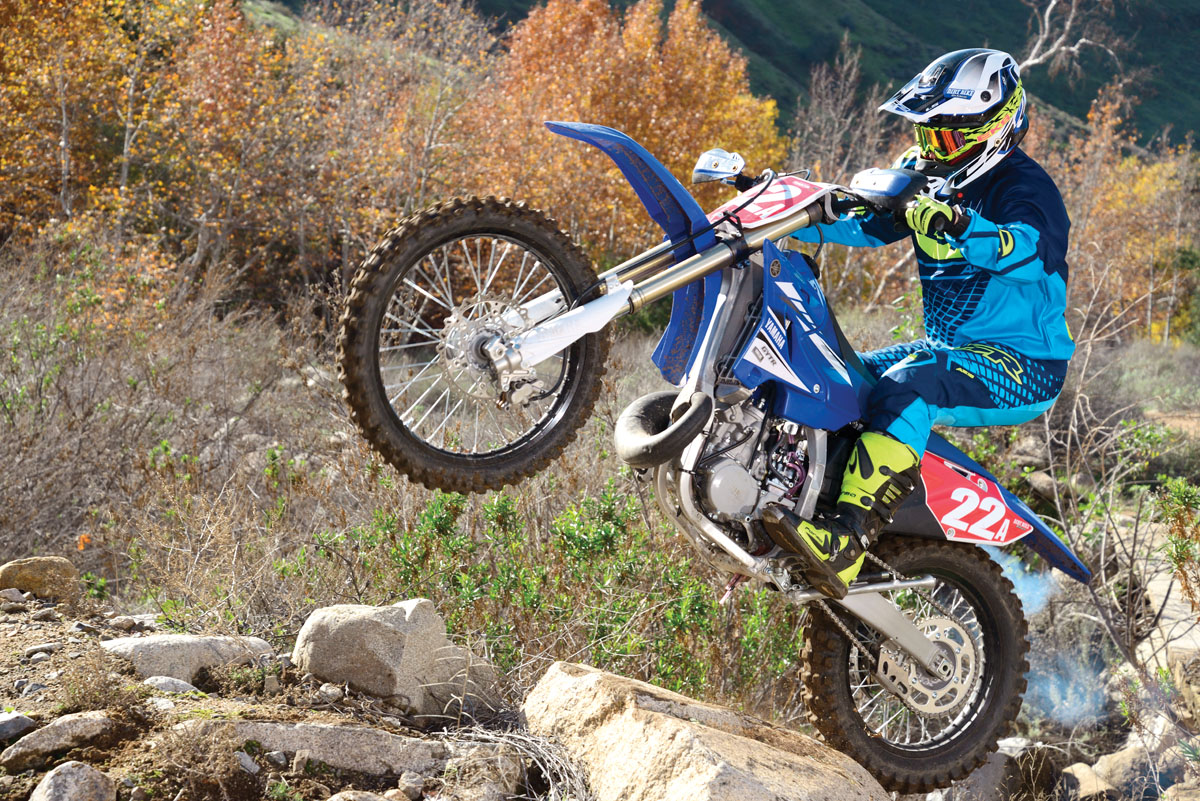 LOOKING AT THE SKELETON
The engine has been around since 1999 and is water-cooled, power-valved and Keihin-carbureted. The transmission is a five-speed, and it’s a kicker, meaning there is no magic button. But inside that well-worn engine design are new X-engineered parts in the CDI, a totally revised head, an off-road-focused YPVS (Yamaha Power Valve System) power valve, a modified transmission, an exhaust pipe and a new clutch. The cylinder head volume was increased from 21.5 cc to 23.6cc. The compression ratio was reduced from 8.9:1 to 7.9:1, and the exhaust port was raised 0.5mm. Complementing these mods is a new (for 2016) power valve shape that matches the exhaust port to the YPVS. Increasing the rideability of the normally hard-hitting YZ engine are CDI revisions that smooth out the powerband and work in unison with the power valve and head changes.
Yamaha fit the X with new transmission ratios that target off-road. The wide-ratio unit has the same first and second gears as the motocrosser but has a lower third gear and wider fourth and fifth gears. Fourth gear is slightly taller than on the YZ, and fifth gear is definitely on overdrive and equal to dropping five teeth on the rear sprocket. A big difference on the MX version compared to the X is that Yamaha reduced the spring rate on the clutch by 10 percent, making for a much softer clutch pull.
The frame remains a mixture of aluminum forgings, casts and extrusions (as it has been for ???? years), and the fore-and-aft dampers remain Kayaba. The fork is a spring model, using speed-sensitive damping with damping and spring rates set for off-road riding. Same goes for the shock, which also appears straight off the motocrosser but is fit with a spring rate and valving with a heart for trail carnage and for maintaining traction in rocky conditions. Yamaha fit the X with Dunlop AT81 rubber and an O-ring chain. And while the gas tank is a stock MX size, the petcock has a reserve mode, whereas the motocrosser does not. 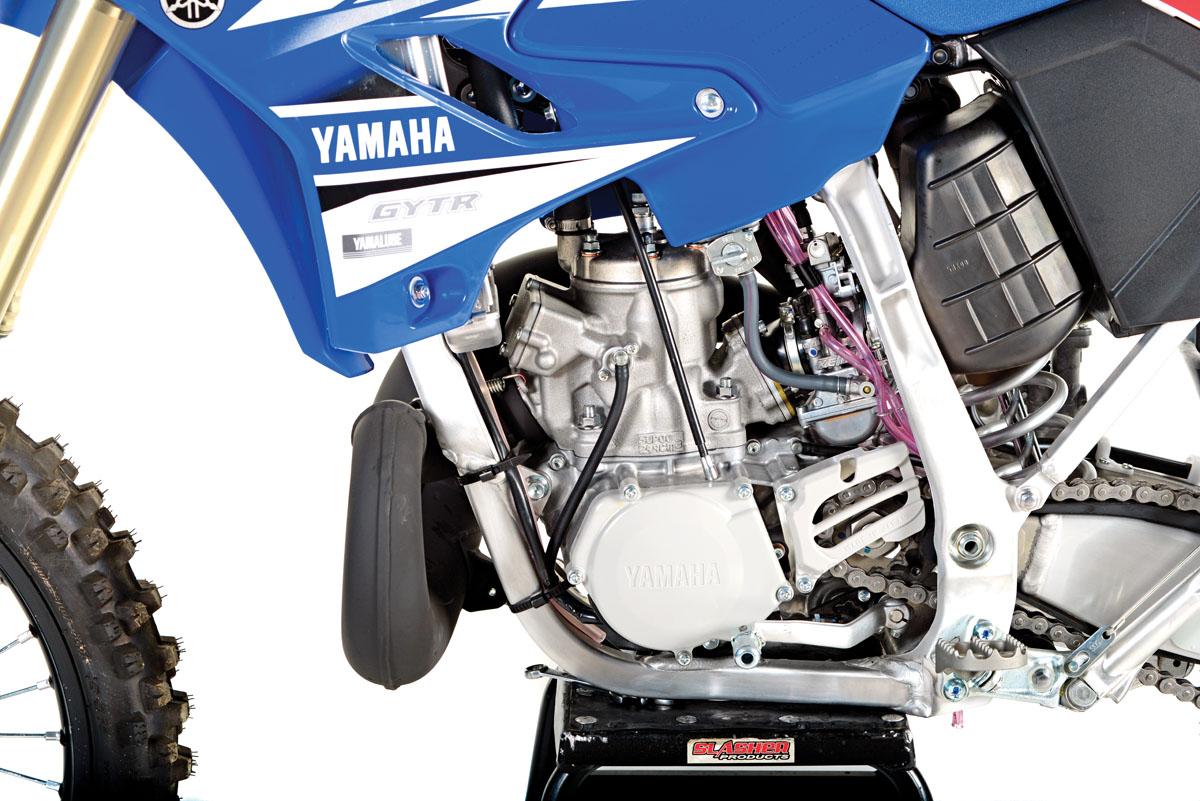 ON THE TRAIL
Right away we noticed the compact feel of the chassis and ergos. For riders familiar with KTM/Husky ergos, the YZ250X tends to feel cramped. The bar bend is comfy, but the seat-to-peg height is tighter than on the Austrian machines. Our first test day was a cold morning, but we yanked the choke up and the bike fired on the first kick. The kick-start lever feels long and allows for lots of leverage, so the X starts quite easily. We credit less compression and perfect jetting. Hitting the hills demonstrates that the X is all about smooth power and is nearly hitless. It definitely has meat to the powerband, but it lacks the violence of the YZ. The gearbox is a perfect combo of ratios for a five-speeder (third gear being tight) and matches nicely to an overdrive fifth gear, which gives it a versatile appetite for off-road.
The clutch pull is very smooth and effort is light, especially considering that it’s cable-actuated. Our testers (size 11s) felt that the shift lever was short, putting the tip too far away from the toes of their boots. Engagement is positive, with first being low enough to make pulling away from a standstill effortless. First gear runs out fairly quickly, with second and third being used the most. There were some issues making quick shifts, both up and down. It felt like the tranny didn’t like being shifted when it was under a load, but possibly it just needed more break-in time. The spacing of the gears is well matched to the powerband of the motor.
With a motor that emits great bottom and mid thrust, the low-end grunt made it easy to work those super-tight ravines that we crave. With the light clutch pull, the Yamaha makes you feel like a hero fighting for traction and puts very little stress on the pilot, since managing power is never a case of keeping it in the meat of the powerband. In the tight stuff, it’s always in the steakhouse. Once the terrain opens up and the hills get long and vertical, the lack of a hit and real punch tend hurt your ability to stay in a high gear and you find yourself riding and screaming.
The feeling that the chassis is compact vanishes after some quality trail time. In super-tight gullies where the trail is wickedly random and thin, the handling is magic. The bike changes directions extremely easily, and the front end goes where you point it. It has poise and feels planted, which means the wheels hook up; the front end doesn’t tuck or push. In comparison, the KTM 250 feels long and slow to change directions with a vague front end.
Yamaha has done a nice job of targeting suspension valving that has the ability to chew on a variety of dishes in the off-road environment. Both ends are quite plush-feeling and progressive. The suspension absorbs hack, rocks and roots nicely. The X takes big hits with little stress. The only complaints came from riders who tip the scales over 185 pounds. They need stiffer springs, both fore and aft, but other than that, the YZ250X suspension hits the mark nearly dead-on. 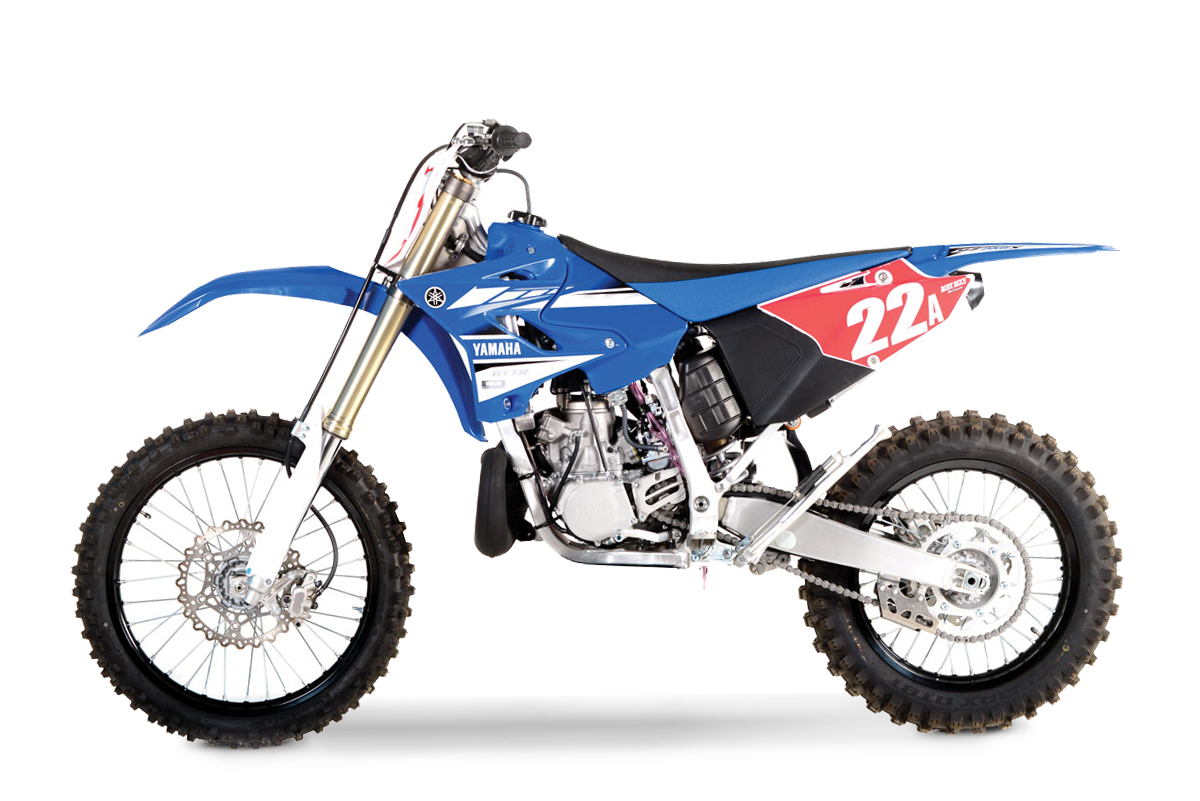 OTHER NOTES
• The new front brake is a huge improvement. The larger 270mm rotor improves the power, and it retains good feel. The Dunlop AT81s work well in rocky, traction-less terrain and can still hold a line in more intermediate dirt.
• Thanks for the O-ring chain. It only required one adjustment and little maintenance. The 50-tooth rear sprocket worked well gearing-wise, but plumper pilots preferred one tooth larger. While the sidestand appears a little cumbersome, it worked perfectly and was never offensive
• It needs a larger fuel tank! Carbureted machines don’t really get good fuel economy, and the X is good for 35 miles, maybe, in thick dirt or sand. For some reason, Yamaha did not equip this bike with handguards. This makes no sense to us. And, finally, if you plan to ride on any off-road trail that requires a spark arrestor, you’ll have to buy one since it comes with a straight-through MX muffler.
DIALED AND STYLED
Yamaha was the first of the Asian brands to embrace the closed-course off-road machine. Yamaha now has a full line of four-strokes in the FX250 and FX450, both of which target KTM’s stranglehold on the market. There is no doubt that the two-stroke Yamaha YZ250X is one of the top machines in the motocross-based off-road world. Handling and suspension rate very high, and the power is smooth, long and broad. It does lack some of the goodies that we demand on an off-road machine, but it also sells for $1400 less than a KTM 250XC. Overall, it has persuaded a big chunk of our testers, who are off-road-biased, with traits designed for exploring ugly terrain.