Flooding from heavy rains that didn’t let up until an hour before the start of the Moccasin Creek Full Gas Sprint Enduro in Blackshear, Georgia, forced sections of the course to be modified and shortened, however, round two of the Kenda Full Gas Sprint Enduro Series went off without a hitch as Kailub Russell claimed his second win in as many races.

The FMF KTM rider turned in an error-free two-day performance that saw him win seven of the 12 tests and finish 19 seconds ahead of second place finisher Josh Strang to claim the overall victory. Shorter tests meant shorter test times, which led to extremely competitive races, as the top handful of riders in the pro class (and in all of the classes, for that matter) turned times that were closer than usual. Despite the close racing, Russell extended his lead in the championship standings with his win, and now sits seven points ahead of Strang (55 to 48), with Toth in third with 41 points. 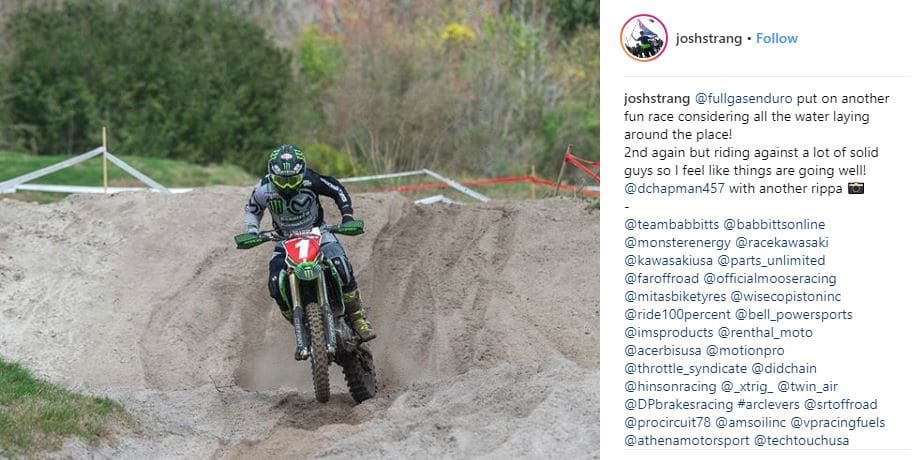 Strang looked strong in his second race aboard the Babbitt’s Monster Energy Kawasaki, the Aussie off-roader managing a test win on each day. “The times were pretty close between the top five or six guys, so there was little room for mistakes,” said Strang. “Unfortunately, I had a couple of silly ones on Saturday and that was frustrating, but overall the weekend was good.”

DuVall fully committed to riding the entire 2019 Kenda Full Gas Sprint Enduro schedule coming into the Georgia race and demonstrated his intentions of being “all in” by taking a test win on Sunday en route to third overall. The Rockstar Energy Husqvarna rider finished just 13 seconds out of second and stayed close to Russell and Strang all weekend. Thad mentioned on his social feed that he had been riding the “struggle bus” on Saturday, but that he got things under control on Sunday to edge out Strang for second on the day.

FMF KTM’s Josh Toth won the final test of the weekend en route to fourth overall. The Pennsylvania rider was just nine seconds out of third on Sunday and like DuVall, was able to pick up the pace on the final day of racing. Toth is still adapting to the sprint format but is showing progress with each round.

2019 HAVASU WORCS: THREE IN A ROW FOR TAYLOR ROBERT