2019 HAVASU WORCS: THREE IN A ROW FOR TAYLOR ROBERT 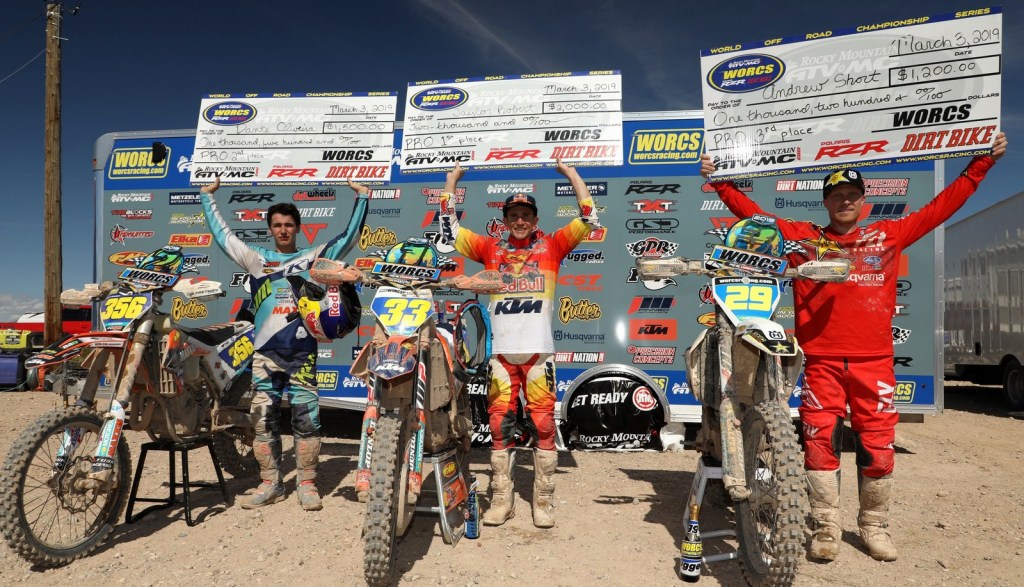 After the last three races in the Rocky Mountain ATV MC WORCS Series Presented by Polaris RZR and Dirt Bike Magazine, one has to wonder what the last few years would have been like if Taylor Robert hadn’t gotten hurt early in the season. We’re witnessing that now as Robert won his third consecutive race in the Pro class at the most recent event at the Crazy Horse Campground, and he’s showing dominance in every facet of his racing program. 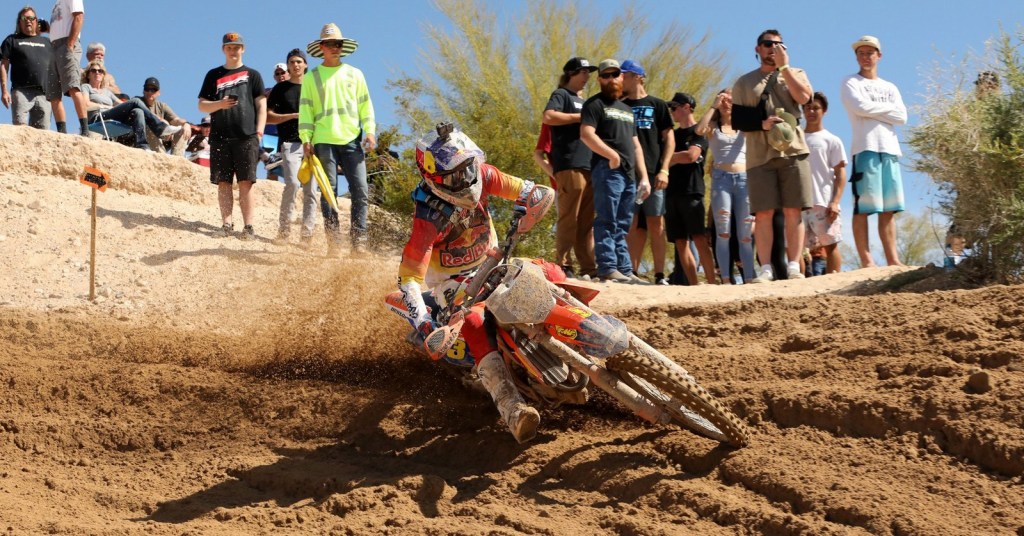 Robert beat out a charging Dante Oliveira to take the runaway victory. Both were riding KTMs. Andrew Short finished third on a Husqvarna, followed by Gary Sutherlin and comeback kid Ricky Dietrich. Austin Walton won his first WORCS event in Pro 2, and Tyler Nicholson scored his first Pro 2 Lights victory.
Beautiful weather with temperatures in the mid-70s and partly cloudy skies made for perfect racing conditions. Another huge turnout demonstrated the continued growth in the WORCS motorcycle classes. All of the major factories were here and many of the top riders were in attendance.

Zach Bell took the early lead from a bobbled start, but Robert was close behind, following his lines. Bell began to fade early in the event and Robert capitalized, taking the lead and then running away for the victory. Though he has dominated the series, Robert was quick to point out just how competitive WORCS motorcycle racing has become this year, especially in the Pro classes.

“I followed Zach for a couple of laps and learned his lines,” said Robert. “I don’t know what happened to him, but he started fading so I rode around him and that was the last I saw him. It’s been a great start to the season. I’m feeling healthy and strong and I hope to keep the momentum going. I’ve been in the series since 2005, and it seems like we’re really starting to grow again. All the top manufacturers and the top pro racers are all out here. It’s awesome.”

Robert missed this race for the last two years due to injury and hadn’t been to Havasu since 2013. This season, Robert has been healthy from the start, and should he stay that way he’ll be hard to catch. With three consecutive dominant victories, Robert holds an impressive 15-point lead in the championship standings.

“It felt good to finally get back here and get a win,” said Robert, who interestingly also won the race here in 2013. “The lagoon jump got gnarly because there were so many lines going through there. You had to commit and go for it every lap.”

Oliveira continued to impress here, riding a perfectly smooth and consistent race. After riding with Short early in the event, he took over second and then started just clicking off smooth laps. He rode so well that he had time to pit on the final lap to top off his fuel tank and get some water. 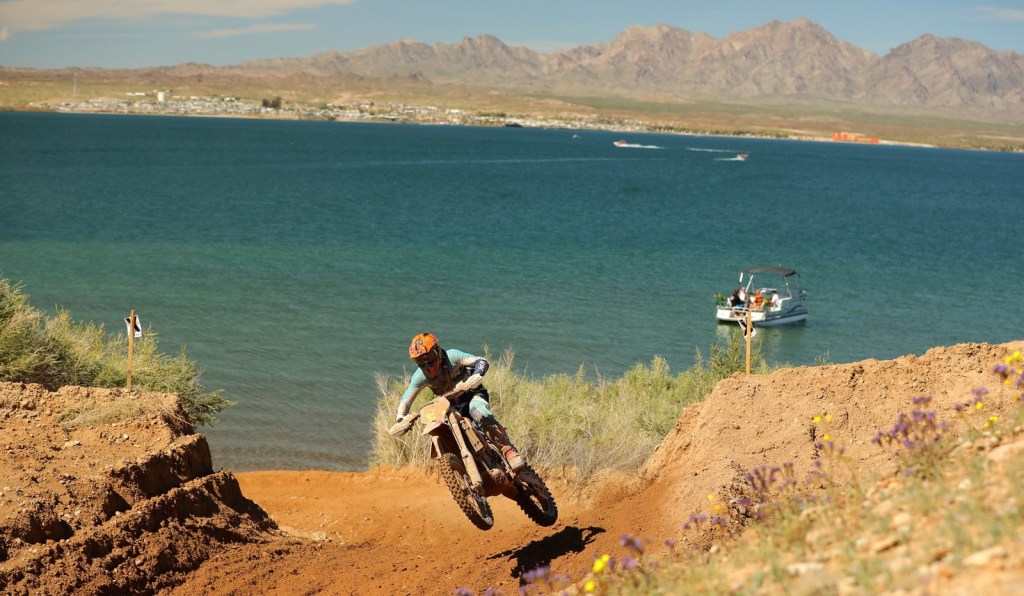 “I think that’s the smoothest I’ve run at Havasu,” said Oliveira. “I made a couple of moves early and rode with Shorty for a little bit. I got past him and caught up to Zach before setting a pace behind Taylor.”
Short was making his Havasu debut during the weekend and finished a strong third. Eyeing the lagoon jump before the race, Short didn’t realize just how tough Havasu can be on both rider and motorcycle. He learned quickly that Havasu always lives up to its hype.

“I had always heard it was rough here, but it was really rough,” said Short. “I laughed at the lagoon jump when I saw it and I said: ‘This thing is not that big.’ Then, on the last lap, I was debating whether to jump it or not because it was so gnarly. I thought I’d be a little more competitive, but we’re working on it and we’re building. Zach and Taylor are really fast. Dante is really impressive. I think I underestimated the competition a little bit and it’s a tough series.”

Sutherlin nearly took the holeshot at the start, but admitted to having an off day on his KTM. Though he salvaged a fourth-place finish and is hoping to rebound at the next event, Sutherlin was disappointed with his results.

“I got a little arm pump early on and I just didn’t ride that well, I wasn’t charging like normal and it just wasn’t my day,” said Sutherlin. I missed the podium and I’m pretty upset about that. I put a lot of effort into this race and it didn’t show.”

Dietrich scored his second fifth-place finish in a row on his Honda. Dietrich is continuing to get back into the swing of Pro racing after taking a six-year hiatus from competition. While he’s pleased with his consistency, he’s longing for the podium. “Fifth is my spot right now and I’m OK with that, but I want to be on the podium,” said Dietrich. “It’s a building process and we’re close. This race was better than the last race. I truly gave up racing for six years, so it is a unique thing that I’m doing. So I have to easy on myself and each race we continue to get better.” 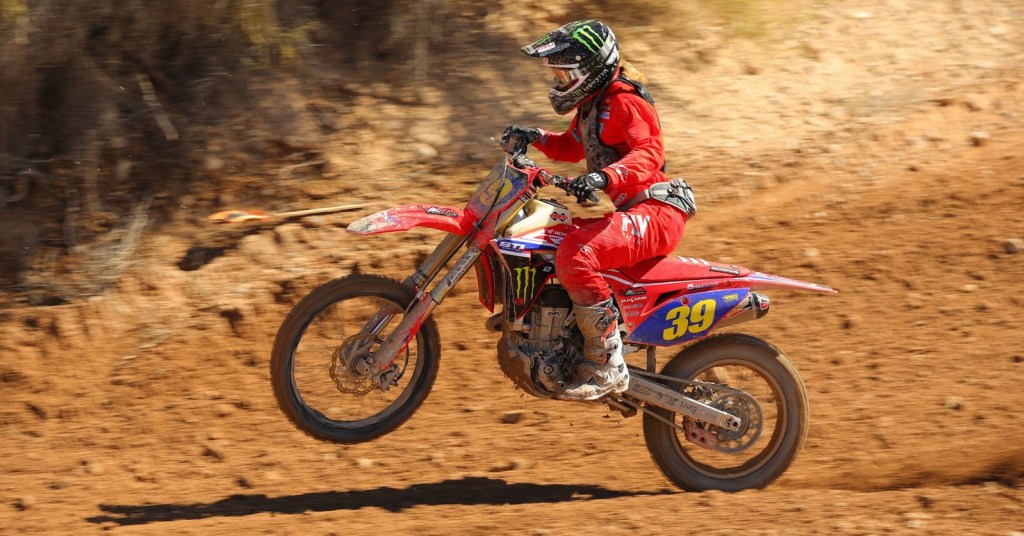 In Pro 2, Walton took advantage of a mistake by Clayton Hengeveld early in the race and took the lead on his Husqvarna. From there, he stayed consistent and scored the victory, his first ever in WORCS competition, and in his first race at Havasu. Walton said he enjoyed the time off between races that is afforded by the revamped schedule. 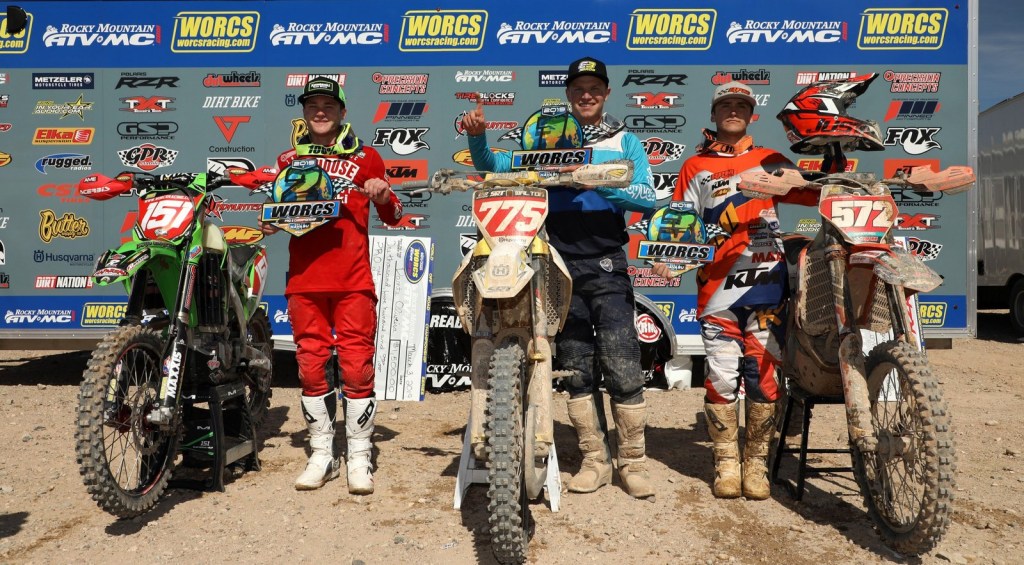 “It was nice having the long breaks between the races because I’ve been able push a little harder in the gym and riding the bike,” said Walton. “You can’t beat this. This is one of the coolest races I’ve ever been to. I was staying consistent when Hengeveld made a mistake and going down. I capitalized on it and rode my own race.” 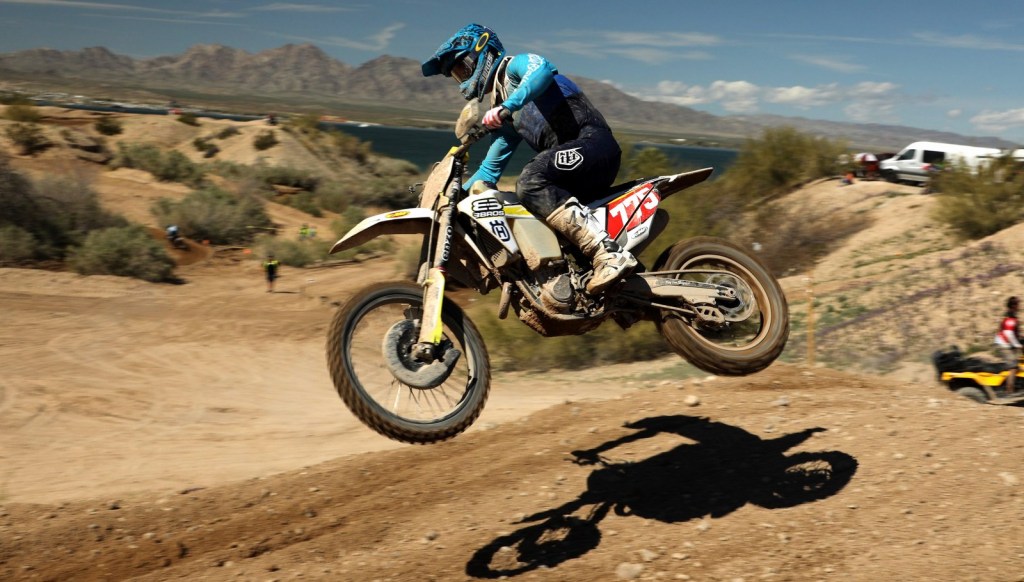 Hengeveld got a good start on his Kawasaki and took the lead exiting the first turn. Unfortunately, he misjudged a corner and went over the bars, handing the lead and the victory Walton. Hengeveld quickly got back into the race and finished second. “I got a decent jump at the start and at the end of the first corner I was first, but then I made a mistake and stuffed the front wheel into a corner and got passed,” said Hengeveld. “Walton was just on it today and I ended up with a second.” 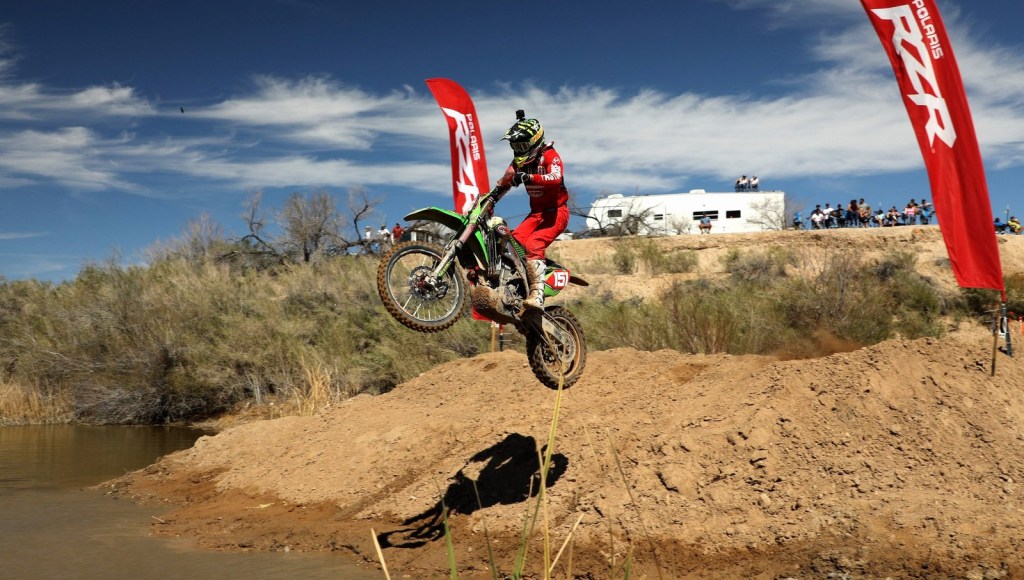 Austin Serpa finished third on his KTM and remains the points leader in the class. It marked Serpa’s third consecutive podium and he now leads the title chase by six points. “I’m glad I’m on the box,” said Serpa. “I got a little good luck and I salvaged a third, so if this is my bad race I’ll take it.”

In Pro 2 Lights, Nicholson netted his first class victory. Nicholson hung back during the first two thirds of the race before he took the lead for good. Thomas Jones was second, ahead of Brandy Richards. All three were riding KTMs. 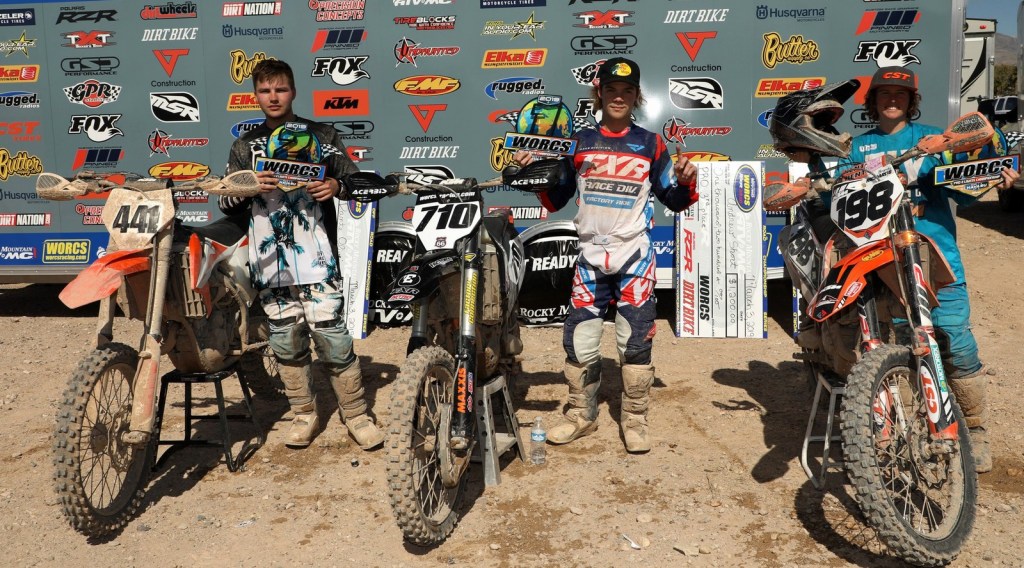 “I just tried to stay consistent and stayed behind Brandy waiting for her to make a mistake,” said Nicholson. “I learned a Primm that Brandy is really strong for the whole race so I waited for her to get a little bit tired and then I pulled ahead for the win. I had a DNF in the last race, so I really needed this to get back into the points.”

Jones was competing his first WORCS race of the season. He survived the rough and difficult track to finish second. “The track was brutal,” said Jones. “I’m so happy to finish on the podium.”

Richards continued her role as one of the fastest woman in off road racing. After taking the holeshot, she fell back to third at the finish. Her second podium of the season comes after becoming the first woman ever to get a WORCS Pro 2 Lights podium at the season opener. She now leads the championship by seven points.

“It’s great to battle with these guys,” said Richards. “It gets me faster and hopefully it gets them faster, as well. “We went back and forth for a while before I settled back into third. Toward the end I was just by myself running a good pace.”

The WORCS motorcycles will remain in the Grand Canyon State for the next round, being held at Canyon Motocross in Peoria, AZ. The race is scheduled for March 22-24.