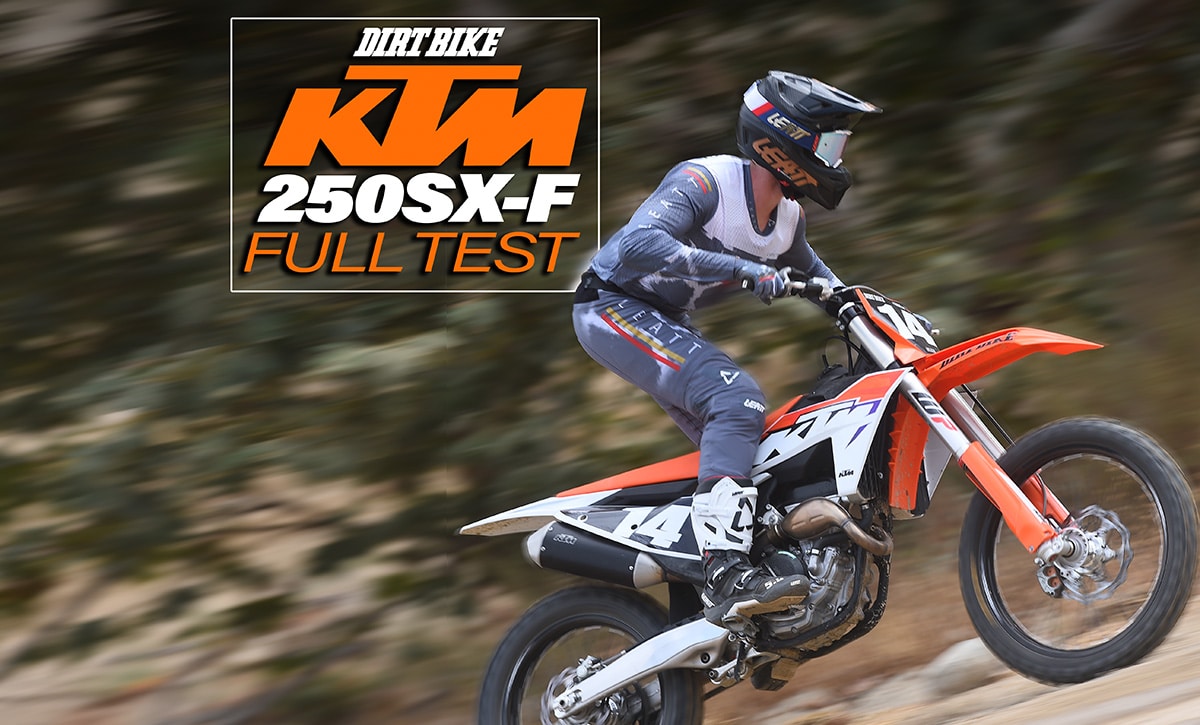 The great KTM tidal wave of 2023 has now washed ashore. Never before has a company released so many newly redesigned dirt bikes in one season. Of nearly 20 new bikes in the greater Pierer family, the 2023 KTM 250SX-F has one of the most extensive redesigns. You could argue that this is the one bike that didn’t need much. It already was the lightest bike in the class, and, according to the dyno, it had the best overall power spread. And yet the bike got a whole new motor in addition to the same new chassis that the 350 and 450 received. Why such a dramatic change? Despite having so much that’s so right, the KTM 250SX-F lacked a certain thrill factor. It reported for duty and did its job without inspiration or spark. The missing element is a hard ingredient to define and even harder to engineer into a new model.

The 2023 KTM 250SX-F has the same frame as the new 450SX-F. It’s not just similar, it’s exactly the same. It also has the same bodywork, brakes and suspension components. Only the suspension setup and tire sizes are different as far as the chassis goes. That chassis has been in the works for a very long time. Most of the visible parts are more massive, but the main goal was to isolate flex to certain planes of movement and specific areas. There’s a more direct connection between the swingarm pivot and the top shock mount, and engineers say that allows them to make rear suspension changes that have less effect on front suspension and vice versa. They also reoriented the motor within the frame so that the countershaft sprocket is 3mm lower in relation to the swingarm, which gives the bike less squat under acceleration.

The motor is about 8mm shorter from bottom to top. It still doesn’t deviate far from the design concepts of the original. It uses double overhead cams and a system of tiny finger-followers that allow more aggressive valve tuning. The valves are huge: 32.5mm intake and 27.5mm exhaust. The motor is capable of incredible revs; well over 13,000 rpm. That’s not especially new, but each year the mapping is a little more sophisticated, and the rev limiter is less abrupt on top. The KTM has two maps—launch assist and traction control—just like before. Now there’s a new feature called Quickshift on the same multi-switch. It allows you to make full-throttle upshifts more smoothly by momentarily interrupting the ignition when you shift. If that sounds scary to you, it’s easy to disable.

As we said, KTM already was the champion of the dyno room. The 2022 Kawasaki KX250F and the 2021 Honda CRF250R could give the 2022 250SX-F a battle on top, but nothing carried the peak as long or made as much torque. Now, KTM has gained a little more, all on top. The bike makes well over 40 horsepower at peak. That’s amazing considering that the first Yamaha YZ250F back in 2001 made about 31 horsepower and was so fast that the AMA considered banning it from pro competition. Times have changed.

Peak power was never an issue for the KTM, though. Most riders complained that it felt flat through the middle. In truth, it was flat simply because it started making power earlier and had less hit than most 250Fs. That’s still the case. The new 250 has a power delivery that’s about as linear as they come. It actually has an amazingly broad spread, allowing you to carry the same gear for a very long time. The trick is to rev it out, even when it sounds like it’s time to shift.

Another trick to riding the KTM is to write “OTTD” on your crossbar pad. That’s “Open the Throttle Dummy,” and it’s a philosophy to live by for KTM 250 riders. Some bikes make power from the first crack of the throttle. That’s what makes the Yamaha YZ250F seem like it has more low-rpm torque than it really does. Not the KTM. It likes a big handful of gas. In truth, it outperforms the 2022 YZ250F at all rpm levels when the throttle is wide open but not at half or quarter throttle. It’s surprising to us that virtually every part in the 2023 KTM 250 motor has changed, and yet it had the same basic character as the old one. It’s still very powerful if you know the tricks.

The KTM 250SX-F chassis has a very different feel for 2023. If you’re used to your older KTM, you’ll notice two defining characteristics in the new bike. First, it’s noticeably more rigid. The new frame is, in fact, stiffer in almost every way. KTM clearly has faster, pro-level riders in mind. The next thing you’ll notice is that the bike squats less under acceleration, just as advertised. For some riders, this is a big improvement. For others, dealing with more or less squat is simply a matter of adjusting your riding style. Most do it subconsciously.

Beyond that, the KTM has the same geometry as before and still handles like a KTM. It turns well and feels light. In truth, the bike is light but not as light as it used to be. The 2023 model weighs 226 pounds without fuel. It was 218 pounds in 2022. The 2023 GasGas MC250F is still built on the same platform as the 2022 KTM, so it now inherits the crown of the lightest in class, with the Honda close behind. Do you notice the KTM’s extra weight? Yes, if you’re sensitive to that sort of thing. We can’t say it slows the bike down in any way, though.

The only real complaint we have about the new 250SX-F revolves around the comfort level. The suspension feels less compliant at low speeds. It has the same fork as always: the WP Xact air fork. In the past, you could always get this fork to work well in a wide variety of conditions, but it’s a little harder with the new chassis. Be prepared to make small changes at the track to get the most of it. The stock settings are 152 psi, 12 compression and 17 rebound. That’s a good starting point. The compression is your most effective tool. If you go crazy with air pressure, you’re making your job harder in the long run. Make small changes—going softer for hard-pack, stiffer for sand. Same goes for the rear. The settings that you used in the past might not work for this chassis.

All the details we loved on the previous KTM 250SX-F are still there. The Brembo brakes are progressive and powerful. The hydraulic clutch is the best in the business. The rims, tires and even the ODI lock-on grips are all outstanding parts. Once you see past all the hype about the new chassis and redesigned motor, it seems that the 2023 KTM is an incremental step forward and will probably occupy the same place in the market. For some riders, it might still be missing that intangible thrill factor. For others, it still has the fastest motor in the 250 class, and that’s all it takes to keep it in front of the class.