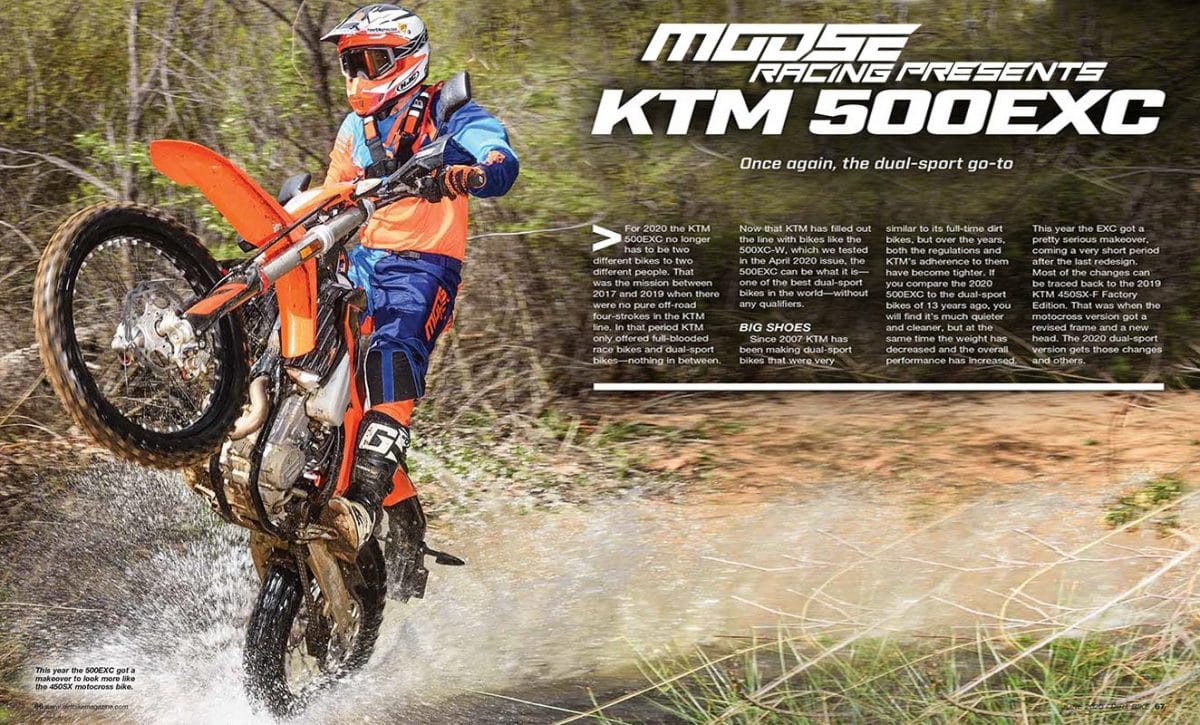 For 2020 the KTM 500EXC no longer has to be two different bikes to two different people. That was the mission between 2017 and 2019 when there were no pure off-road four-strokes in the KTM line. In that period KTM only offered full-blooded race bikes and dual-sport bikes—nothing in between. Now that KTM has filled out the line with bikes like the 500XC-W, which we tested in the April 2020 issue, the 500EXC can be what it is—one of the best dual-sport bikes in the world—without any qualifiers. 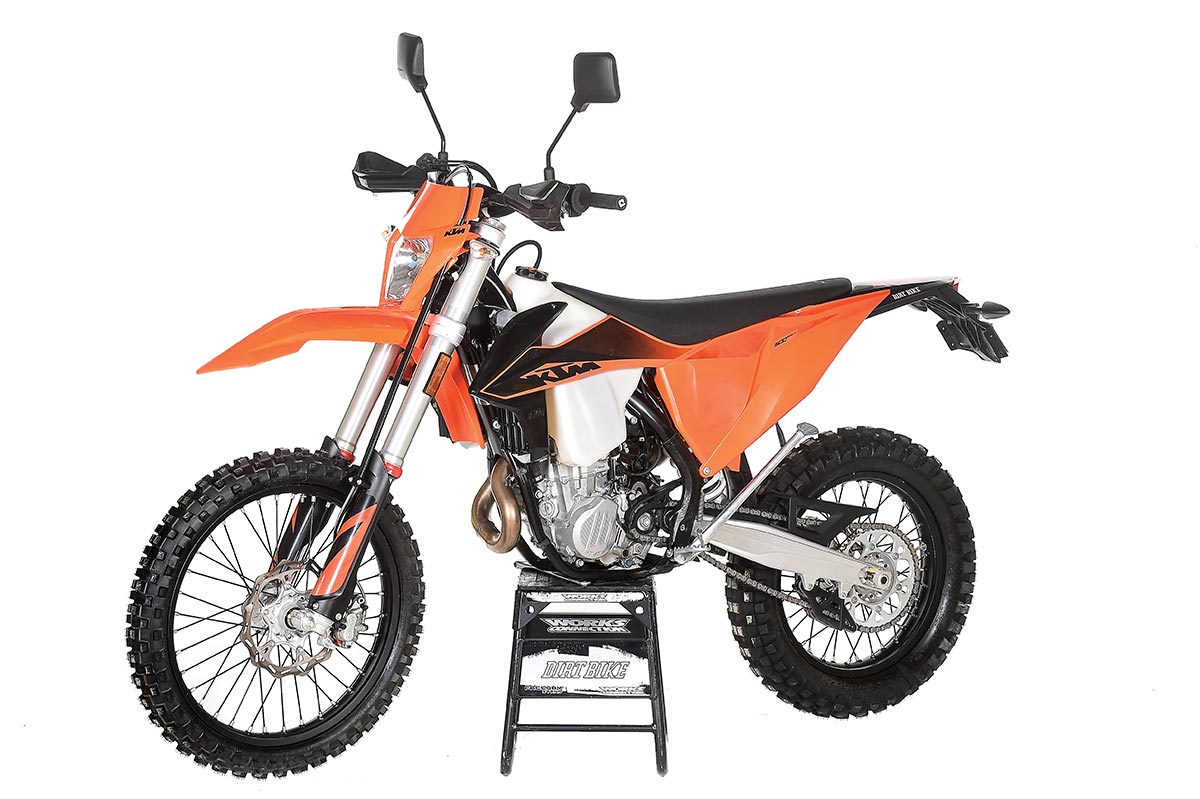 BIG SHOES
Since 2007 KTM has been making dual-sport bikes that were very similar to its full-time dirt bikes, but over the years, both the regulations and KTM’s adherence to them have become tighter. If you compare the 2020 500EXC to the dual-sport bikes of 13 years ago, you will find it’s much quieter and cleaner, but at the same time the weight has decreased and the overall performance has increased. This year the EXC got a pretty serious makeover, coming a very short period after the last redesign. Most of the changes can be traced back to the 2019 KTM 450SX-F Factory Edition. That was when the motocross version got a revised frame and a new head. The 2020 dual-sport version gets those changes and others. 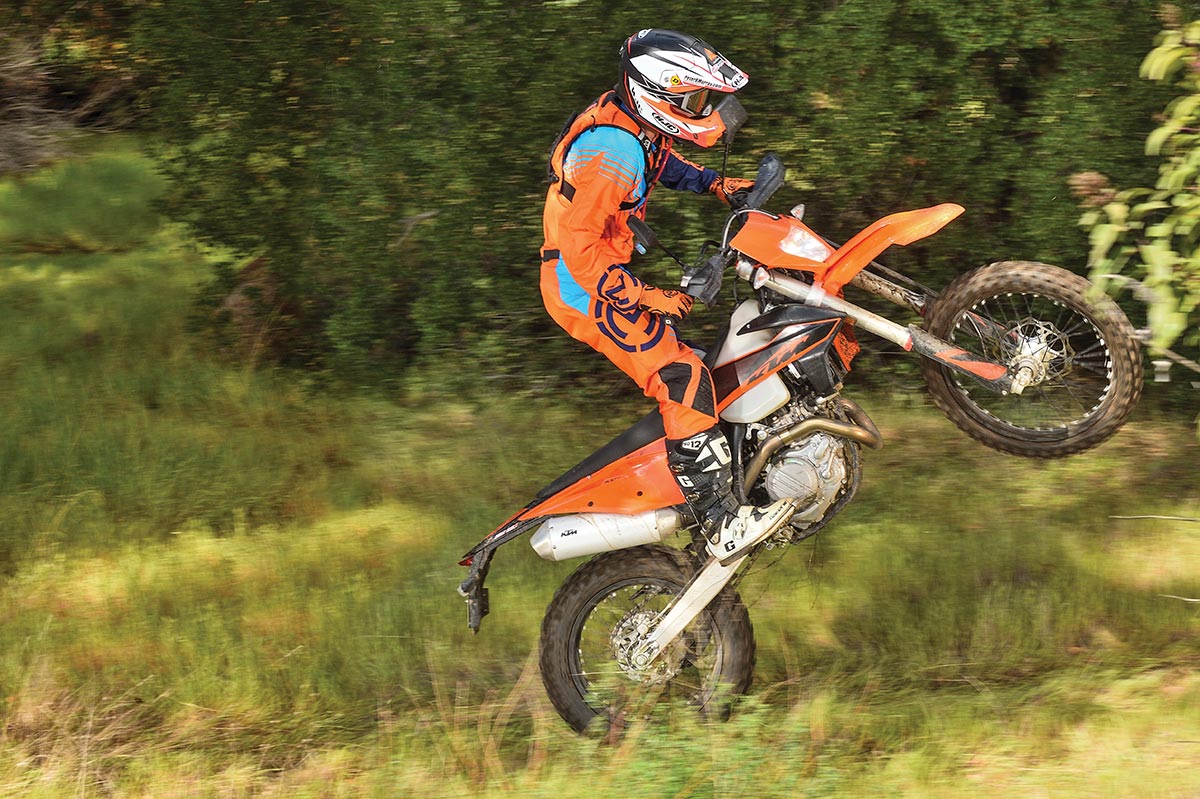 As a trail bike, the EXC is far friendlier than any 450cc closed-course competition off-road bike.

The core of the bike isn’t that different, though. The motor is still a single-overhead-cam four-valver with a six-speed gearbox and Keihin fuel injection. One obvious change is the fact that the case on the left side of the motor no longer has a plugged-up hole where the kickstarter used to be. The kickstarter itself has been gone for a number of years, but KTM did offer a kit to retrofit one if you really didn’t trust the electric starter. Now, that’s gone. The other clear change is the head, which is much more compact than the one it replaces. That’s an advancement that comes straight off the 450SX that Cooper Webb races. The dual-sport version is, of course, super quiet and complies with emissions regulations in all 50 states. The EFI system is supposed to be tamper-proof, but it seems that garage tuners have taken that challenge seriously, and we have heard of a variety of ways they deal with that. One of the most interesting of the restrictions is the reed valve in the air boot. This is mainly a measure to reduce intake noise. Riders often remove them with somewhat dubious results. 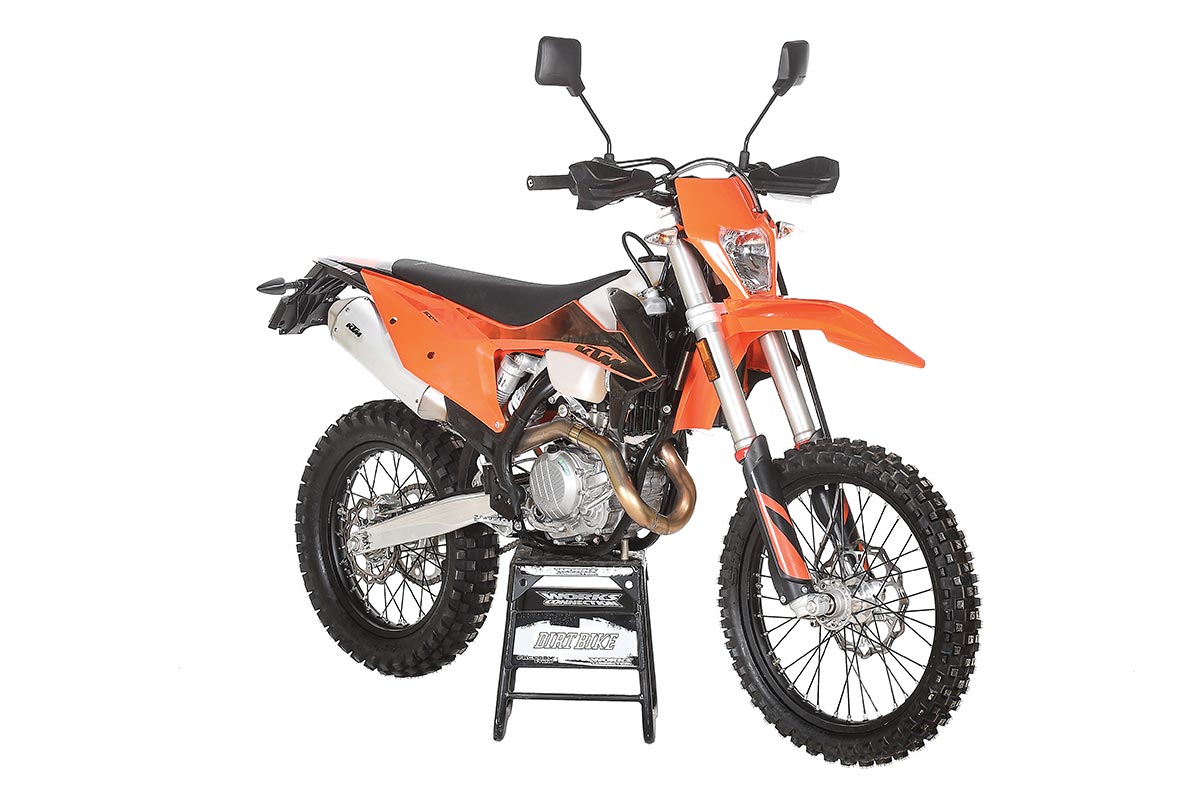 As far as the chassis goes, there are several key differences between the motocross version and the dual-sport. The biggest is suspension. In front, the EXC uses the WP Xplor fork with coil springs, not the Xact air fork found on the race bikes. In the rear, the EXC uses no-linkage PDS rear suspension. If you know your KTMs, you know this has been a mainstay of the company’s off-road bikes since 1997. When the motocross bikes got linkage back in 2013, the off-road guys within the company wouldn’t let go of PDS. Extreme riders like Jonny Walker still love it. This is a key difference between the KTM 500EXC and its sister product, the Husqvarna FE501. Both have the same motor and the same fork, but the Husky uses more conventional linkage suspension. As far as the bodywork, the EXC looks just like the latest motocross bike but with lights and DOT equipment. The fuel tank is larger (2.2 gallons vs. 1.6), and handguards are standard equipment. Unlike on the motocross bike, there’s no map switch on the handlebar, no traction control and no launch mode.

In the past, there have been big issues with EPA-legal dual-sport bikes, especially ones that were designed to follow the letter of the law. They were quiet, but that made them run hot, pop, backfire and stall. The decrease in power was the least of the issues. That’s not the case here. The 2020 KTM 500EXC runs amazingly well in stock form. It’s super clean without any of the nonsense. It almost never coughs and dies. It isn’t especially powerful, though. The newly offered dirt version of the bike is more powerful in the middle and down low. And the 450XC-F closed-course race bike is far, far more powerful. If you’re a big hill-climber, the dual-sport bike might not be enough. But, anyone who goes trail riding will love it. If your riding partner is on a 450 race bike like the XC-W or a Honda RX, take him straight to your tightest trail. He’s going to stall it, boil over and invent creative expletives. You, on the other hand, will enjoy his suffering; it’s only payback. The 500EXC is excellent on tight trails and extreme obstacles. It never boils, because it has a radiator fan that runs most of the time. Thankfully, it turns itself off shortly after you stop, so you can tell your buddy how long you had to wait for him. There is one caveat here. The stock tires are not suitable for any real dirt rides. The Conti TKC80s were chosen because they are quiet for the ride-by noise test; no other reason. We replaced them with STI Tech 2 DOT knobbies almost immediately. 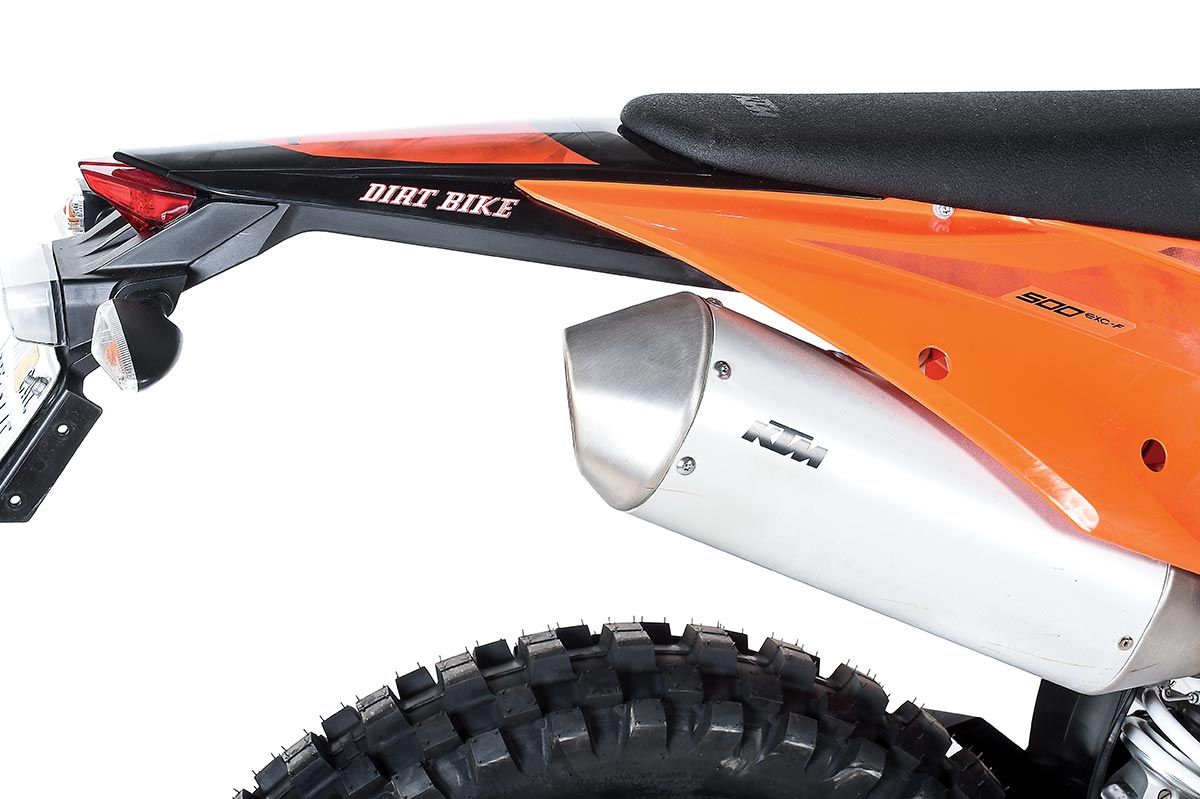 The EXC is super quiet, not only because of the muffler, but because of intake measures.

Another big reason the EXC is so good in the tight stuff is because it’s so stinkin’ light. On our scale, the bike is 244 pounds without fuel. If that sounds too good to be true, it is, at least to some extent. That’s with the stock tires. With the Tech 2s (or pretty much any knobbies) and rim locks, the bike is 5 pounds heavier. Maybe that’s another reason KTM chose those tires. As a side note here, we also have to offer an apology to our most faithful readers. In the Husqvarna FE501S story in our March, 2020 issue, we reported that the bike weighed 240 pounds without fuel. That was a mistake; it couldn’t be lighter than the KTM because of the linkage rear suspension. We have since reweighed the Husky and come up with 248 pounds. Put that in the category of operator error. The bottom line is that both bikes are super light.

WHO NEEDS LINKAGE?
In the ongoing debate of linkage-versus-PDS suspension, we can only offer the usual response: it’s a matter of personal preference. Linkage allows the bike to ride more level, and PDS offers more ground clearance. In this case, the usual “stink bug” complaint that we often hear about PDS suspension wasn’t an issue simply because the bike is so soft. KTM clearly positioned this bike more towards the comfort end of the spectrum. Both ends settle evenly, although you will notice a lot of fork dive under hard braking. The soft setup is great for those tight trails we mentioned, but as soon as the bike gets in third or fourth gear, avoid really big whoops. The EXC is a cushy sweetheart, not a hard-edged racer.

Likewise, when you get into deep whoops, you’ll have to keep a close eye on your license plate. The rear fender, with all its blinkers and lights, isn’t very stable and can get sucked into the rear wheel. Most of the other DOT equipment is excellent. The blinkers can withstand a lot of abuse. The mirrors are durable (just large), and the headlight is decent. As far as the hydraulic clutch and Brembo brakes are concerned, all that stuff is straight off the race bike and outstanding. Our only complaint in that area is that the levers are a little too short for a dual-sport bike. They have to be mounted further inboard because of the switches on the bars, and that makes them hard to reach.

You have to keep in mind that this is a dirt bike adapted for dual-sport use. That’s what makes it so good off-road. Yes, now KTM has a full-time 500cc off-road bike; but as it turns out, its dirt capabilities are virtually identical to those of the 500EXC. At $11,399, the dual-sport version is more expensive. But, the advantage is that you don’t need a pickup truck to haul it around.