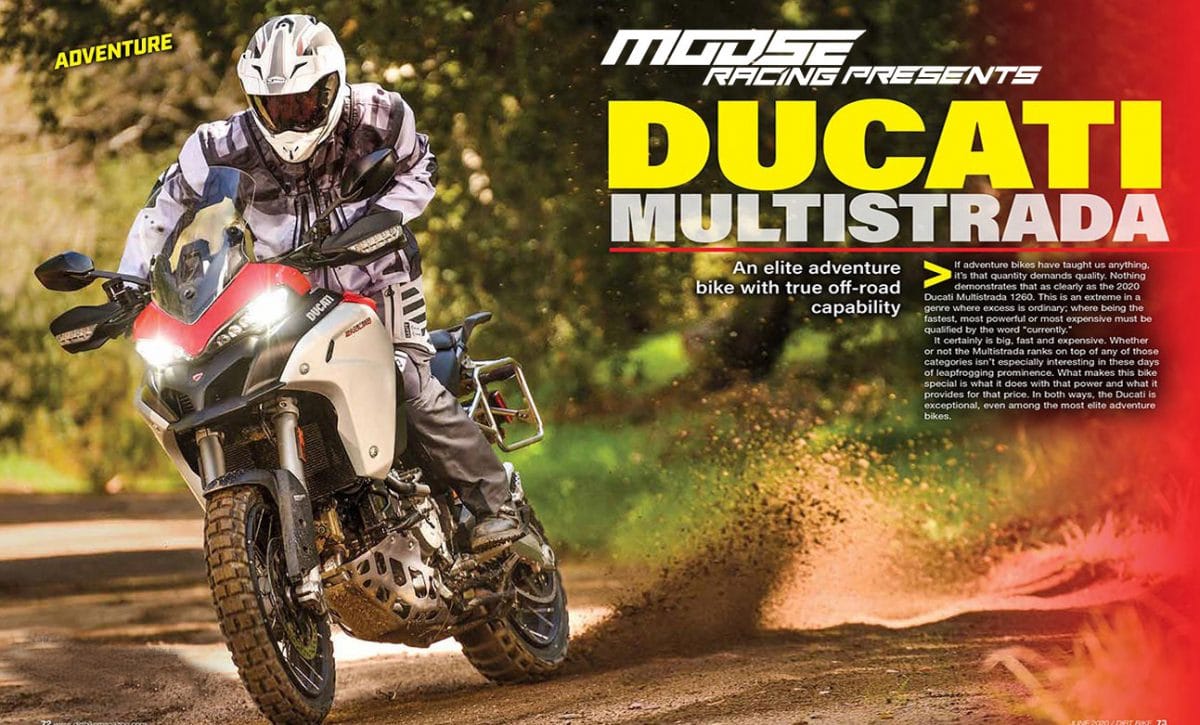 If adventure bikes have taught us anything, it’s that quantity demands quality. Nothing demonstrates that as clearly as the 2020 Ducati Multistrada 1260. This is an extreme in a genre where excess is ordinary; where being the fastest, most powerful or most expensive must be qualified by the word “currently.”

It certainly is big, fast and expensive. Whether or not the Multistrada ranks on top of any of those categories isn’t especially interesting in these days of leapfrogging prominence. What makes this bike special is what it does with that power and what it provides for that price. In both ways, the Ducati is exceptional, even among the most elite adventure bikes. 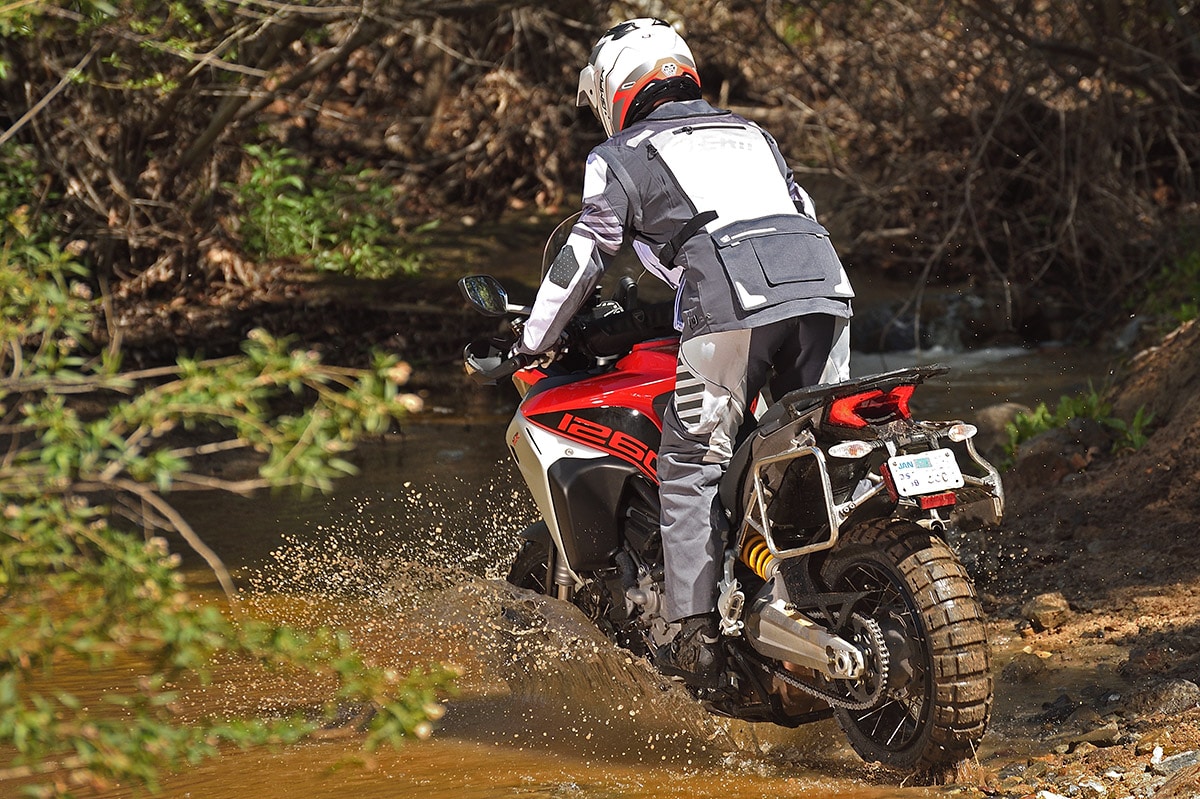 TRACKING THE ’STRADA
The Ducati Multistrada has been around in one form or another for about 18 years. Even before that, the bike’s bloodline can be traced to the Cagiva Elefant of the late ’80s. The factory version of that bike won the Dakar Rally in 1990 and 1994 in the hands of Edi Orioli. After Ducati separated from Cagiva, however, the firm’s off-road identity was lost as Ducati focused on sport bikes and road racers. It was years before the company tried to reconnect with that heritage by releasing the Multistrada in 2002. Multistrada literally translates to “many surfaces,” but the earlier versions were only truly comfortable on one—pavement.

Last year the 1260 Enduro came out, and it had the most dirt technology of anything Ducati had ever produced. It also had far more power than anything Ducati had ever built with off-road riding in mind, and making those two seemingly divergent themes compatible was tricky. The heart of the bike is still the L-twin motor, just like it was in Edi Orioli’s day. The 2020 version is equipped with the 1262cc Testastretta motor, which is rated at 158 horsepower. It’s a high-tech sport bike powerplant with Desmodromic Variable Timing. This is a system that combines variable timing with Ducati’s Desmo valve actuation, which closes the valves mechanically rather than with springs. To vary the timing, the bike’s ECU alters the oil pressure to valve adjusters according to rpm and engine load. At high rpm, there’s more valve overlap than at low rpm; it’s sort of a power valve for four-strokes.

Peak power isn’t the main thrust here. Ducati says that 85 percent of maximum torque is available below 3500 rpm. What really makes this Multistrada more off-road-worthy is its selection of ride modes. Virtually all the manufacturers in this segment are dabbling with menu-driven electronic adjustments—some for power output, some for suspension and so on. Ducati has addressed just about everything you can think of in its menus. You choose between Sport, Urban, Touring or Enduro. Each mode has its own default settings for traction control, engine output, ABS, suspension (both damping and preload), wheelie control and a few other things we haven’t quite figured out. You can go deeper into the settings to customize any of these functions individually.

For the Enduro model, the cast wheels of the more street-oriented Ducati models are replaced with spoked 19-inch front and 17-inch rear wheels. The tank is much larger, holding almost 8 gallons. The suspension is beefier as well. The Sachs fork and shock produce 7.3 inches of travel. This is actually reduced compared to the Multistrada 1200 we tested three years ago, bringing the seat height down slightly. The bike still has an adjustable rear brake lever. When you flip over the tip, the pedal is higher so that it’s more accessible from the standing position. The shifter can likewise be adjusted (with a couple of wrenches), and you can remove the footpeg rubbers to reveal full-sized dirt bike pegs with teeth and everything. It’s this kind of detailing that lets us know that Ducati really has tested and developed the bike off-road.

LEARNING THE CODE
No matter how many features and how much technology a bike like this has, it’s hard not to focus on the fact that it says 158 horsepower on the spec chart. We never put it on a dyno, but we didn’t have to. It’s true. This is a nutty powerful motorcycle. The 2020 model actually is down a couple of horsepower on top with increased torque, and it’s that torque you feel most when you crack the throttle. It moves out hard and fast, probably pulling a few Gs along the way. In Sport mode, the real problem is finding any place where you can open the throttle all the way. On the street, the longest you can usually get away with is less than a full second before you’re doing something seriously illegal. In the dirt, traction control keeps you from doing anything stupid. Sport mode defaults to level 4 (of 8), and in the dirt, no matter how gently you open the throttle, the bike’s brain intervenes and more or less jabs at the kill button. When you put it in Enduro mode, it turns off traction control, turns off wheelie control, lowers the power output to medium and reduces ABS. Then you have something like a 30-percent decrease in horsepower, which is still plenty. In this configuration, the bike is completely manageable—at least by someone who is comfortable on a 500-pound motorcycle with lots of power. This isn’t an entry-level adventure bike. If you feel comfortable riding a KLR650 around a motocross course, that’s when you’re ready to take the ’Strada on a real off-road trek.

Our test bike came with Pirelli Scorpion Rally tires, which are pretty much mandatory for off-road riding on a bike this big. The overall riding position on the Enduro model is far more dirt-oriented than any big Ducati in the past, but still not as committed as a KTM Adventure or even an Africa Twin. The rider sits in a deep pocket that makes it difficult to stand up, but when he does stand, the bars, pegs and controls are all perfect. Like all adventure bikes, that’s the way to ride the Ducati—standing up and leaning over the front. When you sit, it takes too much weight off the front wheel and makes it hard to turn. When you do it all right, the bike’s cornering capability is right in line with a BMW R1250GSA or KTM 1290. The Ducati has a lower seat height than either of those machines, so if you get into intimidating terrain like rocks or ruts, you can get away with paddling with both feet out (as long as your friends aren’t watching).

Where the bike really shines, though, is on high-speed dirt roads. It’s super stable and the suspension is firm. Front and rear damping levels are among the automated adjustments that are tweaked when you switch modes. We could generally tell the bike that we were riding two-up in order to increase rear preload as well as damping. The suspension is surprisingly good in the dirt. You still need to treat whoops and G-outs with respect, but once again, the Ducati reflects a certain amount of real off-road development.

ROAD TIME
We only logged a few hundred miles on the highway. That’s just getting warmed up to a bike like this, but we still developed an appreciation for its creature comforts. Our test bike had handguards and cruise control (standard), plus heated grips and aluminum panniers (options). We were lucky enough to ride the bike in a driving rainstorm and found that you can hide more or less inside the bike and stay reasonably comfortable. The windscreen is just tall enough. As usual, our favorite option is heated grips. And in case you think you’re tough enough to ride in Sport mode when the roads are slick, get over it. Urban mode kicks up the traction control and the anti-lock braking while reducing the power to manageable levels. We were a little surprised that our fuel mileage didn’t skyrocket when we droned along at highway speed. The Ducati didn’t log over 40 mpg no matter what we did.

As you might guess, we didn’t want to give the bike back. Ducati only let it go for a couple of weeks. They’re smart. They probably knew the Virginia City GP was approaching, and they have a class for adventure bikes. The truth is that we wouldn’t have hesitated to take the 2020 Multistrada there, or on any other demanding off-road adventure. That would have been unthinkable on earlier Ducatis. There’s still some room for improvement, though. The traction control isn’t as seamless as KTM’s or Honda’s, and the rider positioning is still more street than we would like, but then we are admittedly biased dirt guys. If we’re happy, it probably means Ducati has gone too far. As is, the Multistrada is an excellent balance and a great contender for king of the elite adventure bikes.