In 1996, the two-stroke vs. four-stroke debate had a very different tone. Doug Henry’s YZF400 was still on the drawing board and two-strokes were unchallenged at the  elite levels of motocross. In the July, 1996 issue of Dirt Bike, Roger DeCoster offered his view on the future of four-strokes in racing. At the time, even he couldn’t foresee the changes that were to come and how quickly they would happen. Still, his comments reflect keen insight. 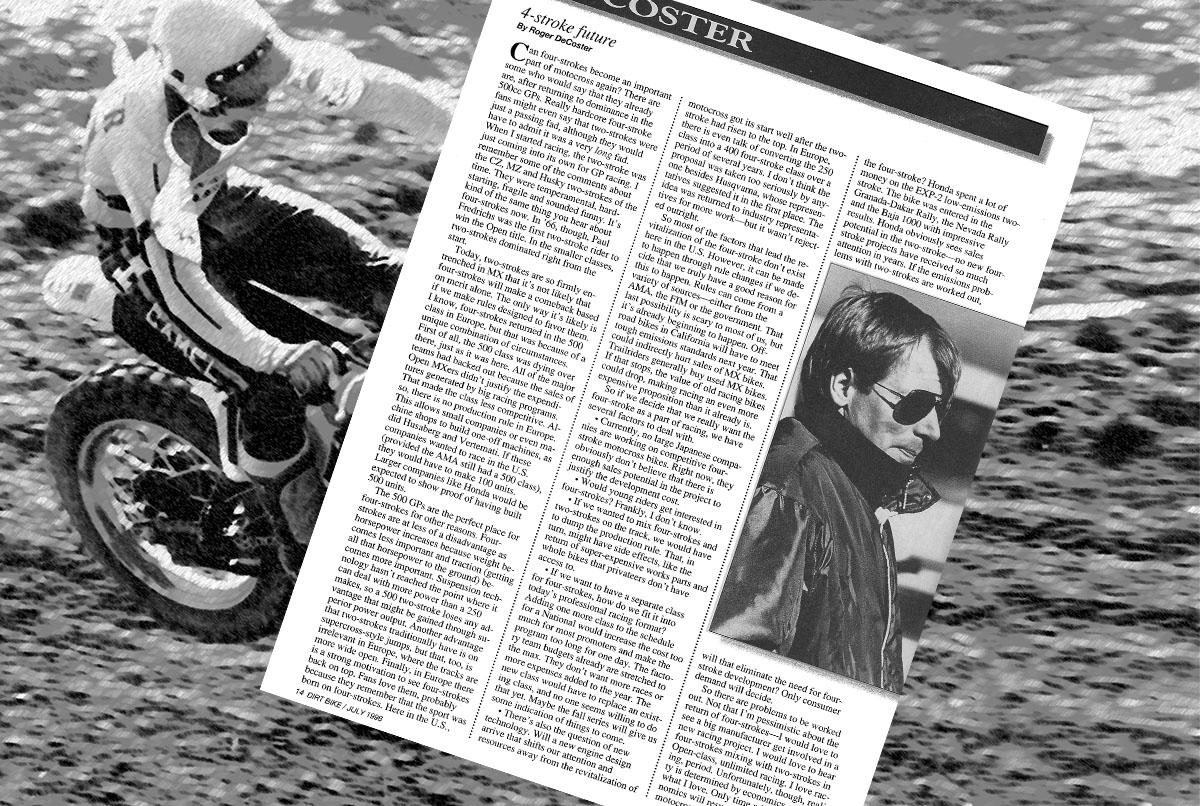 Can four-strokes become an important part of motocross again? There are some who would say that they already are, after returning to dominance in the 500cc GPs. Really hardcore four-stroke fans might even say that two-strokes were just a passing fad, although they would have to admit it was a very long fad.

When I started racing, the two-stroke was just coming into its own for GP racing. I remember some of the comments about the CZ, MZ and Husky two-strokes of the time. They were temperamental, hard-starting, fragile and sounded funny. It’s kind of the same thing you hear about four-strokes now. In ’66, though, Paul Fredrichs was the first two-stroke rider to win the Open title. In the smaller classes, two-strokes dominated right from the start. Today, two-strokes are so firmly entrenched in MX that it’s not likely that four-strokes will make a comeback based on merit alone. The only way it’s likely is if we make rules designed to favor them.

I know, four-strokes returned in the 500 class in Europe, but that was because of a unique combination of circumstances. First of all, the 500 class was dying over there, just as it was here. All of the major teams had backed out because the sales of Open MXers didn’t justify the expenditures generated by big racing programs. That made the class less competitive. Also, there is no production rule in Europe. This allows small companies or even machine shops to build one-off machines, as did Husaberg and Vertemati. If these companies wanted to race in the U.S. (provided the AMA still had a 500 class), they would have to make 100 units. Larger companies like Honda would be expected to show proof of having built 500 units.

The 500 GPs are the perfect place for four-strokes for other reasons. Four-strokes are at less of a disadvantage as horsepower increases because weight becomes less important and traction (getting all that horsepower to the ground) becomes more important. Suspension technology hasn’t reached the point where it can deal with more power than a 250 makes, so a 500 two-stroke loses any advantage that might be gained through superior power output. Another advantage that two-strokes traditionally have is on supercross-style jumps, but that, too, is irrelevant in Europe, where the tracks are more wide open. Finally, in Europe there is a strong motivation to see four-strokes back on top. Fans love them, probably because they remember that the sport was born on four-strokes. Here in the U.S., motocross got its start well after the two-stroke had risen to the top. In Europe, there is even talk of converting the 250 class into a 400 four-stroke class over a period of several years. I don’t think the proposal was taken too seriously by anyone besides Husqvarna, whose representatives suggested it in the first place. The idea was returned to industry representatives for more work–but it wasn’t rejected outright.

So most of the factors that lead the revitalization of the four-stroke don’t exist here in the U.S. However, it can be made to happen through rille changes if we decide that we truly have a good reason for this to happen. Rules can come from a variety of sources–either from the AMA, the FIM or the government. That last possibility is scary to most of us, but it’s already beginning to happen. Off-road bikes in California will have to meet tough emissions standards next year. That could indirectly hurt sales of MX bikes. Trailriders generally buy used MX bikes. If that stops, the value of old racing bikes could drop, making racing an even more expensive proposition than it already is. So if we decide that we really want the four-stroke as a part of racing, we have several factors to deal with.

So there are problems to be worked out. Not that I’m pessimistic about the return of four-strokes–I would love to see a big manufacturer get involved in a new racing project. I would love to hear four-strokes mixing with two-strokes in Open-class, unlimited.racing. I love racing, period. Unfortunately, though, reality is determined by economics, not by what I love. Only time will tell if economics will resurrect the four-stroke motocrosser.

WHEN HONDA TRIED TO SAVE THE 2-STROKE