WHEN HONDA TRIED TO SAVE THE 2-STROKE 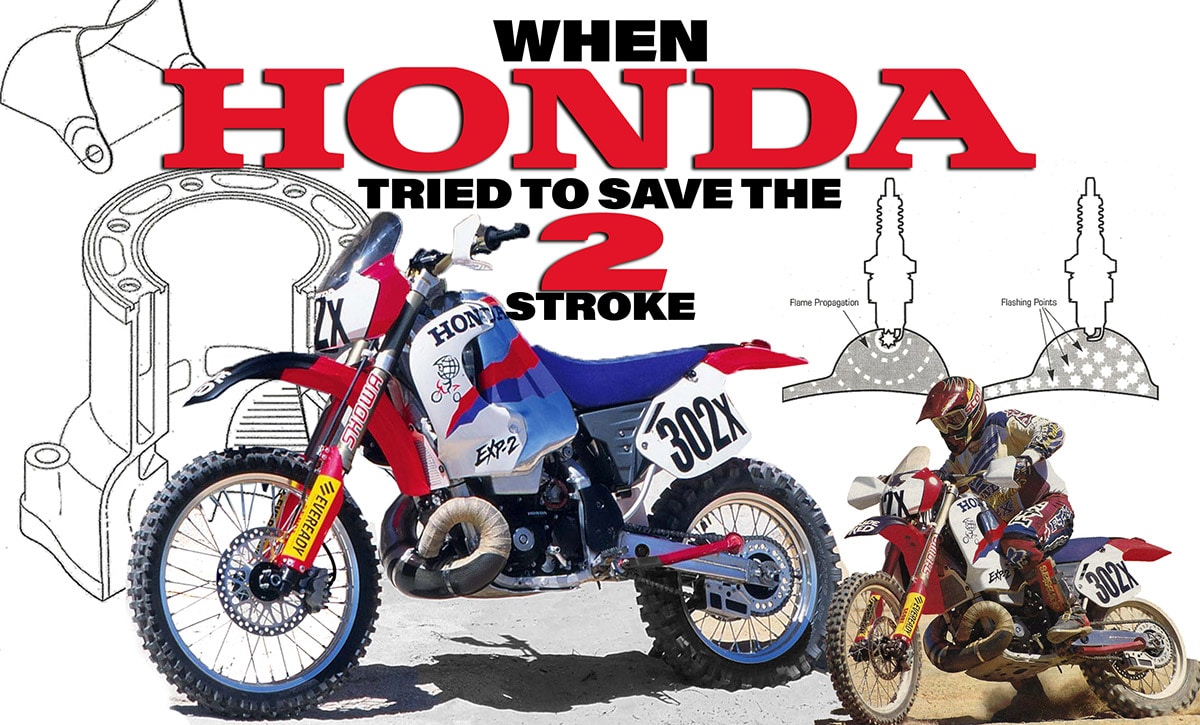 In 1996, Honda was devoted to the two-stroke motor. With tightening emission regulations on the horizon, the company invested millions in the first fuel-injected two-stroke motorcycle. The EXP-2 project used technology that hadn’t been seen before and hasn’t been used since. The prototype was proven in the Nevada Rally and the Baja 1000. The project was later abandoned as four-strokes provided a less costly solution. Here is what we wrote about our test ride on the EXP-2 in the July 1995 issue of Dirt Bike.

Honda is trying to save the two-stroke. The company has built a new low-emissions two-stroke that does not use lean carburetion or systems to treat the dirty exhaust. It produces less pollution because it uses Activated Radical Combustion, an entirely different combustion process that generates less pollutants. Best of all, the new engine outperforms current two-strokes in some respects!

Let’s back up a bit. The California Air Resources Board may impose strict new emissions regulations as early as 1997 that will apply to bikes sold for off-road use. At the moment. closed-course machines (motocross models) are not affected by the regulations. The problem is. current two-stroke engines cannot meet the new standards. Emissions police won’t hunt you down and take away any two-strokes you have, but manufacturers would be prohibited from selling machines that do not comply. This isn’t  just  a problem  for Californians. The rest of the U.S.. and to some extent the world has plans to follow California’s lead with regard to emissions regulations. 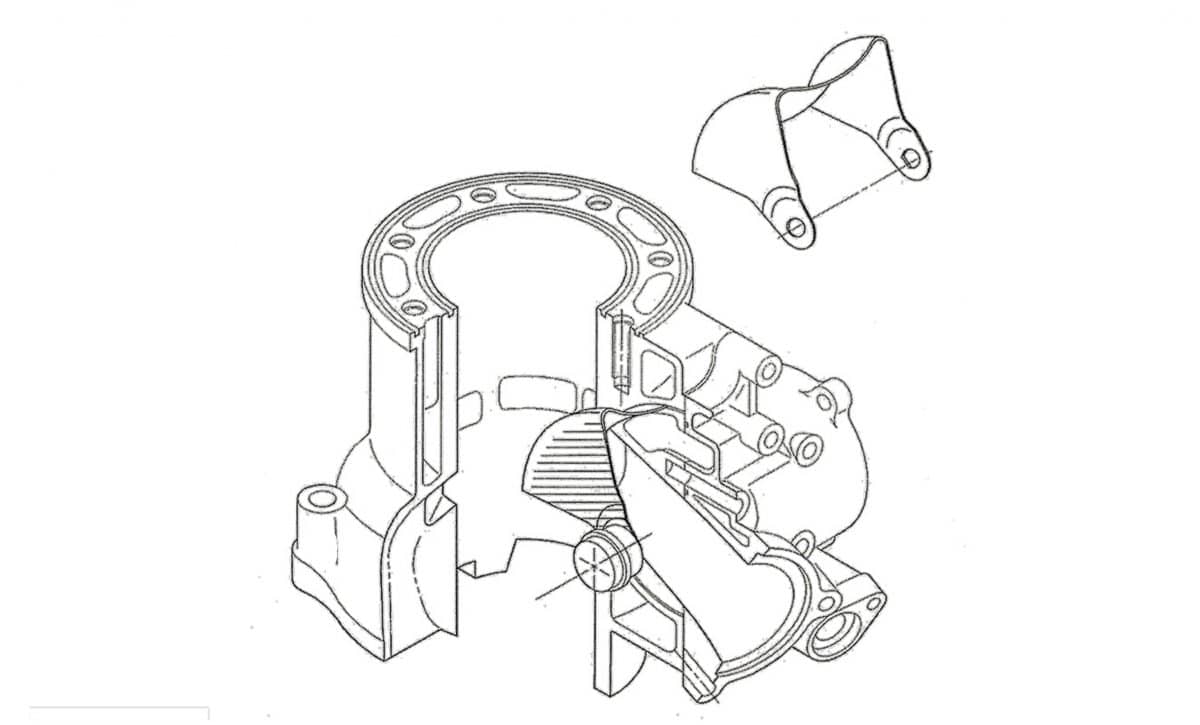 Conventional two-strokes are an emissions nightmare because they don’t burn all of the fuel they draw in. They send it out the exhaust. Part of the reason two-strokes are so sloppy with fuel is the odd but necessary situation of the exhaust port being open while the cylinder is being filled with a fresh charge. Misfiring is the other problem, especially under light loads. It happens because two-strokes use the incoming fresh charge to push out the burned charge. Light loads and moderate engine speeds don’t get things moving well enough to prevent the fresh charge from being mixed with unburnable exhaust. That’s why conventional two-strokes run and respond erratically unless they are working against a significant load. The two-stroke’s wasteful ways with fuel don’t just create emission problems, they make for poor fuel mileage as well. Despite Honda’s strong attachment to the four-stroke engine, the two-stroke’s benefits are so great that the company decided it was well worth it to make it work. Honda found that existing low-emissions two-stroke technology was pretty lame. Conventional two-strokes don’t like super-lean mixtures. Catalytic converters are generally bulky, heavy and expensive and don’t truly solve the emissions problems. They don’t do a thing about the poor response or poor fuel economy, either. Other experimental low-emissions two-stroke engine designs employ unrealistically costly, complex gasoline injection and (brace yourself, two-stroke fans) even valves!

Activated Radical Combustion sounds like something an advertising agency would dream up, but the name describes the Honda combustion process in accurate, scientific terms. The process itself is really not new. Managing it and making it truly work in a high-performance dirt bike engine is.

Activated radical combustion takes place in a two-stroke whenever a partially burned charge comes in contact with a fresh charge at certain throttle openings and engine speeds. Many dirt bikers have seen examples of Activated Radical Combustion. It’s what takes place in most engines that mysteriously run on, even when their ignitions are killed. What is happening is not “dieseling.” It’s a complex reaction caused by the highly reactive intermediate molecules (active radicals) left over by a previous ignition, not the direct result of heat or pressure.

Because combustion initiated by active radicals starts at the molecular level, it “lights” the charge from trillions of points, rather than at a spark plug way over on one end of the combustion chamber. Because the charge literally lights from within itself, it is burned extremely quickly and uniformly. Power is generated efficiently and far less combustion heat is transferred to engine parts.

Using little more than an exhaust valve (to limit the escape of radical-rich exhaust) coordinated with the throttle, Honda has devised a system that initiates, times and sustains this bizarre combustion process in the light-load range where it is most needed. Full-time conventional spark ignition takes care of starting and any speed range where Activated Radical Combustion isn’t practical or desirable. For strong full-throttle performance, for example, the exhaust-restricting valve must be fully open, so spark ignition does the job.

Honda’s roost-throwing, knobby-tired, rolling laboratory for the concept is the EXP-2 (“experimental two-stroke”) dirt bike. It is frighteningly complex with its computer-controlled electronic fuel injection and the electrically operated exhaust valve, but Honda assured us that the electronics are only there to simplify testing, adjustment and data recording. Once the “answer book” of throttle position-to-exhaust valve ranges and other parameters for controlling the Activated Radical Combustion process is complete, simple, affordable versions using carburetors and mechanical exhaust valves will be practical.

RIDING INTO THE FUTURE

So, what is it like to ride? It’s weird, but even the most normal rally bikes are weird. Huge tanks, 115-mph gearing and road race-top-end engine tuning isn’t the county-fair-winning recipe for a fun, responsive dirt bike. As a result, the 402cc EXP-2 doesn’t feel as crisp or strong as a CR250 in the midrange. The bottom-end power is like a two-stroke twin: lazy, smooth and with almost no engine vibration. A half-million-dollar bike with a counterbalancer-equipped engine should be smooth. It did have an eerily clean, even pull from idle to well past 100 mph, with real muscle way on top and no end in sight to the revs. It also makes sounds like a miniature Cummins Turbo Diesel at certain midrange throttle positions. No amount of low-speed riding could make the exhaust outlet wet or even dark black. After riding it for a while in varying conditions, you start to realize that a normal 400 two-stroke ported and geared like the EXP-2 would be a disaster. If this is what two-strokes will become, there is something to look forward to.