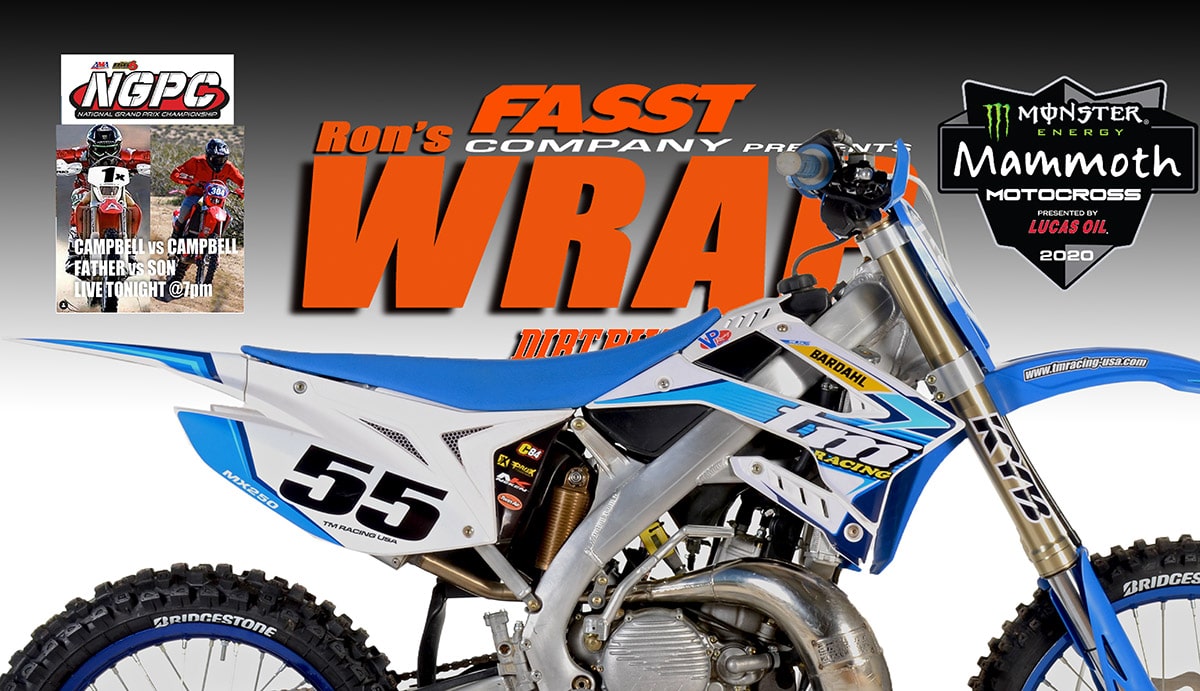 TM is selling more bikes in the U.S. than it ever has. Admittedly, it’s still not a very big number, but that’s part of the appeal of the small Italian company.  It’s exotic and exclusive. And two-strokes are still a very big part of the company’s battleplan. We have a new 250 motocross two-stroke right now and it’s an interesting mix of new technology and old-school fundamentals.

The TM motor was redesigned from scratch last year. It now has a counterbalance shaft and electric start. It already was the only two-stroke with a perimeter aluminum frame. It doesn’t have transfer port fuel injection, however. TM is the only company outside of the KTM/Husqvarna group with that technology, but this particular model has a Keihin carburetor. The electric start is integrated in the cases. Even with the starter and battery, the bike is reasonably light. On our scale, it weighs 225 pounds without fuel. For a comparison, the Husqvarna TC250 two-stroke motocrosser is 215 pounds. It has no e-start, no battery and no TPI fuel injection. The TM gets to keep its kickstart lever. 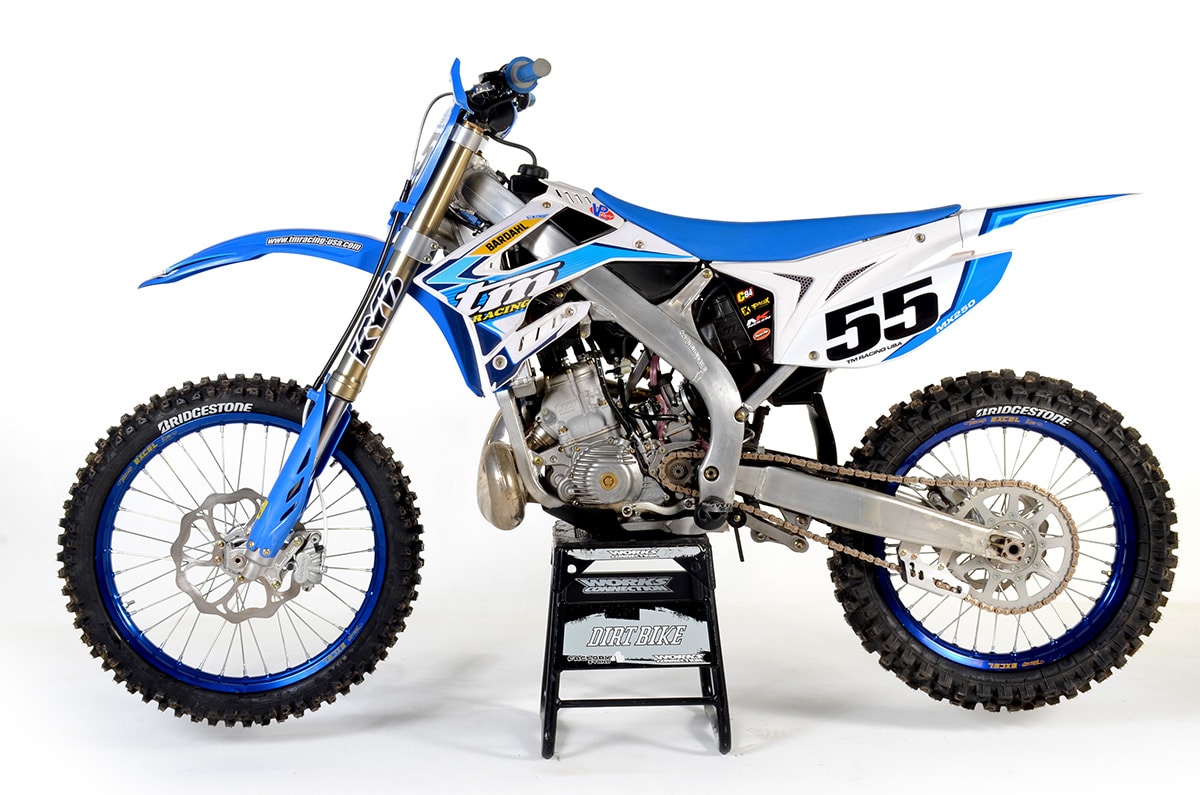 The TM uses mainstream components, for the most part. It has a KYB fork, Nissin brakes and Bridgestone tires. Our test bike came with a Pro Circuit pipe, which is an option from TM’s U.S. distributor. Standard stuff includes a hydraulic clutch, an A/B map switch and Excel  rims. The hubs and even the rear shock are beautifully made in house by TM. 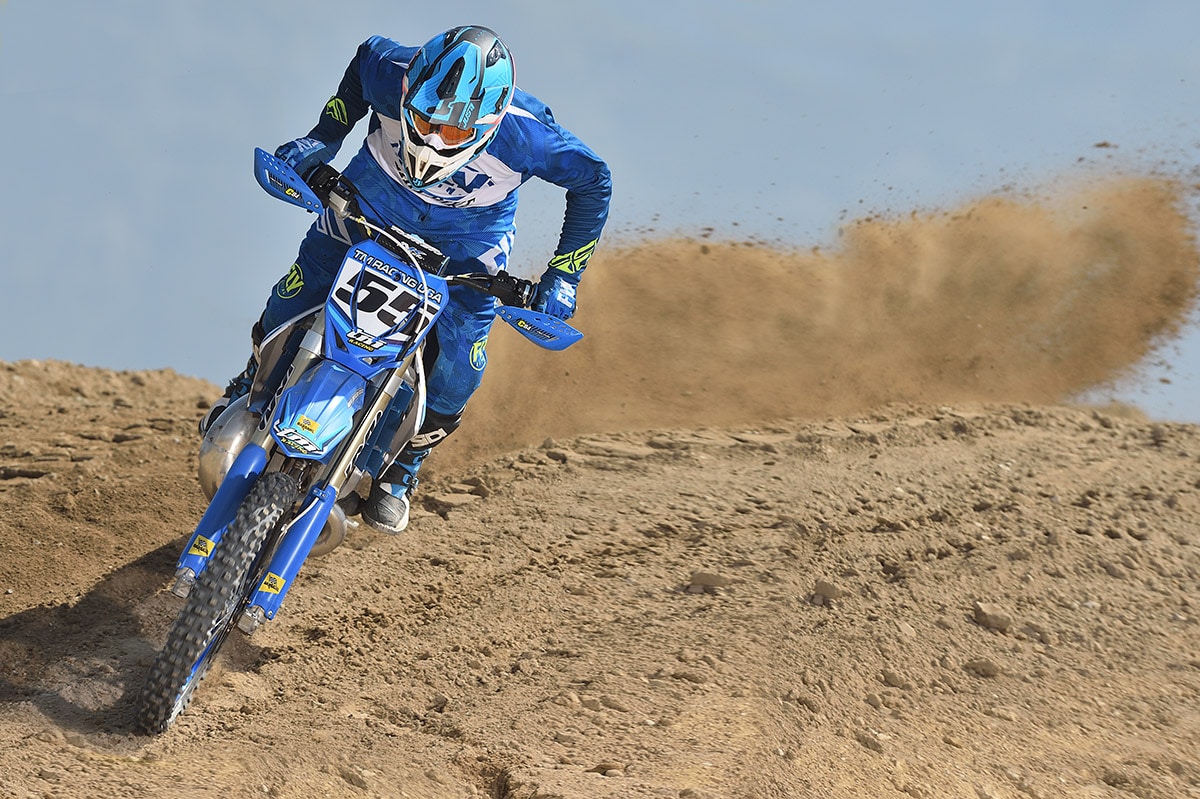 To us, this bike is unlike most other TM motorcycles we’ve ridden. I personally have a long history with the company, going back to the 2000 ISDE, when Kurt Caselli, Luca Trussardi and I rode them on the U.S. team. In general they are very fast, hard-hitting motorcycles–great for pros, but not very forgiving for novices. This one is different. The motor has a smooth, gentle power delivery. It almost feels almost like an enduro bike. It’s not slow, though. We have several other 250 two-stroke motocross bikes in the fleet right now, and the TM can hang with any of them.

Another characteristic of TM motorcycles is a very stiff feel. Part of that is somewhat superficial because of stiff seat foam, but some also comes from a rigid frame. All motorcycles have much more frame rigidity that they did 10 years ago, so it’s almost like the rest of the industry has come around to TM’s way of thinking. Advancements in suspension have enabled motorcycle makers to do this. The TM’s KYB fork is very good, and we’ve even come to like the shock. This wasn’t always the case. When we first tried the TM-made shock, we couldn’t come to terms with it. It still has a very dead, somewhat over damped feel, but it’s easily within the range of adjustability. 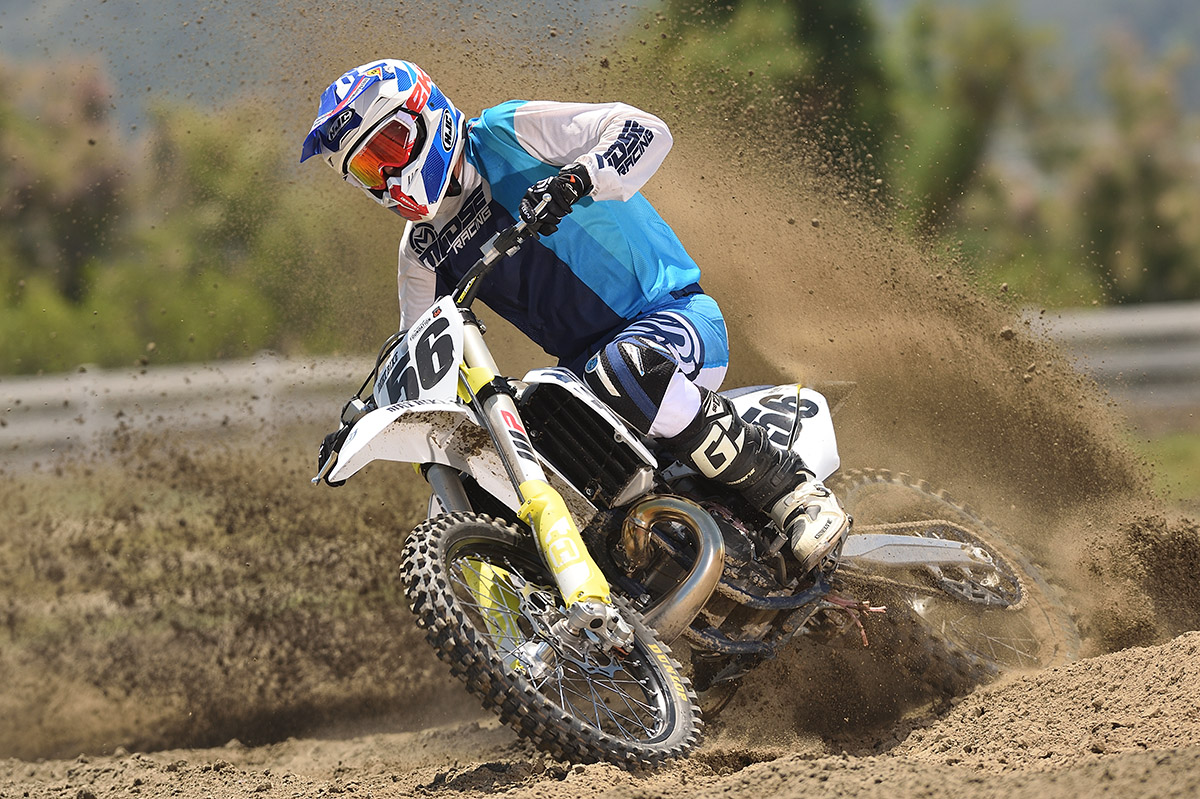 We are amassing two-strokes for a 250 motocross shootout in our August, 2020 print edition. Already we have the four surviving two-stroke players. The TM is the wildcard of the group. The Yamaha YZ250 is here, as well, and of course the KTM and Husky 250s will be involved. We already have a little testing time, but sadly we’re still struggling to get track time. We’ve had the bikes at Glen Helen and Lake Elsinore so far, and as more track open up, we will be there. This weekend, most of the So Cal tracks will be running with restrictions.

We got to ride the new Lake Elsinore Motorsports Park yesterday, and the new management there has done some impressive work. The track was always handicapped by poor soil but they have mixed in a substantial amount of sand. It was much better. The grand reopening is Saturday, operating under some Covid-19 restrictions.  Click on the image to see the announcement. 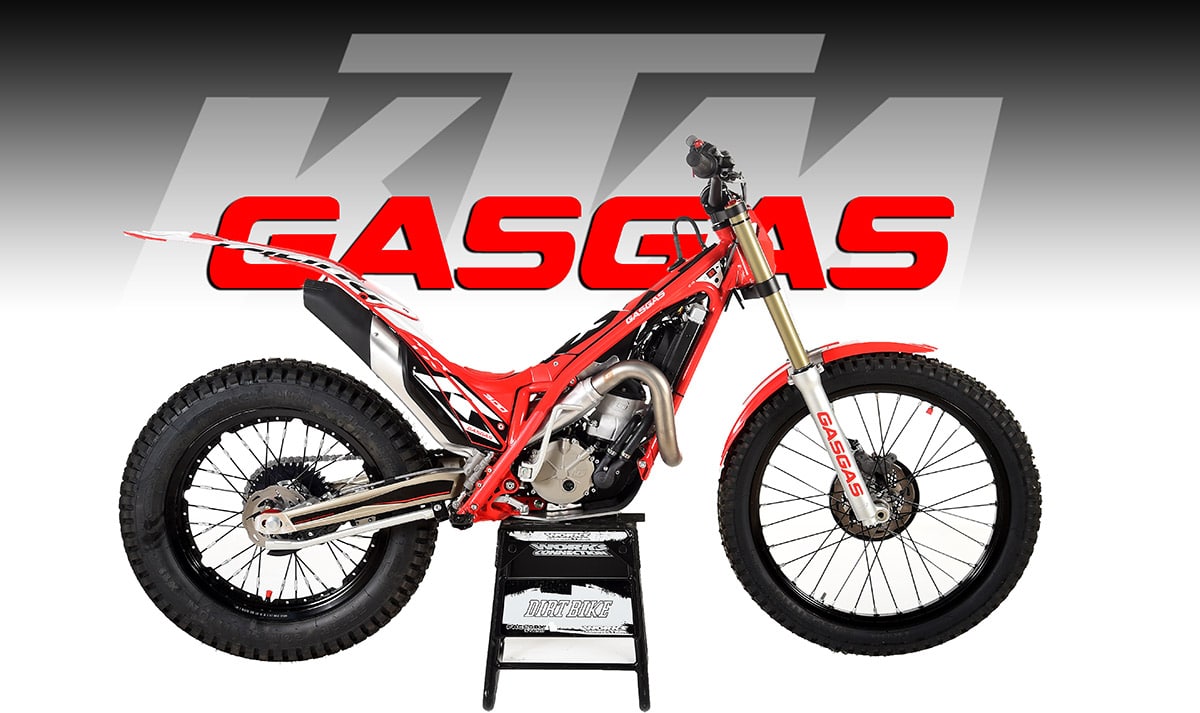 GasGas has now released its first 2020 trials bikes under the flag of the Pierer Mobility Group, aka KTM. These bikes are still manufactured in Spain and have no new KTM parts, and that won’t change in the near future. Down the road, no one will say what’s going to happen. KTM’s factory in Mattighoffen is stressed to max capacity now, and adding another make will not be easy. We wouldn’t be surprised to see more Pierer components on the bike soon, such as WP and Pankl. 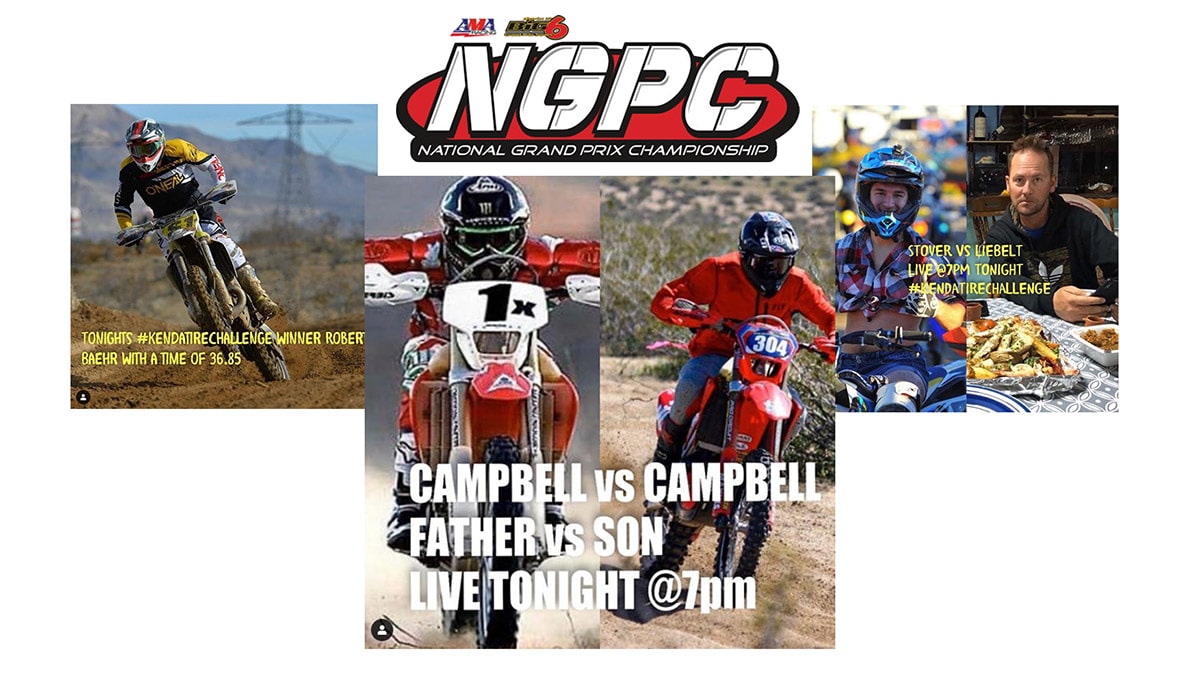 The National Grand Prix Championship Series has been having races every night this week. They’ve been in the garage, though, not on the track, Scott Perkins has been hosting the #Kendatirechallenge live on the organization’s Instagram site. The contestants are asked to replace a rear wheel on the clock in a bracket-style contest. Tonight, Johnny Campbell will go up against Preston Campbell. I think so far, Nick Stover has the best time, around 29 seconds. In general, though, the old guys have been beating the kids. The bracket below has already been revised, but you get the idea. Tonight it happens at 7:00 p.m. 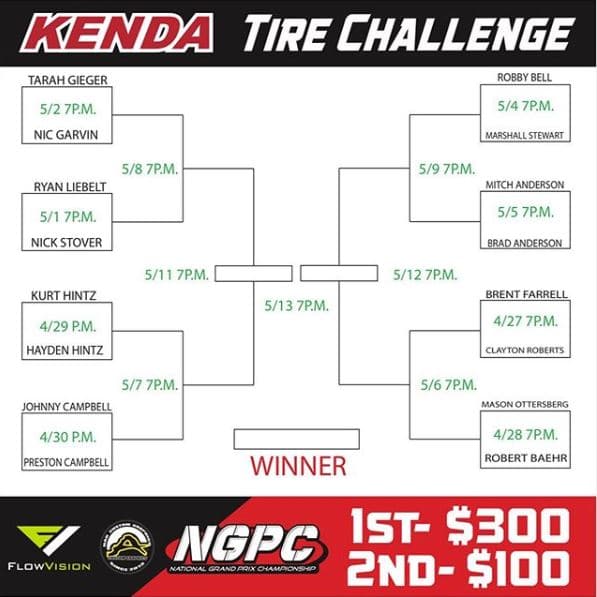 The NGPC race is still on the schedule for later in the month of May in Mequite. This isn’t confirmed yet. The track, as I understand, is in the state of Arizona, which has loosened up its restictions, The hotels, however, are in Nevada and still locked down. There should be an announcement coming soon.

Mammoth Motocross announced the cancellation of the 2020 event, originally scheduled for late June. Most of the Road To Mammoth qualifiers had already been canceled. This is what appeared on the website yesterday:

With guidance from local and state agencies and out of an abundance of caution for our thousands of racers, fans and community, we are sad to announce the cancellation of the 2020 Monster Energy Mammoth Motocross presented by Lucas Oil.

This pandemic has affected everyone, and like you, we were hopeful that the timing of the event would line up with a lifting of restrictions on gatherings, but this is not the case. The Mammoth Motocross has been a mainstay in the community for 52 years, and we are going to greatly miss our moto family this June. While we wait this one out, we are looking forward to hosting the event in 2021. Stay well.