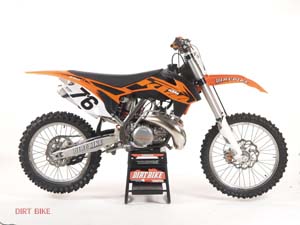 After every war there are soldiers who refuse to surrender. To this day, there’s probably a 90-year-old sailor hiding out on a South Pacific island, awaiting orders from Tokyo. Every track in America has two-stroke motocross riders like that. They cling to their 10-year-old bikes, thinking that the war is still on, refusing to concede that four-strokes have won.
They might not be crazy. The 2013 KTM 250SX is a two-stroke, and it’s a great motocross bike. It has continued to evolve, matching the development of KTM’s four-stroke line step for step. Now, the 250SX is enjoying some low-key success and attention. It has become the flagship for a growing number of believers who think the two-stroke will rise again. They might be right.
TWIST IT
It’s possible–likely, even–that no two riders will have exactly the same take on the 250SX. There are two distinct camps in motocross today: those who have ridden 250cc two-strokes and those who haven’t. You might be hard-pressed to find a rider under the age of 25 who has been on a two-stroke since he left the mini class. If you’re one of those riders, you’ll be stunned by the sheer power of the 250SX. It’s a rocket. The peak power and even the torque of the KTM are in the same league as a 450cc four-stroke. The key difference is the powerband. The two-stroke comes on more abruptly and signs off earlier. That’s a universal two-stroke thing. What sets the KTM apart from old-world 250cc two-strokes is the fact that it makes more power and it’s less abrupt. The first part of that isn’t surprising; the KTM 250 was always the fastest bike in its class, and it hasn’t gotten any slower. The second part is the result of hard work. In the period since the other 250s were frozen in time, KTM has made steady improvements on the power delivery. The 2013 version of the bike might actually feel slower than an example from 10 years ago, but in truth, the low-end power has improved so much that the hit feels mellower. A KTM 250SX from the early 2000s could only stay with a 450cc four-stroke on a smooth, tight track with perfect traction. Now, traction doesn’t have to be so good. The KTM hooks up surprisingly well.
Still, let’s be real. Even the most fanatical two-stroke lover will concede that the smoothest two-stroke is a gnarly, hard-hitting monster compared to a four-stroke. The result is that you have to work a little harder. You have to shift more often, hold on tighter, and you can’t get away with being lazy. On the 250SX, you can’t fake it when you’re tired by clicking into a super-tall gear and loafing around the track just below the powerband. You won’t go anywhere. The flip side is that you won’t be nearly as tired at the end of a hard-fought moto. Despite the hard hit, you can ride the 250SX harder and longer than almost any other bike this side of a 125. It’s a feather. The 250SX makes you realize how much strength it takes to ride a 450. Even though the KTM gained a little weight in 2012, it still weighs almost nothing. You can brake harder and dig deeper when you aren’t carrying around 20 pounds of cams, flywheels and valves. All those rotating and reciprocating parts only add to the sensation of weight, making a four-stroke feel much heavier than it really is.
This year the 250SX’s overall handling takes a big step forward. The stink-bug feel is gone, and that gives the bike much more stability. Headshake is calmed down to almost nothing, and the bike doesn’t wander in hard braking bumps like it did. You would think that its cornering would suffer, but even that’s improved. The suspension changes for 2013 get a thumbs up, but the suspension is still the bike’s weakest point. That’s the one thing that kept the Yamaha YZ250 in the game this long; it always had phenomenal suspension. The KTM isn’t there yet. The front has the best WP fork in history. It’s good on little chop and stands up to hard hits. Most riders will take out a few clicks of compression and be happy, but it’s still not in the same league as the Yamaha front end. It delivers more impact to the rider, especially on flat landings, and there’s no magic clicker position.

The rear end is a little more versatile. The 250SX starts off with the same disadvantage that all two-strokes have. It’s a two-stroke. There’s something about the power delivery of a four-stroke that makes the rear suspension work better. It probably boils down to all the things that make a four-stroke harder to handle: flywheel effect, overall weight and so forth. A two-stroke can’t hold a straight line through rough terrain nearly as well as a thumper, and the 250SX is no different. It seems to stop at each hole and lose forward drive. The 2013 model still represents a big step forward for KTM, though. You can work with the rear shock and come up with a setting that performs well for any given track. Hard-packed, choppy holes take a little less compression damping. Big whoops take a little more. At the end of any given ride, you’ll have something that’s pretty good, but the suspension still won’t work quite as well as that of any of KTM’s own four-strokes.

RUNNING ON PREMIX
Our test bike was a little lean as delivered. If you have a good fuel source and can find something better than the usual 91-octane pump swill, it would probably be fine, but we installed the optional rich needle from the parts kit. This made the powerband a little smoother and eliminated occasional hints of detonation.
We love the little improvements that KTM has made. The gas filler is huge and doesn’t have that dumb button anymore. The rear axle is bigger and now takes the same size triangle stand as everyone else. The clutch pull and feel are excellent. And, as always, the brakes are phenomenal.
At end of the day, the KTM 250SX has nothing but fans. It’s a bike that leaves everyone wondering, ‘What happened to us?’ Sure it has its shortcomings, but it offers so much that, by all rights, it should have more competition. There should be dozens of modern 250cc two-stroke motocrossers. But there aren’t. We’re betting that this will change very soon.
UPPERS
Great power
Lightweight
Easy maintenance
Light clutch pull
Excellent brakes
Good ergos
DOWNERS
Harsh suspension
Hard hit
One of the last of its kind
KTM 250SX
Engine type Liquid-cooled, power-valve
2-stroke
Displacement 249cc
Bore & stroke 66.4mm x 72.0mm
Carburetion 36mm Keihin PWK
Fuel tank capacity 2.0 gal. (7.5L)
Lighting coil No
Spark arrestor No
EPA legal No
Running weight, no fuel 215 lb.
Wheelbase 58.1′ (1476mm)
Ground clearance 15.2′ (385mm)
Seat height 39.1′ (992mm)
Tire size & type:
Front 80/100-21 Dunlop MX51
Rear 110/90-19 Dunlop MX51
Suspension:
Front WP inverted cartridge, adj.
reb./comp., 12.4′ (315mm) travel
Rear WP aluminum piggyback, adj. prld,
hi & lo comp., reb., 12.6′ (320mm) travel
Country of origin Austria
Suggested retail price $7099
Distributor/manufacturer www.ktmusa.com
Share FacebookTwitterGoogle+ReddItWhatsAppPinterestEmail