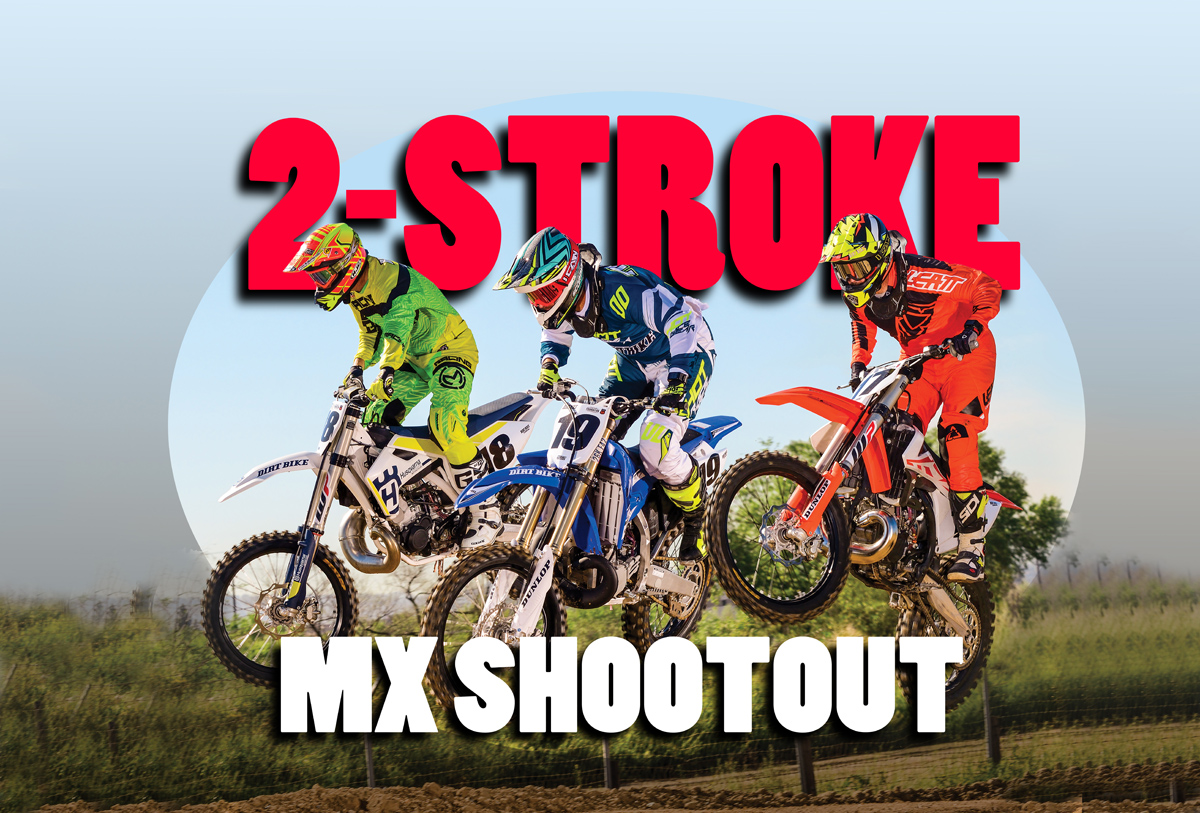 Share FacebookTwitterGoogle+ReddItWhatsAppPinterestEmail
This year the KTM 250SX and the Husqvarna TC250 are completely new, and Yamaha invested in the YZ250 with new suspension and updated styling just two years ago. That’s far more attention than these bikes had received in the previous 10 years combined, plus there’s more news on the horizon. It all adds up to one undeniable fact—two-strokes are back.
YAMAHA YZ250
Our last full-250 two-stroke motocross shootout was in November of 2006. It dealt with six 2007 models, and the Yamaha emerged as the favorite. We didn’t know it at the time, but that would be the last year for a full class of two-strokes. Honda, Kawasaki and then finally Suzuki just gave up, creating a climate in which Yamaha didn’t have to update the YZ. Since then, it has sold just well enough to justify its existence, receiving small changes annually. In 2015 Yamaha felt a rising tide of two-stroke interest and gave the YZ a new fork and new bodywork.
In case you’ve forgotten, the YZ250 is typical of the two-strokes that dominated the motocross world a generation ago. It has a power-valve, case-reed motor with a five-speed gearbox. It has Yamaha’s first-generation aluminum frame with a center backbone. The four-stroke frames were completely different and went through several big changes, while the YZ250 remained the same. The suspension, however, did change in those years, usually keeping pace with the four-strokes. Currently, the bike has the latest version of the KYB SSS fork. The weight hasn’t changed in a number of years; it’s 219 pounds without fuel.
KTM 250SX
KTM rocked the two-stroke world with a new line of two-strokes this year. The motor in the 250SX is the progenitor of a whole family of engines that power the majority of the motorcycles produced by KTM in 2017. For that matter, it’s not that different from the recently announced EFI motor that will debut for 2018. This version has a 38mm Mikuni TX carb and a case reed. It doesn’t get the electric start that the off-road versions have, but it does have a balance shaft and the DDS diaphragm-spring clutch. That clutch is hydraulically actuated with a Brembo master cylinder.
The new frame doesn’t look all that different from the previous one, but it is a touch shorter and has a steeper head angle. The rear suspension geometry is different. The shock itself is new, and the front end has a WP AER 48 air fork. That last tidbit is the item that really brought KTM fans alive this year. The fork was actually designed by engineers in Austria, whereas most previous WP forks were carry-overs (in most aspects) from earlier Dutch products. Without fuel, the KTM weighs 211 pounds on the Dirt Bike scale.
HUSQVARNA TC250
Every bike in the Husqvarna line has a counterpart in the KTM line. Some are almost identical; some are very different. The TC250 falls somewhere in the middle of that continuum, having more Husky-only parts than the minis but not as many as the dual-sport bikes. All Husqvarnas have their own bodywork, seat and graphics. The most important substantive change on the TC250 is the airbox, which is built into the subframe. This design goes back to the Husaberg days and has been refined over the last five years. At first the airbox was heavier and more restrictive; now those issues have been addressed. There are still differences in the way the airbox affects performance. Husqvarna also uses a Magura clutch master cylinder, D.I.D. Dirt Star rims and a different handlebar. The suspension, frame and engine are all the same as the KTM’s. At 211 pounds without fuel, so is the weight. 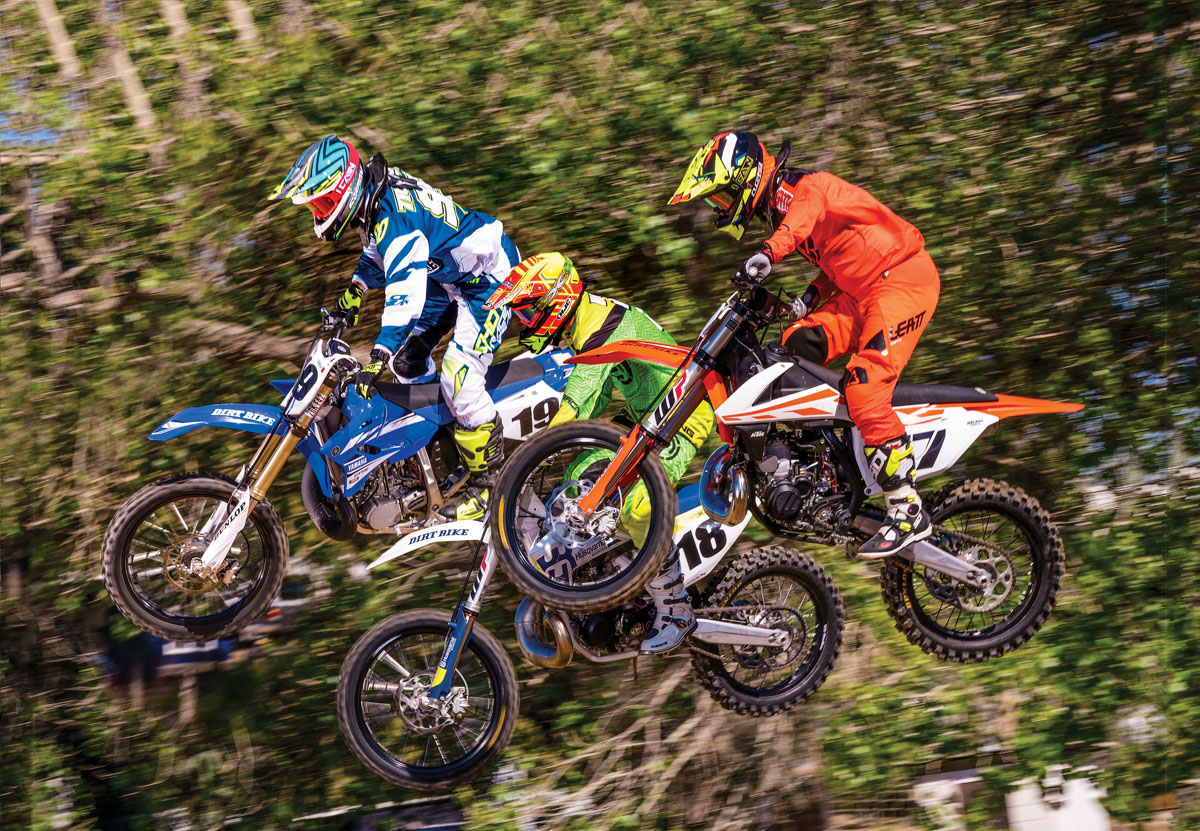 THE POWER POINTS
As you’ve probably heard by now, the motor in the new KTM is a rocket. So was the old one. The KTM 250 has been the horsepower champion for a long time in the 250 class, and that won’t change now. It makes more power sooner than the Yamaha, then pulls harder in the middle and revs higher. If motocross races were held on a dyno, the KTM would always win. The problem with all that power is that it hits very hard. It tends to be all or nothing, and you have to be on top of your game to use it all. For a really big jump, everything is great; you gas it hard and fly as far as you can. On medium-size jumps, it’s hard to regulate the power and not over-jump. If you up-shift and try a taller gear, you risk having the hard hit come at the wrong time.
Even though the Husqvarna shares the same motor, it has a milder hit. It still makes a ton of power, but the TC250 is a little easier to handle and seems to work better at partial throttle openings. The only real difference is the airbox, so it still might be more restrictive than the KTM’s. Neither bike is as easy to manage as the Yamaha. The YZ250 is a puppy dog playing with two pit bulls. It’s fun and fluffy, but it risks getting eaten alive in sheer acceleration. Sometimes that’s a big deal; sometimes it’s not. On rough tracks with poor traction, the Yamaha can put more of its power to the ground. On a well-groomed track with moist dirt, the KTM and Husky are going to get away. Rider skill plays a big part here.
There are ways to soften the power delivery of the two Austrian bikes. The power valve has optional springs as well as an adjuster. The optional springs control how quickly the valve opens. The adjuster acts on a different spring and affects when the power valve opens. We found that the stock preload (one turn in) is generally the smoothest hit if used with the standard spring (yellow). With the green spring, the preload can be turned counterclockwise as much as a half turn, and that combo tends to broaden the meaty part of the powerband. You have to be careful, though. Most settings only make the hit harder. When you go to a new track, everything will seem different. It’s much easier to make progress with jetting. The Mikuni carb is a little lean on the bottom and rich in the middle. You can go down the rabbit hole of trying to find the perfect needle, or you can call JD Jetting and get a kit. JD doesn’t publish its needle specifications, but the kit has options and good instructions.
Making the Yamaha a little more pit bull-like is also possible. Both FMF and Pro Circuit have pipes that wake up the powerband. Then there’s port work. The Yamaha motor has been around so long that most shops have port specs, and getting more power isn’t that hard. The catch here is that most good porting specifications will result in a bike that needs race gas. Welcome to the world of trade-offs. 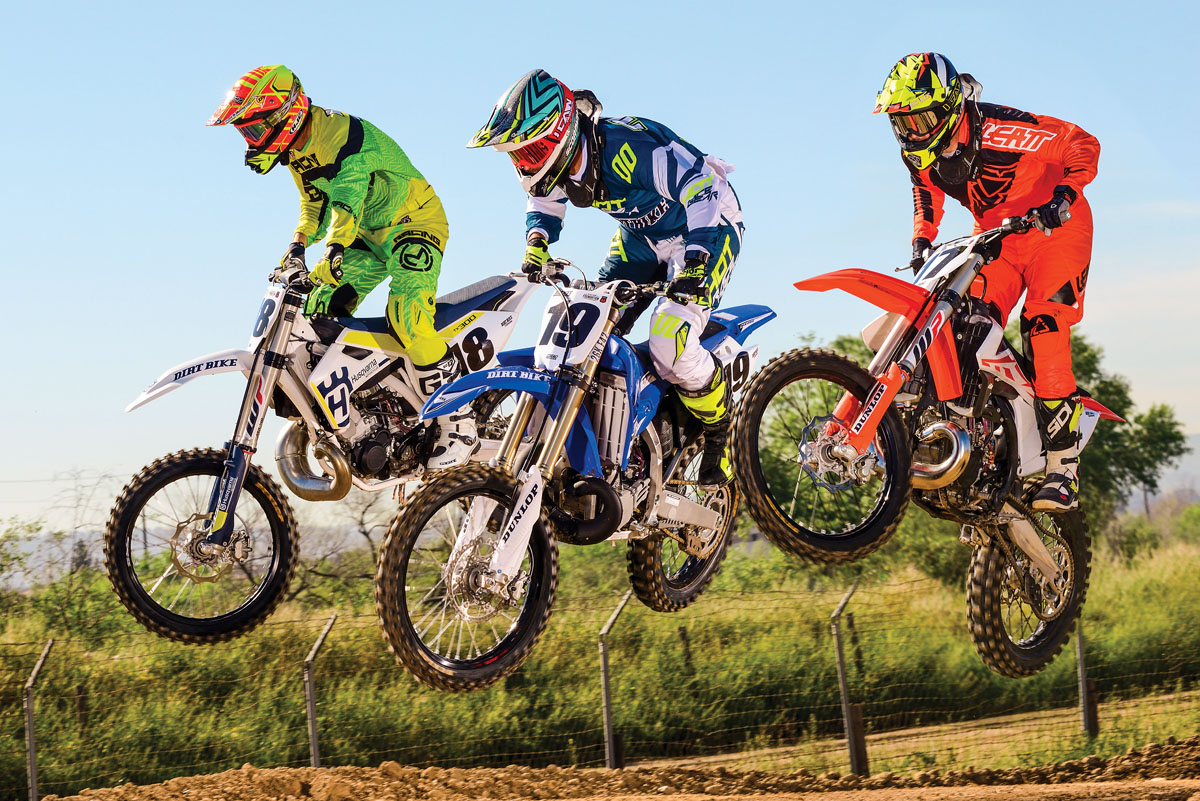 THE HANDLING GAP
One of the reasons that Yamaha engineers didn’t do much to the YZ250 for over 10 years was because they didn’t have to. It handled so well that nothing else mattered. Those days are gone. The new WP AER 48 air fork brings KTM and Husky out of the dark ages. This is like giving cell phones to ancient Assyrians. Is it better than the fork on the Yamaha? No, not in all applications. But, the fact that it has an infinitely adjustable spring rate makes it much more versatile. In stock form the Yamaha’s KYB fork is cushy, plush and has excellent bottoming resistance. It is, however, a little too soft for pure motocross. With stock air pressure (148 psi or 10.2 bar), the KTM and Husky forks can deal with big hits and hard landings much better. Then, when you ride a smoother track, you can drop the pressure as low as 135 psi. You can never quite duplicate the Yamaha’s feel for sheer comfort, but you can come very close.
In terms of overall handling, all three bikes are excellent. The Yamaha is more stable in rough stuff, while the KTM and Husky are more agile. The Yamaha’s extra weight is a factor that most riders say they can feel. This is even more noticeable under hard braking because the KTM and Husky brakes are much more powerful than the Yamaha’s. 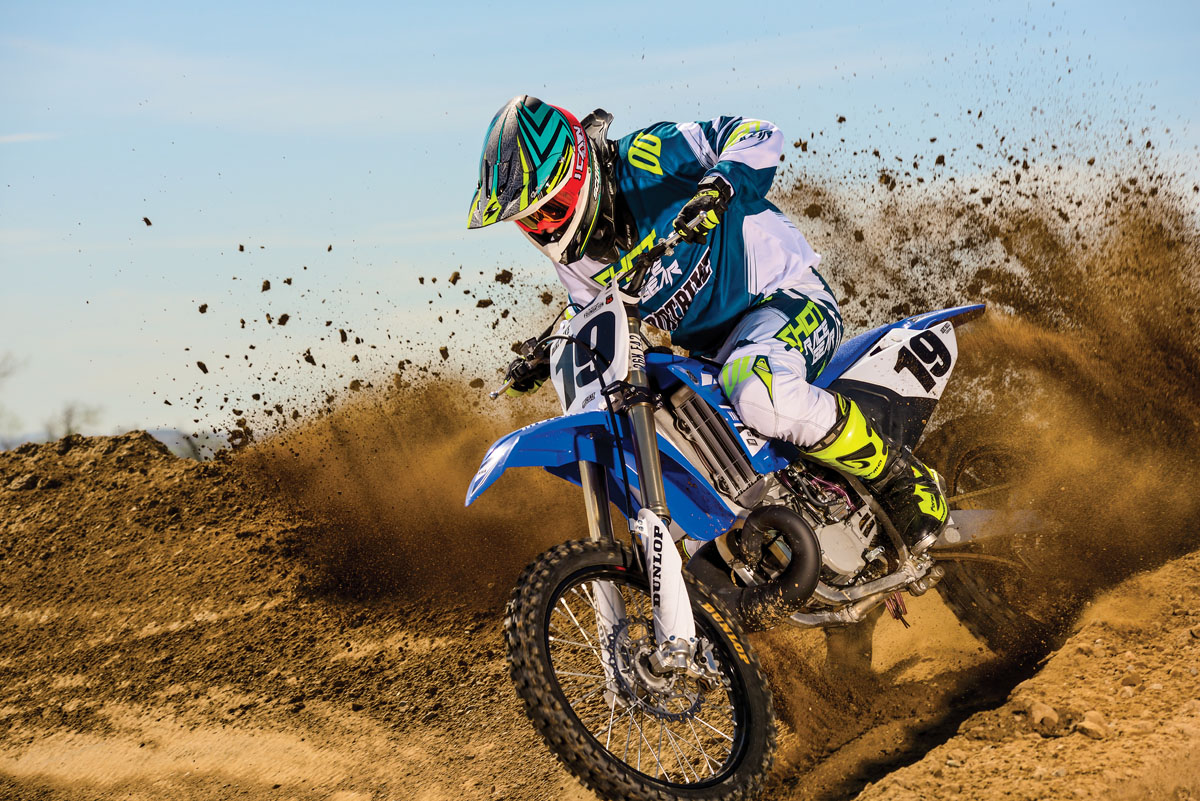 OTHER FACTORS
We’re not sure why Japanese two-strokes never came with balance shafts. To be honest, we didn’t think it was necessary until now. The KTM and Husky have such vibration-free motors that the Yamaha suddenly feels shaky by comparison. Conversely, the Yamaha’s jetting is so perfect that the two Austrian bikes feel sputtery. It’s all relative.
After 20 years of waiting for Japan to get on the hydraulic-clutch bandwagon, we’ve given up. The Yamaha has the best clutch of any Japanese bike, but the clutches on the KTM and Husky are better. They have excellent feel and a light pull, plus they stand up well to abuse and overheating. 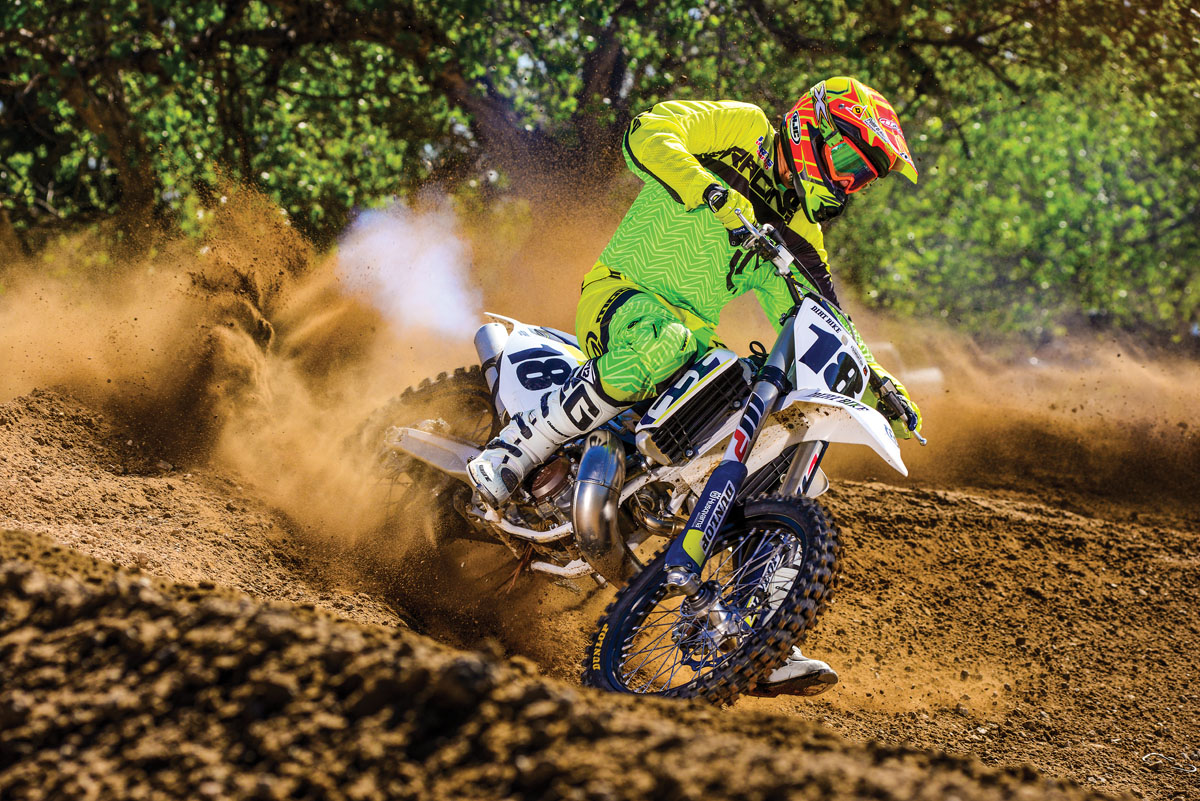 In the face of so many compounding factors, the Yamaha’s reign as a competitive racer, even among two-strokes, is in serious doubt. These bikes are sold as closed-course competition motorcycles, and using that description as the sole criteria, the YZ250 is outgunned. It’s slower, heavier and ill-equipped to race against the more modern KTM and Husky. Of those two, the Husqvarna’s slight differences give it enough of an edge to make it the official winner when it comes to racing.
With all that settled, we have to also point out that even though two-strokes are enjoying a big revival, they still aren’t necessarily being used for racing. Most never see the track and instead are used for weekend rides and practice-track heroics. In that world, the Yamaha is still king. It’s a gentler, more forgiving motorcycle; in other words, it’s more fun. Frankly, it makes us hope that Yamaha doesn’t do something unthinkable. Like change it. 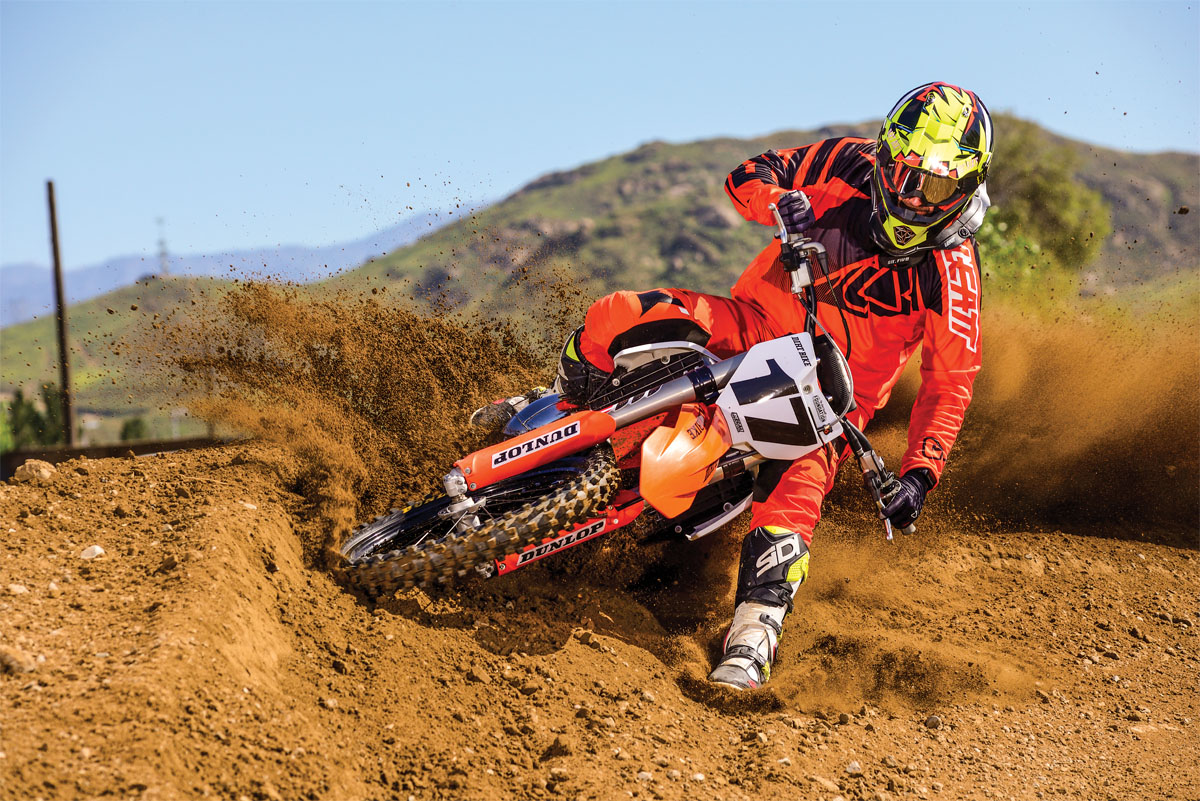