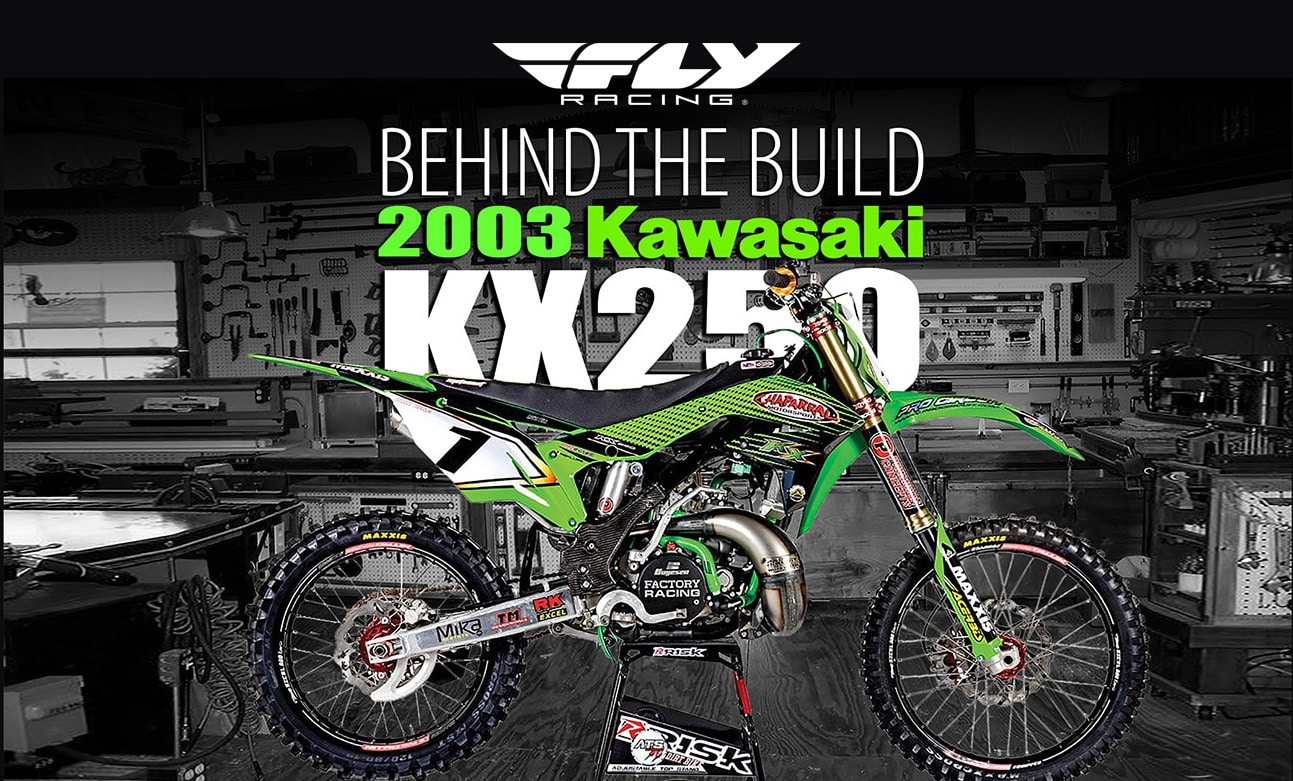 Going into the 2019 Wiseco Two-Stroke World Championship, Zach Bell was the defending champion and had the right to wear a big number one plate. The only problem was that he didn’t have a bike. He had switched from Husqvarna to the factory Kawasaki-supported Precision Concepts race team between seasons. Well, as you know, Kawasaki no longer makes a two-stroke race bike, so team manager Robby Bell and head mechanic Phil Valdez had to come up with something.

DREAMS BECOME REALITY
The first priority for the project is to make it look like a modern-day KX race bike, and to do that, the Precision Concepts team had to dream big! A list of newer OEM Kawasaki four-stroke parts were needed to make this happen. A 2019 KX250 four-stroke subframe was crucial to the build’s success, and it doesn’t just bolt right on. Brackets were fabricated for the left-hand-side lower mount and the top mount where it connects to the frame right above the upper shock mount. These pieces are CNC-machined out of billet aluminum and designed to withstand punishment by current Pro Circuit race team mechanic Jon Primo.

Once mounting of the subframe was squared away, the next task at hand was modifying the airbox and intake boot system. The main plastic box part of a 2019 KX250 four-stroke was used and combined with the intake boot off the 2003 KX250 model.
Another key element to the success of the project was being able to use the stock gas tank off a 2019 KX250F. The gas tank received no major modifications, aside from a few CNC-machined mounting brackets and the fabrication of an aluminum adapter plate with petcock mounting capabilities filling in the area where the EFI fuel pump was located. The top tank mount on the frame up by the triple clamps was a similar location on the 2003 two-stroke to the 2019 four-stroke models, but was off just enough to need a new mounting bracket.

With the four-stroke subframe and tank being used, mounting on the 2019 seat and plastics was pretty straightforward, and the change in appearance was substantial. A few adapter brackets had to be fabricated to lower or raise the mounting points of the radiator shrouds. A completely new bracket was fabricated and machined out of billet aluminum to mount the Pro Circuit R-304 silencer.

Suspension on Zach’s KX250 was drastically upgraded as well. In fact, the entire front end is off his 2019 KX450 race bike. Surprisingly, there was only two modifications needed to adapt the 2019 components. A 2018 KX450 Xtrig steering stem was pressed into 2019 clamps, because it is slightly shorter than the 2019 version and the steering stop on the 2003 KX250 frame had to be modified to be used with the newer clamp setup.

Out back the shock is an A-kit unit that the Pro Circuit race team used on their 2003 race machines that was completely rebuilt to Zach’s race specs. Our last chassis upgrade came in the form of a complete set of wheels from Dubya USA featuring Talon billet aluminum hubs, stainless steel spokes and black Excel A-60 rims. This is the same setup that the Precision Concepts race team runs on their off-road four-strokes.

Although most of the drastic changes were made updating the look, we did save one major surprise for the engine. We enlisted the help of Mark and the crew at L.A. Sleeve for adding a little get-up-and-go for our KX; after all, go big or go home, right? L.A. Sleeve has been in the engine business for a long time, and along with repairing cylinders, they also have a wide variety of big-bore options available for two-strokes.

Zach’s race bike would gain 20cc, making it a total of 270cc. The ports were cleaned up, but nothing insane was done to them. We added a Boyesen Rad valve system, ignition cover, clutch cover, Supercooler and a Pro Circuit exhaust to help increase the ponies as well. If you look close at the spark plug cap, you can see some factory parts somehow made it on this build as well. Moving forward, this bike would run on VP race gas only.

Even with over a month into this build, the crew at Precision Concepts didn’t have much time in testing the finished product. So, we basically got a chance to ride their first draft and, boy, were we surprised! The engine has a ton of torque down low, something that caught us off guard, because that’s not what we remember the 2003 KX250 being known for. We liked it at tighter, more Supercross-style tracks, but at Glen Helen, it just seems to run out of pull a little too soon, and vibration was increased.

With the bike being set up for Zach, who is maybe all of 145 pounds all geared up, it was tough to find a test rider who could match his size and speed, but we just happened to have Sean Lipanovich on staff who is close in both. We aren’t completely sure why, but all of the test riders feel universal about the 450 front end making the bike heavy and giving it a sensation of dropping in the front when jumping. But other than that, we liked the overall handling. With an updated look and improved performance, we would say that this build was a success. Even though Zach wasn’t able to defend his title triumphantly because of some technical issue, he still looked fast and stylish racing it. We hear the team has something really big planned for next year. 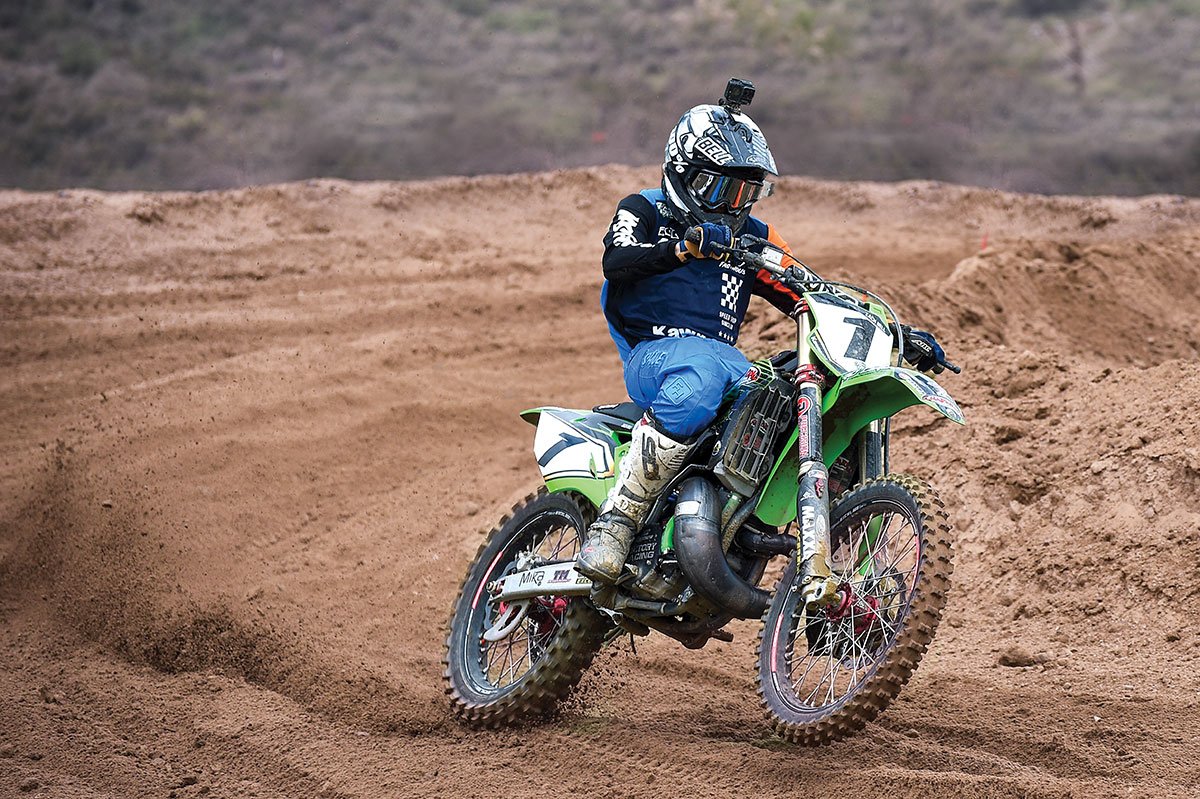