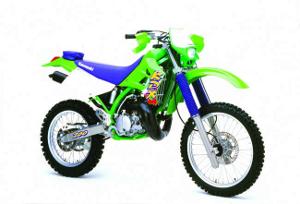 To this day, no one knows what the Kawasaki KDX200 was supposed to be. Was it a beginner bike designed to teach wives and kids the fine art of off-road riding? Or was it a Navy SEAL of a bike built for the toughest enduros and the most grizzled riders? Clearly it was used as both. In its official lifespan from 1983 to 2006, the KDX was an evolutionary alligator, remaining mostly unchanged as eras passed and other bikes became extinct. One of the reasons that Kawasaki engineers made so few changes was because they were afraid they would mess up the magic formula. The KDX sold thousands of units, year in and year out, without any need for reinvestment.
The reason it appealed to beginners is clear—it was light, mild-mannered and inexpensive. The reason it appealed to the hardcore enduro cult has something to do with the off-road war between the states. The rift between East Coast riders and West Coast riders goes back decades. In the east, races were tight and tough. Out west, they were fast and angry. The KDX became the poster bike of the east, while bigger, faster, motocross-based bikes dominated the deserts. Kawasaki clearly didn’t care who was buying the ’DX. It continued to sell, and no other manufacturer really caught on. Aside from brief intrusions on its turf, the KDX200 was in a class of one for years.

1986: Kawasaki gave the 200 a major makeover, again borrowing much from the KX125 motocrosser. It kept its air-cooled cylinder but got a power valve, which was called the Kawasaki Integrated Powervalve System. The bike had a front disc brake, but a drum in the rear. The rear suspension still had a rocker arm on top. These were glory days for the KDX. Kawasaki was alone in the 200 class and virtually alone as a Japanese company offering a two-stroke enduro bike. The price was $1899.
1989: This was the biggest redesign in the long history of the 200. The bike became larger, faster and heavier, which was well received by some, but alienated the beginners who loved the old bike. The motor finally took its own path, diverging from the KX125 of the day. It got liquid cooling and a heavier crank. The frame was based on the 1987 KX125, which had modern-style linkage. The tank capacity was an impressive 3.3 gallons, which added to the bike’s mass. It tipped the scales at 232 pounds without fuel—8 pounds heavier than its previous year.
1991: The KDX was a hit, but it was under fire. Yamaha and Suzuki had 250cc two-strokes, so Kawasaki introduced the KDX250 to take the pressure off the 200 as a first-line enduro winner. But one thing didn’t go according to plan; almost everyone liked the 200 better than the 250.
1995: Kawasaki dropped the 250 and brought the 200 up to date with a new chassis and a new look. This is the form that the KDX would keep for the rest of its days—gone were the bulky tank and fat bodywork. The 1995 model got a perimeter frame and big changes to the suspension. The motor was unchanged for the most part. By this time, the 200 was being measured against more effective competition and clearly needed more motor to maintain its role as an eastern enduro contender. It did, however, regain some of its following among beginners.
1997: After failing to get buyers excited about the KDX250, Kawasaki tentatively stuck its big toe back into the bigger-than-a-200 class by offering a KDX220, in addition to the 200. It had a bigger bore and a smaller carb in an effort to gain torque. The 220 was priced $250 higher than the 200 at $4549. It sold in decent numbers and coexisted with the 200 until both machines were dropped in ’06 due to the coming of more stringent federal emission standards.

RACE HISTORY
The racing history of the KDX200 can be summed up with one name: Jeff Fredette. Let’s be clear; Jeff wasn’t the only one racing the KDX. There were literally thousands of them in enduros all over the country. But Jeff Fredette did things on the KDX that no one else matched on any other motorcycle.
The original 1983 model was the product of Kawasaki’s race effort with Jack Penton and his cousin Dane Leimbach. But Jack and Dane moved on, and Jones Goggles put together a race team that featured Kawasakis for 1983. Fredette had just wrapped up a successful four-year stint on the Suzuki PE175, and he was hired along with Fritz Kadlec. Thus began a string of successes that came to define the KDX. Jeff raced the KDX200 (and later the 220) in the ISDT/ISDE 22 times from 1983 to 2006, finishing every one. That finishing record has never been matched by any other bike or rider. Actually, Jeff’s personal record started on the Suzuki and continues to this day on four-strokes—a total of 31 starts and finishes. On the KDX, he earned seven gold medals and was top American in 1984.
From the mid-’90s on, the ISDE was no longer a KDX kind of race. That is, the race was decided on grass tracks and in special tests that favored motocross bikes. Jeff hadn’t really been involved in the development of the KDX at the factory level, so he set out to remake the bike on his own. He set up a business around motor mods and suspension changes that helped keep the bike competitive far beyond its years. That, as much as anything else, contributed to the long life of the 200. There are so many KDXs still in use that they still form the core of Jeff’s business today.

THE USED MARKET
Oddly enough, good, used KDX200s are hard to find on the used-bike market. They tend to stay within families, passed from father to son or husband to wife. That’s the true miracle of the KDX; its demographic is everyone.
The machine changed so little from 1995 and on that the year is immaterial, only the condition. If you find one in good shape for less than $1600, buy it. You can ride it for a year and sell it again for the same price. If you do buy one, be sure to call Jeff Fredette Racing and ask for his advice.
On Craigslist, the used-bike inventory of pre-1995 KDXs is pretty miserable. You would think that there would be a large number of them with low hours. But if those bikes are out there, they are well hidden. A real gem would be an air-cooled bike from the ’80s.
And that’s the sad legacy of the KDX200. Despite being around for so long, it was killed before its time. The 2006 KDX would no doubt continue to sell well today if the two-stroke trail bike hadn’t been outlawed. It’s a bike that has never had an adequate replacement, and we miss it.

CODY WEBB AND THE KTM FREERIDE