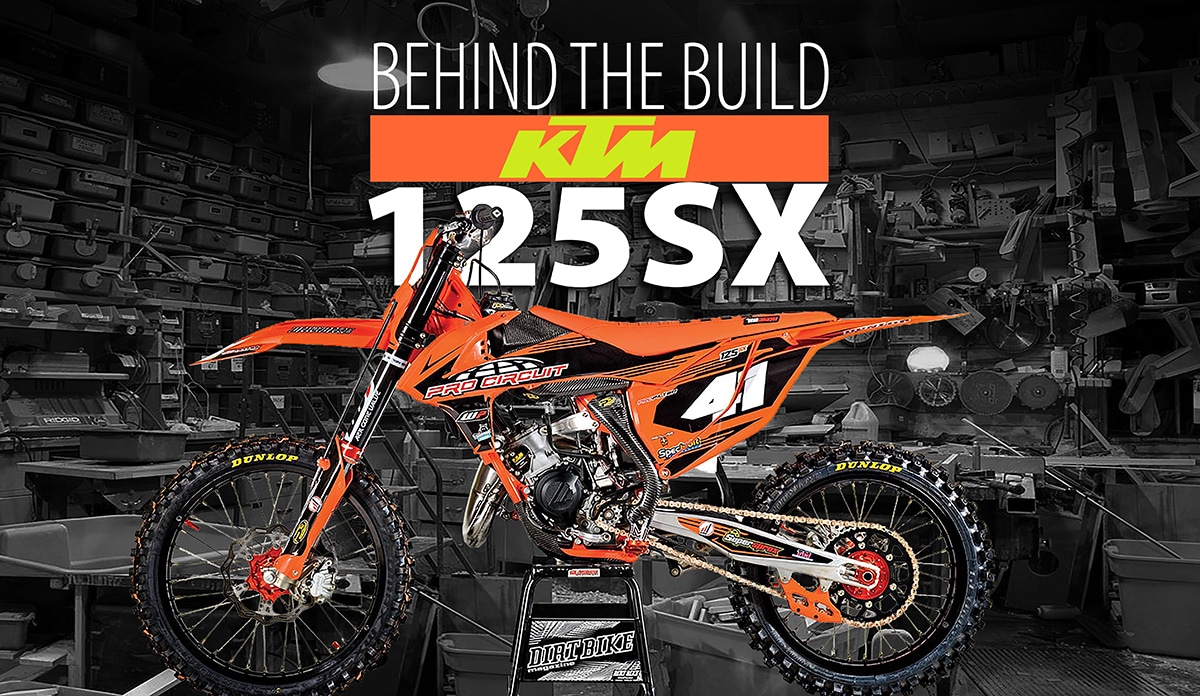 The 125cc two-stroke is alive and well at all levels of racing, with the 125 Dream Race and the MTA Two-Stroke World Championship drawing huge numbers of participants and spectators alike. AMA Pro Racing even jumped on the bandwagon with its 125 All-Star events at select nationals last year. We decided to build a KTM 125SX for test rider Robbie Wageman to burn some premix and have some fun.

Our plan was to start off the build with one of the fastest 125cc production bikes ever made. This project wouldn’t be a complete rebuild; it would just be building on an already solid modern platform. Our KTM did get framed and inspected. All the bearings were greased and reassembled, but no major structural modifications were done.
Although the chassis wasn’t technically modified, we did bolt on some major suspension upgrades from WP North America. Yes, the KTM did come with WP components stock, but they are designed for the average consumer; we wanted something above average for this project.

Up front we went with a WP AER cone valve 48mm fork setup that combines two of WP’s technologies—the cone valve damping system and the AER spring system. The cone valve damping leg is an evolution of the traditional cone valve fork with damping optimized for use in combination with an AER spring leg.
WP-Trax shock absorbers have a very compact system in the bottom mounting fork of the shock that is designed to improve the grip of the rear wheel. The Trax system registers when the rear wheel has no ground contact and immediately opens an oil bypass so that the rebound can expand faster than is possible with a conventional system.

The engine was a different story altogether. Mitch and the crew at Pro Circuit were in charge of making power. We retained the stock bore and stroke, keeping the bike legal to race in any 125cc class across the country. No cheater engine here. The cylinder was ported, and the head was milled by Mitch Payton himself. Mitch actually did it two or three different times, being a little conservative the first two times and making sure to keep the reliability of the engine in place.

We wanted power, but we also didn’t want to be tearing the motor down after every ride. Pro Circuit has special pistons made by Vertex that use specs designed in-house to complement the engine work. These pistons are built exclusively for Pro Circuit and can only be purchased through them. We asked for some additional information and were sternly rebuffed. The only other major internal engine modification was a Rekluse Core Manual clutch system machined out of billet aluminum. These clutches are designed to increase oil flow and reduce fading under heavy use.
With all the heavy modifications out of the way, we focused on some much-needed bolt-on items. We used items from AMP, Specbolt, Mojo, Supersprox and others that gave our KTM a nice, clean look and improved durability.

In the hands of a top professional, this bike is a missile, and Robbie Wageman’s race results at multiple events are solid proof of that. Wageman dominated the MTA Two-Stroke World Championship’s 125cc Pro class with two huge holeshots and led both motos. At the opening round of the AMA Pro Racing 125 All-Stars event, Wageman won his qualifier and was able to come through the pack and finish just off the podium in fourth place against a very stacked field of riders. Now, in the hands of a mere mortal, the bike is still a blast to ride. Granted, it is a little harder to keep in the sweet spot of the powerband, but once there the bike has no problem leaving anything else in its dust.
If you’re looking for a legal 125cc engine performance package, we highly recommend Pro Circuit’s mods. VP MXR02 fuel is required. It’s definitely not cheap, but it’s worth it! The WP suspension components made a big difference in handling. The AER 48 Cone Valve fork provided tons of adjustability, offering a plush feel throughout the stroke (compared to the standard AER fork) while retaining good bottoming resistance. The Trax shock took some getting used to, but once dialed in, it has a much more connected-to-the-ground feel than the stock unit, especially under acceleration. The price tag for new suspension can be a little shocking, but compared to most A-kit-style setups, the WP components are relatively affordable. The one problem we have with this build is giving the bike back to KTM later this year.