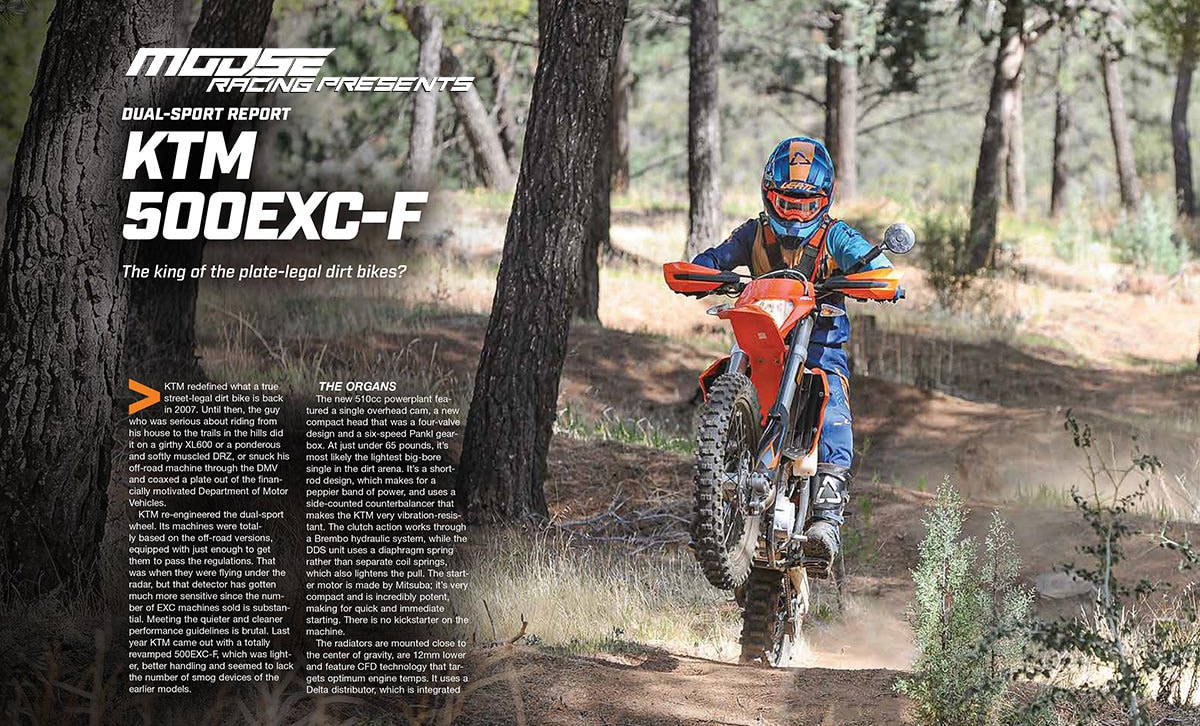 KTM redefined what a true street-legal dirt bike is back in 2007. Until then, the guy who was serious about riding from his house to the trails in the hills did it on a girthy XL600 or a ponderous and softly muscled DRZ, or snuck his off-road machine through the DMV and coaxed a plate out of the financially motivated Department of Motor Vehicles.

KTM re-engineered the dual-sport wheel. Its machines were totally based on the off-road versions, equipped with just enough to get them to pass the regulations. That was when they were flying under the radar, but that detector has gotten much more sensitive since the number of EXC machines sold is substantial. Meeting the quieter and cleaner performance guidelines is brutal. Last year KTM came out with a totally revamped 500EXC-F, which was lighter, better handling and seemed to lack the number of smog devices of the earlier models.

THE ORGANS
The new 510cc powerplant featured a single overhead cam, a new compact head that was a four-valve design and a six-speed Pankl gearbox. At just under 65 pounds, it’s most likely the lightest big-bore single in the dirt arena. It’s a short-rod design, which makes for a peppier band of power, and uses a side-counted counterbalancer that makes the KTM very vibration-resistant. The clutch action works through a Brembo hydraulic system, while the DDS unit uses a diaphragm spring rather than separate coil springs, which also lightens the pull. The starter motor is made by Mitsuba; it’s very compact and is incredibly potent, making for quick and immediate starting. There is no kickstarter on the machine.
The radiators are mounted close to the center of gravity, are 12mm lower and feature CFD technology that targets optimum engine temps. It uses a Delta distributor, which is integrated

into the frame for efficient flow from the cylinder head to the radiators. It also comes with a radiator fan that kicks in when the engine gets too hot.

Fuel-injected, the 500EXC-F uses a Keihin engine management system fit with a 42mm throttle body and a sealed ECU that provides different maps for each gear, depending on input from sensors. In the exhaust department, the machine finally features a removable mid-pipe (you can remove the shock far easier) and now uses an O2 sensor in the header. This makes it a closed-loop EFI system, allowing the ECU to modify its fuel table based on readings from the O2 sensor.

Out back, the muffler resembles the units used on the XCF-Ws but with an additional screen on the end of the exhaust. The muffler is short, pretty hefty and ridiculously stealthy. You can remove the end cap, but the final baffle is fixed in place. KTM fits a reed valve into the air intake (between the air filter and the throttle body) that is designed to help stifle the decibel level.

This machine received the same frame, bodywork and engine updates that the motocross bike got in 2019. Suspension-wise, it’s fit with a 48mm-diameter WP Xplor fork. It’s a split fork design where each side is fit with springs but has separate damping functions. Compression damping is on the left, and rebound damping is on the right. Adjustments are done by dials on top of the fork tubes. The fork has an updated mid-valve piston for more consistent damping and has new upper fork caps and clicker adjusters for easier adjustment with a new color and graphic design. The goal of the updated valving is to keep the front end higher for better control and improved bottoming resistance.

In the backyard, the rear suspension uses a WP Xplor shock with the link-less PDS (progressive damping system) rear suspension design. This has been a staple on KTM’s off-road line. The PDS design is lighter and offers easier maintenance and good rock clearance. The damper has new valving and improvements to the secondary piston for better bottoming resistance. It uses a progressive spring and has adjustable high- and low-speed compression and rebound damping clickers.

As with KTM’s entire line, the hubs are CNC-machined and are laced to Giant rims. The spoke nipple is stronger, requiring less maintenance. Both brakes remain Brembo and are considered class leaders in feel and stopping strength. The tires are Continental TKC80s—not a strong player in our dirty minds. The handlebars are Neken (tapered bulge, no crossbar) with four-position adjustability. The triple clamps are cast items (not CNC-machined), and the grips are lock-on ODIs.

With the bodywork, the EXC looks just like the latest motocross bike but with lights and DOT equipment. The fuel tank is larger (2.25 gallons versus 1.6), and handguards are standard equipment. Unlike on the motocross bike, there’s no map switch on the handlebar, no traction control and no launch mode. 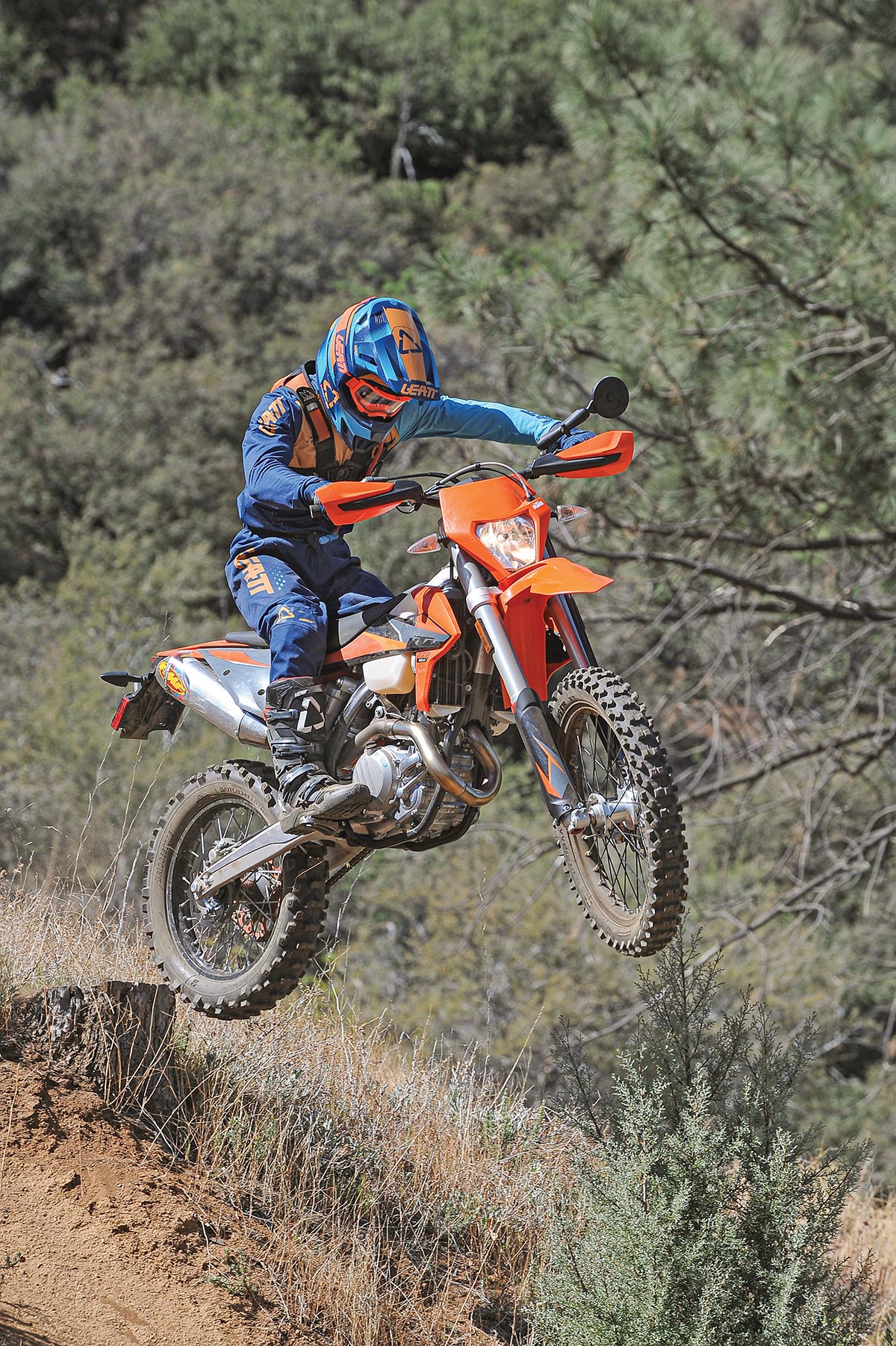 TARMAC TO TRAIL
At just under 245 pounds, the 500EXC-F is a featherweight in the dual-sport world. That’s right around the same weight as a YZ450F, which is one of the reasons that it’s so manageable in tight terrain. First off, though, the tires are nearly worthless off-road, and the machine does not come with rim locks. Proper rubber, thick tubes and rim locks will lather on a good 4 to 5 pounds. Second, it’s geared to the moon, and if any serious off-road terrain is in your future, we’d suggest shelving the 48-toother for a 50-tooth rear sprocket. That still feels tall to us. We tried dropping the front 14 to a 13, but that proved too much of a change. Ultimately, for serious off-road mated to very occasional street jaunts, we’re going to a 14-52 combo.

The power is subtle and so oddly quiet that it’s almost unnerving. With the standard gearing and tires, about the most serious we got was fire roading and playing on some Disneyland-like trails. Once we fit on some serious DOT rubber (both Bridgestone E50s and MotoZs were tested) and bolted on a 50-tooth sprocket, things improved dramatically. It runs very clean, has no big hits and cabooses nicely to very few flame-outs or stalls. Most of the thrust is down low, with a fairly strong midrange. As with any big four-stroke, we like to carry as tall a gear as possible, which relaxes the suspension and lets the bike track. But remain steadfast here, the 500 EXC runs on the lean side of things and will cough inadvertently when you try to lug it too much. The clutch pull and feel are seriously good. The throttle feels light with little vibration. It does leave you wanting. Long-time off-roaders will think about coaxing more thrust out of it, but the bottom line is that other than the soft growl out of the engine, the machine is very trail-worthy.

In the handling department, the ability to flick and manhandle a big 500 trail bike is hugely welcomed. The EXC-F is manageable and easy to maneuver. It danced quite nicely on the trail. Both suspension ends are very soft. The front end is a shade divey under braking, and anyone pushing the scale numbers past 180 pounds will need stiffer coils. In stock dress, it chews in trail hack, cringes at whoops and gets a little freaky at higher speeds when the terrain gets hostile. Still, suspension setup is one of those areas that is easily customizable, though not accomplished cheaply. 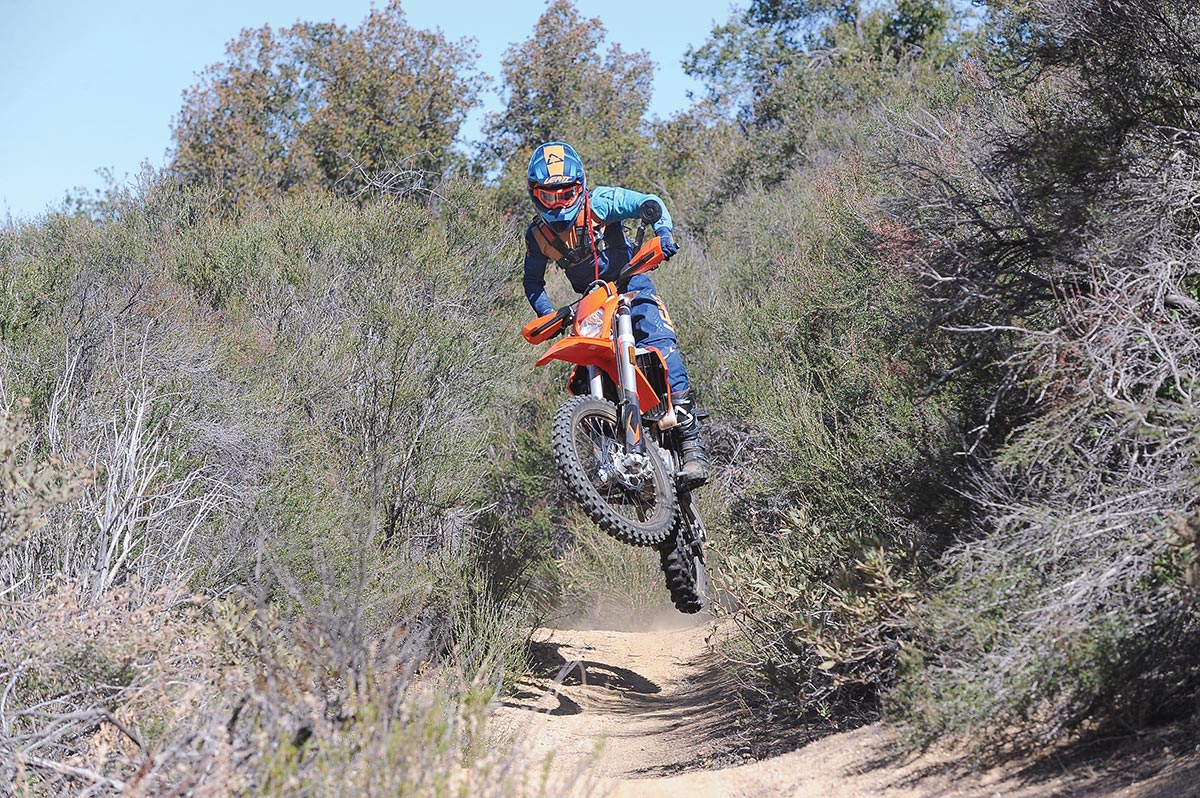 THIS AND THAT
The footpegs and X-ring chain are pluses. The minus is no skid plate! The mirrors are nice for street use but worthless when you go off-road. Plan on getting Doubletake foldable mirrors; they’re good for road and dirt.

Every year we snivel about the low-hanging license plate and how it gets sucked up into the rear wheel when under duress. Well, this year we went to the Nevada 200, rode just about 150 miles of gnarly Nevada desert and had no drama with it. Go figure. For the ride, we did change the muffler, using a stock Husky FE501 muffler that mirrors the standard unit except for the small end plate. It was seriously quiet and made for a nice power gain in the middle to top.

Nearly every rider we talked to wanted to know about getting more power. Legally, as a street machine, this is a no-go zone. Hardcore off-roaders have been known to remove the airbox reed valve, fit on a mappable ECU unit and change the muffler to one with better flow. This makes for a substantial power gain, but again changes the legal stature of the machine to a closed-course bike.

Gas mileage was incredible. We got over 30 miles to the gallon in hard off-road terrain, and in normal dual-sport trails and road we got 75 miles to a tank. The odometer worked well, though it is a shade small. It has quite a few good functions. We never lost a turn signal. The kickstand is excellent and tucked away. The bars are comfy and ergonomically adjustable, and the ODI grips are flat sweet.

AND…
This machine is going to require very little to make us salivate. We plan on getting some suspension work done. There are no cannisters or devices that we need to remove, and we will start a search for some legal power gains. We will fit on some slimmer handlebar switches, as the real estate is tight, and will definitely fit up a Trail Tech GPS unit for some of our upcoming dual-sport adventures. For the guy looking to ride out of his garage and explore, it doesn’t get any better. For the dude looking to decimate monster hill-climbs, this baby will search for a fun trail around them. It costs $11,599.