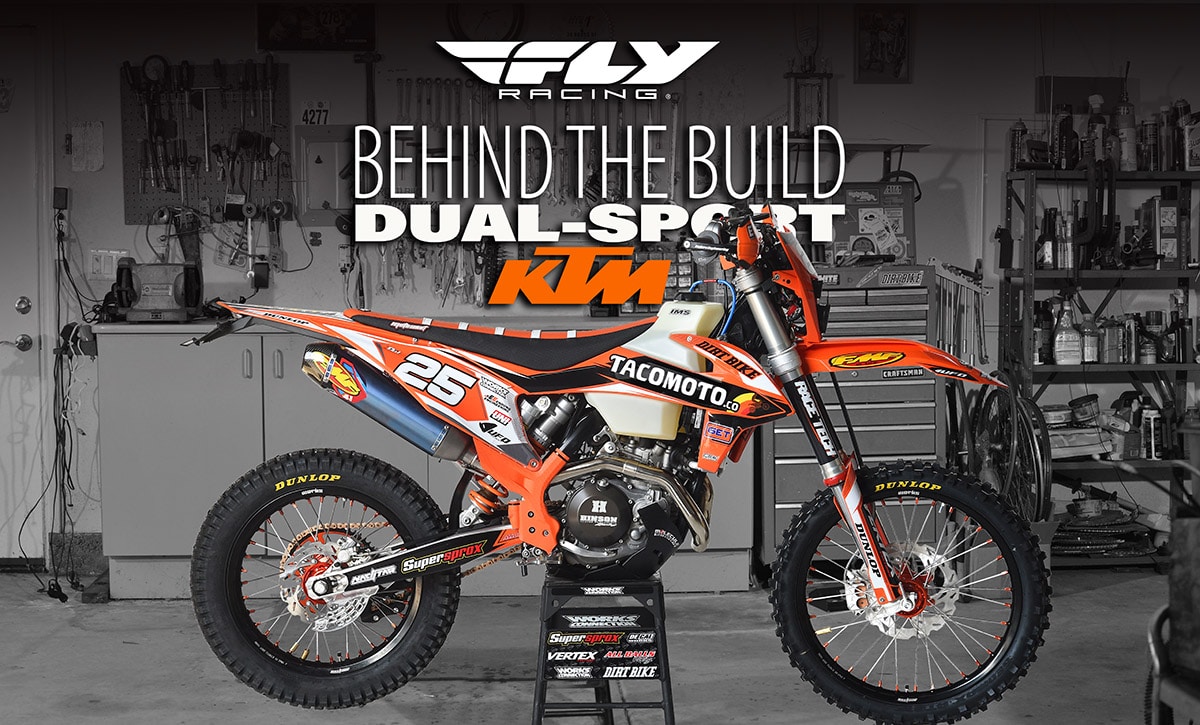 Jealousy is a fantastic motivator. My 2020 KTM 500EXC-F sat in the garage for a year without being ridden. It had a short history: it won our dual-sport shootout; it was purchased; it was ignored. I had plans to ride in Tecate, a Backcountry Discovery Route and perhaps even the Sonora Rally. We have no shortage of test bikes to ride for the DB staff, but there are rules. Dual-sport bikes cannot be permanently modified, and they can’t leave the country. If you want to do any of those things, you have to own your own bike. Thus, I bought our test bike through Malcolm Smith Motorsports and promptly parked it for almost a year, lacking the time to put all my grand schemes into action. 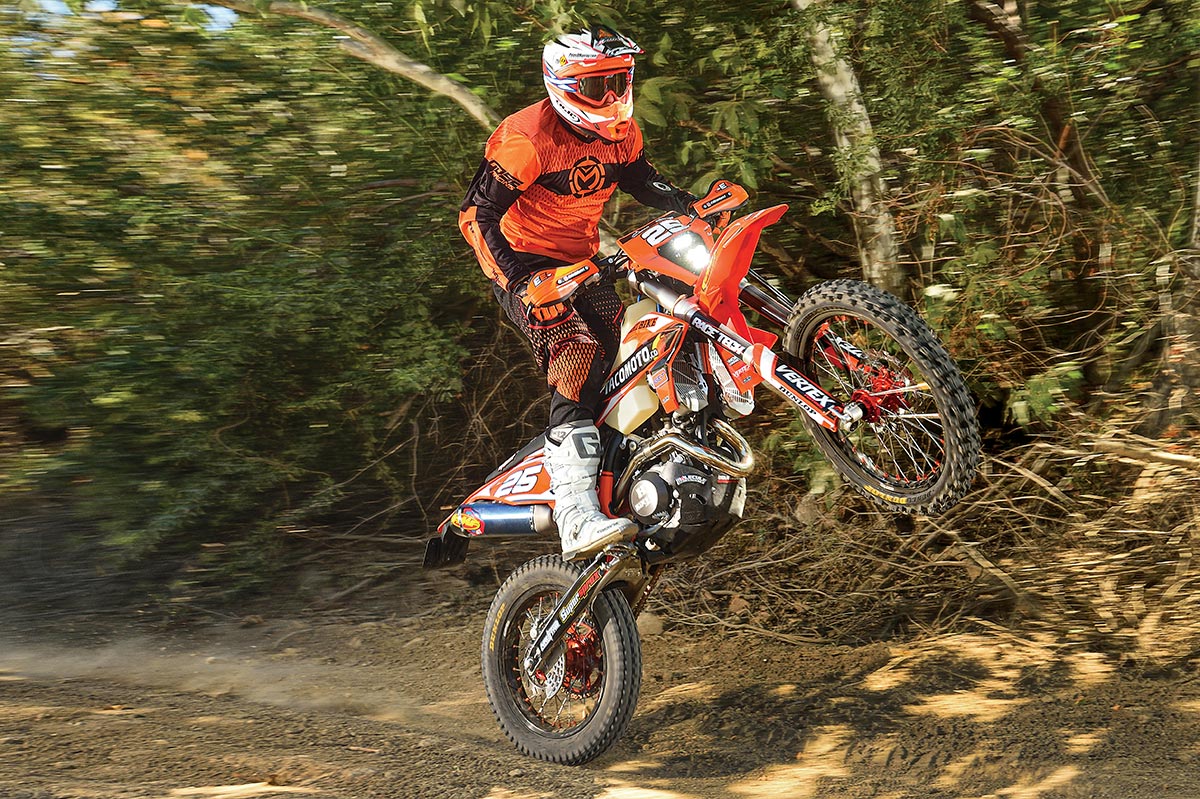 The KTM 500EXC-F is probably the greatest dual-sport bike of all time. Still, it can be a lot better.

Then jealousy happened. Jay Clark built a beautiful KTM 350EXC of his own for the cover of the May 2021 edition of Dirt Bike. It was lean, clean and ran like a race bike. My bike was stock aside from the dead battery. If you’re familiar with the KTM EXC line, you know that they are great dual-sport bikes. They’re quiet, light and simple. But, owning one is an ongoing voyage of discovery. The odd designs that exist just below the surface fall into two broad categories: confused genius and blatant nonsense. The genius part includes all the emissions, noise and DOT regulations that KTM dealt with to make the bike legit. The nonsense part is the mystery selection of controls that don’t fit, tires that don’t work, suspension that’s not right and so on. After Jay’s bike showed me that it doesn’t have to be that way, it was time to take my 500 to the next level. 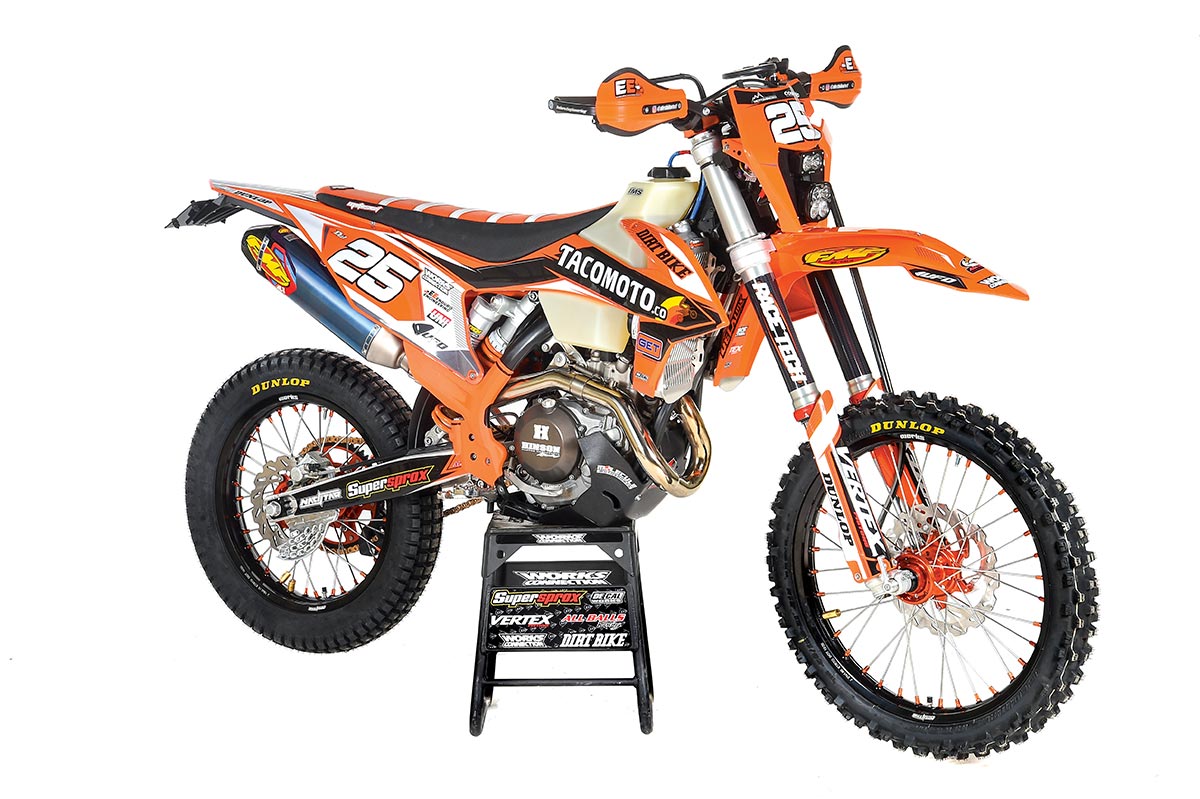 The guys at Tacomoto in Las Vegas did most of the thinking and building on this project. They know what they’re doing when it comes to dual-sport bikes.

THE RIGHT STUFF
One of the principal sources for information on Jay Clark’s 350 was Mike Spurgin at Tacomoto in Las Vegas, so that’s who I partnered with for my project. Mike is a hard-core dual-sport fanatic. Most of the shops that sell dual-sport parts are just moving Chinese bling. Mike isn’t one of those. He rides dual-sport bikes, learns how to make them better and then makes the parts to accomplish that. The majority of his work centers around the KTM 500. “I consider the stock KTM 500EXC the best single bike available today,” says Mike. “If you wanted just one bike that you could race and take trail riding, that’s it. You don’t have any worries about red stickers or green stickers; you just ride it.” But, even Mike admits that the KTM 500 isn’t at that level in stock form. “KTM did a great job of getting it past all the DOT requirements legitimately, but there’s a lot of performance left behind in that process. In other areas, it’s clear that KTM was just trying to save money.”

Mike went to town on the 500EXC, fixing all the sore points that he had already explored on his own KTM. These things included the fragile license plate bracket and blinkers; the preposterously oversized handlebar switches; the weak, ill-pointed headlight; and the clumsy fuel-tank connectors. One particularly clever design that Mike came up with was to convert the charcoal canister into a coolant overflow reservoir. Mike and his buddy Chris Vestal at MotoMinded have solutions for all these things before they start thinking about performance. MotoMinded has a number of things that do a remarkable job of cleaning up the front end. Between the Dash kit and the Supermount V2 kit, the rat’s nest of wiring behind the headlight is organized and the speedometer is relocated to a location that actually makes it useful. Motominded also has a Headlight Mask kit that works with Baja Designs’ Squadron LED lights to enable night riding—something that’s completely impractical with the stock headlight.

Some of the solutions that Tacomoto has don’t comply with official DOT specifications. They do, however, pass the practicality test. The blinkers aren’t in the traditional locations, but everyone knows exactly which way you’re going to turn. If a highway patrolman gives you a fix-it ticket for any of this stuff, more than likely it’s really about your bad behavior, not anything about the bike. 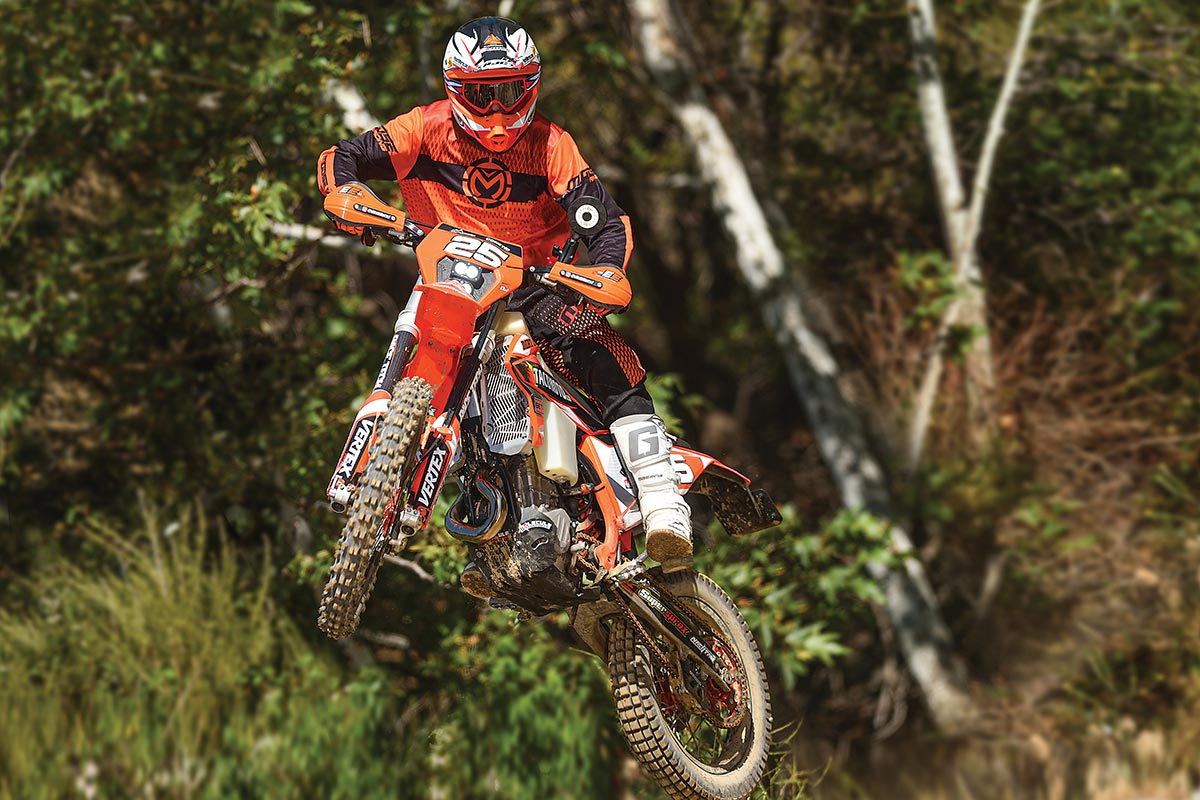 FAST VERSUS LEGAL
As far as performance goes, everyone should be aware that the bike is tuned to meet sound and emission standards and that it’s no longer legal if you tamper with that stuff. In stock form, though, the bike isn’t especially powerful; it produces around 39 horsepower on the dyno, which is similar to a KTM 125 motocross bike. I wanted more. That meant I had to make the bike into a closed-course competition vehicle, although I freely admit to riding it on the street. The way I look at it, the local authorities will have to arrest 10,000 belching Harley riders with open exhausts before they get to me. I hereby release Hi-Torque, KTM and Tacomoto from responsibility for my wrongdoing and will happily do any jail time on my own. I installed a GET ECU with a map that Mike developed for an FMF RCT 4.1 slip-on muffler and the stock head pipe, which was polished by the guys at MX Refurb. One of the great things about the GET unit is that it allows on-the-fly access to two different maps. I set one map to work with the FMF muffler for rides where noise isn’t a big issue. The other works with the stock silencer. That’s for riding around my neighborhood. GET has a smartphone app that lets you fine-tune the mapping, although the settings that Mike developed were perfect.

One of KTM’s genius designs is the use of a reed valve in the intake boot between the air filter and the throttle body. This damps intake noise and has the side benefit of squelching the occasional backfires that come with lean mapping. I removed the reed somewhat apprehensively. Even with the FMF exhaust, the EXC was quiet enough for my purposes, and with the new mapping, there were no issues with backfires. It turned out to be a good call, although the reed isn’t the horsepower roadblock that people think it is.

It goes without saying that I had to switch the tires. At the suggestion of Jay Clark, I gave the Dunlop 950 DOT trials tire a try in the rear. This is a fully legal tire on the road and is said to get excellent traction on hard-packed dirt and rocks, which is mostly what I ride. It isn’t very good in mud or sand, which I try to avoid. The wheels are from Nacstar, simply because I believe in having two sets of wheels for any dual-sport bike. The stock rims got more aggressive knobbies for my all-dirt adventures. When you install real off-road tires on the KTM, you have to install rim locks and balance the wheels. I balanced the wheels with Tacomoto’s wheel-weight kit using one rim lock in each tire.

There are a number of other products and companies involved here, all chosen based on Mike’s advice. The fuel tank is an IMS. The mirrors are from Doubletake. The skid plate is from a company called Molecule. Some of the switches are from SAR. Works Connection, TM Designs, Supersprox, Hinson, Rekluse, Motoseat, Tusk, ODI, Enduro Engineering and UFO were all represented somewhere. I used Race Tech to rework the suspension. The fork that KTM specs on the bike is a WP Xplor 48 with coil springs. Most people assume that this is a budget fork, but it’s actually quite sophisticated. It uses two springs, but the compression valve stack is on the left side and the rebound is on the right. It’s soft, which is forgivable, but the damping clickers are mostly ineffective. We have tried a number of different spring and valving combinations with this fork over the past few years, but the results have never been that satisfying. Race Tech reworks the fork to operate more like a conventional open-cartridge system with the two fork legs more or less identical; compression on top, rebound on the bottom. The springs were upped to 0.46 kg/mm. In the rear, the valving was beefed with RT’s Gold Valve design, and the spring upped to a 6.7 kg/mm.

BEYOND DUAL-SPORT
The final product is one of the sweetest off-road bikes in the world, and it just happens to have a license plate. I hesitate to say that it’s street-legal, but it is more legal than a regular dirt bike or most of the cruisers parked at Starbucks on a Sunday morning. It has none of the compromises that we generally expect with dual-sport bikes. It’s powerful. The mapping is clean, and parts don’t fall off on the trail. In terms of outright performance, it falls just short of making the peak power of a 450SX-F—for that you would need more compression and head modification. It is, however, much smoother and easier to ride. It’s a wonderful trail bike.

This isn’t over, though. Right now, the bike is ideal for rides in Mexico and suburban hit-and-run adventures. My next goal will be to convert it into a rally bike. That will require more range, navigation capability and, I’m certain, dozens of other things that I don’t yet know about. It will be another voyage of discovery. It should be fun.