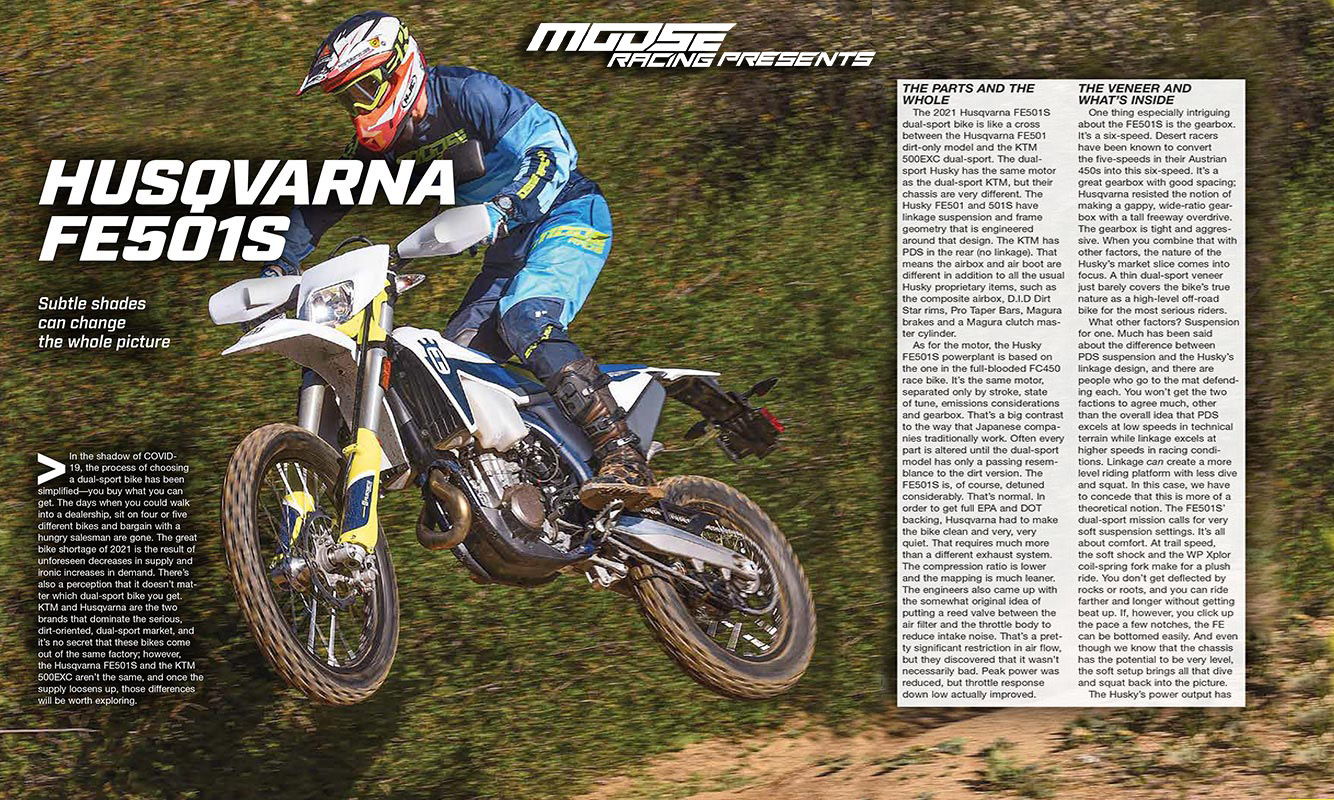 In the shadow of COVID-19, the process of choosing a dual-sport bike has been simplified—you buy what you can get. The days when you could walk into a dealership, sit on four or five different bikes and bargain with a hungry salesman are gone. The great bike shortage of 2021 is the result of unforeseen decreases in supply and ironic increases in demand. There’s also a perception that it doesn’t matter which dual-sport bike you get. KTM and Husqvarna are the two brands that dominate the serious, dirt-oriented, dual-sport market, and it’s no secret that these bikes come out of the same factory; however, the Husqvarna FE501S and the KTM 500EXC aren’t the same, and once the supply loosens up, those differences will be worth exploring.

THE PARTS AND THE WHOLE
The 2021 Husqvarna FE501S dual-sport bike is like a cross between the Husqvarna FE501 dirt-only model and the KTM 500EXC dual-sport. The dual-sport Husky has the same motor as the dual-sport KTM, but their chassis are very different. The Husky FE501 and 501S have linkage suspension and frame geometry that is engineered around that design. The KTM has PDS in the rear (no linkage). That means the airbox and air boot are different in addition to all the usual Husky proprietary items, such as the composite airbox, D.I.D Dirt Star rims, Pro Taper Bars, Magura brakes and a Magura clutch master cylinder.

As for the motor, the Husky FE501S powerplant is based on the one in the full-blooded FC450 race bike. It’s the same motor, separated only by stroke, state of tune, emissions considerations and gearbox. That’s a big contrast to the way that Japanese companies traditionally work. Often every part is altered until the dual-sport model has only a passing resemblance to the dirt version. The FE501S is, of course, detuned considerably. That’s normal. In order to get full EPA and DOT backing, Husqvarna had to make the bike clean and very, very quiet. That requires much more than a different exhaust system. The compression ratio is lower and the mapping is much leaner. The engineers also came up with the somewhat original idea of putting a reed valve between the air filter and the throttle body to reduce intake noise. That’s a pretty significant restriction in air flow, but they discovered that it wasn’t necessarily bad. Peak power was reduced, but throttle response down low actually improved.

One thing especially intriguing about the FE501S is the gearbox. It’s a six-speed. Desert racers have been known to convert the five-speeds in their Austrian 450s into this six-speed. It’s a great gearbox with good spacing; Husqvarna resisted the notion of making a gappy, wide-ratio gearbox with a tall freeway overdrive. The gearbox is tight and aggressive. When you combine that with other factors, the nature of the Husky’s market slice comes into focus. A thin dual-sport veneer just barely covers the bike’s true nature as a high-level off-road bike for the most serious riders.

What other factors? Suspension for one. Much has been said about the difference between PDS suspension and the Husky’s linkage design, and there are people who go to the mat defending each. You won’t get the two factions to agree much, other than the overall idea that PDS excels at low speeds in technical terrain while linkage excels at higher speeds in racing conditions. Linkage can create a more level riding platform with less dive and squat. In this case, we have to concede that this is more of a theoretical notion. The FE501S’ dual-sport mission calls for very soft suspension settings. It’s all about comfort. At trail speed, the soft shock and the WP Xplor coil-spring fork make for a plush ride. You don’t get deflected by rocks or roots, and you can ride farther and longer without getting beat up. If, however, you click up the pace a few notches, the FE can be bottomed easily. And even though we know that the chassis has the potential to be very level, the soft setup brings all that dive and squat back into the picture.

The Husky’s power output has the same trail bike nature. It’s perfectly adequate—to a point. It has smooth, consistent throttle response with great torque and virtually none of the pops and glitches normally associated with super-lean, EPA-legal bikes. That’s amazing in its own right. The bike is ultra-quiet, which is a state that has conditioned us to expect nasty flameouts and random flat spots. The FE doesn’t do any of that. If you really try, you can certainly stall it, but that’s the nature of any big-bore four-stroke and has nothing to do with the lean mapping. At trail-riding speeds, the power output is great. When you rev it a little higher, though, it goes a little flat. On top, it’s a pretty pale version of the FC450. You gotta pay for that quiet exhaust note somewhere.

THE VENEER AND WHAT’S INSIDE

Next on the you-gotta-expect-that list is the tire selection. The FE501S comes with Continental TKC 80 tires. You probably know that these tires have an excellent reputation in the adventure world for good off-road performance. It’s not the same story here. The Contis might work magic with a 400-pounder, but they are far too street-oriented for a bike like the FE. They offer so little traction in the dirt that Husqvarna doesn’t even bother installing rim locks. They’re included in the toolkit for when you install full knobbies, which you should do immediately. 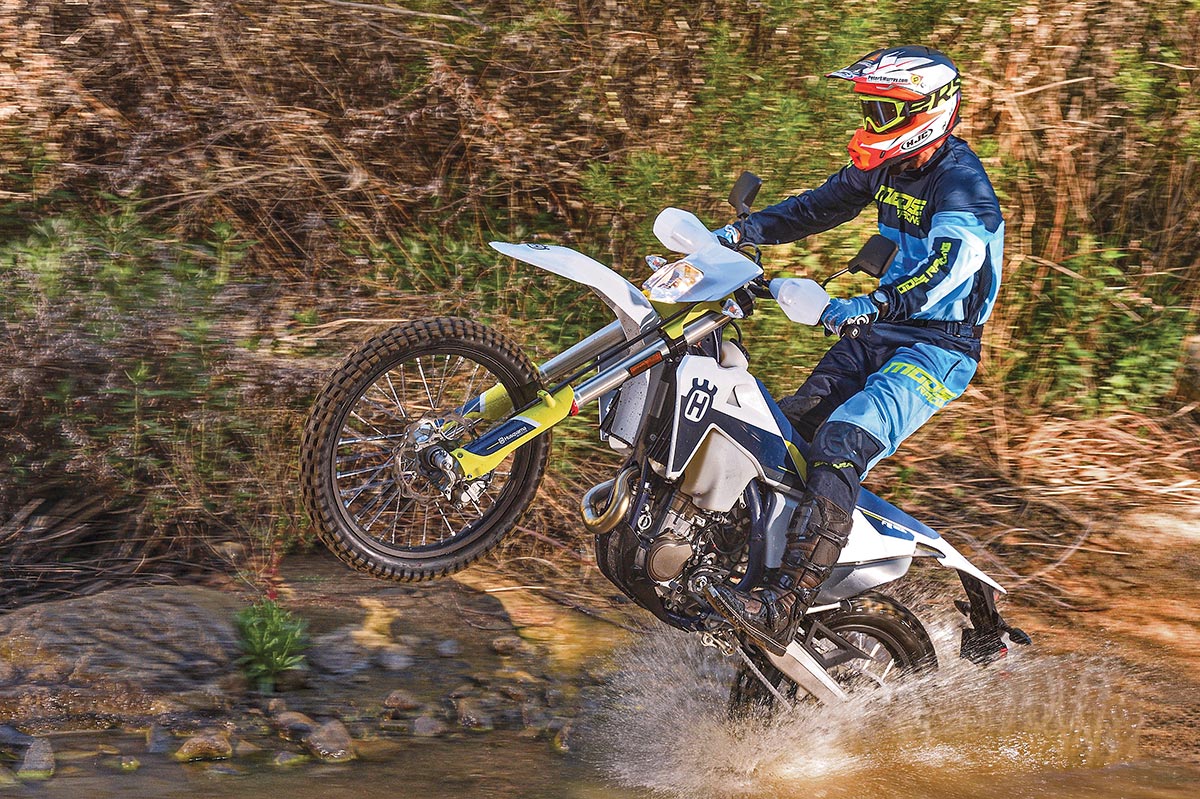 SO WHY IS IT SO GOOD?
You probably already know that this bike has a reputation for being one of the most sought-after dual-sport bikes on the market. It’s priced accordingly: the MSRP is $11,699. But, considering its tire selection, soft suspension setup and plugged-up peak power, you’re justified in wondering why. Despite all that, the FE501S is still a for-real street-legal dirt bike. It weighs 248 pounds without fuel (but with mirrors), which isn’t that far away from a full-race 450 motocross bike. When you start off with that, everything else is forgivable and fixable. The bike can be tossed into a turn like a motocrosser. You can work narrow trails and steep downhills like it’s a 300 two-stroke. All the limitations that spell disaster for most dual-sport bikes are easily defeated. Get better tires and stiffen the suspension and you can take this bike to any off-road event or race in the country with a reasonable expectation of success. You might have to invest in some protective measures, though. The license plate bracket that hangs down behind the rear wheel is just waiting to get sucked into the tire. The blinkers are pretty wobbly, and the mirrors offer no flex or give; they’re just big metal sticks. All easy fixes that keep the aftermarket healthy and happy.

More extensive modifications are problematic. The usual disclaimer is necessary here: the bike is no longer compliant with the EPA if you modify anything that affects sound or emissions. Technically, you can’t even put a larger fuel tank on it because that’s part of the emissions system. If you go down that road, fuel mapping is the most important hurdle to clear. If you just make exhaust or engine modifications, they won’t be effective. Removing the reed valve alone isn’t especially productive, either. If you really want to make it into more of a race bike, it’s all or nothing.

Our solution is to leave the motor alone. Fix the tires and the other stuff, but don’t take away the FE501S’ strongest asset—its legitimacy. It allows you to ride past the local sheriff on the way to your favorite trailhead and spend a day riding without worries. If you want a race bike, you want noise or you want worries, look somewhere else.