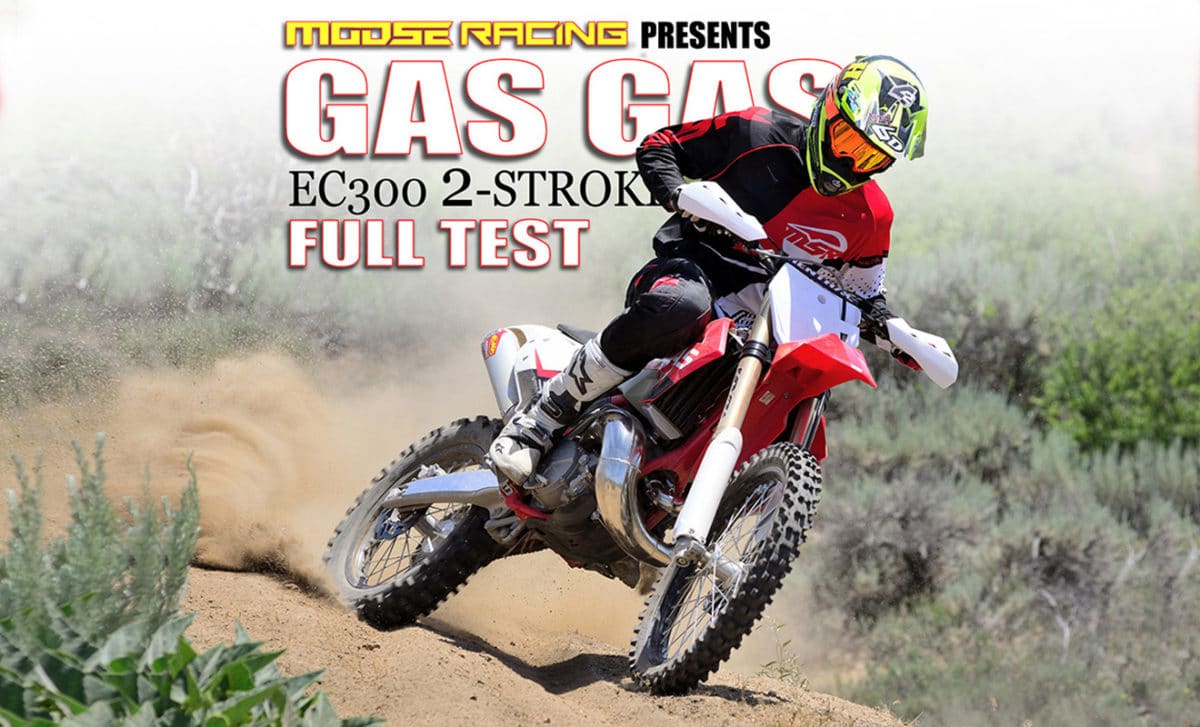 It’s time to take Gas Gas seriously. It’s no longer the cute little company with the funny name. Gas Gas is now poised to become a legitimate alternative to the big Japanese and Austrian off-road motorcycle-makers. After a prolonged near-death experience, the Spanish firm now has the capital and the know-how to play a role in the new age of the two-stroke. The 2018 EC300 is proof that it’s happening already.

THE BACKSTORY
If you’re familiar with Gas Gas motorcycles, that means one of two things: you’re a trials guy or you’re a devoted fan of hard-core trail riding, probably from east of the Mississippi, possibly a follower of the National Enduro series. The company has been a big fish in the small pond of trials riding for 30 years and has been a cult favorite in the east since the company expanded into two-stroke off-road bikes in the early ’90s. The first off-road bikes were developed by Paul Edmondson, and he used them to win the 125cc World Enduro championship in 1994 and the 250 title in 1996. Since then, the Gas Gas EC250 and EC300 have developed a reputation for being more and more specialized. They weren’t motocrossers, they weren’t desert bikes, and they weren’t casual trail bikes. Gas Gas did hard-core enduro, events like Erzberg, Roof and Africa and the U.S. National Enduro series. It was a great specialty but at the wrong time. Through that entire period the market shifted to four-strokes, and Gas Gas’ attempt in that arena was a flop. All that led to mounting financial trouble, repeated bailouts and eventual bankruptcy.
Everything changed when a company called Torrot purchased the closed factory in Girona, Spain, two years ago. Torrot needed additional manufacturing capacity to produce its electric scooters and had the vision to realize that a two-stroke renaissance was afoot. If Gas Gas were given a second chance, it could not only take part but be a major player. The 2018 EC300 is the result of that vision.

OLD SCHOOL, NEW THINK
Torrot inherited an existing two-stroke off-road bike that was very good at one thing and one thing only—hard enduro. It was too heavy and old-fashioned to compete with four-strokes or more modern two-strokes in other venues. In the course of its rebirth, most (but not all) of the existing bike was redesigned. It started with the frame. Back in 1995 steel perimeter frames were all the rage, as witnessed by the Kawasaki KX line of the day. Gas Gas went with the trend, but since then, the shortcomings of that design have made themselves clear. Weight and range (fuel-tank capacity) are right at the top of the list. Today’s backbone frame might be a throwback to earlier times, but KTM has proven that the layout is still hard to beat. The new fuel tank is much slimmer and still holds 2.6 gallons, and the whole machine is much more compact.
Likewise, there’s no reinventing of the wheel when it comes to suspension. The new Gas Gas has a KYB AOS (cartridge) fork. In the rear, there’s a KYB shock with linkage connecting to a new swingarm. The motor is familiar to those who know their Gas Gas’, but since that isn’t a very large sample group, it might as well be new. It’s an electric-start motor with a case-reed inlet, a Moto Tassinari reed and a ball-ramp power valve. The electric starter is mounted on the left, just as on KTM two-strokes prior to the 2017 model year, and it gets to keep its kick-start lever. The starter is driven by a lead-acid battery. The new parts for 2018 are the crank, cylinder, piston, head and more. It still has a 38mm PWK Keihin carburetor, and that gives rise to more questions. Is this bike a place-keeper awaiting fuel injection? To be blunt, yes. Of course it is. You don’t have to be an insider to know that all two-stroke-makers are working on their own EFI systems behind closed doors. What we don’t know is when that will happen. Right now, Gas Gas says this bike meets Euro 4 emission standards for Europe, and that’s what matters. U.S. standards for EPA-approved off-road bikes are still too strict, even for the new KTM and Husky TPI bikes.
There will be two versions of the Gas Gas 300 available in the U.S. The EC is the one we have here, with the headlight, taillight and digital speedometer. The XC version will have a numberplate in front instead of the headlight. Additionally, the XC will have an FMF exhaust pipe. Both bikes will have an FMF Powercore silencer. Odd story: the U.S. government actually prevents either bike from having a spark arrestor. When EPA officials see a spark arrestor, according to the Gas Gas importer, they automatically assume it’s an off-road bike and insist that it conform to emission standards. By not having a spark arrestor, it fits the profile of a closed-course competition bike and is free of that requirement.

FULL SPECTRUM
We’ll only compare this bike to the previous Gas Gas EC300 long enough to say this: there’s no comparison. This isn’t to say that the old bike was without merit, but it could only sing one song. If it wasn’t a tight, technical, slow-speed ride, the bike wasn’t happy. The new version is much more versatile. You can ride it on the same extreme trails that the previous bike was known for, and then you can take it into wide-open spaces, shift into higher gears and give away nothing.
It all starts with the motor. Company press releases say that the new cylinder and head result in a 20-percent increase in peak power, and we have no reason to doubt it. The Gas Gas is competitive with other 300cc off-road two-strokes. It’s still not the fastest one on record—that would have to be the current KTM 300XC—but the EC300 still has the easy-going nature that made the old bike so good in tight stuff. The power delivery is smooth and sweet down low. If you push the bike forward with one foot, you can drop it into first gear without using the clutch. It won’t stall. Then you can open the throttle and take it straight to the top without a bog or hesitation. Try that with a four-stroke.
Another big improvement is the vibration level. The old motor was a shaker, but the new one is no different from a current Yamaha YZ250, presumably because of the new crank. It’s interesting to put this in historical perspective. Back in 1996, Gas Gas was the only two-stroke with a counterbalancer, and it was very, very smooth. As the years went by, there was so much emphasis on weight loss that the balancer went away. We missed it at first. Now, it seems unnecessary.
The weight loss this year is another major accomplishment. Truthfully, the bike had been inexplicably heavy in recent years (over 250 pounds without fuel!). The Spanish engineers worked wonders to shed weight, mostly in the frame. Now it weighs 233 on the majestic Dirt Bike super-scale. The KTM, Husky and Yamaha 250X are still around 15 pounds lighter each, but that’s a manageable difference. The Gas Gas feels very slim, compact and maneuverable in tight stuff. Most riders say it’s so compact that it actually feels a little cramped, but that could probably be addressed with a handlebar change.

TALES OF SPEED
We’re not surprised that the bike works well on slow, twisty trails. It always did. What sets the new one apart is that it can go fast too. That came with the increase in horsepower and the decrease in weight. If you were to stiffen the suspension, you could take this bike to a motocross course or a desert race with good results. It’s perfectly stable. It stops well, and the motor feels reasonably crisp. Compared to a Yamaha YZ250 motor, the Gas Gas is kind of slow-revving and tops out early, but it accelerates just as hard. Down low, the smooth power delivery isn’t exactly what a cut-and-thrust moto kid would appreciate, but the Magura hydraulic clutch has a light pull and an outstanding feel, so you can bring the revs up in a hurry.
As we mentioned, you’ll probably have to stiffen the suspension if you’re serious about racing on fast courses. The KYB fork and shock are well balanced and have excellent action for anything that happens in first or second gear. The bike deals with rocks, ruts and roots perfectly. Once you shift into third, though, the laws of physics take over. The fork dives under hard braking, and both ends can bottom just on the face of a jump, never mind the landing. All that makes perfect sense—the bike is still aimed at hard enduro riding, regardless of its newfound versatility, and the suspension is designed with the traditional Gas Gas rider in mind. Likewise, the tire selection was made with extreme riding in mind; the tires are actually named the Metzeler Six Days Extremes. They were tacky and soft but had a little sidewall roll at high speeds.
In the course of riding the bike for a couple of weeks, we discovered that it’s very easy to live with. The bike always starts quickly. Even though the old-fashioned lead-acid battery is heavy, it’s very powerful and spins the motor with enthusiasm that a lithium battery can’t match. The carb has a handlebar-mounted trigger choke, which means you don’t have to put your index finger in harm’s way as you idle away from the truck. We never really felt like we got the jetting perfect. Even though the bike ran crisply, it could make a knocking sound on deceleration that sounded like detonation. There were never any bad results, so it might be a benign engine noise. We had no maintenance issues; the side-access airbox was easy to deal with, and the bike never missed a beat.
When a bike is this new, it will take months to learn its personality. For right now, we’re overwhelmed with the overall performance and quality. With this as an opening move, Gas Gas is already proving itself to be legit as a company. And, it will only get stronger.

A KAWASAKI KX450F FOR GP RACING: THE WRAP