A KAWASAKI KX450F FOR GP RACING: THE WRAP 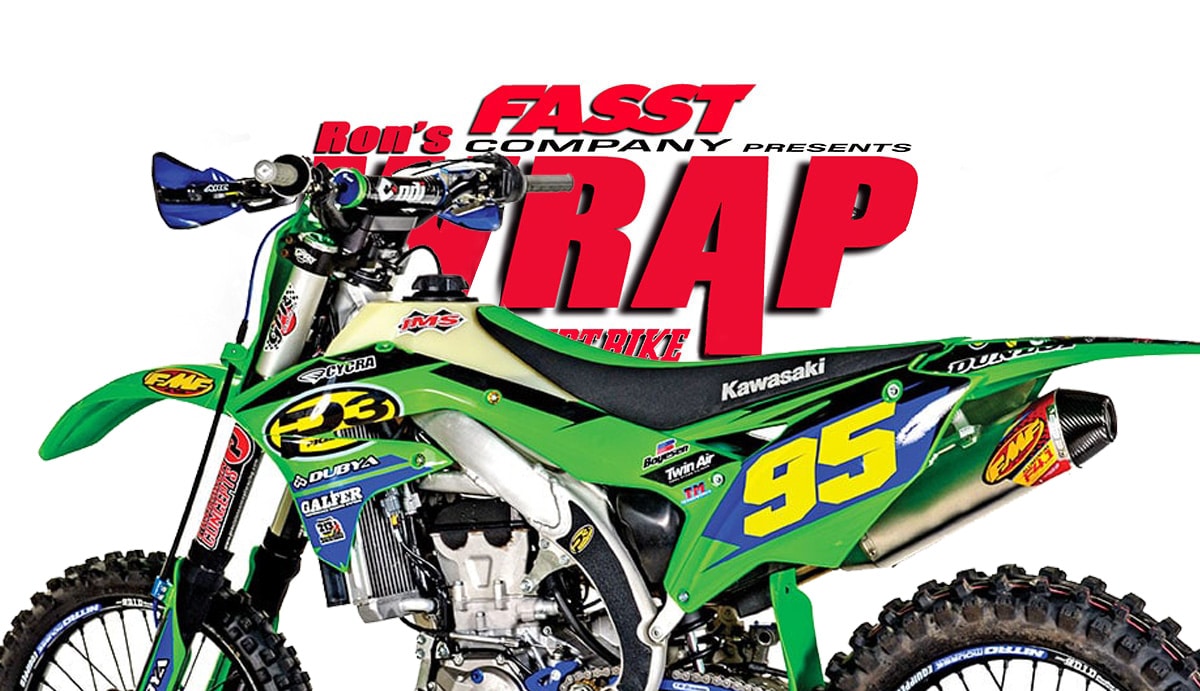 Kawasaki drastically changed its 450cc motocross machine for 2019, making it lighter, faster and giving it electric start. The changes were great but Managing Editor Mark Tilley was one of a large group or riders who loved the old KX450F, particularly as an off-road racer. In off-road, it’s all about a balance between performance and comfort over terrain that tests every aspect of a machine’s ability to humble brutal chunks of scenery. For the Big 6 GP season, Mark chose the KX and his personal bike. Here’s how it all came together.

The 2018 KX450F came with a Showa Triple Air fork setup. There are two issues with it. First is the compliance factor. They’re not very plush and lack the ability to absorb the little hack that a spring fork smiles at. Second is that racers are nervous about losing air in the middle of nowhere, so many times they convert the Triple Air to a spring fork.

We decided to stick with the Showa Triple Airs for this build and worked with Bob Bell at Precision Concepts to get them performing smoothly for off-road racing. Precision Concepts is the West Coast racing effort for factory Kawasaki, so it’s safe to say they are familiar with the components. Up front Precision re-valved the fork to retain the good bottoming resistance while giving it a plusher feel from the initial hit and more progression to the overall appetite of the fork.

Out back things were a little more painful. The newer-generation Kawasaki has a lot more active feel in the rear compared to the previous generation, so it was all about getting the rear end to settle down and track with less monkey motion. This was done with a setting similar that Precision Concepts uses on the factory team’s race machines. They re-valve the shock, leave the spring rate standard and fit on a longer Ride Engineering Performance Link. The combo lets the rear end ride lower into the meat of the stroke, which improves traction, makes the ride suppler and dramatically reduces the unplanted feel when you’re charging through nasty terrain.

Another key bolt-on item for the speeds associated with West Coast off-road racing is the need of a steering stabilizer. We installed an under-the-handlebar-mount GPR Version 4 Pro kit that includes a top triple clamp, oversized bar mounts and a bolt-on frame-mounted pin. We also mounted ODI Podium handlebars with Controlled Flex Technology (CFT) and their soft lock-on grips that adds shock absorption for rider comfort.

Flats are always an issue when racing off-road, and because this build is all about finding function and comfort, we decided to have Dubya USA refurbish a set of stock wheels. They baked on a magnesium-colored Cerakote to the hubs, used stainless steel black spokes and spline-drive nipples laced up to black D.I.D DirtStar rims. In the rear we went with an 18-inch rim, used a NitroMousse insert and a 120/90/18 Dunlop AT81. We felt that the larger carcass size of the 18-inch rear tire would help with shock absorption, and matched to a NitroMousse insert, the combo would target flat-free traction. Up front we also used a NitroMousse foam insert and a Dunlop AT81 up front, opting for the larger 90/90/21 size, which is better in ruts and adds a little cushion to the ride. Galfer rotors and steel-braided lines were upgrades to the braking department.

On the power side of things, the 2018 KX450F has an easy-to-use spread of adrenaline, which is crucial for an off-road-based machine. We freshened up the engine with a new OEM top-end, including a cam chain, and inspected the head for any signs of wear. Internally, the only major change was the addition of a Radius CX clutch system from Rekluse. The new Radius CX system combines Rekluse’s TorqDrive and automatic EXP systems into one.

With performance modifications, the key to off-road racing is functionality. If you don’t make it to the finish line, you can’t win. We installed a Boyesen SuperCooler that has a larger impeller and a proprietary water-pump cover design to flow coolant at a faster rate than the OEM unit.

Another item we added for keeping the bike running cool was Cycra’s vented front fender and Powerflow kit. They are designed to channel cool air directly over the radiators. The last performance modification was the addition of a complete FMF 4.1 exhaust system. We chose the stainless steel and aluminum system because it stands up to off-road abuse and neglect better than titanium. This system also comes equipped with a removable U.S. Forest Service-approved screen-type spark arrestor, which is critical for areas requiring a legal system, and gives a nice enhancement to the mid and upper power on the machine.

THE BOTTOM LINE When the smoke bomb cleared, our KX450F off-road build was something that even Kawasaki engineers could appreciate. Do we think they are going to use this test bike like a bible to build an off-road version of their MX model? Well, if they raced the machine once, it would probably be on the first plane back to Japan for further evaluation. The overall feel of the bike morphed, but not so dramatically that it would offend a satisfied owner.

Precision Concepts has the bike tracking straight in a variety of conditions, and the busy rear-end feel is almost completely gone. The power is still smooth, but there is a gain that adds to the appeal of the machine. Rekluse’s CX clutch is more appreciated late in the race when fatigue sets in or the terrain gets tight and nasty, and not having to worry about stalling out is huge, especially on a machine that lacks electric start.

The NitroMousse setup is great for flat prevention, and the sensation is closer to that of a tube than any other insert we have run before. We think the 18-inch rear-tire choice aided in traction and added some cushion to the bike. The Galfer rotors were the same size as stock, so we didn’t feel a huge increase in braking power, but we did notice improved consistency, even when the brakes got hot under heavy use. The occasional squealing we experienced with the stock units was eliminated. Overall, the changes we made to the KX450F targeted the machine’s ability to handle a more versatile world that challenges both the handling and power characteristics of the bike. Mark has had a good run on this bike and currently leads the Big 6 series in two classes: +40 Heavyweight Expert and +30 Heavyweight Expert. He will miss the next race at Ridgecrest, and after that, he will likely debut his 2019 Kawasaki KX450. He hopes it’s as good.

Rockstar Energy Husqvarna Factory Racing is raising the bar in helping one of their star amateur racers realize his dreams both on and off the track by providing a scholarship. Jalek Swoll is proudly graduating On
Track School with the rest of the class of 2018 this Friday, August 3rd on the big stage at Loretta Lynn’s in the Grand Pavilion at the Rocky Mountain ATV/MX AMA Amateur National Motocross Championship in
Hurricane Mills, Tennessee. Bobby Hewitt, Team manager for the Rockstar Energy Husqvarna Factory
Race Team. “We are pleased to have helped Jalek reach his goal of graduating high school. Hard work on and off the track are important life lessons and have no doubt contributed to Jalek’s success on and off the
track.”
Andrea Leib, Director of On Track School. “I’m honored to see support such as this for our dedicated athletes. Often times, it takes a village. Thank you Bobby, your team support means the world to us. Congrats to
you Jalek!”

I’m on vacation this week , but I’ll be back with a full-length Wrap next week. That’s all for now.