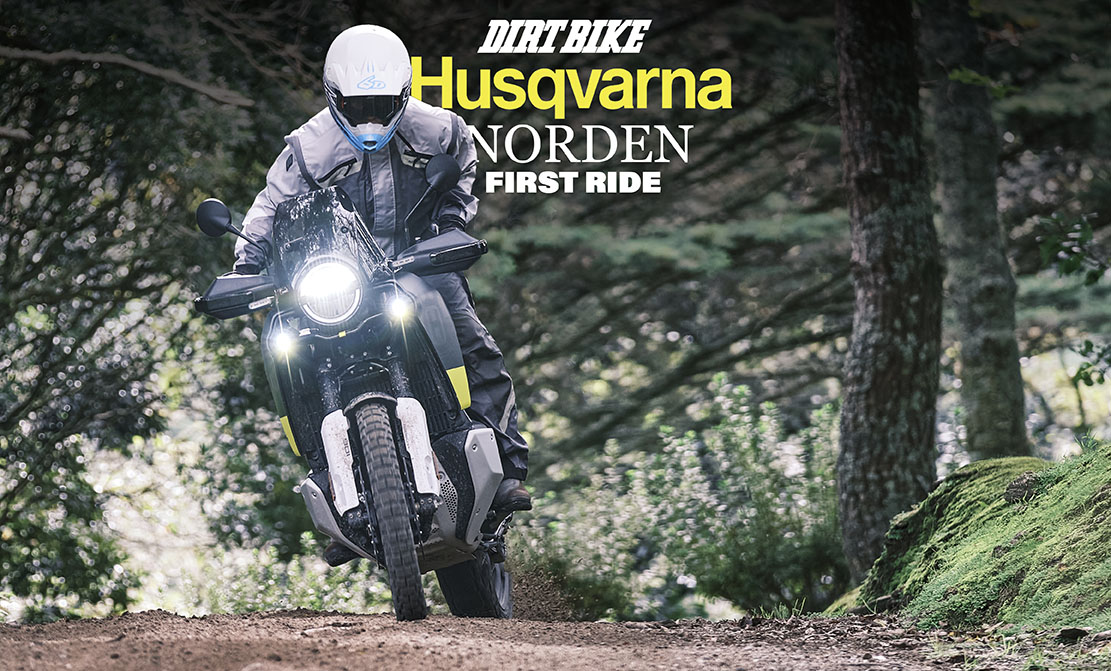 At the 2019 EICMA Motorcycle show in Milan Italy, Husqvarna revealed a concept bike called the Norden. At the time, it was just an idea, by no means a serious prototype. The whole notion of a Husqvarna adventure bike was just thrown in front of the public to gauge reaction. The public loved it. Feedback was so overwhelmingly favorable that the project was given a green light and a high priority.

Now the bike has arrived. Even though the Norden project came together quickly, it certainly wasn’t rushed. Husqvarna had a head start because the 889cc motor and trellis frame were taken straight from the KTM 890 Adventure. Almost everything else is different and distinctly Husqvarna. In the big picture, the Norden is the fourth version of the bike offered by the greater Husky/KTM group. The KTM 890 Adventure R Rally is seen as the group’s most hard-core off-road adventure bike, with high-dollar WP suspension and an Akrapovic exhaust system. It carries a price upwards of $20,000. The KTM 890 Adventure R has less-exotic Xplor suspension and less bling for $14,199, while the 890 Adventure standard edition has shorter travel and cast wheels for  $13,099. The $13,999 Norden doesn’t really compete directly with any of those. It’s more dirt-oriented than the standard 890, but aimed more at long distance travel than any of the others.

In case you don’t know your 890s, the motor is a DOHC parallel twin with a 435-degree firing order. The throttle is electronic; no cable. The output is rated at 105 horsepower. The key, however, is how Husqvarna allows you to manage all that power. A “slip control”  function has 10 levels of intervention. You can also alter lean-angle-based traction control, throttle response and antilock braking. For quick access, you can choose one of the pre-cooked recipes: Road, Rain, Off-road or, if you have it, the optional Explore mode, which lets you make your own combination. All this is accessible on the fly through a handlebar switch and a TFT display.

KTM has all that stuff as well. What really sets the Husqvarna apart is the bodywork and suspension. The fuel cell was redesigned and holds some of its 5-gallon capacity down around the motor. The fairing is more substantial, the seat is wider and the bike is designed more with comfort in mind. Husqvarna equipped this bike with WP Apex suspension, which is what comes on the more street-oriented KTM 890 Adventure, but gave it more travel. The set height still isn’t as high as the 890 Adventure R. It’s apparent that many riders needed a seat height that split the difference between the standard version and the R; the Husky is just that.

We got to ride the bike for two days on the island of Sao Miguel, in the Azores of Portugal. It was a surreal setting like something out of Lord Of The Rings; lush, green and very wet. Whether or not Husky planned it that way, it was a perfect test of the bike’s electronic adjustability. Being able to moderate the bike’s power output was essential. It was raining and the cobblestone roads were often covered with green moss. Traction was far better in the dirt than on the street. 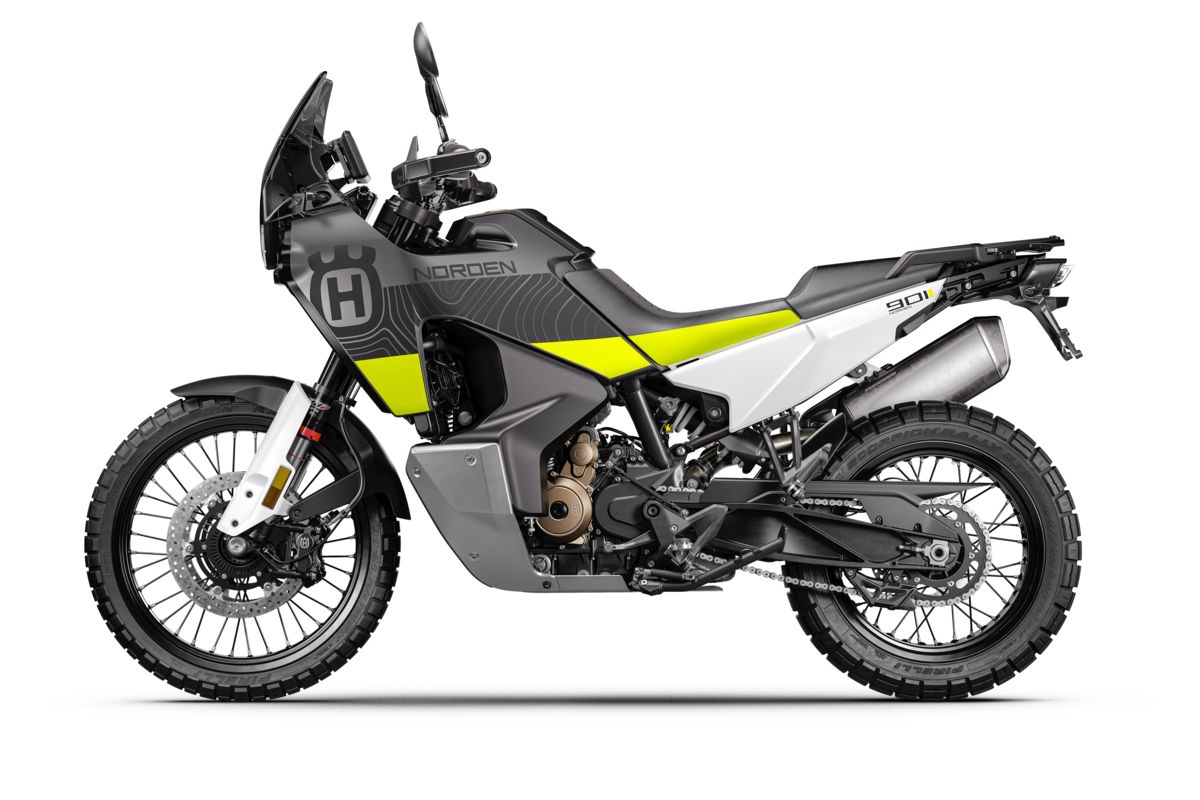 At first, it seemed like a sign of cowardice to put the bike in “Rain” mode where the power was muted. After sliding around, it was welcome. Likewise, having anything but full power in the dirt seemed an unmanly thing to do. Traction control often is so jerky and unpredictable that it offers no real benefit. Not with the Norden, though. When you have the bike in “Explore” mode, you can quickly tweak the slip setting on the fly. In one of the higher settings, say number Eight, you feel somewhat invincible. If you’re good at reading the traction ahead, you can adjust it for the situation. A setting of Zero is almost never a good idea, but needs to be experienced just to confirm that you do, indeed, have 105 horsepower available. Likewise, anti lock braking is a good thing when it deals with the front brake. The off-road setting disables ABS in the rear and lessens it in the front. You learn to love that. 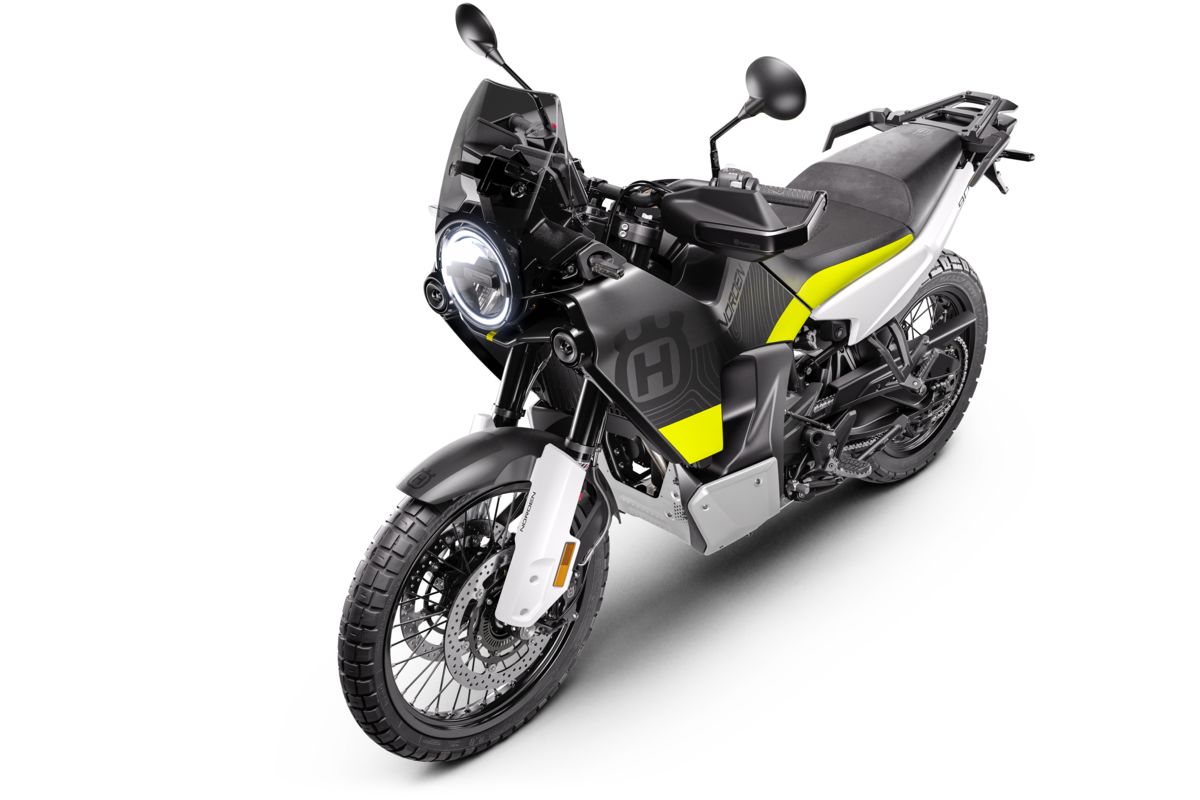 The rain also provided the opportunity to hide behind the little windscreen for extended periods of time. It’s no Gold Wing, but the protection is much more substantial than that of the KTM. The handguards are also decent and the adjustable seat is wonderful. The Norden is one of the most comfortable adventure bikes available.

If you’re a hard-core off-road guy, then there’s still no reason to pick the Norden over the KTM 890 Adventure R or the Rally. Those are clearly the bikes most likely to finish a Hare & Hound. Realistically, though, not that many riders want that level of off-road competence. The Norden is more of a mainstream bike for exploring the occasional Backroads Discovery Route, and then sticking to the pavement for long stretches. We will have one in the U.S. for more testing soon, and the full test will appear in the February, 2022 print edition of Dirt Bike.