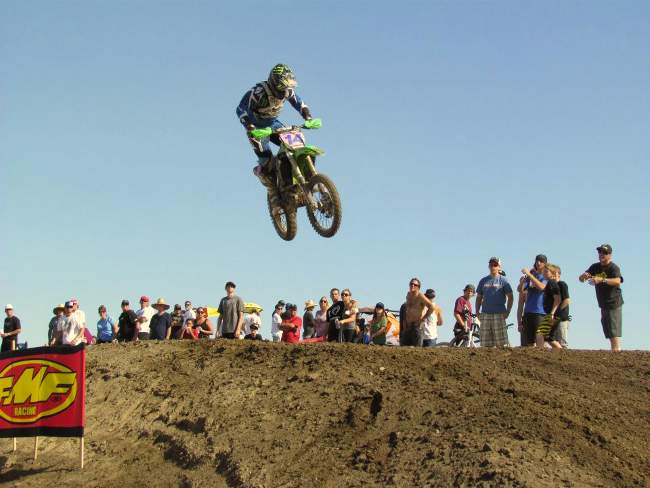 This is one of those places that I’ve never done really great at, but I felt like I’ve been riding pretty well lately so I was hoping to change that up. I actually had a pretty good start, and after leaving the mx track I was in 6th. There were a few sections in the off-road that were really dusty and you just had to back off. In a sandwash I saw all the guys on the side waving their hands to slow down, and since I couldn’t see much I made sure I did. Then I saw that Kurt must have had a big crash and was waiting for the dust to clear to get his bike. This moved me into 5th place. I was a little tight early on, but was still holding down a solid 5th for the first half of the race. After I pitted, I realized that Ryan Abbatoye and Robby were putting on a late race charge. I had Justin about 25-seconds in front of me, and since those guys were pushing me it was helping me close up the gap on Justin. Luckily, by the finish, I was able to hold on to 5th and finish 12-seconds behind Justin. I was happy with my results, but was extremely dehydrated and hurting more then I would’ve liked to have been.

Today’s track was a lot better then it was yesterday. I grabbed another great start and was in 5th leaving the mx section. Once again I was a little tight, but was ok with that since I had a good pace going. Robby was right behind me the first few laps, and we were putting a good gap on the rest of the guys behind us. Unfortunately I lost my front end coming into a corner and went down. It wasn’t a big deal, but after I picked up the bike I couldn’t get it started and by the time I did had lost a lot of time and was really tired. This was about halfway into the race and I started to try and push it. However, I was feeling yesterday’s race more then I should’ve. That was the worse I’ve been dehydrated in a long time and my body didn’t recover as fast as I would’ve liked. I ended up losing some more spots before the checkered came out and just finished behind 8th and 9th. Not to happy about the way today went!

I was happy with my Saturday’s finish, but really disappointed on Sunday’s. I was hurting, because of dehydration, and just wasn’t able to put in the ride I should’ve on Sunday. My speed is pretty good and felt this was a race I had a good opportunity to finish top 5!

One of the top guys that wasn’t able to race was my teammate Taylor Robert. He had a medical emergency and had to go to the hospital Saturday morning. He’s back in AZ now, but is still in the hospital as of today (Tuesday). Things seem to be looking good, but I felt really bad for him since he still had a chance at the championship. I think he’s going to be the guy to beat in 2012!

I was super happy for Gary Sutherlin who got his first WORCS podium on Saturday. He’s been riding really well! It was good to see Sherri Cruse back racing after they had their little girl (Emerie). Love hanging out with them!

My mechanic (Jonny) wasn’t able to make it to this race (or the next one). I had a longtime friend, and mechanic that I won a lot of championships with John Braasch Jr. fill in during Saturday’s race. Then Taylor’s mechanic Jeff Decker filled in on Sunday. Both did an awesome job and I really appreciated their help!

My next race is this weekend in Lucerne, CA for the final H&H! Let’s see if I can end the season with a win!!!