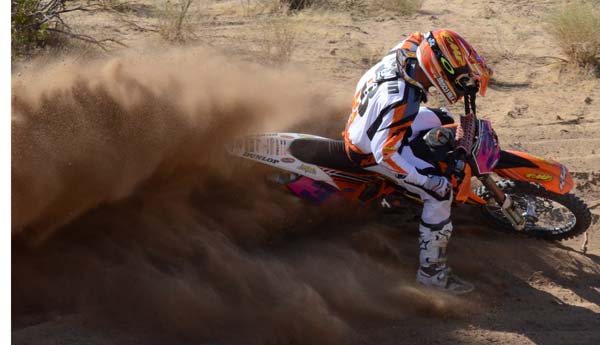 Mike Brown moved into second in the series with his dominant performance at
Racetown.

One of the rarest occurrences in sports is perfection. In baseball, it’s the perfect game when no player ever gets on base, in motorcycling, it’s the perfect race. On October 15-16 for WORCS round 9 at Race town in Adelanto, Mike Brown had not one, but two perfect races. In race #1 Brown got the holeshot, led every lap, was never passed, not even for a single corner, then he took the checkered flag still perfectly clean and without a speck of dust or roost on him. It was a perfect, race. Then on October 16th for race #2 of WORCS round 9, Brown did it all again for the perfect weekend.

The only man to keep Brown in sight was second place finisher Bobby Garrison. Garrison went 2-2 over the weekend for second overall and a stellar return to the podium to announce his full recovery from the injuries he suffered earlier this season.

Privateer (and we hear not for long) Bobby Garrison went 2-2 for the weekend, showing that he is back from a series of nagging injuries.

Third overall with a 4-4 score went to Justin Soule. Soule had good and bad luck races, getting good starts and then crashing hard, but he kept picking himself up and charging forward. The hard work and the beating paid off with another podium for one of the most talented rider in the series.

Team Green’s Justin Soule’ keeps poking his head into the mix, finishing a not so satisfying 4-4, but proving that he had the speed to hang with the leaders.

Gary Sutherlin took fourth overall with a 3-6 score for round 9; it was Sutherlin’s best finish ever after scoring his first podium in Race #1.

Sore and beat up from a brutal crash in race #1, Kurt Caselli put in another heroic ride to finish third in Sunday’s race. His combined score resulted in an 8 -3 finish for fifth overall.

Kurt raced for over an hour with no clutch lever, and a small piece of grip on the clutch side after a high-speed get-off. Consider, there was a difficult endurocross section to navigate every lap as well as 5th gear tapped out sand whoops. He finished 8th this way.

Taylor Robert never made it back to the track, hospitalized on Saturday; Taylor travelled home to see his own doctors on Sunday and hopes to return for the WORCS final next month in Arizona.

Kurty’s cockpit is missing some hardware.

With one round left in the WORCS Series Caselli holds a substantial lead with 387/3 wins. The only rider with a mathematical chance of beating Kurt is FMF/KTM teammate Mike Brown with 346/2 wins. Garrison has moved up to third in the points chase with 334/1 win ahead of Robert with 326/2 wins.