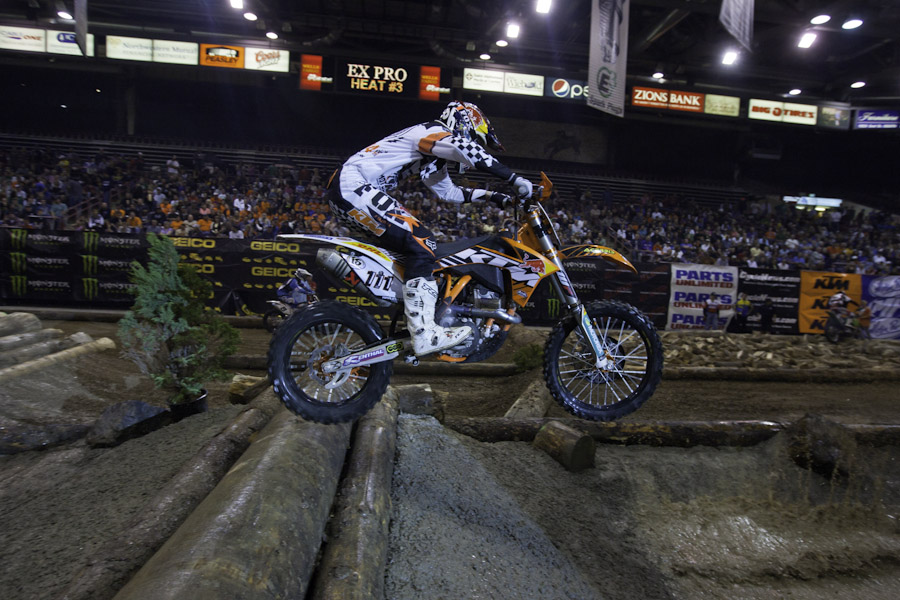 Taddy continued his dominance of the series with his sixth straight win at the Boise round.

The three podium finishers also set the three fastest laps during the hot laps to get the first picks in their respective heat races. Damon Bradshaw, the former top Motocrosser who is now 39 years old competed in his first ever EnduroCross and surprised everybody by setting the eighth fastest time during the hot laps. He unfortunately could not find his way to qualify for the main event. Monster Kawasaki’s Justin Soule managed to beat Aaron during the first heat race while Brown and Blazusiak each won their heat races.

KTM’s Blazusiak made it easy on himself by jumping to the front coming out of the first turn and then launched completely over the first pool on the first lap to pull a small gap. Brown, the only rider that still has a mathematical chance of winning the championship knew he had to finish at least third to keep the title hopes alive and came out second ahead of Soule. Then Soule made a great pass on Brown in the long, difficult rock section to take the position but Brown got aggressive to take the position back and actually kept Blazusiak in sight for several laps. Soule and Beta’s Cody Webb were battling over third early in the race but collided in the pond section when Webb doubled over the first pond while Soule singled it. That allowed GEICO Honda’s Aaron to take over third, where he would finish.

KTM’s Mike Brown is the only rider with a mathematical chance of stealing the crown from Taddy. A strong second place finish was impressive.

After the collision, Soule made a heroic comeback to finish fourth without a visor or goggles. Gary Sutherlin, the privateer Kawasaki rider finished fifth ahead of a hoard of riders that were all battling for the position early. RPM KTM’s Bobby Prochnau finished sixth ahead of Keith Sweeten, Kyle Redmond, Cody Webb, Max Gerston and Eric Rhoten.

Geoff Arron and his Christini powered Geico Honda CRF250 ended up third, the benefactor of a Webb/Soule’ incident.

The Championship is still alive as the series heads to the Las Vegas for a double main event format. Blazusiak has a perfect 180 points followed by Brown with 127, Aaron with 118, Webb with 103 and Soule tied with 103. For the E3 Spark Plugs Junior Championship within a Championship for riders 21 and under, Monster Kawasaki’s Taylor Robert has 41 points followed by Keith Sweeten with 34 and Ryan Sandoval with 30.

In addition to the Expert class, EnduroCross events include Open Amateur, Vet 35+ and TrialsCross classes. The top two finishers in each class also earn a spot in the Vegas Grand Championship Finals for each respective class. The Vet class was won by Shane Cuthbertson ahead of Adam Booth and Josh Adams. The Amateur class was won by Max Gerston over Eric Rhoten and Derick Mahoney. The TrialsCross class was won by Bryan Roper and he was followed home by Mike Damm and Shad Petersen. Louise Forsley made history by being the first female to ever qualify for an EnduroCross Amateur main event and finished tenth.

Justin Soule’ was impressive in his come from the back crash with Webb, tallying fourth overall. Check out his visor and lack of goggs.