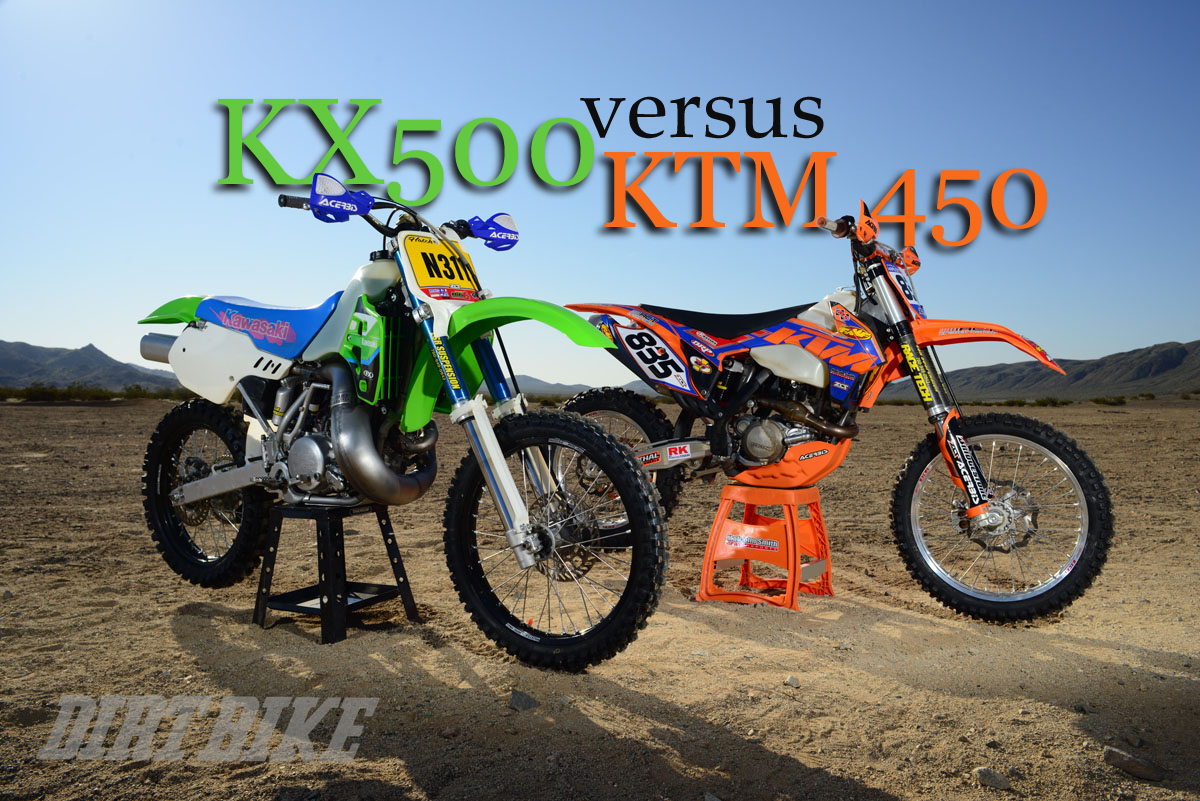 “If I was in second place at the bomb, I considered that a bad start,” says Paul Krause. “The KX500 would start and come off the line so hard, I would be going 50 mph before the kick-starter hit the footpeg.”

That’s no exaggeration. There was an era in desert racing when there was only one motorcycle that mattered. From around 1992 to 2002, the Kawasaki KX500 reigned supreme. Even now, there’s a large group who claim the Kawie could still win in the hands of a top rider. What was it about the bike that generated such dedication? Modern bikes have surpassed the old 500cc two-stroke in most measurable ways, including horsepower and light weight. But, in the opinion of virtually everyone old enough to have raced the KX, there’s one thing that the Kawasaki did better than any bike before or since—it was the king of the bomb run.

In case you live in a region that has never hosted a bomb run, a brief description is in order. There’s nothing like it. You stand frozen in a painful pose: one leg up, one leg down, generating a silent stare so intense it would surely cause the flag man to burst into flame if it lasted a moment longer. The flag drops and the world around you erupts in noise, speed, wind and violence. You suffer through 20 or 30 close calls with rocks, brush and other riders in a period of seconds. Your arms and legs scream for relief, but you don’t dare let off, even for a second. If you do, you’ll be encased in a dark envelope of dust that won’t lift for miles and miles. Even a good start for most riders eventually ends up in a dust cocoon when the bomb run tapers into a single trail. That’s desert racing, and you learn to deal with it.

There’s an elite group of riders who have mastered the bomb run. They can cover the distance to the singletrack minutes ahead of normal riders. It’s all about preparation: they prepare their start area, they practice the run many times to find the optimal line, they know their bikes inside out, and they know exactly how to make them start and leave as quickly as possible. For years, an essential part of the formula was to ride a Kawasaki KX500. When the KX was discontinued and four-strokes took over, the very essence of desert racing changed. Today, there’s a moment of silence between the drop of the flag and the sound of the first motor coming to life. That didn’t happen before.

We understand that there’s a certain tendency to mourn the loss of any bygone era. The KX500 is gone. Two-strokes have diminished relevance. Each generation has its own priorities, but there’s no shortage of those who miss the good old days. Was the KX500 really that good, or is it just another myth generated by stubborn, old romantics?

Paul Krause is a somewhat ageless product of several eras. He was a member of Kawasaki Team Green in the glory days of the KX. He was also one of the first desert riders on a four-stroke and still races every single weekend. By estimate, Paul has lined up for over 1000 bomb runs so far. That gives him perspective to comment on the KX’s greatness or lack thereof. “The KX was actually a terrible, outdated motorcycle, even when it was winning,” he says. “It didn’t change for 15 years. It vibrated, dripped gas and was really hard to ride on its best day. But, it could do a bomb run like no other bike, and that would put you in clean air. It was a huge advantage. A modern four-stroke just can’t do that.”

We decided to test Paul’s contention. What would happen if we found a KX500 that was restored to prime condition and compared it to a modern bike? Paul hadn’t ridden a Kawasaki KX500 since 1998, so what would happen if he lined up against himself—KX Paul against KTM Paul? Today’s Paul rides a KTM 450XCF, which is the winningest bike in the National Hare & Hound series. It has ESR suspension, a Scott’s damper and an FMF pipe, but is otherwise stock. We found a perfect Kawasaki KX500 for the contest. It belonged to Fred Hatch and was set up just like the Team Green KXs back in the day. In fact, it was restored and built by John Braasch, who was the man who built the Baja 1000-winning Kawasakis of the ’90s. Even back then, in order to get the KX into race condition, it had to have the frame reinforced, the crank balanced and be carefully assembled. The Hatch bike got all that. It also had ESR suspension, a Scott’s damper and an FMF pipe. It was as close as possible to a KX in its prime.

Our contest would be simple. Both bikes would meet at dawn in Lucerne Valley. Paul would make timed bomb runs on each bike from a dead-engine start. It would be the champ versus the legend.

DUEL IN THE DESERT

Several factors allowed the Kawasaki to start so quickly. The most important was the fact that it could be started in gear with the throttle wide open. If the combustion chamber had a fresh charge and the piston was positioned properly, it would fire as soon as the kick-start lever started to move. With the throttle open, the engine would produce its max horsepower within milliseconds of the first movement of the crank. It was also very powerful and very stable, all of which were factors in a clean bomb run.

The KTM XC-F has its own virtues. It is an electric-start-only motorcycle. In terms of peak power, it’s actually very similar to the KX. Both bikes make almost 60 horsepower, but the KTM has a much broader powerband and more linear delivery. It makes power sooner in the rpm range and revs much higher. The two bikes are also almost identical in weight, right around 240 pounds without fuel, but the biggest advantage for the KTM is in the chassis department. It was developed in modern times. When this Kawasaki was first sold, it was using designs and technology that were already over 10 years old.

“When I first switched to a four-stroke, I really struggled with starts,” says Paul. “It was a 1998 Yamaha YZ400. It would never start quite the same way, but the throttle had to be closed. I learned to listen for the engine to fire, which is really difficult when there’s all the noise from a start all around you. I would hold my head really low behind the bars. As soon as it fired, I would have to wait a fraction of a second before I could give it gas or it would die. Now, the KTM always starts, and it can take throttle quickly, but I still have to start it with the throttle closed initially, and I still have to listen carefully for it to fire.” 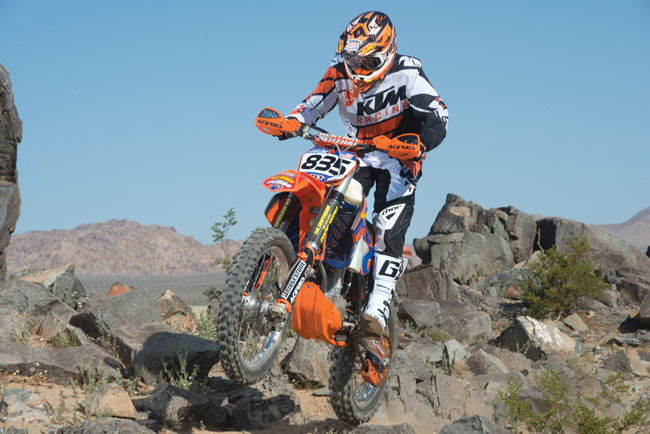 After letting Paul practice with both bikes, we set up our test. There would be several measurements, including time to the flagman (about 200 feet) and time to the trailhead (approximately one mile). We used GPS technology as well as a good old-fashioned stopwatch for the timing. First, the Kawasaki. Paul warmed up the motor and then killed the bike at full throttle with the kill button. Next he put the motor in second gear, pulled in the clutch and rolled the bike back and forth to free up the clutch plates. The kick-starter was pushed through to top dead center, and then Paul assumed the position: one leg up and the other on top of a mound of dirt. When the flag dropped, it was impressive. From the position of a flagman, only 200 feet away, the sight of the bike leaping forward actually preceded the sound of the bike starting. And it didn’t just lunge forward; it leaped. The bike might have actually left the ground slightly. Paul made a clean run all the way to the “bomb.” In case you were wondering, they no longer use a pile of burning tires to make the end of the bomb run. These days, it’s just a big flag. Paul repeated the procedure several times. The bike never failed to start on the first kick.

With the KTM, the procedure was slightly different. After warm-up, the bike was killed at idle. Paul put the bike in second, pulled in the clutch, and then rolled back and forth to free the plates, just as he had earlier. Then Paul jabbed the starter button in short hits to position the piston at top dead center. Once or twice it unintentionally fired up during this process. The stance for the four-stroke was very different: both feet down, head very low, eyes forward. When the flag dropped, there was only a slight delay before the bike jumped forward.

In every case, the KX won the race to the flagman. It wasn’t even close. In a contest that only lasted about three seconds, the KX consistently covered the ground in about half the time. There were a few miscues by the 450 that made the gap even bigger. Honestly, we didn’t need a stopwatch. It was that obvious.

The race to the bomb, on the other hand, was less decisive. Paul’s best time on the KX was 1 minute, 33 seconds. For the first run on the KTM, that record stood, if barely. On repeated runs, the tide started to shift. He beat the KX, and on the next two runs, he cut three seconds off the record. It was clear that Paul was learning the start, and the more times he repeated the run, the more times he would cut off. And there was another factor. “I can just go faster on the 450,” Paul admitted. “The Kawasaki is just violent, and man, does it shake. It’s fast, but there’s only so fast I want to go. On the KTM, I feel like I can gas it harder without getting in trouble.

“I never thought I would say this, but the KX is also a very strange bike. The seating position is like I’m riding my living-room recliner. The suspension itself isn’t bad, but I don’t feel like I can dodge around the brush very easily. It seems to be happiest just going through the middle of everything. I’m not sure, but maybe that’s how I rode it back then.”

Our test didn’t include the biggest factor of all: other riders. It’s possible that the KX’s initial jump could result in much more of a gap by beating other bikes to a good line. We thought about performing other contests too. We could have timed the bikes through whoop sections and across whole valleys, but that didn’t seem necessary. We came out to offer the KX500 one last chance for glory. It met its younger opponent head to head and came away with at least one victory. We’re sure that some riders will continue to insist that the KX is still the king of the desert. That’s okay. We love the bike too. And for us, it’s enough to know that it’s still the king of the quick start.

For part two, where we compare a KX500 to a KX450F on a hillclimb challenge, click here. 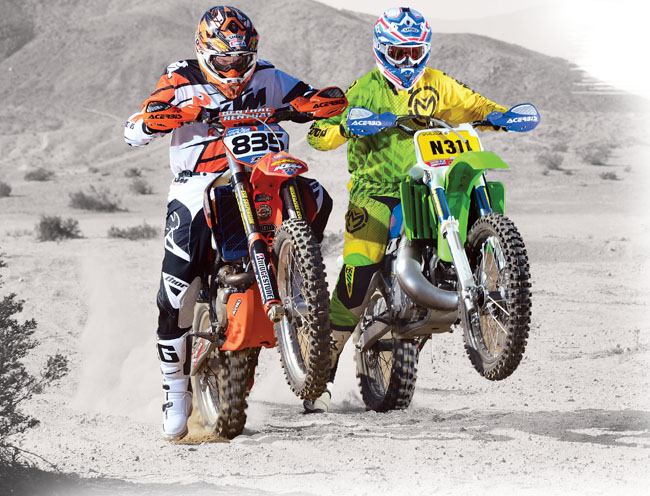