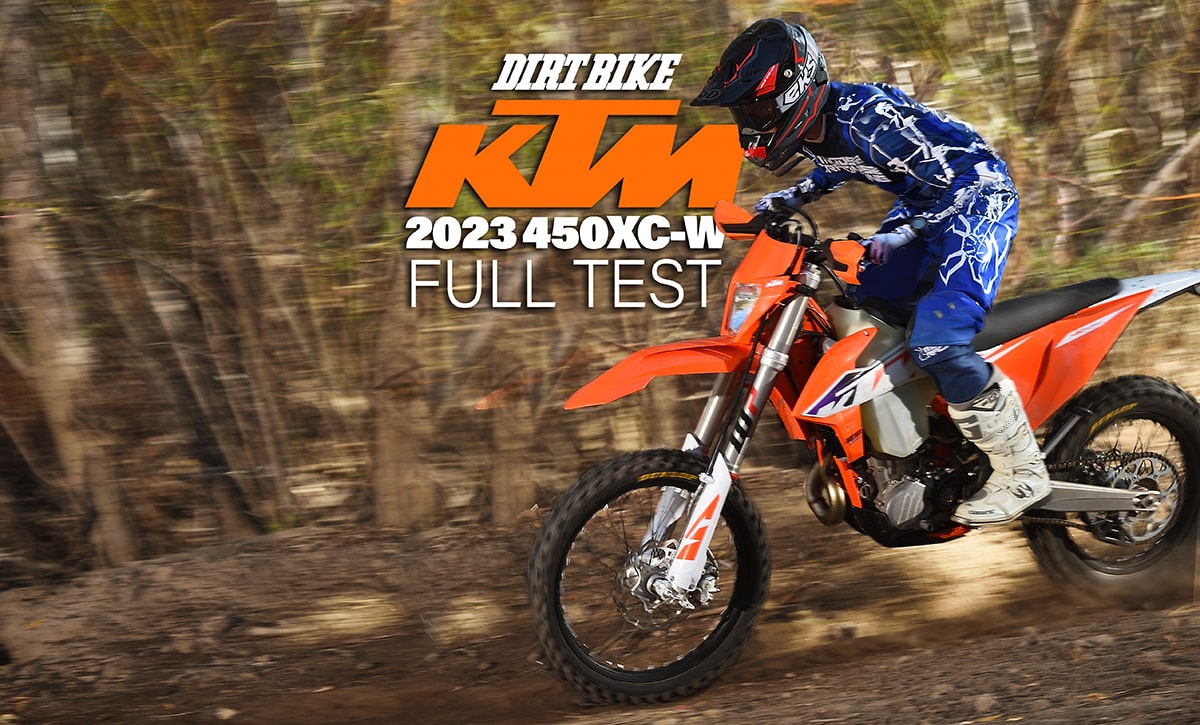 If you take a quick look at the 2023 KTM 450XCF-W, you might think it isn’t anything new or special. You would be wrong. The 450XCF-W is a new bike for 2023 and marks a big change in philosophy for KTM. The reason it looks so familiar is because last year there was a 500XCF-W, which looked almost the same. That bike was a stuffed-up attempt to comply with the EPA’s definition of an off-road vehicle. It was only a half-step away from being a dual-sport bike in terms of noise and emissions. The only real reason most riders were interested in it was because it was eligible for a California green sticker. This year KTM basically gave up on trying to jump through California’s hoops, and so the 450 is imported as a closed-course competition vehicle, just like any motocross bike. In truth, though, this bike is nothing like a motocross bike—or anything else in the KTM line for that matter.

FROM THE PARTS SHELF

The 450XCF-W was more or less assembled with parts that KTM already had developed for other bikes and for European models. To start off, it uses no-link PDS rear-suspension system. The front suspension is the WP Xplor coil-spring fork, and the overall suspension setup is much softer than that of a motocross bike.  None of the XC-W models got the new frame configuration that comes on all the 2023 KTM race bikes. Aside from being designed without suspension linkage, the XCF-W frame is more compliant. It has a radiator fan, a headlight and a taillight. More important, it has a smooth, friendly power delivery and a 6-speed gearbox. The gearbox itself is exactly the same as that of the 500EXC, which is a favorite among desert racers. It isn’t uncommon for riders to install the EXC gearbox into the 450XC for racing. Now they don’t have to.

We can’t really see inside the ECU and wouldn’t understand that’s in there anyway, but the engine mapping is what really sets this bike apart. It’s been freed from any EPA or CARB requirements, which were unique to the U.S. On top of that, the reed valve in the air intake boot is gone. That’s especially good news for dual-sport guys who want to modify their bikes. They now have a handy part number for the boot without the reed. The evaporative system is also gone. As a side note, KTM was the one company that did an excellent job with that system. Others had obtrusive canisters hanging off the side of the bike. KTM’s was invisible.

The 450XCF-W runs better than any four-stroke in the KTM fleet. That doesn’t mean it’s faster; it just means that the motor runs flawlessly from bottom to top. Every other bike has some kind of hiccup somewhere. The dual-sport bikes are stuffed up and pop on decel. The SX motocrossers can flame out at low rpm. This bike just runs sweetly and smoothly, like a motor should run when it’s mapped or jetted to perfection. You can drag it down to fairly low rpm and roll it on. It won’t cough or backfire, and it finds traction where a motocross bike would just spin. That’s a huge relief compared to most 450 off-road bikes that always have you performing a delicate dance between the throttle and the clutch.

In terms of absolute power, the XCF-W lands right in the middle between the dual-sport bike and the motocross bike. Some of the power is lost in the exhaust system, which is much quieter than any competition bike. It isn’t, however, as stuffed up as a dual-sport or last year’s 500XC-W.

Admittedly, anyone who plans on racing a 450XCF-W will want more power. When you get it in wide-open spaces, competition 450s have a clear-cut advantage. An aftermarket exhaust will get you about halfway there. The rest is in mapping and the cam. The compression ratio and valve sizes are the same as the 2022 450XC-F. The one thing that cross-country racers will love is the 6-speed gearbox. The ratios are just about right so that every gear is useful in some situation or another.

There are riders who love PDS suspension and others who don’t. It’s almost a litmus test that says what kind of rider you are. PDS guys like tight, technical riding with logs to climb over and rocks to traverse. Linkage guys like going fast. The 450XCF-W is typical of a PDS bike; that is to say, it’s set up for tight trails and slow speeds. One of the key advantages to doing away with linkage is the increase in ground clearance, so the XCF-W never finds itself wobbling on top of a log that you didn’t quite clear. Plus, the overall setup is soft, so it deals with rocks and roots exceptionally well. That goes for both ends. The Xplor fork might, in fact, be too soft even for hard-core trail riders. Critics of the PDS system often say that it has a stinkbug kind of feel. The soft fork amplifies that feel. It does, however, make for a very cushy ride. If you want to distill the XCF-W to its simplest terms, it’s all about speed. When you’re in terrain that keeps the speeds below 30 to 40 mph, the KTM is in its element. When you’re riding hard and fast, the bike can be pitchy and divey with the stock setup.

Keep in mind that the world is full of suspension experts who specialize in KTMs with PDS suspension. It’s not like this is a new invention. Most of them will be able to make the XCF-W work well for high-speed work, but if that’s your gig, the 450XC-F might be more your kind of bike. 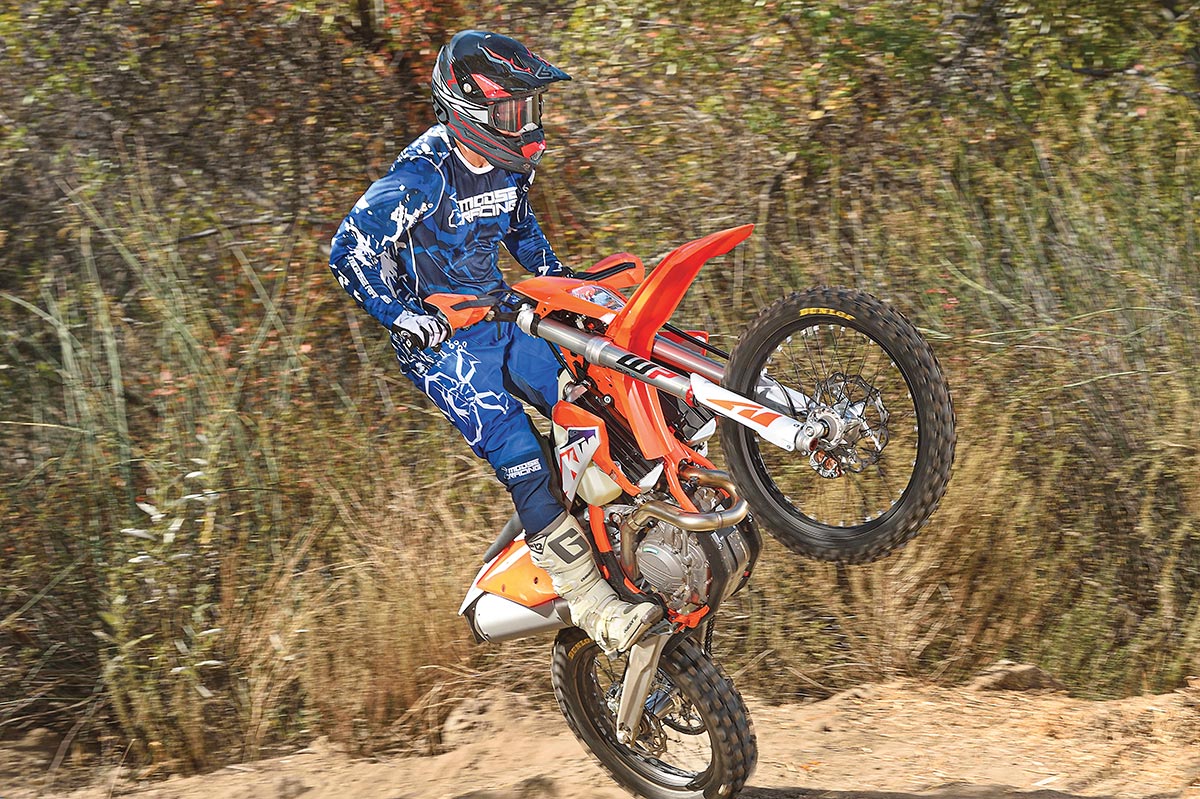 We can’t ignore one of the key reasons many people are drawn to this bike. It makes a good fake dual-sport. At the manufacturer level, KTM can’t market the XCF-W as a dual-sport because it doesn’t meet noise, emissions and equipment requirements. Still, there are plenty of riders who will license this bike for the street. With the headlight, the taillight and the low noise output, it looks like it should be street-legal. It all depends on the state where you live and ride. Just be aware that some of the more uptight states like California will gleefully impound a bike that doesn’t have the proper equipment.

When you add the dual-sport factor, it is apparent that 450XCF-W is one of the most diverse bikes that KTM makes. You get to decide what the bike is. That’s so much better than the other way around. Your bike should not determine what kind of rider you have to be.