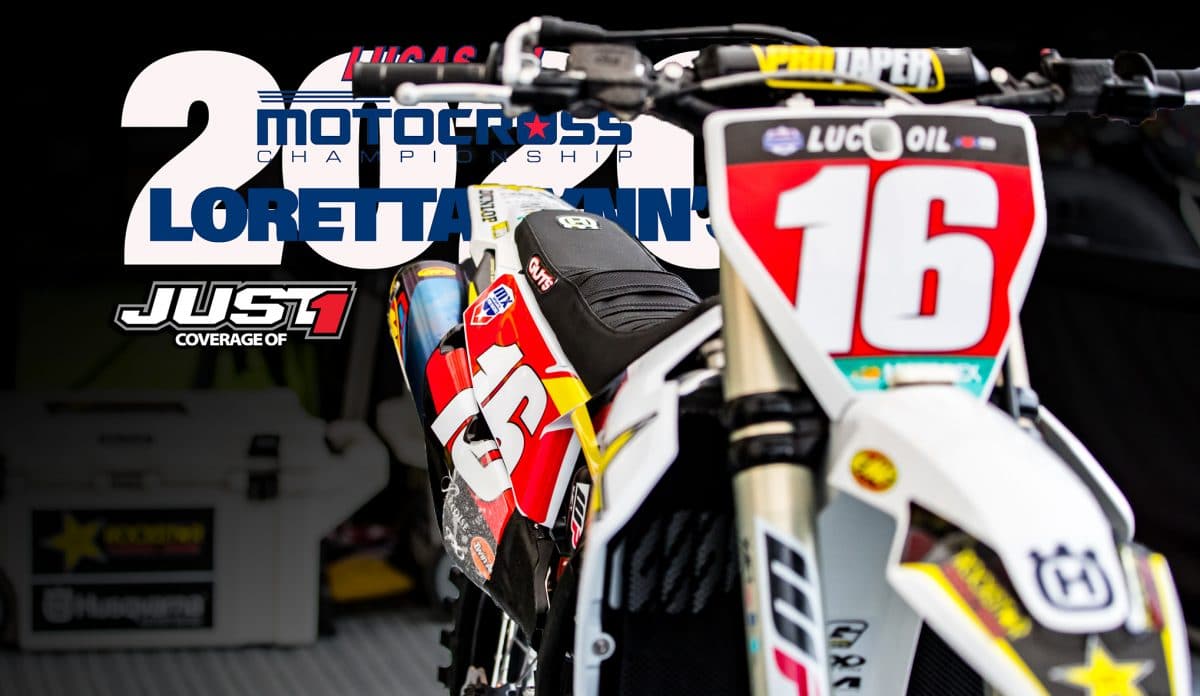 We’re back in the hot, stickiness that is Hurricane Mills, Tennessee for round two of the 2020 Lucas Oil Pro Motocross Championship held at the Loretta Lynn’s Ranch. Last week we saw both Zach Osborne and Dylan Ferrandis get a jump on the rest of their competition by grabbing the round one overalls and the early points lead heading into the rest of this shortened season. Here’s all you need to know going into the second round of the series tomorrow: (for extended coverage of the 2020 Loretta Lynn’s 2 National MX, click here)

For the first time in his career, Zach Osborne took home a Pro Motocross overall win, and what a time to do it as he also came away with the red plate, just a couple of months after taking his first Monster Energy Supercross win. On top of the win and scoring the points lead leaving round one, Osborne made a pretty strong statement as he was the only 450 class rider landing on the podium in both motos with his 2-1 moto scores. Look for his consistency to play to his advantage again this weekend.

Osborne’s Rockstar Energy/ Husqvarna teammate Jason Anderson was the other moto winner in the 450 class for the day, but was a bit farther in the pack for the second moto, ending the day with 1-6 moto scores for second overall. His strong performance in moto one shined a light of hope on him achieving his first outdoor overall, but a sixth in the second moto kept him from that goal. His speed on the technical Loretta Lynn’s track is good, so he should be able to run up front again tomorrow.

Monster Energy/Kawasaki’s Eli Tomac began his weekend stuck in a mud hole, so there was really only going up from there. His abbreviated practice session might have played a factor in his uncharacteristic ride during Saturday’s first moto where he finished seventh, nonetheless it was not the result that many of us were expecting out of the three time reigning champion. He did turn his day around in the second moto, where he fought Osborne for the win at times and ultimately came home second in the moto and third overall for the day. His second moto speed was much closer to what we are used to seeing out of Tomac, so hopefully that he was able to carry that with him through this past week into round two.

Justin Barcia was another rider that found himself inside the top three during one of the two motos last weekend, only adding to the list of riders who have the potential of finishing up front during the motos this summer. His second moto score didn’t exactly reflect his performance in the first, but a seventh was still good enough to keep him inside the top five overall for the weekend.

Red Bull/KTM Factory Racing’s Marvin Musquin kind of quietly found himself in fourth overall last Saturday after being another rider with very consistent finishes, scoring 4-5 in the motos. Although neither finish was on the podium, that kind of consistency is the sort of thing that can lead to championships, plus for his first race in 51 weeks, I’d say it was a pretty good return to competition. With a week under his belt, he will be much more capable of battling for top spots come tomorrow.

I think a lot of people could say they were impressed by Chase Sexton’s 450 class debut last weekend, after being the faster rider in qualifying, running up front in moto one and finishing the second moto in third. The rookie probably would have been in contention for the day’s overall, too if he hadn’t made a small mistake part way through the first moto that pushed him back to 13th. With the first race nerves out of the way, he should be able to get back at it this weekend and put in an even stronger performance.

Cooper Webb announced earlier this week that he will be out of competition for the remainder of the summer. If you remember that gnarly crash he had at the Arlington Supercross earlier this year, he has been battling continuing pains suffered from that crash, and a crash during qualifying last weekend was the final nail in the coffin. For more on Cooper’s injury, click here.

In the 250 class, the results were a little bit tighter than those in the 450s. With that being said, Monster Energy/Star/Yamaha Racing’s Dylan Ferrandis couldn’t have had a more dominant day. He started his morning out as the fastest qualifier and then took the win in both of the motos, leading 30 of the day’s 36 laps. The Frenchman seemed to flow nicely with the ranch, even with it being his very first time to the track compared to most of his competition attending the amateur national there every year as they were growing up. In the last couple of years, Ferrandis has been perfecting his craft more and more every time he hits the track, and now with two supercross championships under his belt and a 450 career on the horizon, this just may be the start to a first outdoor title.

Fresh off of ACL reconstruction, Rockstar Energy/Husqvarna’s RJ Hampshire came out firing on all cylinders to take second overall on the day. He and Jeremy Martin actually tied on points, but his second in moto two was the tie breaker he needed to just edge out Jeremy. With a performance like that in his first race back, he should be back up front to do some more damage tomorrow.

Round one of the Pro Motocross series was also the return of Geico Honda’s Jeremy Martin. Although he wasn’t forced out of Supercross due to injury and was still able to ride during his off time from racing, it was his first gate drop in a few months. That didn’t stop him from making a strong entrance into the 2020 outdoor season to take third overall, swapping moto scores with Hampshire and sits tied for second in the points.

In the first 250 moto last week, it was a sea of Yamaha’s jumping out to the front early. Among that group was Shane McElrath, who had the speed to stay just behind the lead group, but couldn’t quite do better than fourth in either moto. It was still a good start to the season, though, and his consistency at the Loretta Lynn’s Ranch will surely play as a benefit to him tomorrow as well.

Remember this name: Mason Gonzales, out of the Rock River/Yamaha camp was on a mission in his pro motocross debut. Just a week after finishing second in both the 250 and Open Pro Sport classes at the Loretta’s Amateur National, Gonzales moved up to the professional level and proved he had the speed to be there, going 8-12 for the day.