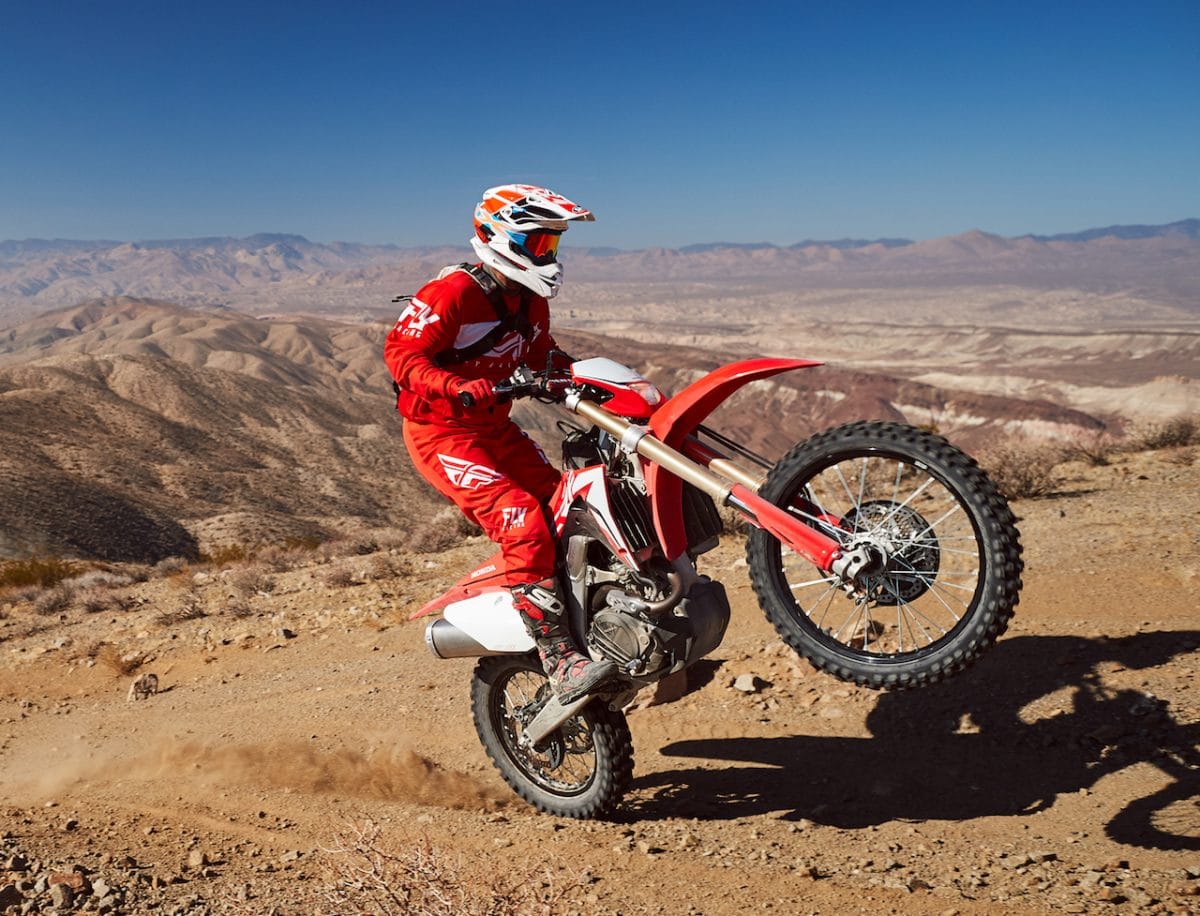 The 2019 Honda CRF450X is imported as an off-road vehicle. The EPA has given the bike its official blessing,(Green Sticker) but that’s beside the point. The real news is that the bike is a modern, fuel-injected 450cc four-stroke designed with trail-riding as its primary focus. Most of the other 450s sold for off-road riders are either full-race competition bikes or stuffed-up dual-sport bikes. The Honda CRF450X is based on the current CRF450R motocross bike, but it has a six-speed gearbox and virtually every part of the bike was tweaked and reaimed for off-road use. 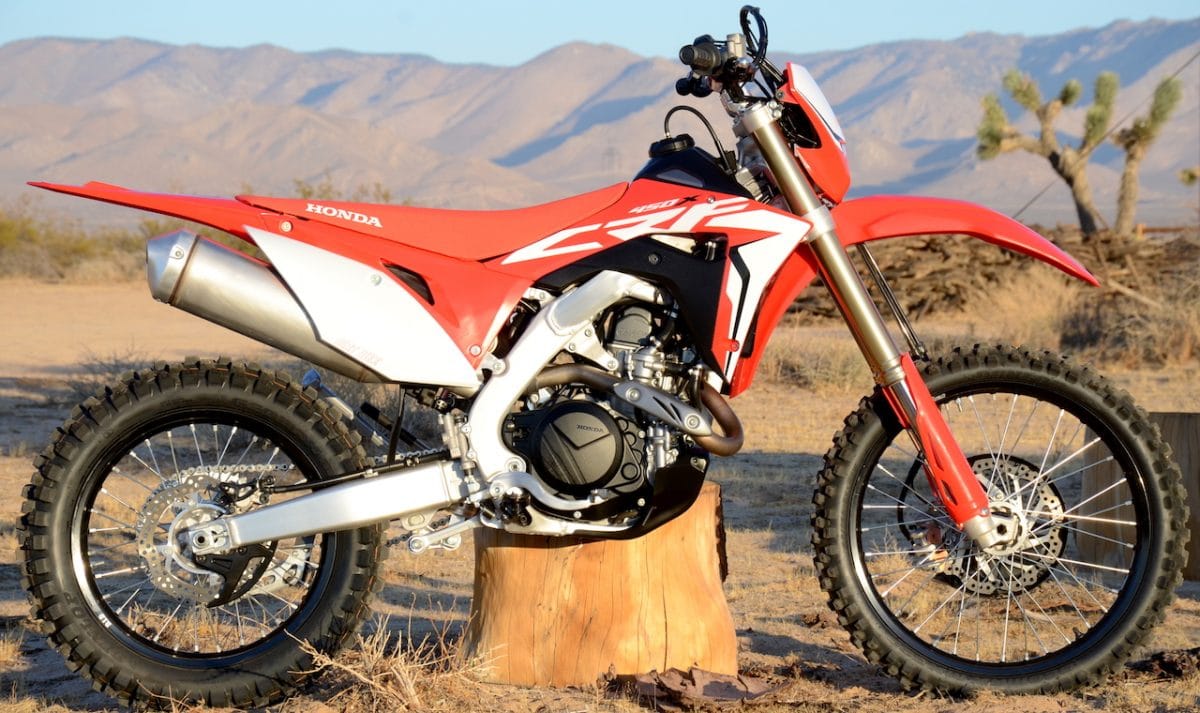 The previous CRF450X, which had been in service since 2005, had come to the end of its run. That bike had earned 11 Pro wins in the SCORE Baja 1000, which gives the new model very big shoes to fill. Like we said, this bike is based on the CRF450R motocross bike, but actually shares very few part numbers. The new X is actually much more closely related to the new Honda CRF450L dual-sport. In fact, it’s the exact same motor, as far as the hard parts go. The X produces more power because of a different (richer) EFI map, a larger head pipe (38.1mm vs 35mm) and a less restrictive muffler that has no built-in catalytic converter. Honda left off the street-legal stuff, of course. The headlight is a halogen unit instead of an LED. There’s a kickstand killswitch, no blinkers and no hangy-down part in the license-plate area. The X doesn’t have a keyed ignition and the instrumentation is a little more spartan. On top of that, the suspension has slightly different settings, but like the L, the fork and shock are high-end KYB units, just like the motocross bike’s. 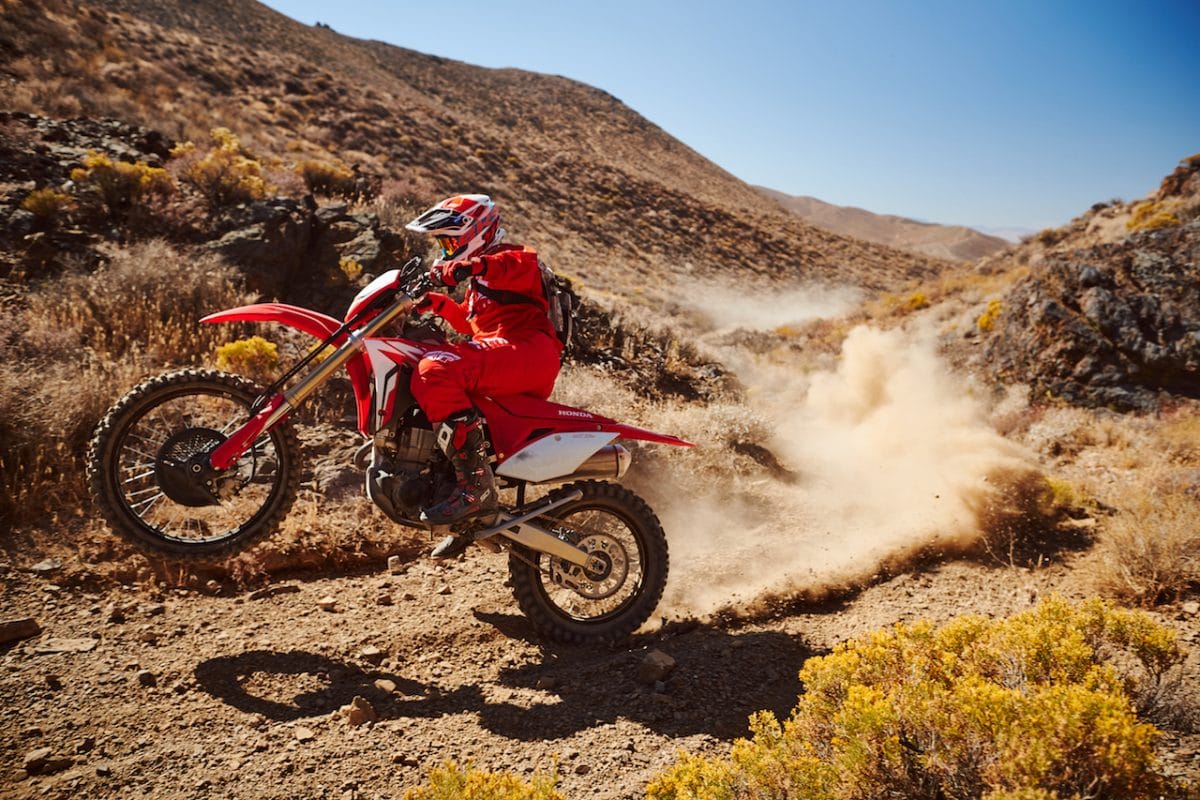 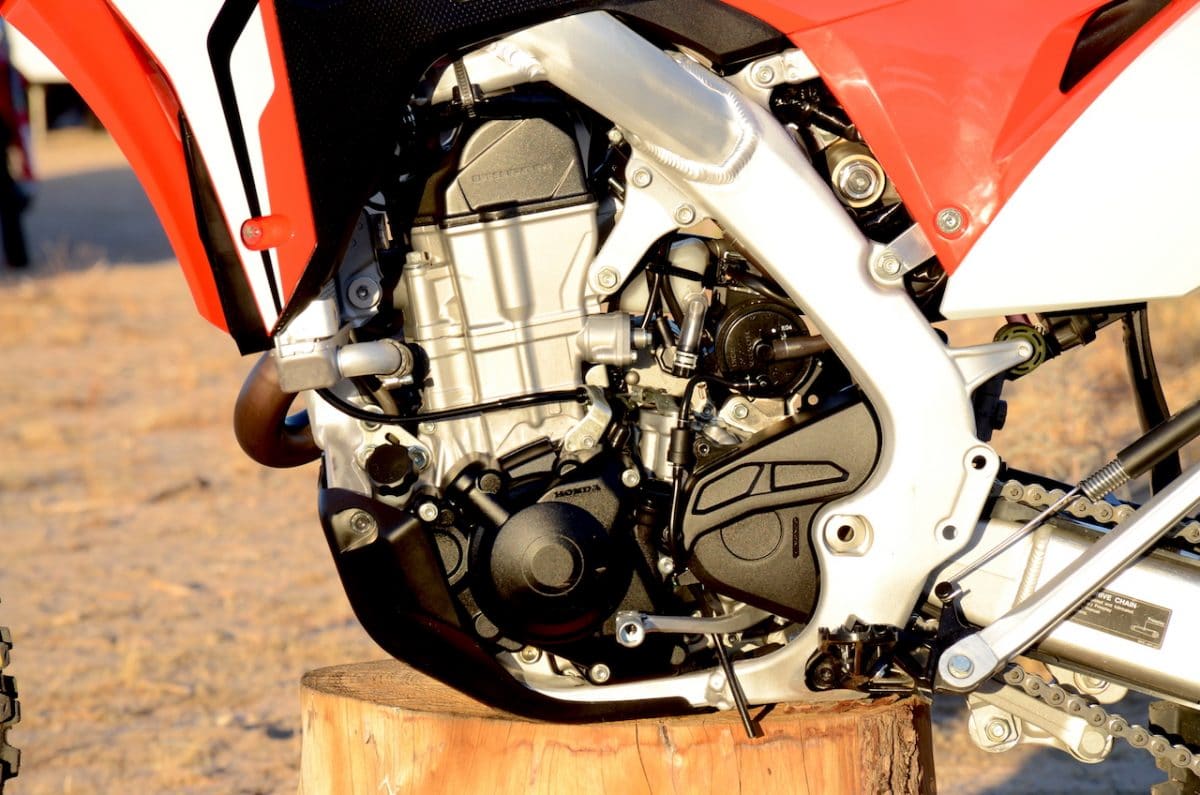 FIRST IMPRESSION
This is what a real off-road bike should be! The new X has a sweet power delivery, it’s super quiet and pure fun on the trail. It’s a stark contrast to the new breed of 60-horsepower off-road brutes like the KTM 450XC-F and Honda’s own CRF450RX. Those bikes are even a handful for the best off-road riders in the world. The X has excellent torque, but when it gets into the arm-yanking zone, it’s far milder than 450cc race bikes. Could you go racing on an X? Maybe. Its biggest handicap wouldn’t be power. It’s just a massive machine. The weight isn’t that far out of line with other bikes operating under the same rules. The Suzuki RMX450Z is the exact same weight,and, while we haven’t yet tested the new-for-2019 Yamaha YZ450FX, it will probably be in the same range. 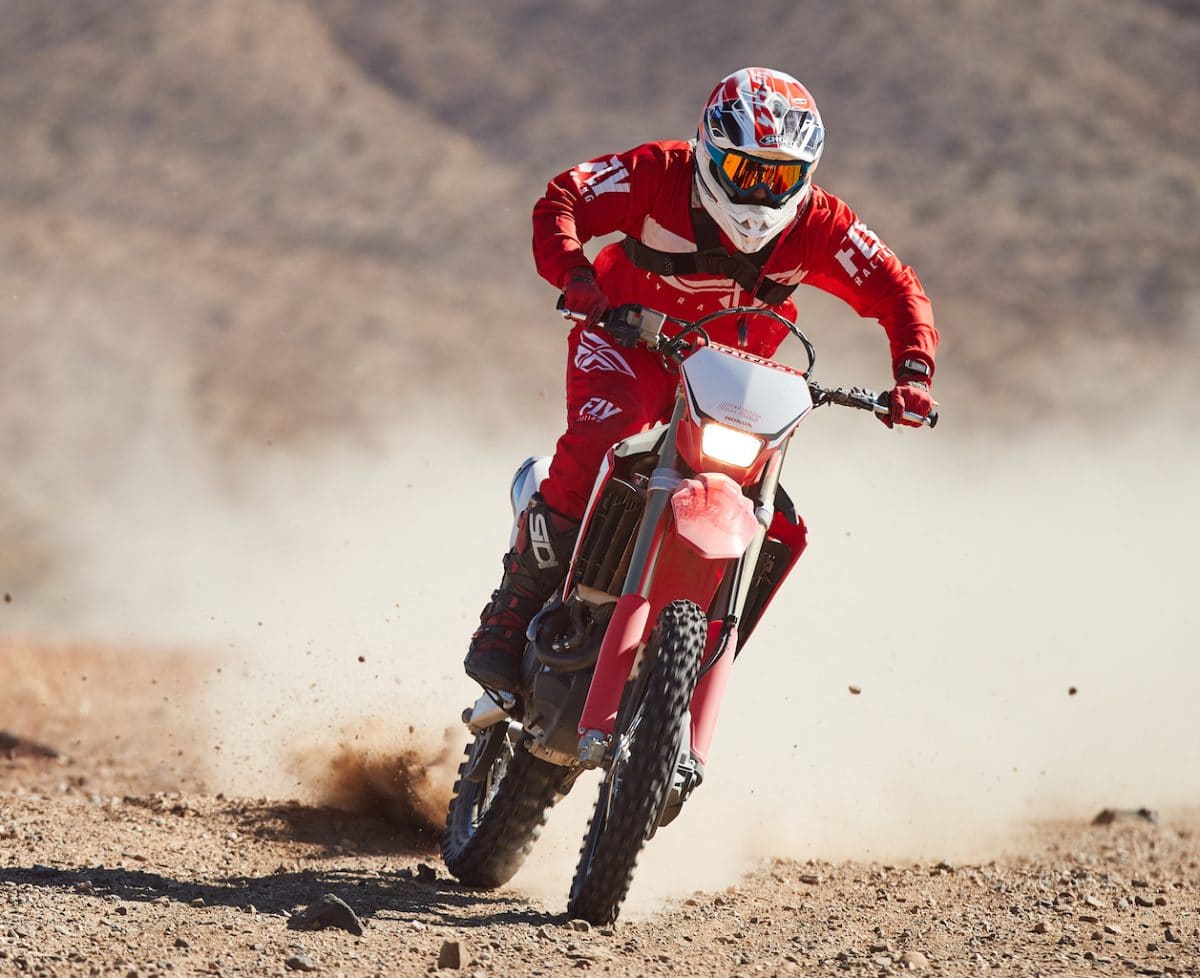 The Honda’s suspension is outstanding. It’s soft, but that’s perfectly appropriate given its mission in life. And at speed, the bike is super stable. It gets more secure and comfortable as speeds get higher and higher. We understand why the previous X was so popular with Baja racers, and we know that guys like Mark Samuels are drooling for this bike. They won’t be disappointed. When you’re crossing desert whoops at 60 mph, the bike goes dead straight. After a day of that, you lose your perspective. You feel like 40 mph is walking speed. The bike’s top speed, we estimate, is around 90mph

Honda did a great job with the gear ratios. First gear is taller than you might expect, but that’s actually a good thing. Too often, six-speed gearboxes have a granny gear that’s so low it’s unusable. The X puts you in first gear often, and you still don’t get too worried about stalling. In this respect, the X is much better than the CRF450L dual-sport we tested last month. The gear ratios are the same, but the X’s mapping is better, plus it has more low-end power.

Honda let us ride the bike in the desert for a full day prior to its release to dealers. We will have a brand-new X in our dirty hands for a full test shortly, and we can’t wait. This is only of the few EPA-legal trail bikes that we consider 100 percent ready for the trail in stock form. There are no throttle stops to remove, no holes to cut in the airbox and no remapping to do. Thank’s Honda. To see more of this machine in action check out our 2019 CRF450X Video Test. 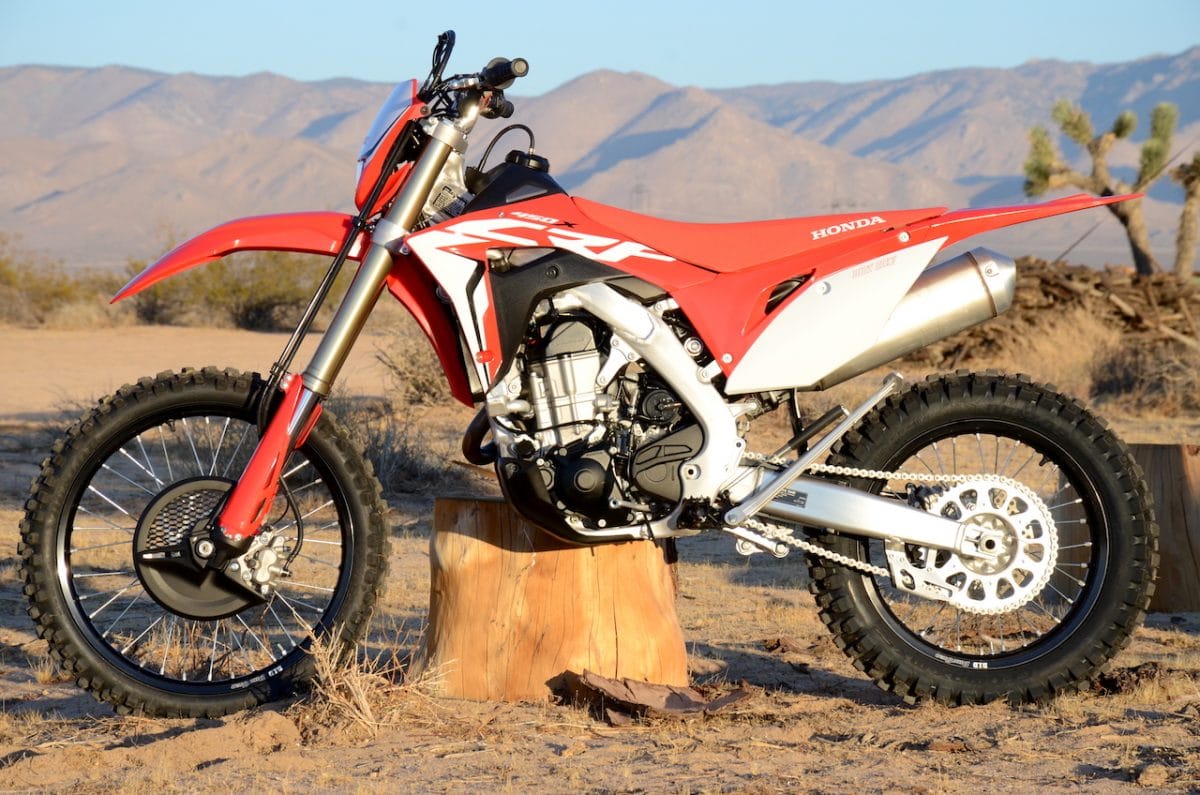