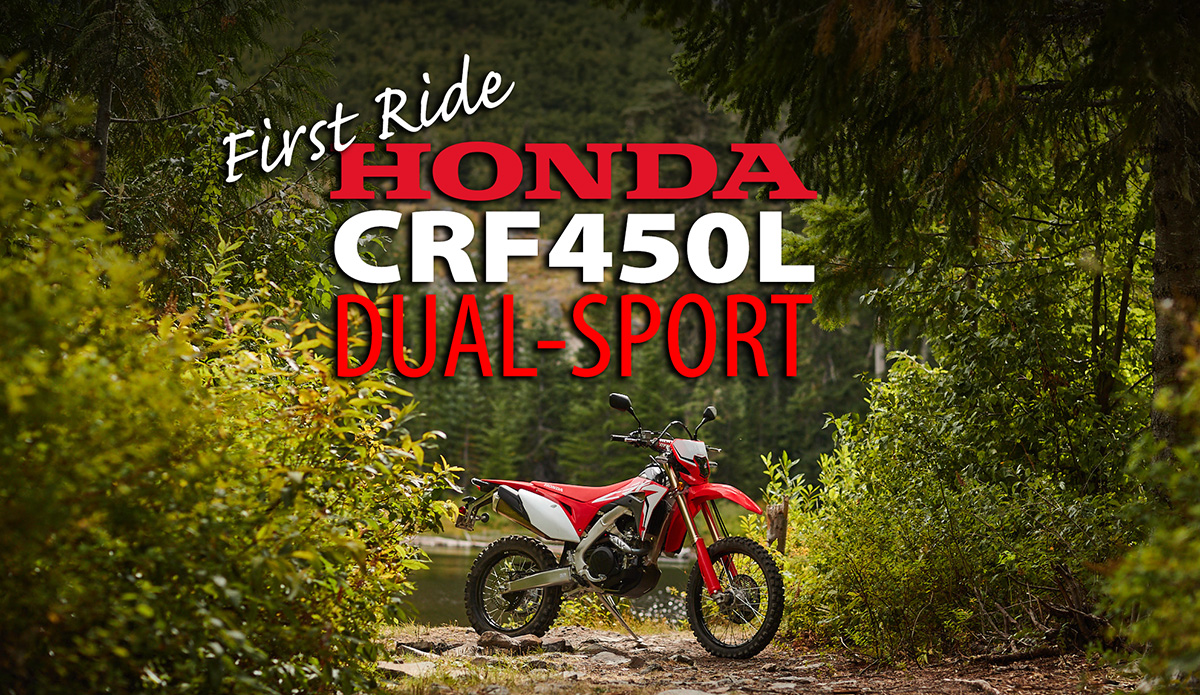 Honda allowed us to get a riding impression of the 2019 CRF450L last week prior to the bike’s arrival in dealerships. The intro was held in Packwood, Washington, which is sort of a dual-sport Mecca. It’s a refueling stop on the Washington Backcountry Discovery Route, so there was a nonstop parade of adventure bikes and dual-sport bikes filing through town.

The bike was huge news when it was announced last spring, and the chatrooms haven’t stopped buzzing since. The new L is based on the latest version of the Honda CRF450R motocross bike, but with full 50-state EPA and DOT approval. For the original announcement and technical run-down of the 2019 Honda CRF450L, click here. The overview is that the bike has as much of the motocross bike as possible. It’s the same motor layout, but the cases are wider to accommodate a six-speed gearbox and a larger oil capacity. That, in turn, created the need for some slight frame changes, but the geometry and even the suspension components are the same as the 450R’s. The fuel tank is still titanium, but it has a capacity of 2.01 gallons, rather than the R’s 1.67. 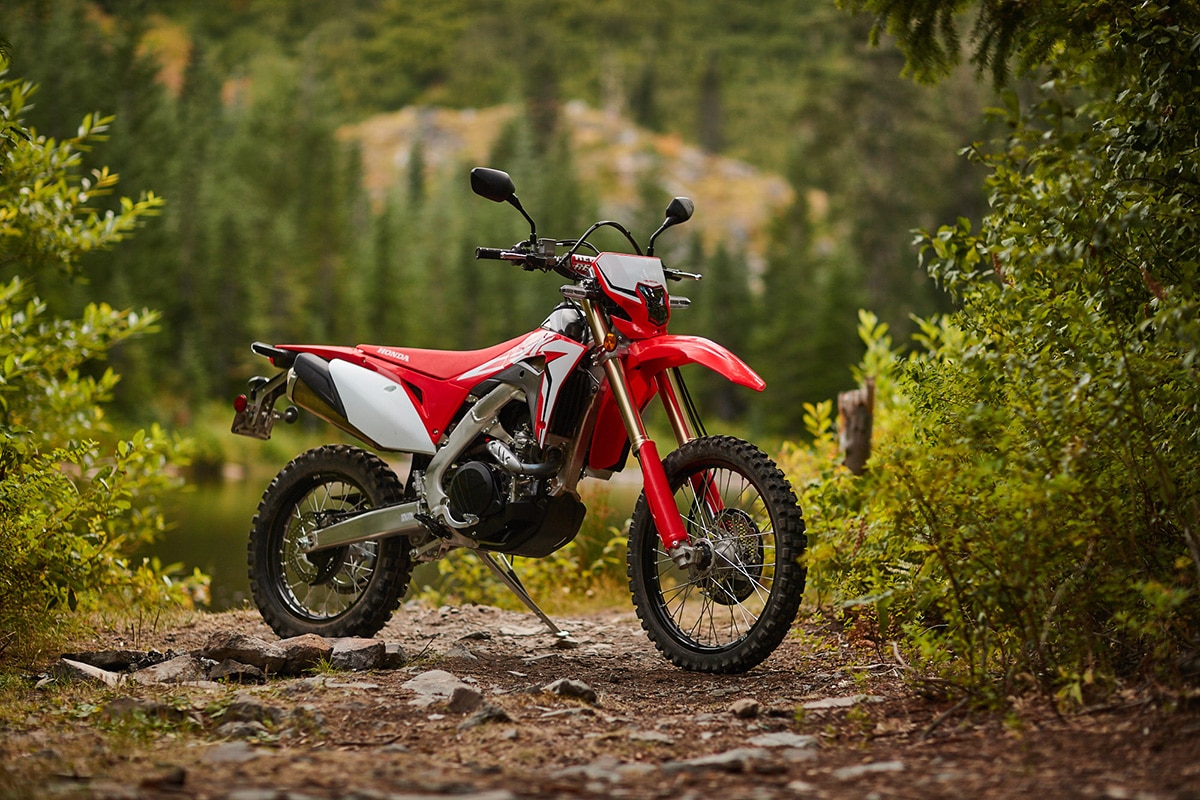 Honda put substantial effort into getting the noise level down. This goes way beyond the big stainless steel muffler. The engine cases even have external plastic guards to reduce mechanical noise. And, of course, there are emission concessions. The motor’s ECU is locked, the muffler has a catalyst and there’s an air-injection pump hanging off the right side of the motor, although it’s at least somewhat smaller than the one on the Honda XR650L. 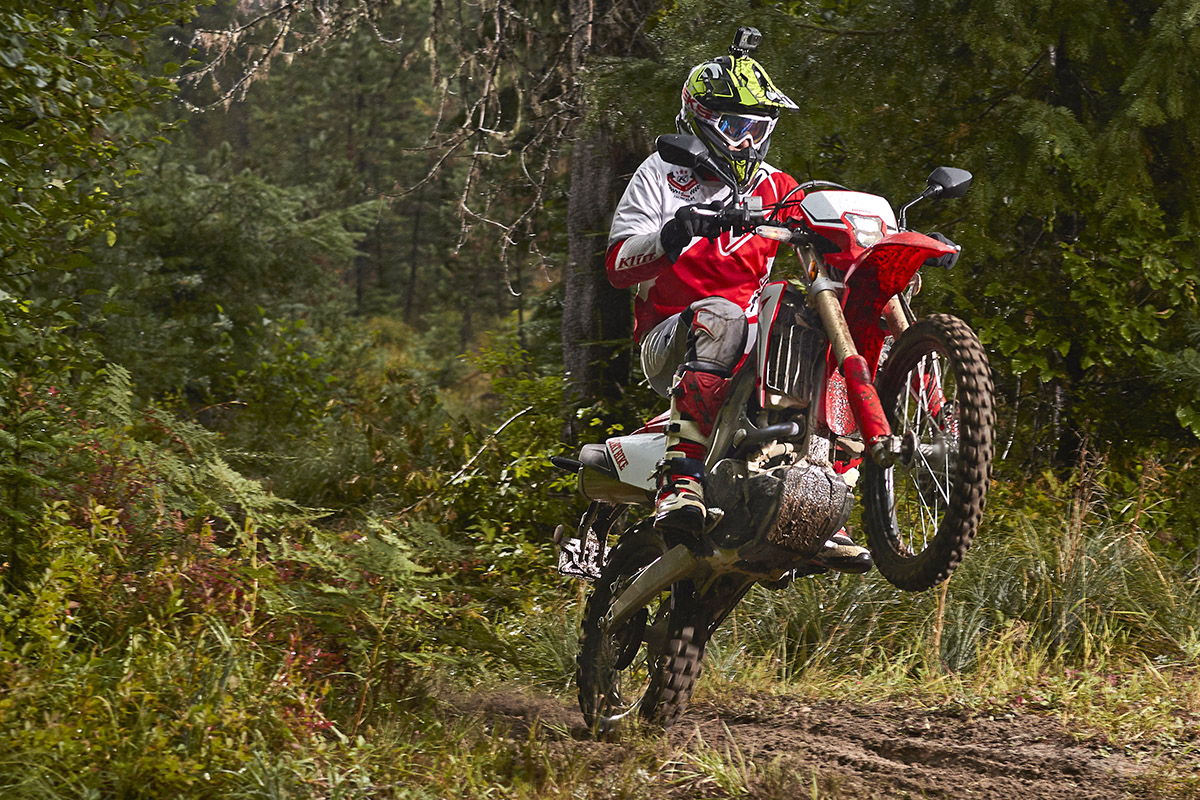 What really set off the chat rooms is the bike’s claimed weight. The brochure says it’s 289 pounds with a full tank. We will at least mention that Honda has a new policy of honesty in its weight figures. We weigh all test bikes ourselves (with an empty tank) and found that Honda’s figures are spot-on once you allow for 6 pounds per gallon. Even so, the bike is heavy. Where is the weight? The air pump, the muffler and the engine covers only account for so much. More of it is just Honda being Honda. The subframe is so substantial that you can stand on the rear fender. The kickstand can easily support the weight of the bike with a rider standing on the pegs. The mirrors are large and burly. All of those are good things to overbuild, but once these bike end up in the general population, they will shed weight quickly.

Our test bike had Dunlop D606 full knobbies rather than the street-oriented stockers. Why does the bike come with street tires? Noise. The D606s are otherwise perfectly legal. We put in about 110 miles of single-track, two-track and dirt roads with only a little bit of pavement to connect trails. After it was over, the bike exceeded all our expectations. To deal with the 289-pound elephant in the room first, yes, it’s heavy and it feels heavy. We knew what it weighed going in. With or without fuel, it’s 30 pounds heavier than a Husqvarna FE450 and 20 pounds heavier than a Beta 500RR-S, both of which we have weighed on our own scale.

The weight comes into play on steep hills and narrow single track, but it’s not something you think about all the time. The attention grabber is how sweet the motor is. Honda did a spectacular job with the power. The emission restrictions are pretty much invisible, and Honda did it without a throttle stop or any other form of cheating. There’s no backfire on deceleration, no unexpected cough and die syndrome. It just has deep, rich power on demand. The bike is so quiet that you don’t expect much power, so it can be a little surprising at first. But you get used to it. The only complaint we have regarding the motor is that it seems very revvy as if it has very little flywheel effect. You can stall it at very low speed if you’re not careful. 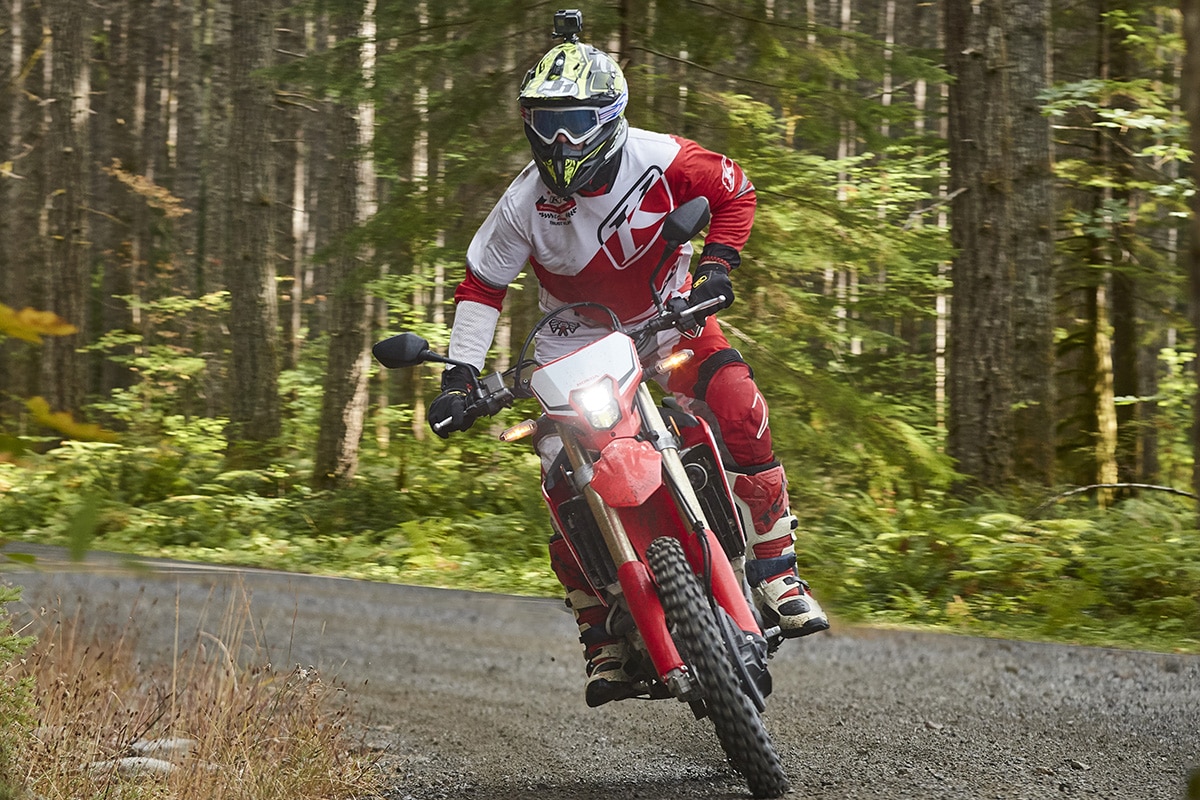 Needless to say, the CRF450L is nowhere near as powerful as a CRF450R motocrosser. Nothing is. For that matter, the CRF450RX off-road racer and that whole breed of off-road racing bikes are all preposterously over-powered for the trail. Those bike are for racing, whereas the L has excellent power and a very good delivery for real off-road riding. Even the gear ratios are pretty much spot on. Occasionally you might want a lower first gear, but frankly, the low-end power is good enough that these instances will be rare. Likewise, if you’re bombing down the interstate, you might look for a gear that’s even taller than sixth, but most riders will keep the stock sprockets.

Of all the things that Honda did right, suspension is on top of the list. The fork and shock are top-shelf units, just like those of the MX bike. The L is softer, as you would expect, but the spring and damping rates are about perfect for the trails of the Pacific Northwest. We tried to bottom the fork on the rare whoops sections and didn’t do it. The rear end can hit bottom, but only when you expect it. Suspension is clearly the bike’s strongest asset.

We’re not sure if that will be enough to carry the bike through comparisons with the Husqvarna FE450, the Beta 430RR or the as-yet unreleased KTM 450EXC Six Days. The weight is a big issue, and the Honda surrenders fuel capacity and equipment like oversize bars and, in the case of the Beta, instrumentation.  The price is slightly below those bikes: The Honda sells for $10,399, whereas the Beta is $10,499, and the Husqvarna is $11,099. We’re looking forward to getting our test bike on our local turf for more feedback. It will appear in the December, 2018 print issue of Dirt Bike.