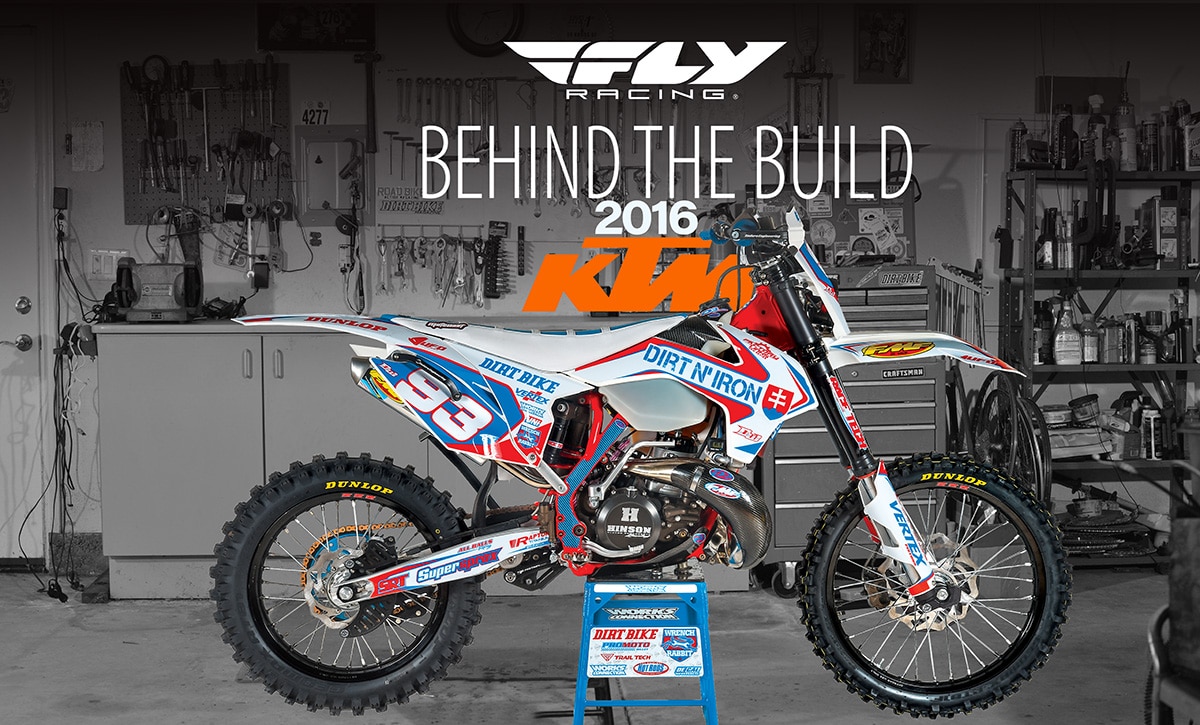 We have all seen a motorcycle that we have dreamed of owning one day. For our buddy Rado, it was the 2016 Six Days edition KTM 300XC-W. This machine was decked out in his home country’s colors because that’s where the ISDE was being held—and who wouldn’t want a patriotic 300cc two-stroke in their garage? These bikes were produced in limited numbers and are usually very expensive to purchase, so we decided to work with Rado to make his dream a reality—but with an unexpected plot twist.

TWIST AND SHOUT
Without a huge amount of cash in your pocket, purchasing an original 2016 Six Days 300XC-W is almost impossible, and that’s if you can even find one. So, we brainstormed, found a decent-looking 2012 300XC (not a W but close enough) online and purchased it. After all, the KTM 300 has been good for a long time, and we were going to completely rebuild it anyway. When the machine arrived, it was definitely in rough shape. As a matter of fact, it was what we refer to as “roached out.”

The fastest part of the entire build happened next. The complete teardown of this two-stroke took about two hours. Once it was torn down, it took about two weeks before everything was clean enough to start inspecting. With everything clean, we assessed our situation. It was looking rough, but the challenge was accepted, because we never back down from a challenge.

CHASSIS
The chassis needed lots of TLC all the way around. The main frame was sent to San Diego Powder Coating. The suspension was dropped off at Race Tech, while the subframe and swingarm got the royal vapor-blasting treatment from the crew over at Moto Blasters. All the chassis bearings were replaced using parts from factory links, while the carburetor, hydraulic clutch and braking systems were rebuilt using kits from All Balls Racing. With the chassis needing this much attention, you can imagine how bad the wheel situation was. In one word, the wheels were “square,” and a square-shaped object does not roll very well. A set of SRT complete wheels with silver hubs and black rims was installed. We wrapped them with Dunlop AT81 tires and heavy-duty tubes for flat prevention.

Race Tech had to completely rebuild the suspension internally because everything was worn out. Just like engine oil, suspension oil needs to be changed, and when it goes bad, friction increases, making bushings and seals go bad. Thankfully, the major components, such as the tubes, were in decent shape and could be reused, so we had some extra money in the budget to get them re-coated, which added some bling to the project.

ENGINE
Brad at Parapros is a two-stroke wizard when it comes to rebuilding engines, and with kits available from companies like Wrench Rabbit that provide just about everything you can possibly need parts-wise to completely rebuild an engine, this process can be accomplished in an afternoon. Now ours took longer, because once Parapros had the engine apart, the cases went to Moto Blasters in Florida for some specialty coatings to make it stand out. Internal engine specs weren’t changed radically, but we did install an RK Tech billet aluminum head that comes with a performance-increase money-back guarantee.

To top it all off, the heads are available in a variety of colors. The only other real engine performance modification done internally was a Moto Tassinari VForce 4 intake system, and the carburetor was re-jetted using a kit from JD Jetting. Clutches take major abuse, and although the OEM KTM parts are usually pretty strong, we replaced them with a Hinson billetproof unit and billet heat-treated clutch cover just to be on the safe side. When doing a complete rebuild, whether it’s the engine or entire bike, we strongly recommend replacing all the nuts and bolts. There are multiple companies out there making kits for this. On this build we used a Nickel Wurks kit from Specbolt, which is stronger than OEM and add some bling in the process. A complete FMF exhaust system topped off the engine performance upgrades on this build. 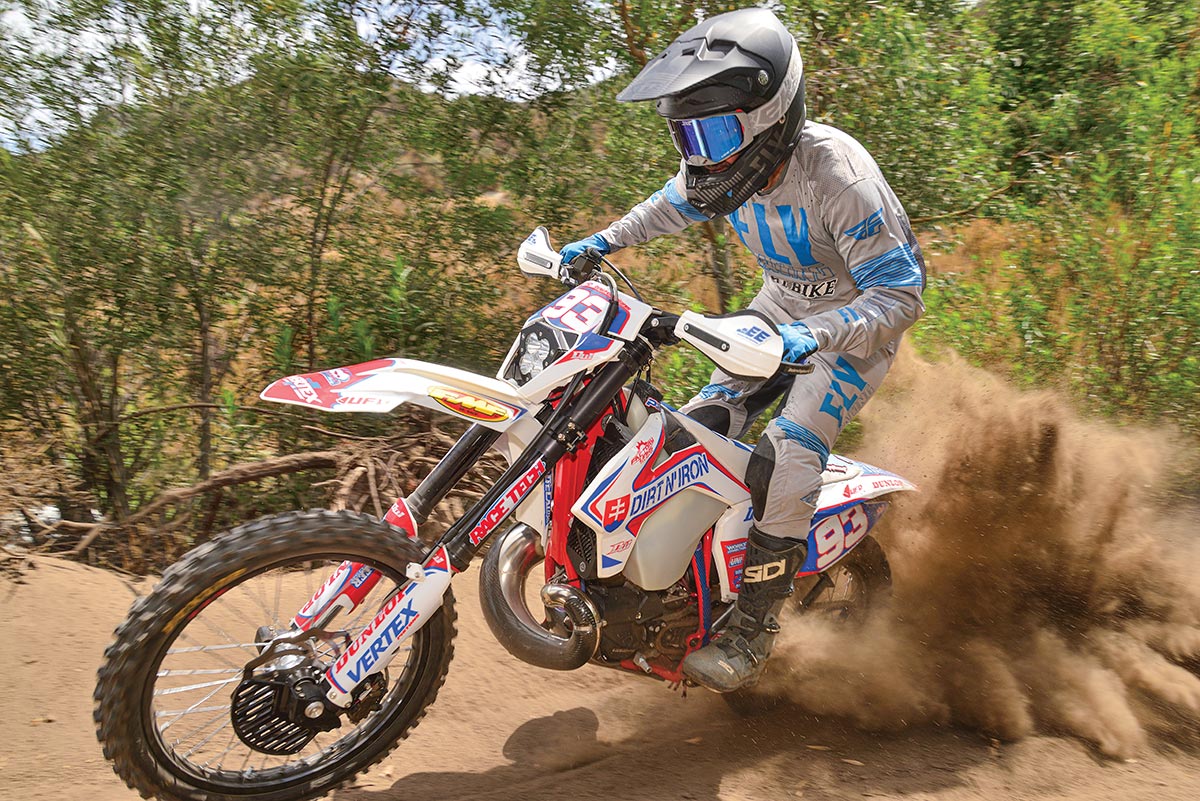 DREAM COME TRUE
Builds like this “Dirt-N-Iron” KTM 300XC-W are great to be a part of for a laundry list of reasons. One, there is no greater feeling than saving a perfectly good motorcycle from the crusher. Two, a great story always emerges from the ashes and lessons are learned. Three, the friendships and bonds made in the garage while working towards a common goal will last a lifetime. This bike is a blast to ride. It has the old-school, 300cc, carbureted, two-stroke powerband that we know and love. The suspension was a little soft for our test riders, but that was to be expected. Race Tech set it up for Rado’s weight and speed.

All the upgrades—such as the RK Tech head, Trail Tech fan kit, Baja Designs light, Voyager Pro GPS, Fastway linkage guard, TM Designworks Slide-N-Glide kit, P3 Carbon protection and Enduro Engineering wraparound handguard system—improved the usability of the bike. We are convinced there are more bolt-on items available for this bike now than when it was brand new almost a decade ago, and for that we are definitely happy.