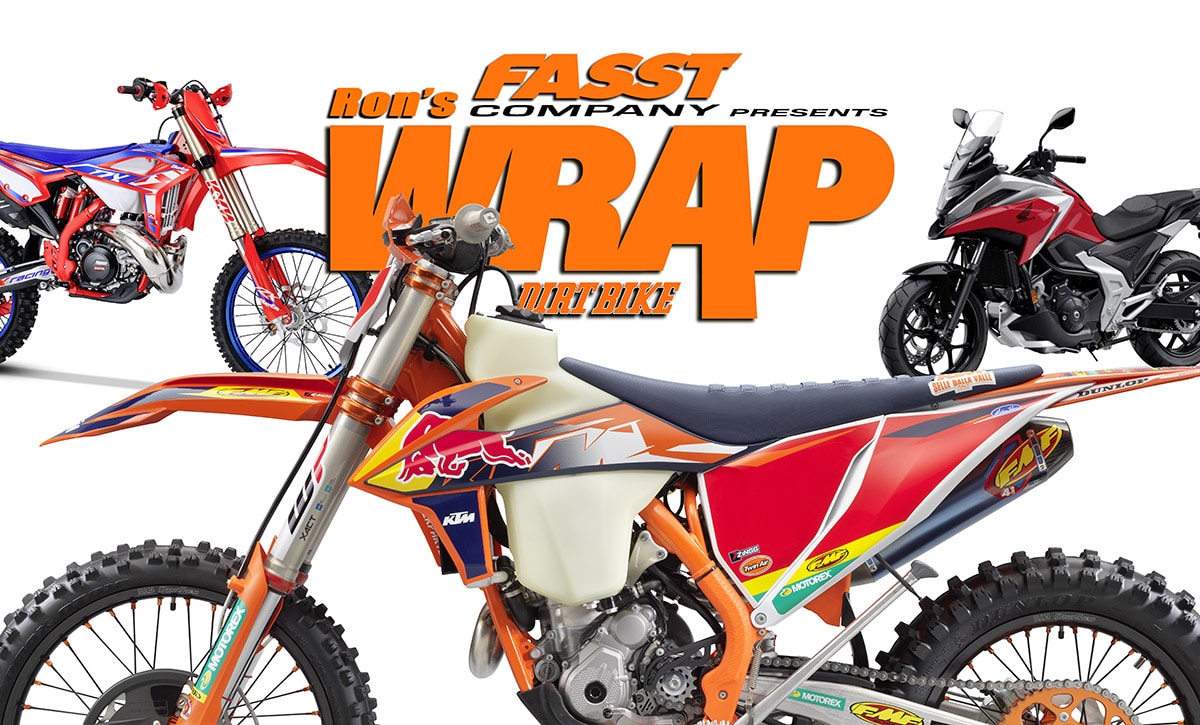 The KTM Factory Editions have been a tradition in the motocross world for over 10 years. These are premium-level motocross bikes that are more or less replicas of the machines ridden by Cooper Webb, Marvin Musquin and the Red Bull KTM Factory motocross team. Now, off-road riders are getting the same treatment. The KTM 350XC-F Factory Edition is a tribute to the bike that Kailub Russell has used to dominate the GNCC XC-1 Pro class for eight consecutive years. The bike is a 2022 350XC-F with a long list of upgrades, including:

We got a chance to ride the 2022 KTM 350XC-F in what turned out to be the most demanding GNCC of the year: the rain-soaked finale in Crawfordsville, Indianna. Dirt Bike videographer Travis Fant volunteered for the duty and came back somewhat traumatized, but intact. Of course, he loved the bike. What’s not to love? The 350XC-W not only is the bike that Kailub Russell prefers (although he has raced the 450 and 250 at different times), but it’s also the bike used by most EnduroCross riders and a large group of Vet motocrossers, who prefer it over the SX for its six-speed gearbox.

Travis is a dedicated motocross rider who owns a 450SX. He instantly fell in love with the 350. It’s doubtful that there would have been any better choice for not only for his first GNCC, but his first-ever mud survival run. The cool thing about the bike is that it’s not just a Red Bull sticker kit. It’s truly thought out for cross-country racing. Case in point, the solid rear brake rotor. Kailub and crew learned long ago that the vented rotor wears brake pads at an alarming rate in the mud. The fuel tank also can accept a Dry Break quick-fill. Travis declined this feature and used an adapter for a threaded gas cap. The last thing he wanted was a quick pit stop. The various guards are all thought out well to prevent mud build-up. 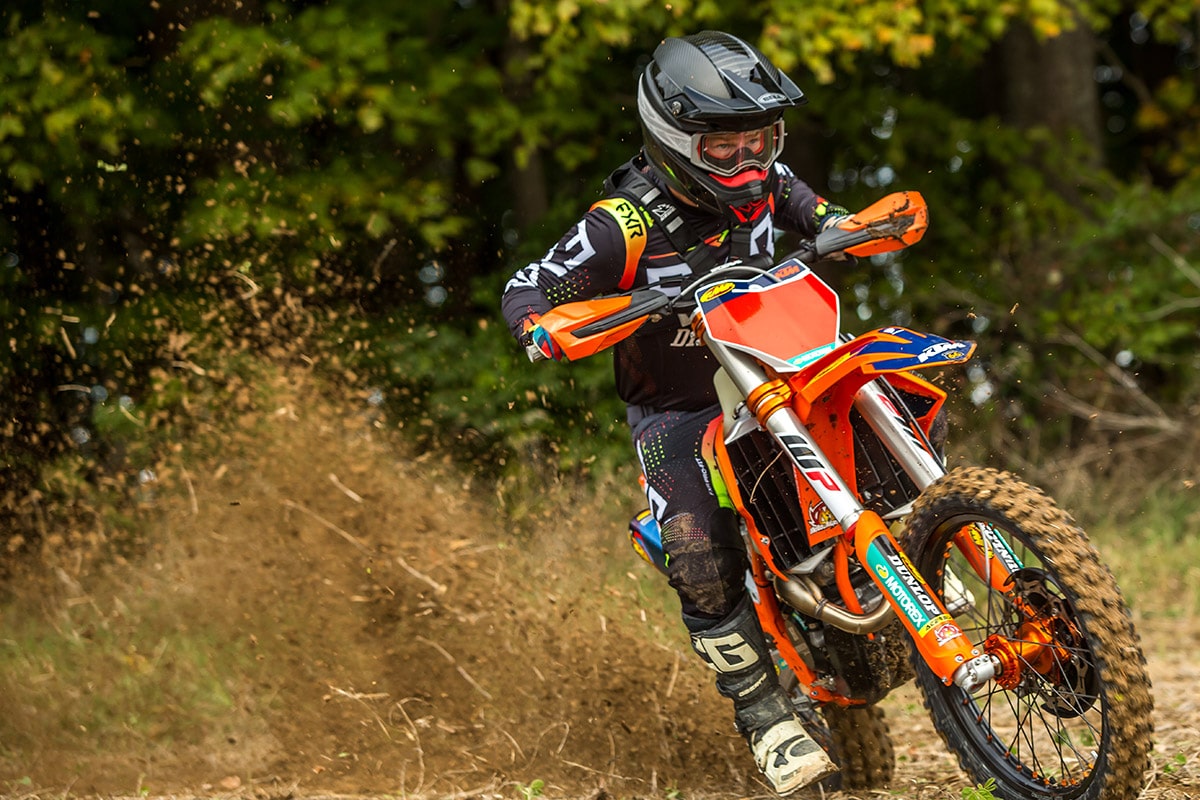 TRAVIS: “In comparison to the 450, I know it’s not much lighter on the scale but it felt lighter. Maybe less moving parts? Felt like I could move it around a little more. The suspension was plush and had good hold up testing it the day before the race. Raceday everything was different, but the suspension was the last of my worries. The motor was “light” feeling and revved to the moon. Third gear seemed like it pulled forever out on the corn fields. I liked that it wasn’t as jerky as an SXF model in 1st/2nd gear in tight sections. That made for easy throttle control maneuvering the bike in trees.
“Those split triple clamps are the unsung hero of any KTM. Less rigid feeling in the hands! I tested map one and two plus traction control beforehand. Not a huge fan of map one. It was a little too mellow for my liking. Traction control wasn’t for me either. I’d rather have a little more punch when I need it and get to the high rpms where this bike shines. The clutch was good. Brakes never had issues in the mud on race day. Tank was large enough for a two-hour race without a pit stop.
As far as complaints go, KTM needs to fix their electronics suite behind the number plate. It’s exposed and wires pull out … on all their models. The FI light cable and start cable does this. Even on 2016-2018 era KTMs. Don’t need that happening in a GNCC. Seat can be harsh on some people butts. I like the extra grip but it’s not for everyone. I would run the Acerbis frame guards instead of the plastic ones on the bike. The Acerbis guards are great in the wet. Webb got a lot of riders hooked on those guards after the San Diego mudder a couple years ago. ” For Travis Fant’s full story and tips for other GNCC newbies, check out the February, 2022 print edition of Dirt Bike.

Beta is now committed to the motocross worldl. The 2022 limited edition 300RX for 2022 has been revealed with a number of updates. Here’s what the guys at Beta have said: 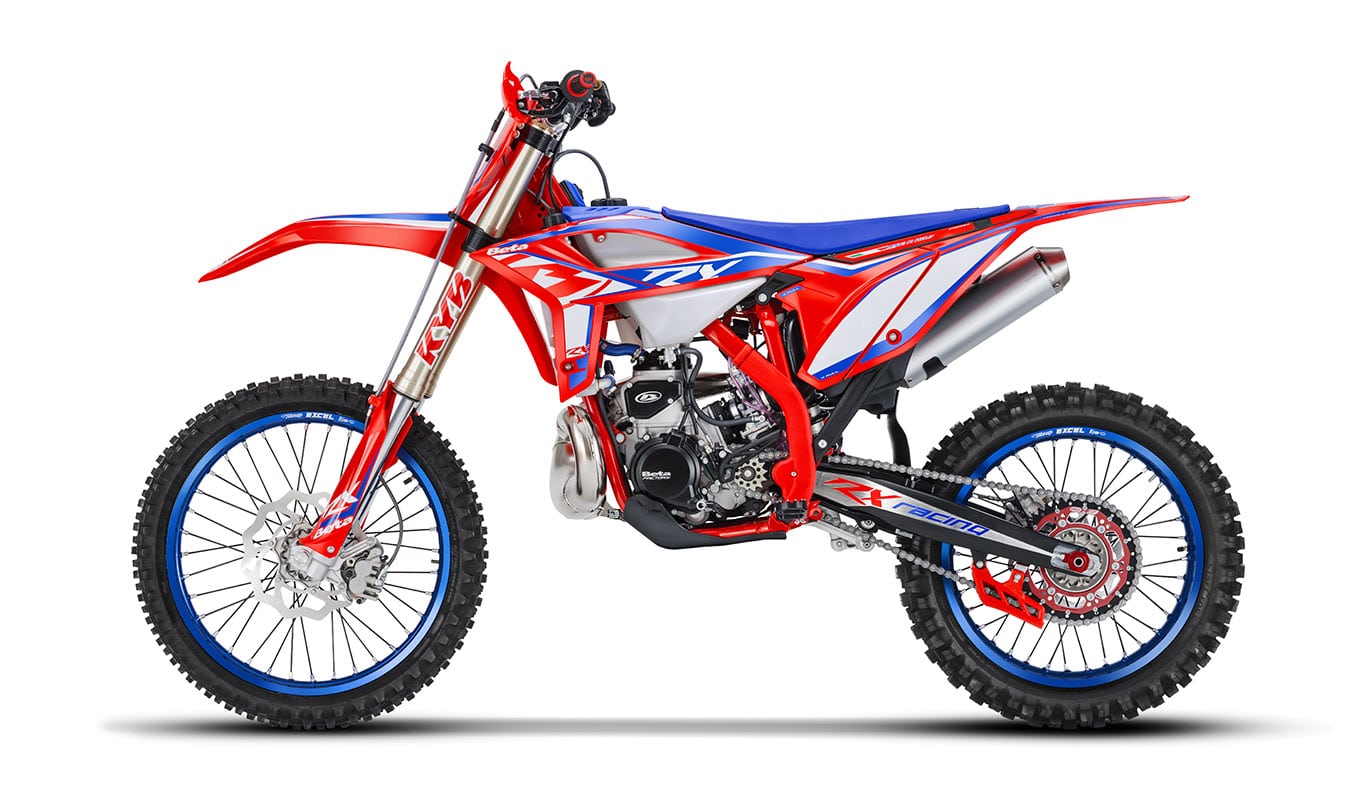 Honda just introduced a new mini which might soon fill the pits. The 110cc Navi is decidedly street oriented, but that never stopped Grom owners from taking them off road.
Somewhat of a mix between the Ruckus and the Grom, the Navi has a V-Matic automatic transmission.
MSRP: $1,807
Colors: Red; Grasshopper Green; Nut Brown; Ranger Green
Availability: January 2022 (February in California)

NC750X
The Honda NC750X falls into that gray area between adventure bikes and pure street bikes. It clearly has some features that are appealing to the guys who want to go off-road touring, but the wheels, itres and suspension havn’t much of a dirt pedigree. But, the price in pretty good and it has Honda Selectable Torque Control (HSTC) is standard on both manual-transmission and automatic Dual Clutch Transmission models (DCT),

The SCORE Baja 1000 is underway. This year it’s long, covering over 1000 miles on the way to LaPaz. The 1x SLR Honda team decided to forgo some of the other SCORE races this year and concentrate on the 1000. Sadly, Justin Jones decided not to ride this time, but Mark Samuels and Justin Morgan will anchor the team once more.