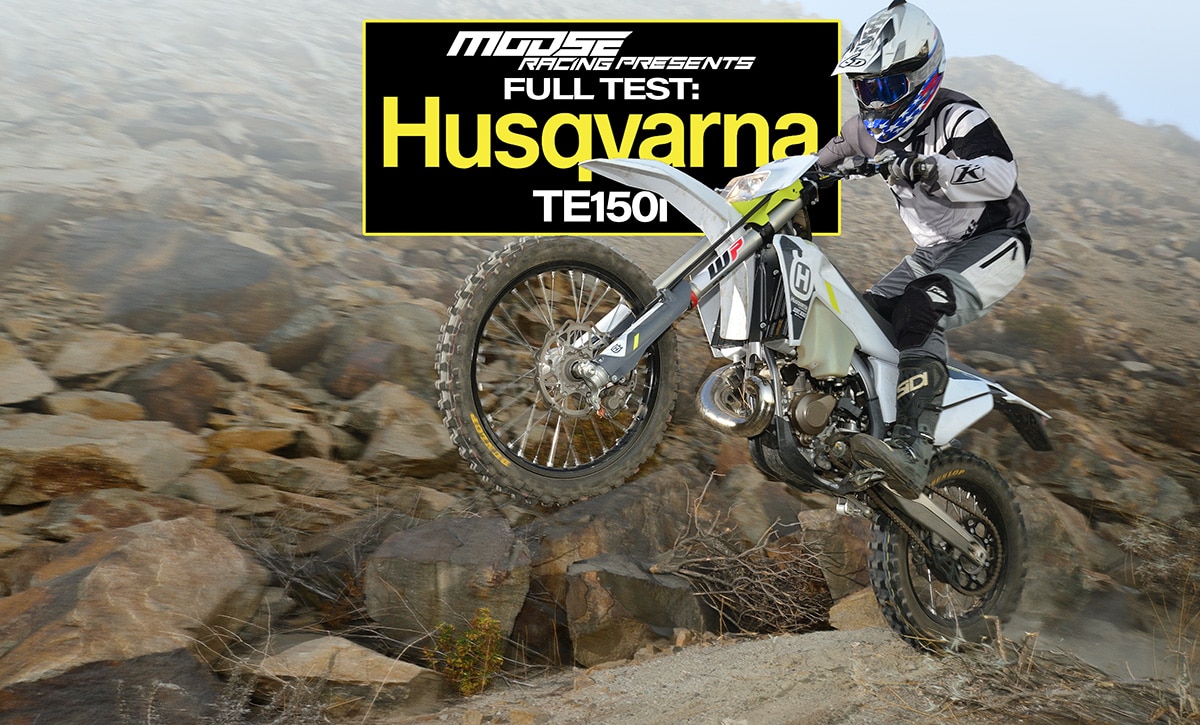 Some bikes can be understood most easily by process of elimination. You gotta understand what they aren’t before you understand what they are. Unfortunately, that doesn’t help in the case of the Husqvarna TE150i. Defining what it can’t do is hard. It’s perfect for youth as well as vets and seniors. It’s a natural entry-level machine, but it appeals to pros and intermediates, too. It’s a trail bike, but it already has an extensive racing pedigree. The Husky is one of those bikes that can be anything you want it to be.

THE PIECES AND THE PUZZLE
If you’ve been around long enough, you remember there was once a thriving 200 class in the U.S. The key players were Kawasaki and KTM, but Yamaha, Honda and Suzuki had their own takes as well. The riders left behind by the decline of that class are among those who have planted their flag on the TE150i, but it goes beyond that, because the 150 is lighter, faster and more sophisticated than the 200s of old.

You won’t find anything exactly like the Husky 150 in the extended Austrian brotherhood of KTM and GasGas off-road bikes, although several machines are built on the same platform. The TE150i is based on the Husqvarna TC125 motocross bike, but with a 4mm increase in bore, stretching the displacement to 144cc. The TE also has electric start, oil injection and TPI fuel injection, none of which can be found on the TC125. Both are six-speeds, but first is considerably lower on the 150, while sixth is about 10 percent taller. The KTM 150XC-W is another blood relative. It has the same TPI motor but housed in a different chassis. Where the KTM has PDS rear suspension, the Husky has linkage connecting the chassis to the Xact 5750 shock, which is the same as the 125 MX bike but with softer valving. Both the KTM and the Husky off-road bikes use the WP XPLOR coil-spring fork. This is a split-function fork with a white compression damping adjuster on the top of the left leg and a red rebound clicker on the right. There’s also a preload adjuster at the top of each leg. And, of course, the TE150i has a headlight, a taillight and an odometer. The lights aren’t powerful enough for real night riding, but they more or less announce the bike’s intended purpose as a trail machine.

Last year Magura supplied all the hydraulic components for Husqvarna’s off-road bikes. This included both brakes and the hydraulic clutch. For 2022, a Spanish company called Braktec will supply these parts. That’s the only significant change for the new model year. 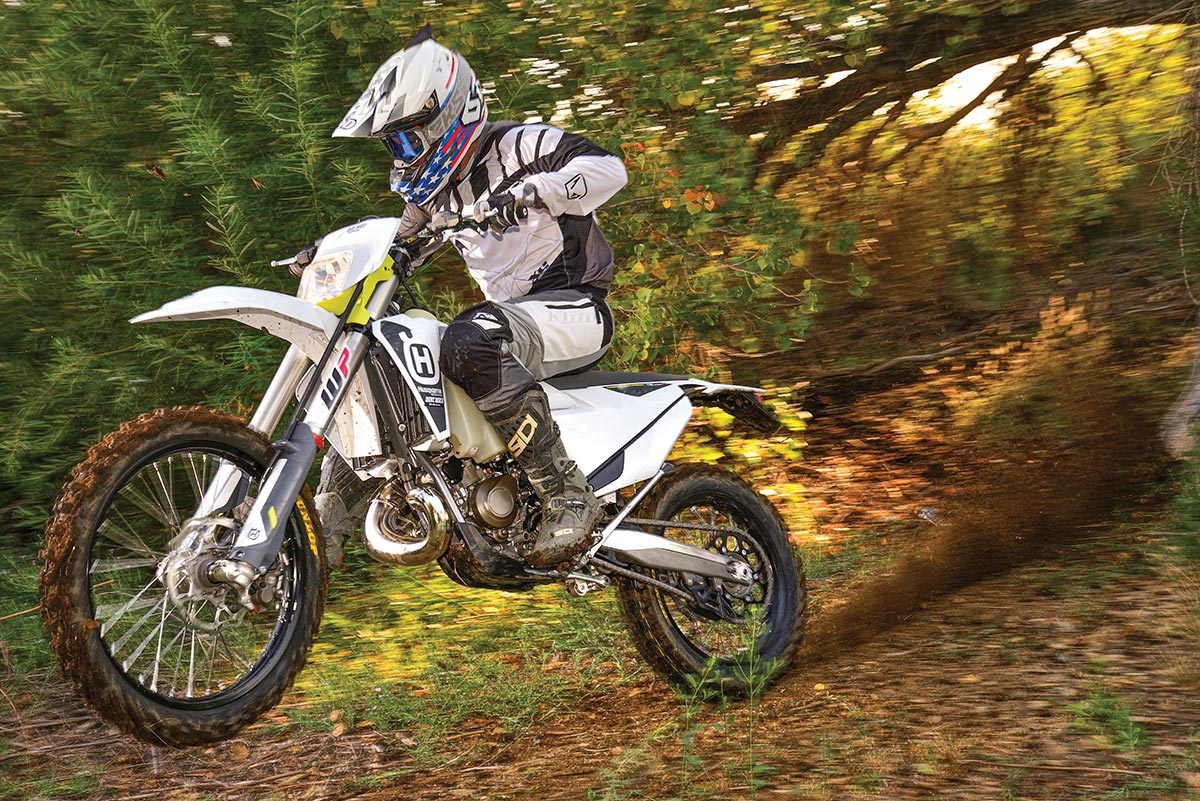 UNIVERSAL APPEAL
The reason that the TE150i has such broad appeal for beginners and pros alike is because it’s one of the most forgiving dirt bikes ever. This is a honeymoon that never ends. Why? Let’s start with weight. On the DB scale, it weighs 219 pounds without fuel. We tested the bike back in 2019 before the coming of fuel injection, and there’s no doubt that TPI and oil injection added a few pounds, but when it’s all said and done, the bike is still insanely light. On top of that, it actually feels much lighter than any other 219-pound motorcycle we’ve ever ridden. You can toss the bike around like it’s exempt from the laws of dynamics and mass. Compared to a 250 four-stroke, the TE150i has fewer parts spinning at lower rpm. That means the invisible hand of gyroscopic force has a much looser grip. In other words, it turns. Boy, does it turn.

This won’t surprise anyone with time on a 125 two-stroke. The TE goes a step further than that because it has much more gradual power delivery, and that allows you to pull through turns much more smoothly. You can roll on the gas without all the extraneous clutch work usually required by 125s. That’s even true compared to the KTM 150SX—another member of the aforementioned Austrian family. That bike is a completely different animal. Between tuning, mapping and the fuel-injection system, the TE150i is far smoother and much easier to ride. It hits more gently, revs slower and tops out sooner. As it turns out, TPI is naturally suited for small-displacement off-road bikes. The biggest criticism of the system is that it historically results in a powerband that is too linear and boring. No one can say that about the TE150i. The fact that it’s more linear than the carbureted 150 is a good thing. In terms of power, the 150 can surprisingly hold its own against bigger bikes. It makes about as much horsepower as a 250 two-stroke from the ’90s. The powerband is narrower, of course, but the motor spins so freely and the clutch is so easy that the 150 is on more or less equal footing on 90 percent of the trails you’ll come across. Fuel injection also eliminates that off-the-pipe bog that was common on small two-strokes back in the day. Another benefit of injection is range. The TE has a 2.25-gallon fuel tank, which is good for over 40 miles. When you ride a revvy small bore, you think you’re burning gas like a missile, but, in fact, the TE150i is a fuel sipper.

LITTLE VS. BIG
The real debate revolves around how well the 150 compares to a modern 250 or 300 two-stroke. This was never an issue in the past because the price difference was so great. Not anymore. The 2022 TE150i sells for $9199. A KTM 300 is only 14 percent higher. Once you add electric start and fuel injection, there really isn’t that much difference in the manufacturing cost of the two bikes. Is the 150 so good it can compete with the undisputed off-road champion? Maybe. In outright handling, the 150 is still the king, if by only a small amount. A TE300i is 15 pounds heavier and has all those invisible forces at play. And, while both bikes are a little under-suspended for fast trail riding, it’s more forgivable for the 150. The XPLOR fork is purposely designed for speeds you typically find on tight trails—first- and second-gear stuff. The 150’s lighter weight allows it to operate at a faster pace without leaving your comfort zone. But, horsepower is horsepower. A 300 can climb bigger hills and permits lazier shifting habits. Bigger, heavier riders on steeper, more horsepower-intensive terrain will doubtlessly continue to love their 300s. Smaller, lighter riders will enjoy the 150 more. Where’s the boundary between the two camps? Actually, it’s not a boundary as much as a broad overlap. And, it’s wide enough to include most of the off-road riders in America. 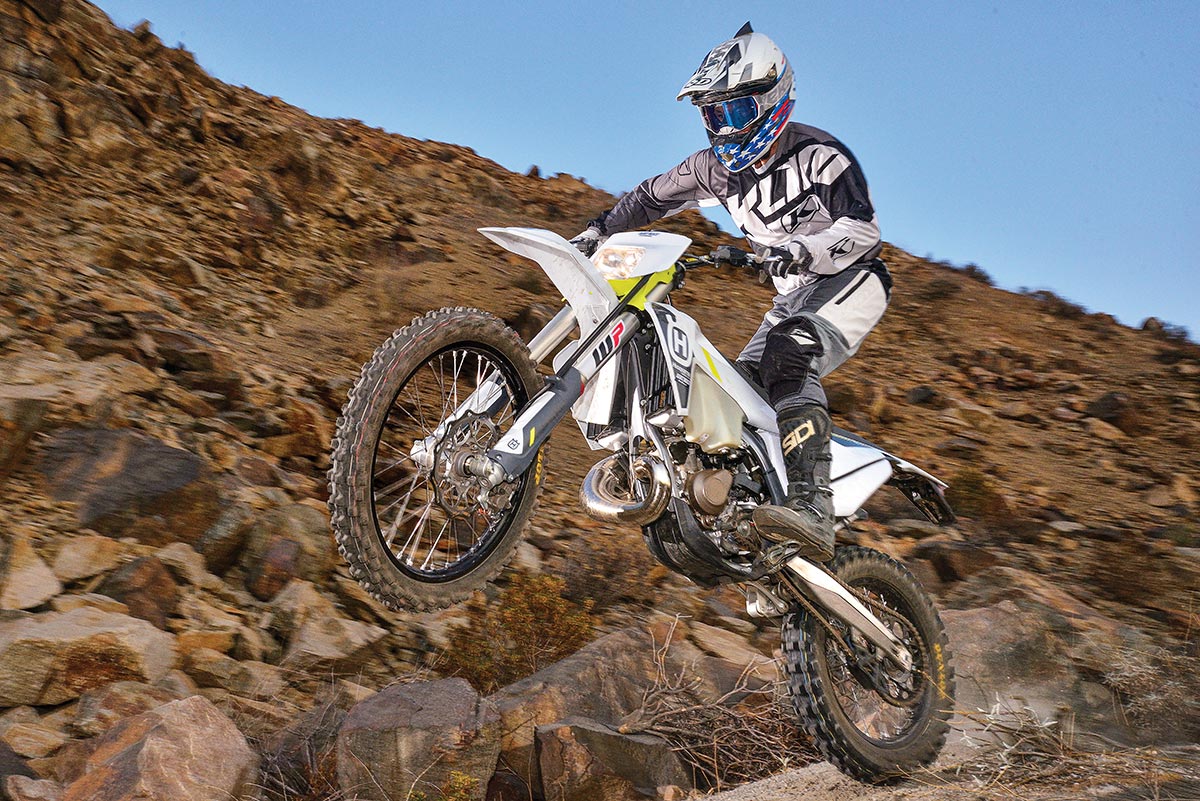