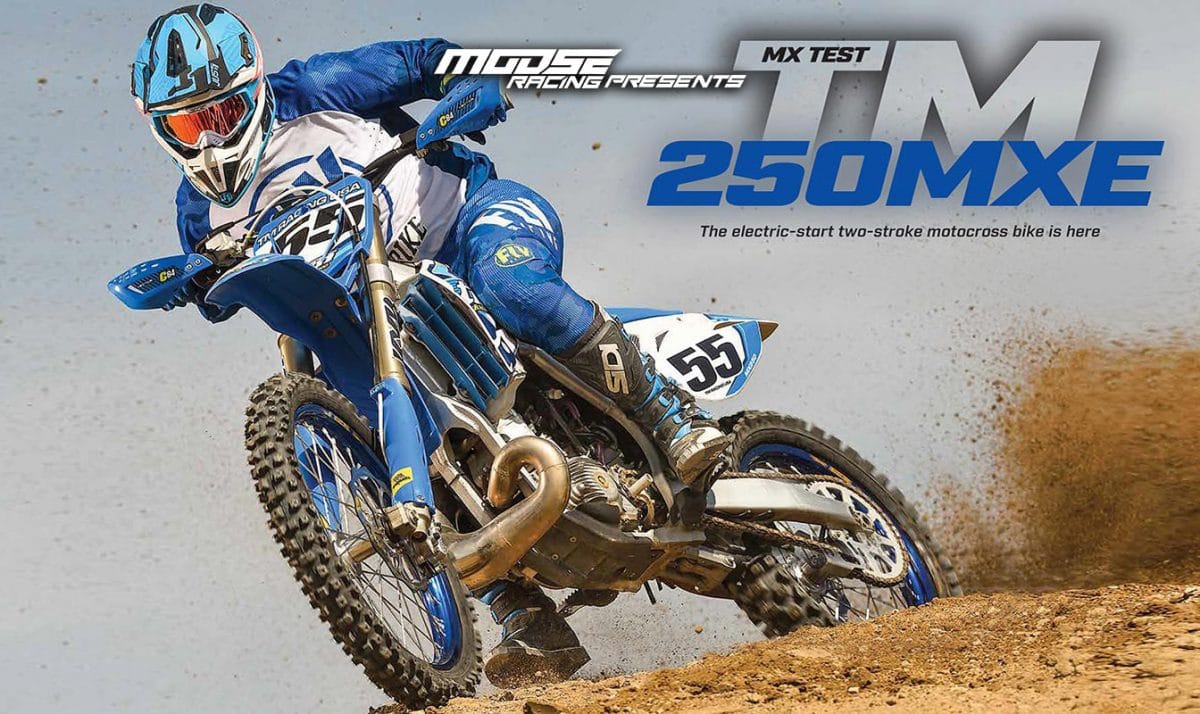 As the dirt bike industry is distilled to its most essential components, we increasingly look to small companies for innovation and purity. TM is a small Italian company making motorcycles that matter; motorcycles like the 250MXE two-stroke. This is currently the only electric-start two-stroke motocross bike available in the U.S. Beyond that, it’s a new two-stroke in an age where most manufacturers have lost interest in such things. Admittedly, the sales of the TM won’t threaten KTM or the Japanese manufacturers, but we guarantee that all of those guys are looking at it, thinking about it and adjusting their game plan because of it.

TM GENEALOGY
Part of the appeal of a small Italian company is the fact that it’s exotic and exclusive. The role that TM traditionally plays is somewhat Ferrari-like. The workmanship is beautiful, and the overall vibe is that it’s hand-made as opposed to assembly-line manufactured. The sand-cast engine cases are a big part of that, as well as the CNC-machined triple clamps and hubs. Two-strokes are still a very big part of the company’s battle plan. Even though TM has fuel-injected four-strokes, the U.S. importer has a much better response with two-strokes, going all the way down to the 85. The latest 250 is an interesting mix of new technology and old-school fundamentals. The motor was redesigned from scratch last year. It now has a counterbalance shaft and electric start. It already had a digital electronic power valve. It doesn’t have transfer-port fuel injection, however. TM is the only company outside of the KTM/Husqvarna group with that technology, but this particular model has a Keihin carburetor. The electric start is integrated in the cases. Even with the starter and battery, the bike is reasonably light. On our scale, it weighs 225 pounds without fuel. For a comparison, the Husqvarna TC250 two-stroke motocrosser is 215 pounds. It has no e-start, no battery and no TPI fuel injection. The TM still has a kick-start lever.

TM is one of the only European manufacturers that has embraced the perimeter aluminum frame. KTM, Husqvarna, Beta, Sherco and Gas Gas have all stuck with steel frames, whereas TM went aluminum over 15 years ago. Unlike Japanese frames, however, the TM’s is hand-welded. If you look closely at any Japanese frame, there are a number of blob-like robot welds. These are generally hidden, whereas the obvious welds are much more attractive. All the welds on the 250MXE are perfect. Standard stuff includes a hydraulic clutch, an A/B map switch and Excel  rims. The hubs and even the rear shock are beautifully made in-house by TM. Almost all of the components are from mainstream makers. It has a KYB fork, Nissin brakes and Bridgestone tires. Our test bike came with a Pro Circuit pipe, which is an option from TM’s U.S. distributor.

PUT IT IN GEAR  AND GO

We tested the TM 250 two-stroke enduro bike much earlier in the year. This is a similar machine, although it has a different gearbox, stiffer suspension and is in a different state of tune—and, of course, that bike was fuel-injected. To us, this bike is unlike most other TM motorcycles we’ve ridden. We have a long history with the company, going back to the first ones imported to the U.S. 25 years ago. In general they were very fast, hard-hitting motorcycles; great for pros, but not very forgiving for novices. This one is different. The motor has a smooth, gentle power delivery. It almost feels like an enduro bike. It’s not slow, though. We have several other 250 two-stroke motocross bikes in the fleet right now, and the TM can hang with any of them.

Previously, it seemed to us that TM would do whatever it took to have the biggest dyno number.
As a result, they usually struggled for traction, especially in dry, slippery conditions. The new version actually hooks up better than other modern two-stroke motocross bikes. The jetting is absolutely flawless, too. There are no hiccups or sputters at any throttle opening. The importer recommends race gas, although we cheated somewhat. We ran a 50/50 mix of race gas and pump gas and could tell no difference. We know finding a good source of race gas is a big burden to lay on the average rider. The company’s response is that these aren’t motorcycles for the average rider.

RIDE AND RACE
Another characteristic of TM motorcycles is a very stiff feel. Part of that is somewhat superficial because of stiff seat foam, but some also come from a rigid frame. All motorcycles have much more frame rigidity than they did 10 years ago, so it’s almost like the rest of the industry has come around to TM’s way of thinking. Advancements in suspension have enabled motorcycle makers to do this. The TM’s KYB fork is very good. We’ve heard that many of the internals are similar to those of a Yamaha KYB fork, but without disassembling it and measuring ports and shims, we can’t verify that. It has its own feel, providing a lot of feedback, but not necessarily in a bad way. You never get any sharp spikes, and the overall spring rate seems about right for a 175-pound intermediate rider. The TM-made shock has a very different feel. It has a very dead, somewhat over-damped feel, making the rider feel insulated from the track. Again, this isn’t necessarily a bad thing, but it’s distinctive. Once you get used to it, you learn to like it, but it might take a ride or two.
As far as overall handling, the TM has a long, stable feel. You can still cut and thrust on tight tracks because of the bike’s relative light weight. If you divided the world into two different camps; with Yamaha-like cruisers on one side and Honda-like dancers on the other, the TM would definitely fall on the Yamaha side. 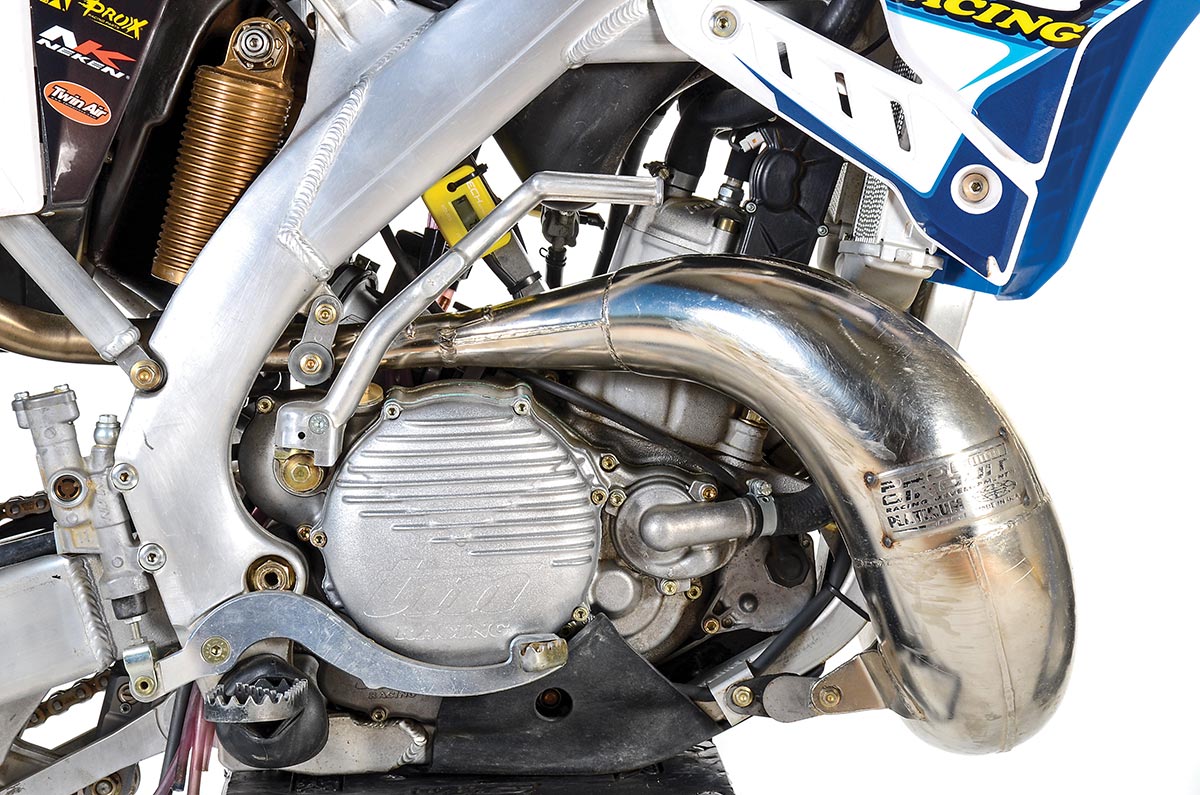 WHERE WE GO
In the past, the bike’s biggest hurdle was its price. In this area, too, the rest of the industry has caught up with TM. The TM 250MX is $9,195. KTM’s electric-start 250XC two-stroke is higher—$9,799. Husqvarna doesn’t have an electric-start 250 two-stroke for racing MX, but the TX300i sells for $10,099. If you don’t need electric start, bikes are considerably less expensive, starting with the Yamaha YZ250 at $7,499.
In light of that, the TM can’t really be considered Ferrari-exotic anymore. It’s now a small company that’s done a remarkable job of going toe to toe with giants. Your local dealer won’t offer a TM as an alternative to more mainstream hardware. You have to research it, find it and want it.