MODERN-DAY KTM 200 2-STROKE: BEHIND THE BUILD 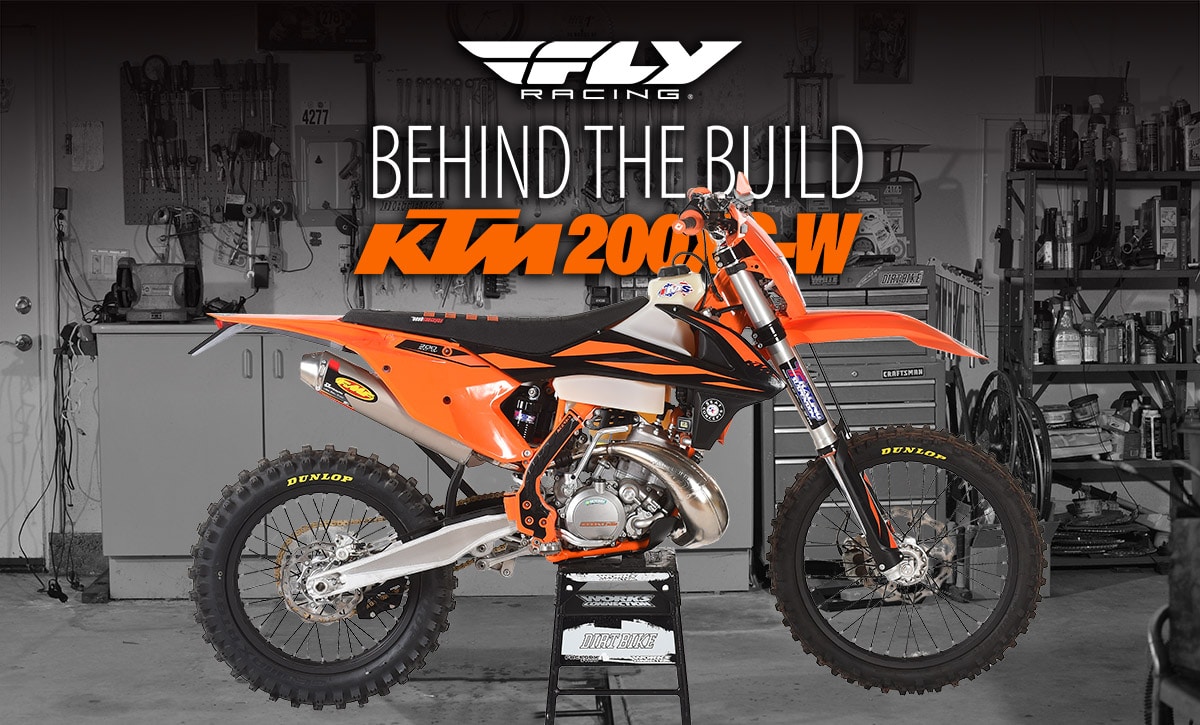 The 200cc KTM has a very devoted cult-like following, and the fact that KTM stopped production of this model back in 2016 just fuels the fire of desire for some. Lendon Smith and Robert Lightfeldt, owners of Seat Concepts in Idaho, are two such people. They decided to take matters into their own hands by building a modern KTM 200XC-W. 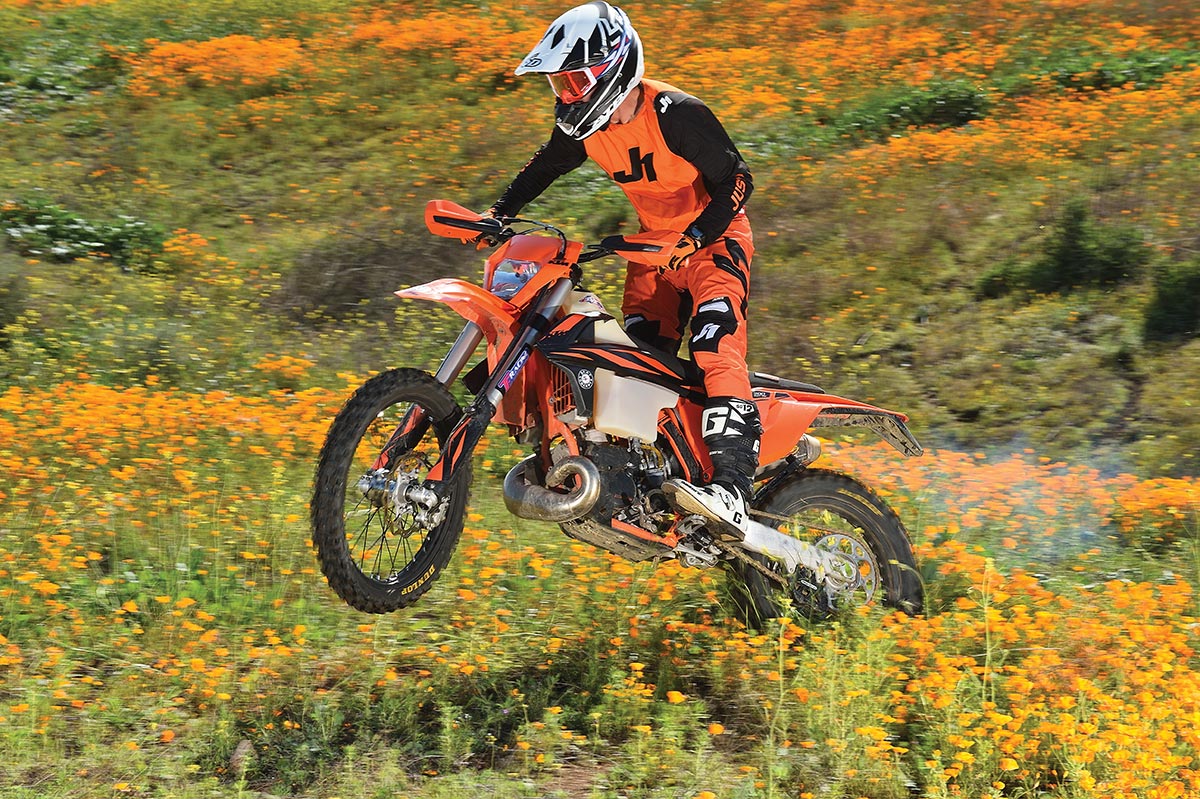 First things first: Lendon and Robert wanted this bike to look like it just came off KTM’s factory assembly line in Mattighofen Austria. No bling here, just what appears to be a factory-made product.

Most builds like this start out with two complete used bikes being morphed into one unit with a lot of leftover parts when the dust clears. Not this one. The Seat Concepts KTM 200 rolled off the assembly line as a 2017 125SX model that, believe it or not, was supposed to be for Lendon’s teenage daughter. Let’s just say that didn’t happen. Rather than looking around for a used KTM 200 complete bike and harvesting the engine, Lendon decided to see if it was possible to find a brand-new engine that he could just drop into his 125SX chassis. Talk about trying to find a needle in a haystack. His prayers were answered, though. On a chance phone call to the crew at Solid Performance KTM, it was discovered that they had a brand-new complete engine assembly with electronics for a 2016 KTM 200 just sitting on the shelf. It wasn’t cheap by any means, but it was exactly what the Seat Concepts crew needed. Now all they needed was a carburetor to feed the new powerplant. A Lectron 38H-series carburetor would do that job. Finding a complete, brand-new 200cc engine is almost a miracle, but then add in the fact that it’s a 2016 model year that came equipped with an electric start, and that’s a parting-the-Red-Sea-type miracle.

With the engine getting squared away so quickly, it was time to focus on the chassis. They were hoping that this build might require less modification, since the bike already housed a two-stroke engine initially (not a four-stroke)—just a smaller cc. The best-case scenario would be to move some engine mounts around and—bam—off to hit the trail. Unfortunately, that was definitely not the case. The entire engine cradle had to be replaced with new lower engine-mount locations to make room for the lager expansion chamber and electric-starter assembly. The engine headstay also had to be reconfigured, but the OEM 125SX air boot and air-box assembly fit perfect. Robert just had to mount an XC-W battery tray inside to power the new electric-start motor. Once the major frame modifications were complete, the task of making this SX transfer into an XC-W trail-worthy model started.

This was done using OEM and aftermarket parts in some targeted areas. The best part about KTM using essentially the same platform for all the two-stroke models is with minor modifications the OEM parts will fit on a wide variety of machinery. The OEM front fender, headlight assembly and handguards off an XC-W model were used, along with the rear fender brace. The 19-inch OEM SX rear rim was replaced with an 18-inch rim, and Dunlop AT81 tires were installed for off-road use. This is the combination that comes stock on all current KTM off-road models. As we said before, aftermarket items were also used on this build—just not in overwhelming fashion. A larger IMS tank was installed, giving around double the fuel capacity as the OEM SX model, as well as IMS core pegs that are slightly larger overall and feature a more aggressive tooth pattern. A black TM Designworks rear chainguide, sliders and rollers replaced the OEM parts for improved durability, but still retained that off-the-showroom-floor feeling. The only internal engine modification done was some headwork performed by Kelsey Manning at RK Tek. The Seat Concepts KTM 200 received an upgrade in the performance department via an FMF Gnarly pipe and Q Stealth silencer. The build was topped off with OEM graphics, a complete Seat Concepts black gripper seat with orange ribs, and a Pro Moto billet-aluminum kickstand to complete its off-road transformation.

Is it as good as the bike KTM was producing before production stopped? No. It’s better! Tom Flemming from TF Racing did amazing things with the suspension. The WP 4CS fork now utilizes a Dal Soggio Ray system for its internal components, teamed with a custom valving and spring combination that works flawlessly. All the targeted changes made with aftermarket products from IMS, FMF, Lectron, TM Designworks, Pro Moto Billet and Seat Concepts enhance the machine’s performance on the trail just like they are supposed to. We do have one major problem with this build, however, and that is that the crew at Seat Concepts is expecting us to give this bike back, but no one on staff who has tested the bike is willing to do that! If you are one of those dedicated KTM 200 followers whom we referred to at the beginning of this story and you have some extra cash, we highly recommend this type of conversion. The smiles on our staff members’ faces have not faded, and the bench-racing sessions are still going on months after we first tested the machine. 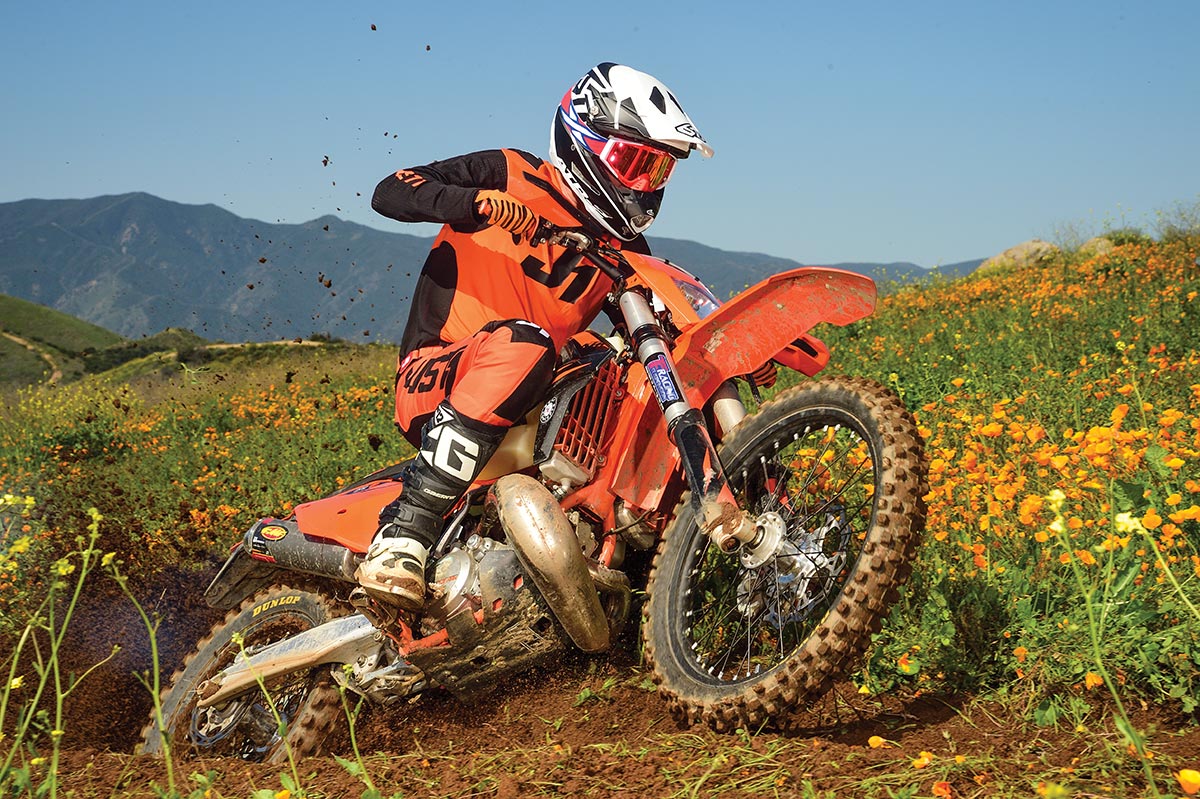