In January 2006 we ran a story on riding the most fearsome off-road race bike ever built: The KTM 950 Rally. By then it was already banned by ASO, the organizers of the Dakar Rally. The bike was made famous by Fabrizio Meoni, one of the few men to master it. Paul Krause was another, and he helped us with the following story.

For the record, 500-pound dirt bikes were never a good idea. It was never especially practical to take twin-cylinder, 100-horsepower, 1000cc motorcycles off road. But back in 1981, Hubert Auriol won the Paris Dakar on a BMW Twin, and for the next 20 years, everything went crazy. BMW, Yamaha, Cagiva, Honda and KTM all built special works bike that were capable of cruising at 120 mph for days on end. The race became more and more infamous.
It all came to an end in 2004, which was the last year to allow twin-cylinder bikes. In a fit of sobriety, the organizers restricted the ’05 event to smaller, slower bikes. Tighter routes had already been in place for several years, allowing single cylinder bikes to be competitive. And more restrictions on speed and fuel capacity were in store for the 2006 race. For better or worse, an era had come to an end.

In that last year of unlimited race bikes, there were only two Twins entered in the Dakar, one ridden by Fabrizio Meoni and another by American Paul Krause. I began wondering, what ever happened to those bikes? Were they crushed? Did they go to a museum? Are they just so scary that no one has ridden them since? So I asked Paul.
“My bike is here in the ‘States,” he said. “It’s just sitting in the warehouse at KTM in Temecula. It’s one of a kind and there aren’t any parts available, so it doesn’t get ridden at all. Shame.”
It was true. I saw the bike a few days later when I was at KTM for other business. It’s truly special. It has a 950cc V-Twin motor that isn’t that different from the production 950. But it has a special frame, works suspension, 20 gallons of fuel capacity and a cockpit you wouldn’t believe. It looked worn and a little tattered–it had been through a month of war in North Africa. But there was underlying aura that was unmistakable. It was exotic and it was expensive. And it was the only one in this hemisphere. I had to at least ask, even if I disguised it as a joke: “So do I have to enter Paris Dakar to ride this thing?”
Scot Harden smiled. “They won’t let you ride it at Dakar anymore,” he said. Then there was a long pause. “But maybe we can work something out.”

Two weeks later I got my chance. Scot and Casey Folks were organizing the Nevada Rally Experience, which is an event designed for crazy, big bikes. See, you just can’t ride a bike like the big KTM 950 on the trails we normally visit. The bike is twice as large, so the trail has to be twice as large. Everything has to be scaled up. Scot knows this, so his rally is 90 percent roads and two-tracks.
It was my chance to be one of the only men in America to ride the last of the dreadnaughts. But I can’t say I was really looking forward to it. Just getting on the bike was intimidating. It has an absurd seat height. I’m over six-feet tall and I needed help climbing on board. Gary Jones braced the bike while I got a running and leaped up like Dale Evans. The roll-chart holder still had the last day of Dakar ’04. I carefully removed it and stashed it in my gearbag, then loaded the Nevada road book.
Starting the bike was interesting. There were petcocks all over the place connecting the two rear tanks with both sides of the main tank. I chose one. Then I flipped on the main power toggle and found what looked like a starter button. The 950 fired up instantly, but it sounded like nothing in the dirt bike world. The two Akrapovic pipes sounded like a Trophy truck. It was a gut-shaking snarl at idle and it revved like lightening. I was concerned.

Paul Krause rode the Paris Dakar rally twice. Back in 1998 he cut deals and worked like a fiend to put his first ride together. It wasn’t easy. At the time he was a Team Green rider and KTM was the only manufacturer that really supported the Rally. He had to write special contracts and enlist unheard-of cooperation between Kawasaki and KTM to make it happen, but he was determined. To him, Dakar was the ultimate off-road race. He had been to the ISDE, he had won Baja and he had won National Hare and Hounds, but he was obsessed to cap it all off with Dakar. The first year, he would learn. After that, he would return and really race.
But returning was harder than he thought. Between his family business, his kids and his life, he didn’t return for years. And in the meantime, everything changed. “When I first went over, you could ride at 80 percent and still stay with the leaders. You had a cushion for safety. But in 2004, that cushion was gone. They were really racing. Meoni rode his 950 like it was a 125. He would just pin it over blind dunes. It was crazy.”
In Paul’s first year he was on a single and the race was fast and semi straight. It was still the exclusive property of big Twins in the hands of factory riders like Stephane Peterhansel. In 2004 the organizers had already taken steps to make the race slower. That meant more twists and turns and the 950’s awesome speed and power were useless. Still, Paul struggled to ride the big bike the best he could. “My hat goes off to Paul,” said Larry Roeseler, who rode in ’04 on a single. “I can’t imagine riding that thing day after day. The single was tough enough.” 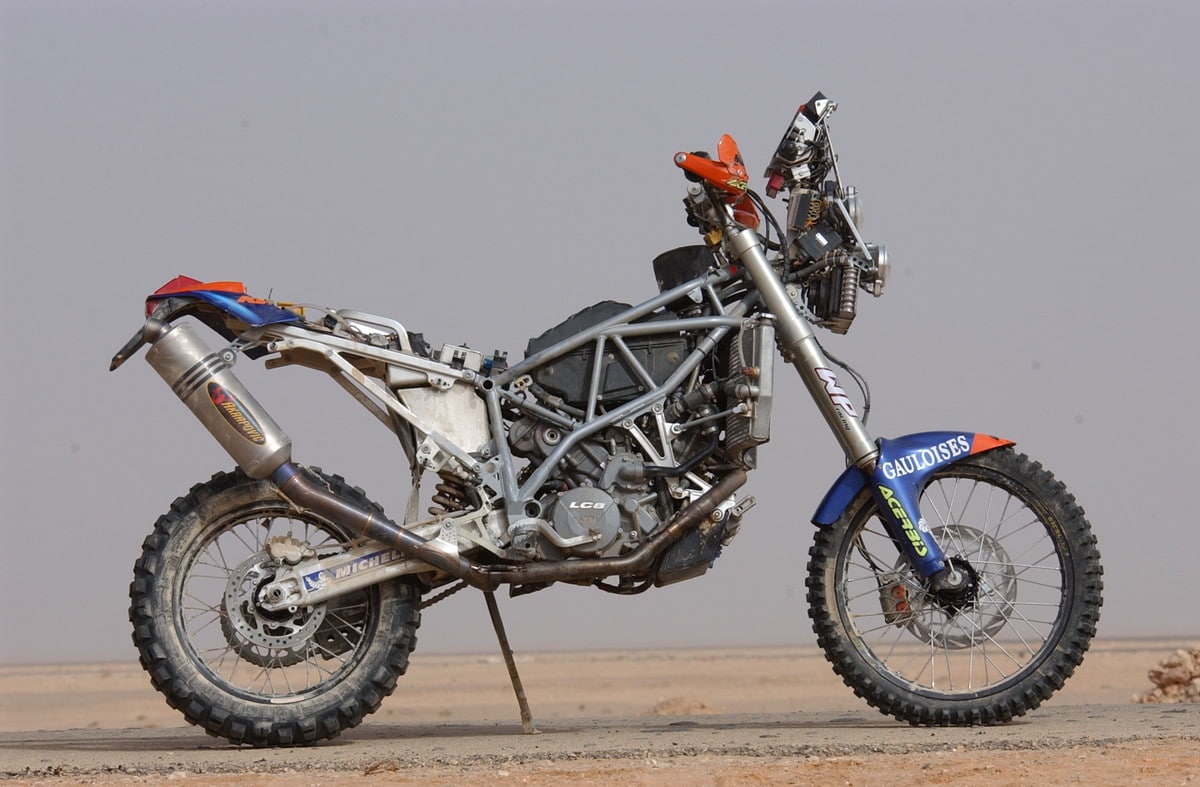 Riding the 950 in Nevada was all about planning. You just couldn’t stop anywhere. You had to look for a low spot and plan where you would place your feet. If you stopped in the wrong place, you would have to lean the bike to the point of no return, just to reach the ground. “We practiced picking the bike up,” said Paul. “But picking the bike up in a parking lot isn’t the same as picking it up in a sand dune after falling down. I only really crashed it once, and I was lucky not to get hurt. Once I got the bike upright, I had to sit and catch my breath for some time.”
Thankfully, I never dropped the 950. But I certainly tried. When you have that much power on hand and when you have a bike that sounds that cool, it’s irresistible; you just have  to open the throttle sometimes. And no matter how straight the dirt road is or how much space you think you have, it all disappears fast at 120 mph. The widest road in the desert suddenly becomes a tight single track. It was a battle between conflicting drives. I had  to twist that throttle. But I wanted to survive.
And just to be ornery, Scot and Casey threw in some real single track. Part of the event was in a rocky sand wash. I never would have noticed if I was riding, say, a KTM 525. Even a Honda XR650 would have been a breeze. But on the 950 the only thoughts were to keep moving and stay up. After Paul made it all the way though Dakar without scratching the bike, I didn’t want to wad it up on my first try. 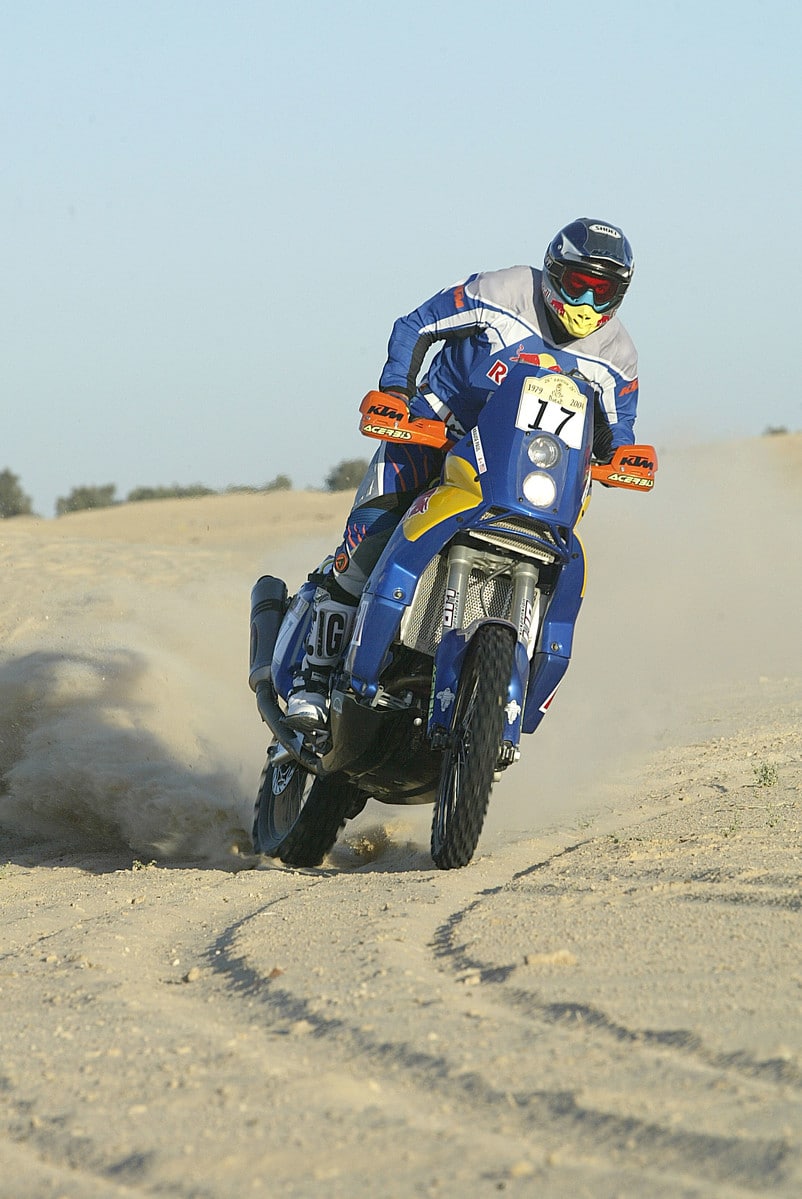 Oddly enough, after three days of riding the 950 it became normal. We all adapt. If I never grew an inch after my third birthday, maybe all bikes would seem like this. I just got used to getting a running leap to climb on the bike, I got used to stopping in spots were I could touch the ground, I got used to needing a square mile or two to turn around. It was a blast. But the key to riding the bike was that I didn’t have to. I could go as slow as I wanted. Or I could just stop and have lunch on the trail. I didn’t have to charge at full speed for 500 miles. And I didn’t have to sleep on the ground next to a generator. And I didn’t have to repeat again and again for a month straight. Riding such a big bike is absolutely great fun, I decided. As long as you can do it in small doses.

EXTREME HUSQVARNA 300 2-STROKE: BEHIND THE BUILD