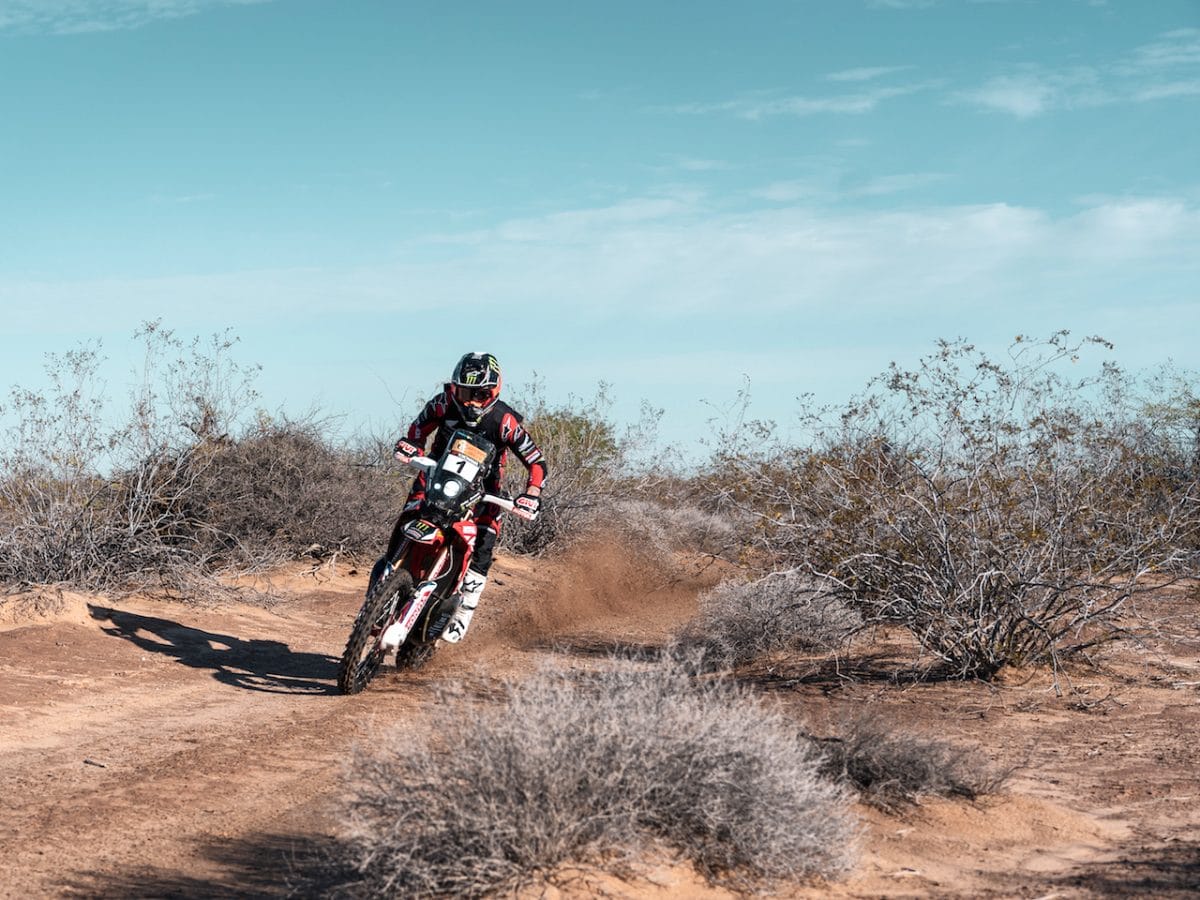 Moto Pro, Privateer Skyler Howes (2), who had been at the top of the scoreboard most of the week, won Second Place in the round and overall. He described the first section through flood plains as “very fast, and, actually, pretty flooded” after all of the recent storms.

“The navigation was already tricky in those areas because there are so many trails to choose from. Then, adding in all the small bodies of water and mud made things extra exciting!”-Skyler Howes

The next part slowed things down, just a tad, as the fight entered the sand. Low and still fairly quick, the washy expanse soon grew to enormous heights, taking this struggle to the “big dune.” Unlike many perfect training grounds around the world, North America seems to have a real shortage of Dakar-style, pee-your-pants at the crest, dunes… Except in the Altar Desert. Here not only are the sands tall, but they expand a vast amount of countryside covering much of the upper most parts of Sonora. Ricky Brabec (1) was leading out the ride, and even encountering a mishap with barbed wire later in the stage, he secured a solid victory ahead of Howes, his worthiest of opponents. There’s film footage of the 2020 Dakar Rally champ slicing across a steep wedge of beach precariously dabbing at the ground to stay upright. “He was going full gas and nailed the navigation, which is really hard to do, so I’m super impressed,” Howes said of Brabec. “I’m just glad I could keep the pressure on and make a race out of it!”

“2020 Sonora Rally was really great for me, the team, Honda, Monster – everyone. Personally, I like this event after Dakar. [It] kind of puts you in the spot, seeing where you’re at as far as speed, navigation… And it’s just great to be here learning and always improving. Personally, the event is really nice. It allows a lot of people to feel the rally experience and kind of get a taste of what the Dakar would be like. You know, this rally is a little bit more laid back, with a little bit later start times, so it makes it really, really fun! It’s a family style event in my opinion. You get to ride all day, hanging out with everyone, no stress, and…that’s something I really look forward to coming off the Dakar – not going directly into training. Now that this is said and done, we’re going to go back home and figure out where we slacked, then work on that. Better ourselves for the next Dakar Rally. Obviously, I’m going to be back for the next Sonora Rally schools, and we’ll be back for 2021 Sonora Rally, hopefully, more people will also come and enjoy the experience. I know next year I’ll have a teammate or two joining. Unfortunately, this year, had the Coronavirus, and a lot of people stayed home. But it is pretty cool being here, and it (the Sonora Rally) being the only real event going on in the world right now – especially in motorsports.” – Moto Pro 1st Place Winner, HRC Factory Rider, Ricky Brabec (1)

Brabec and Howes aren’t the only riders to have an incredible race. Dakar and Sonora Rally vet, Bill Conger (9), just wanted to beat “the other old guy” in the running and outdid himself by landing himself the 3rd step in the championship. “It was a great rally. [I] rode solid for four days. The fifth day was rough (I ate shit big time). And Stage Three I survived getting stuck in barbed wire…” yet his skill, quick wit and determination put him not only in front of another “old guy” but the rest of the pack. All the while, Moto Pro rookie Mason Klein (11) kept a tight grip on Third in Class for a fourth day in a row. Had he not made a mistake which cost him 6 hours on Monday, it would likely be him in the Winner’s Circle. But maybe that’s the difference between generations – the learned versus those yet to be learned. And this week, Klein learned a lot. “I had an amazing time at my first rally. I’ve been looking forward to this event all year. It’s awesome to chase the best in this sport!” He took his mistakes in stride and thanked the rally for “putting on an epic event.” But next year, we have a feeling be coming back with newly acquired knowledge which could put him up against the best of them. Wes VanNieuenhuise (5) was also quite a sight to behold. Known in the off-road motorsports circuit for his graceful command of the monster sized ADV bikes – for suitable for a road trip with your Butler Maps – made a tremendous display in the contest. Supported by Rottweiler Performance and Cyclops ADV, VanNieuenhuise sealed the deal on a KTM 790 concluding the week 1st in the Adventure Class, 5th in the stage and 4th overall.

Baja veteran, Colton Udall (4) gave hell to the Pro class, and even without clinching victory in the General Standing, he won the coveted Road to Dakar event, giving him the opportunity to enter the notorious Dakar Rally in 2021, for free! 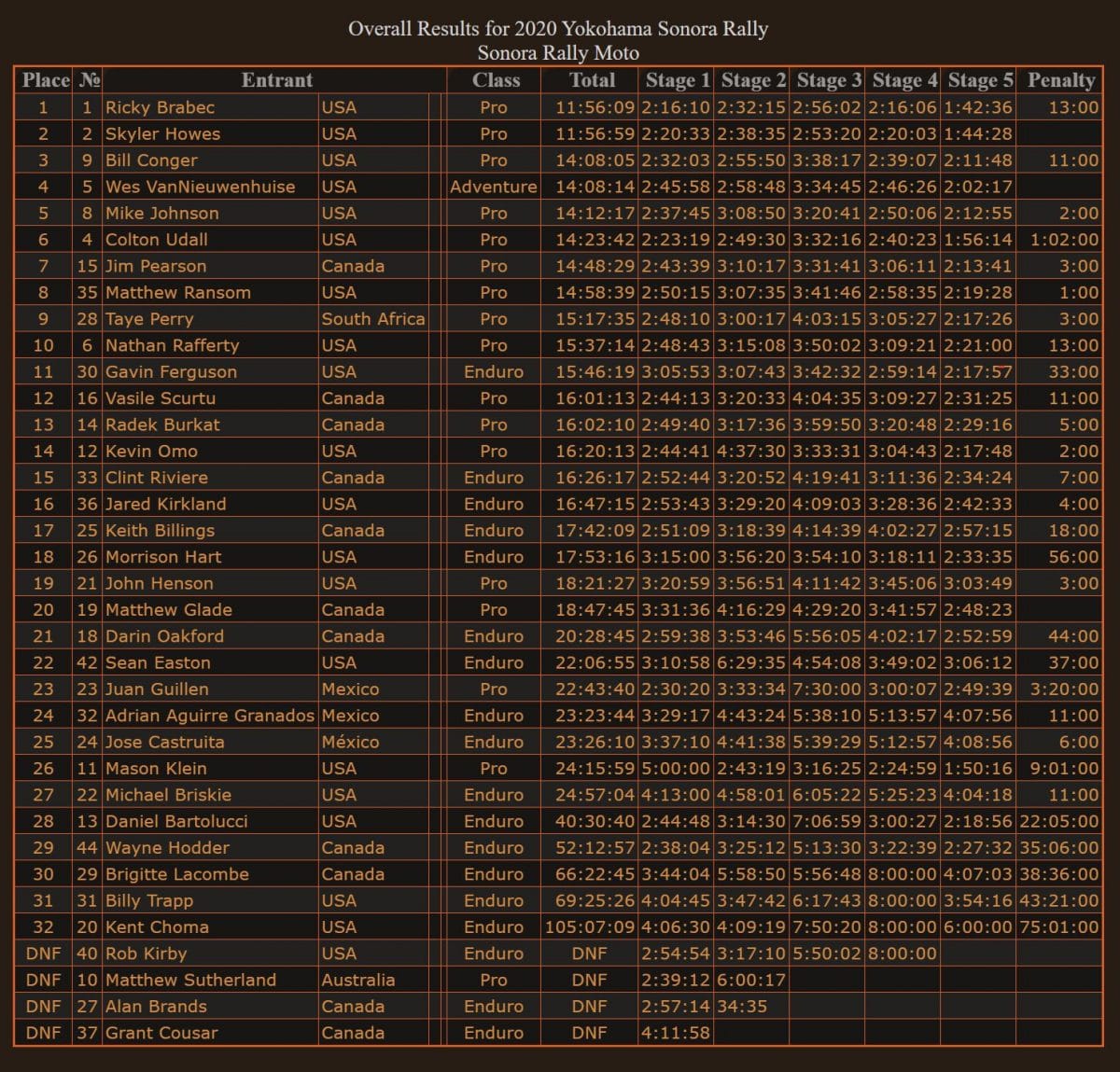 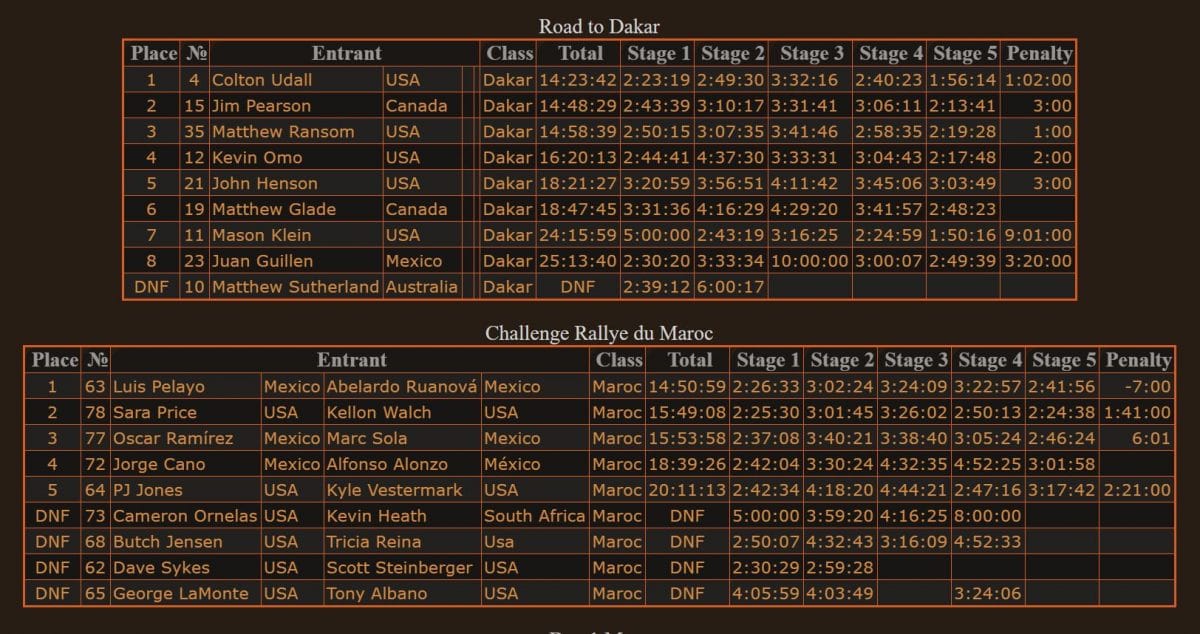