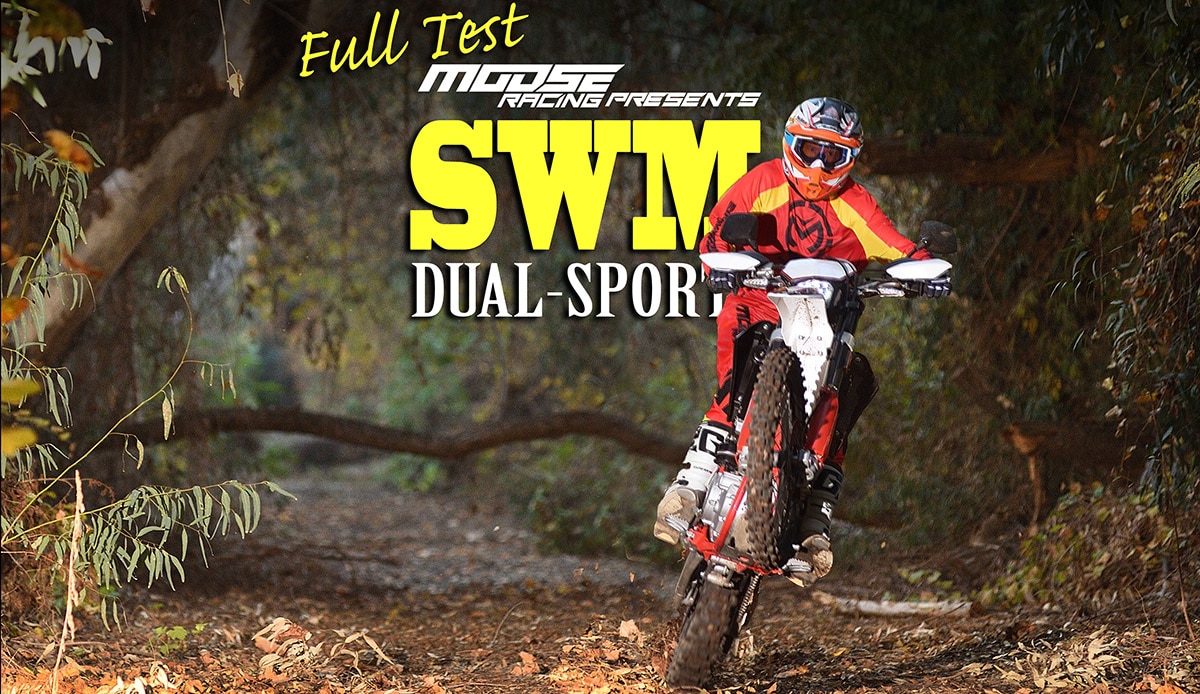 SWM RS500: A NEW TWIST ON A FAMILIAR DUAL-SPORT BIKE

Forgotten fact: the first shot in the dual-sport revolution wasn’t fired by KTM, Honda or Beta. The first of the hardcore, dirt-oriented, dual-sport bikes was an ancestor of this bike: the SWM RS500. Only it wasn’t called an SWM at the time. Back in 2006 it was the Husqvarna TE510. This was the Italian incarnation of Husqvarna, before KTM ownership (2013 to present) and before BMW ownership (2007 to 2013). In 2013, Husky production was moved to Austria, leaving a fairly modern factory near Varese, Italy dormant. Former executives from Cagiva and Asian investors acquired the factory as well as all the tooling and the intellectual rights to the older Husqvarna designs. The result was SWM. Now, after a lengthy homologation process, that first serious dual-sport bike is back in the U.S., updated, renamed and relaunched. The good part is that because existing tooling was used, the price is thousands lower than comparable dual-sport bikes.

Old timers might remember the SWM name from the ’70s and ’80s. There was an Italian company by that name that disappeared over 30 years ago. This new company is unrelated to the original, but the name has some value to riders in Europe, so it was resurrected. The RS500 is the first of several models to pass American EPA and DOT tests. The bike itself is heavily modernized, but it is instantly recognizable to anyone familiar with 2000-era Husqvarnas. The double-overhead-cam motor has the same look and many of the same parts. Within the motor, many parts had to be resourced or updated. The piston, cams and Mikuni EFI system are all new. It still has a six-speed gearbox, a hydraulic clutch and the twin exhaust system that was introduced in the Husqvarna days. In order to pass noise and emission standards back in 2006, there were a number of weird compromises made that are now unnecessary. Back then, the bike came with a throttle stop that had to be removed by the buyer, and an electronic jumper was needed to access a workable EFI map. Those measures have been eliminated, but there’s still an oddly positioned charcoal canister hanging off the left side of the motor. It doesn’t affect performance in any way. The bike comes ready to ride.
Perhaps the most significant change from the old days is the suspension. The bike now has KYB components, front and rear. The Brembo brakes have been updated to the latest units, and the tires are DOT Michelins with the Euro-spec shortened knob height. The components that come on the bike are all topnotch.

We kind of expected the SWM to be a retro experience. Riding a brand-new, 13-year-old bike should be a blast from the past, right? Not really. It turns out that the SWM’s layout is more or less the same as that of any modern dirt bike. It has a comfortable rider compartment, and the bars, pegs and seat fall within millimeters of most current bikes’ specs. There’s nothing about the bike that feels dated at all. Even vibration is minimal–we don’t think it was this smooth back in the day. And the power is exactly what a 500cc dual-sport should have. It’s a little softer off the bottom than a KTM 500EXC or Honda CRF450L, but then it catches up. In the midrange, it’s stronger than either of those. As you might expect, it’s not as powerful as most of the closed-course, competition off-road bikes, such as the KTM 450XC, the Honda CRF450RX or the Yamaha YZ450FX, but that’s a good thing. As we’ve stated many times, those bikes are drastic overkill for trail riders. The SWM was never designed to be a race bike.
In order to pass EPA testing, the SWM’s EFI system is lean, just like any dual-sport bike’s. That rears its ugly head with occasional hard starting, and once in a while it will cough and die. As always, modifying the injection system to fix this is against the rules, but different states have different policies on enforcement. We already know that there are competition maps available in Europe that work flawlessly. Likewise, there are exhaust systems available from companies such as Arrow that eliminate the double mufflers, save weight and add substantial power—also a no-no by U.S. rules, but that doesn’t mean it won’t be done. 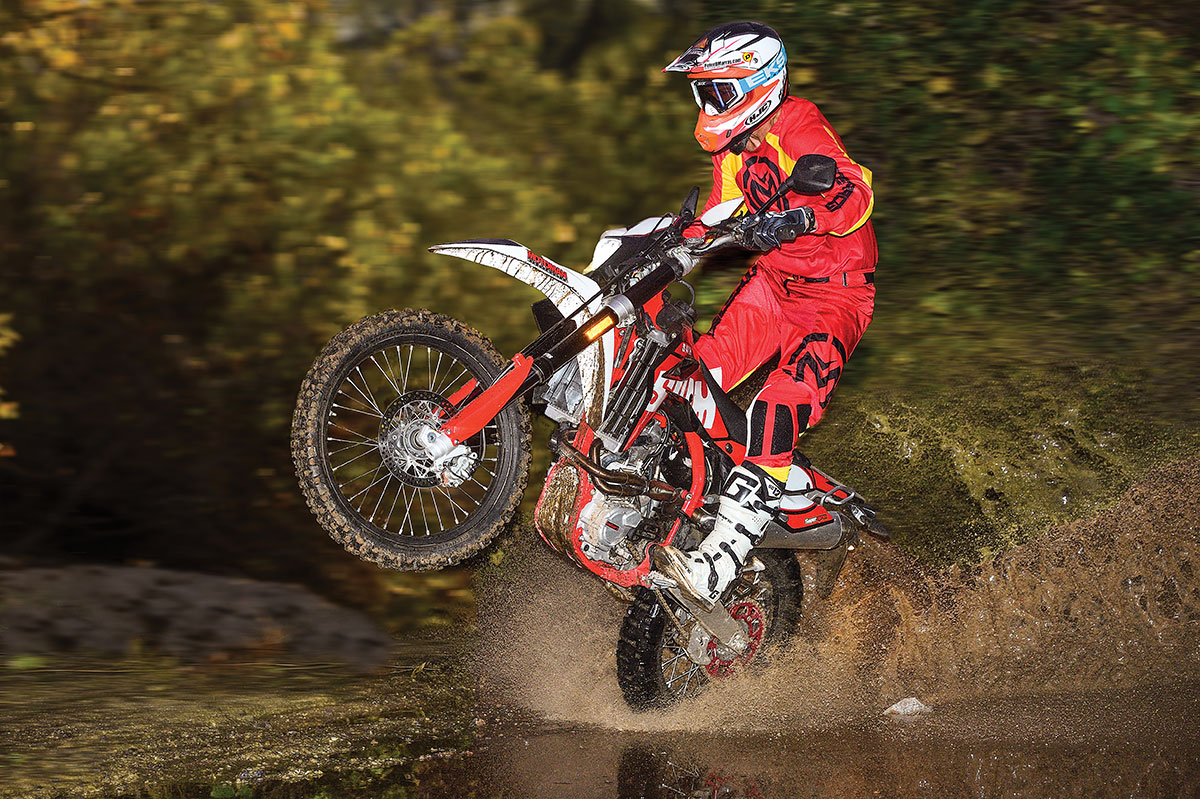 Back in the day, we loved the way the Italian Husqvarnas handled. That old feeling is still there. Ty Davis, Gary Sutherlin, Cory Graffunder and a long list of other American off-road heroes won a lot of races using this basic chassis. The bike’s ability to turn, they all agreed, was its strongest asset. It still is. Once the bike establishes itself in a corner, it more or less goes on autopilot and follows through without requiring much effort. In the old days, though, it took a lot of suspension work to make the bike handle as well in rough straights. Ty Davis immersed himself in the mysterious way of Marzocchi suspension components to find a solution. That’s not necessary now. Marzocchi is long gone, and the KYB fork and shock are anything but mysterious. The settings are soft, but overall the bike has a very plush ride without any of the instability that riders might remember from the Husky days. 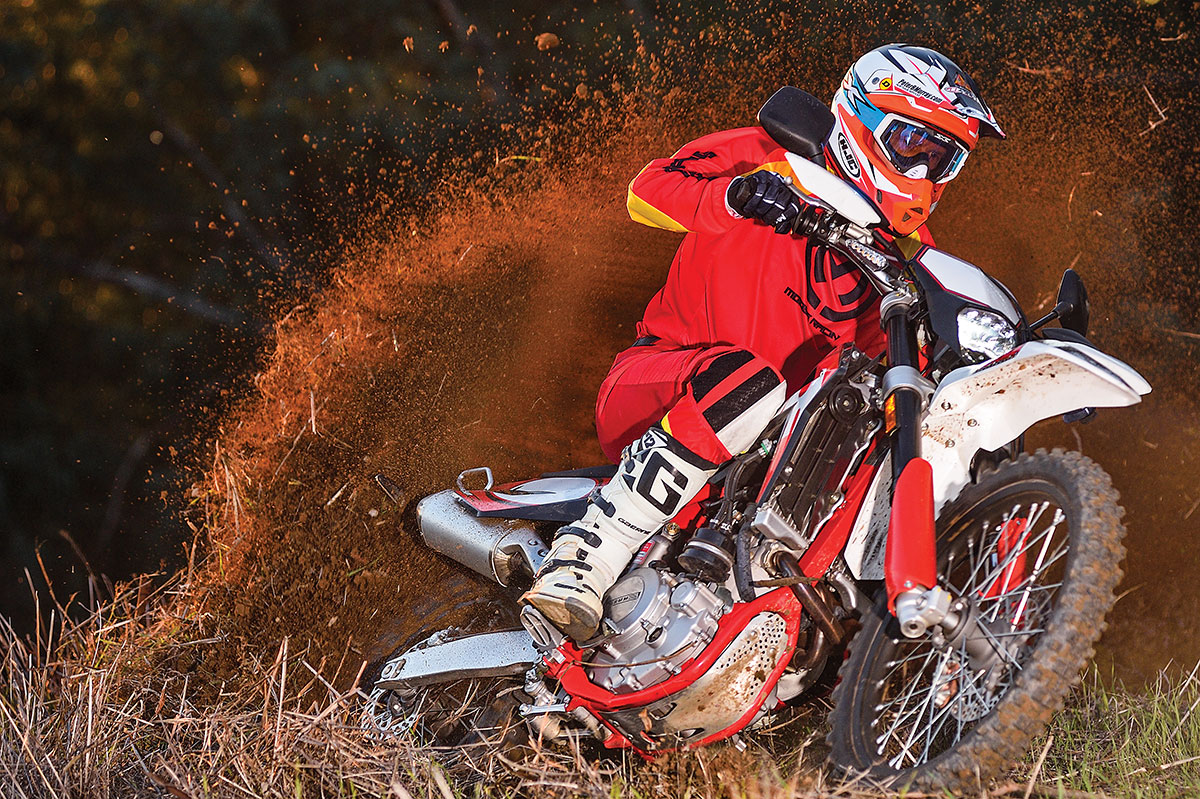 The one change that dramatically affects the bike’s handling in a negative way is its weight. Whether it was because of modern requirements or the transition to new ownership, the SWM is heavier than we expected. On the Dirt Bike scale, it weighs 285 pounds without fuel. That’s 8 pounds heavier than the 2019 Honda CRF450L, which has a weight issue of its own. We would like to say that the bike doesn’t feel that heavy, but in truth, you feel every pound. When you take the RS on tight trails, it takes a lot of muscle to force the bike around. It is a 500, too, and all the torque and flywheel add to the feeling of mass.
We think it would be easy to shed about 15 pounds. As we mentioned, there are single-sided mufflers available. There are also smaller mirrors and the usual dual-sport accessories to be had. SWM gave the bike some new stuff, including aluminum grab bars and a beefy tail section. These are nice features, but nice features come at a price in weight. No matter how many parts you remove, you won’t get it down to the weight of a current Husqvarna FE510, which is less than 250 pounds. 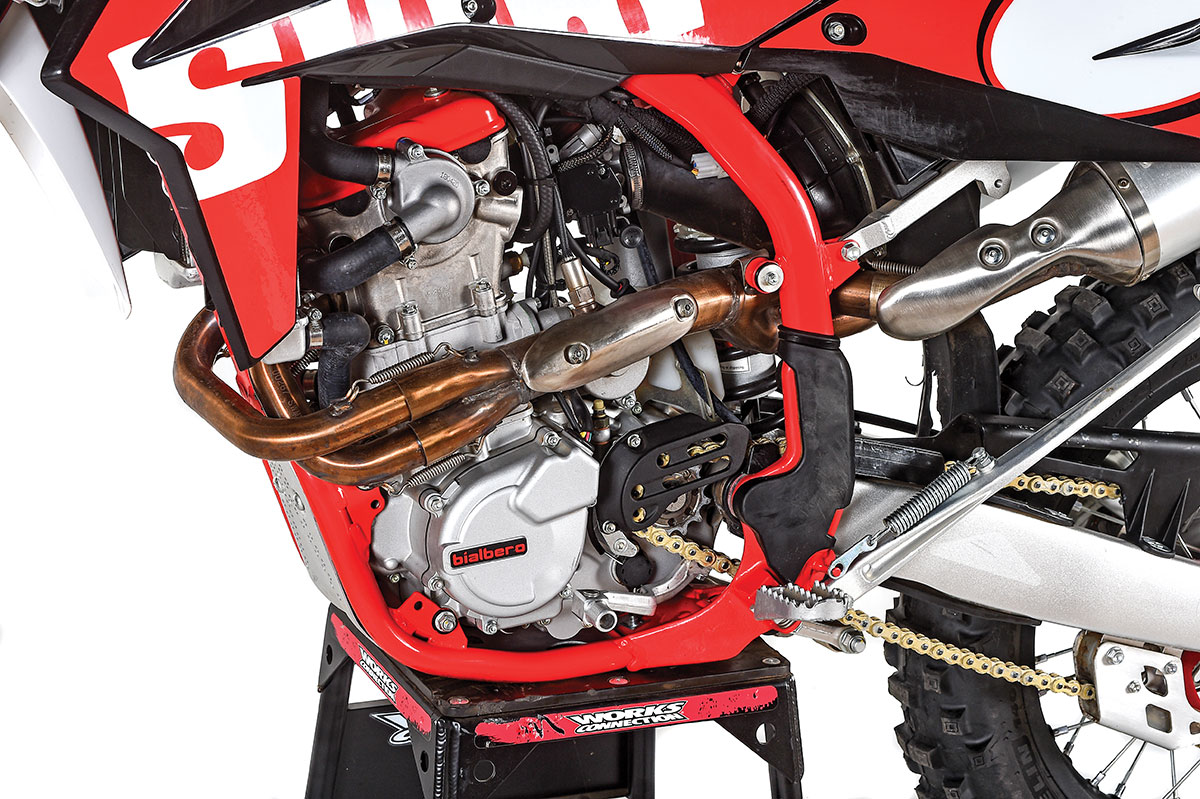 Any dual-sport bike requires that you make some sort of compromise. That’s the nature of the beast, even in these times of expensive, highly dirt-oriented examples. The SWM is a legitimate street-legal dirt bike, just not as hardcore as ones like the Beta 500RR-S and the KTM 500EXC. Old-school dual-sport bikes like the Honda XR650L and Suzuki DRZ400S are at the other end of the spectrum, with dirt capability as a secondary concern. At $7795, the SWM has a price that’s more in line with those bikes but with vastly improved performance and high-end componentry. It’s actually the only bike on the market that strikes that balance. It’s too bad we had to wait 10 years for it to come back.