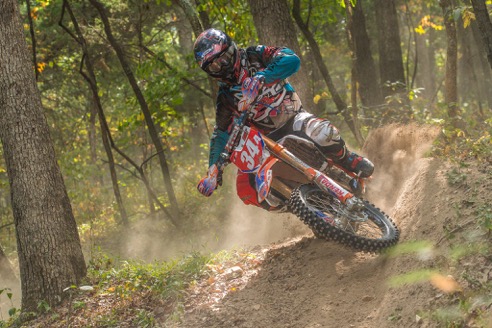 Steward Baylor Jr. grabbed his second win of the season with an impressive performance at this weekend’s Lead Belt National Enduro in Park Hills, Missouri – round seven of the Kenda AMA National Enduro Series Powered by FMF. The SRT Racing-backed Baylor won four of the six tests, claiming the win by 43-seconds over his brother, Grant, while series point leader Thad DuVall finished third, another 15 seconds back.

With the win, Steward carved nine points out of DuVall’s lead in the series standings. With just two rounds remaining the South Carolina rider now sits second, just seven points out of first.

Points leader DuVall turned in an amazing performance, finishing third less than two weeks after tearing a ligament in his left wrist, which forced him to drop out of this year’s International Six Days Enduro in France.

“I flew home early from France and I got about five different opinions on what was wrong with my wrist,” said DuVall. “It was severe, but maybe not as severe as we thought. At first they thought I needed surgery, but it turned out I didn’t need it, which was good. So I rode this weekend with a brace and salvaged what I could.”

DuVall was second-fastest in tests two, four and six, and came away with third for the day, earning the Rockstar Energy Husqvarna Factory Racing off-roader 21 valuable championship points.

“It was tough,” added DuVall. “I noticed in the last test I had to use four fingers to pull in the clutch. Since I probably wasn’t even supposed to be riding today, I guess third place is something to be happy about.”

Grabbing his best finish of the year with a fourth was Integrity Acquisitions-backed KTM rider Evan Smith, who finished fifth at the last round and has been steadily improving as the year progresses.