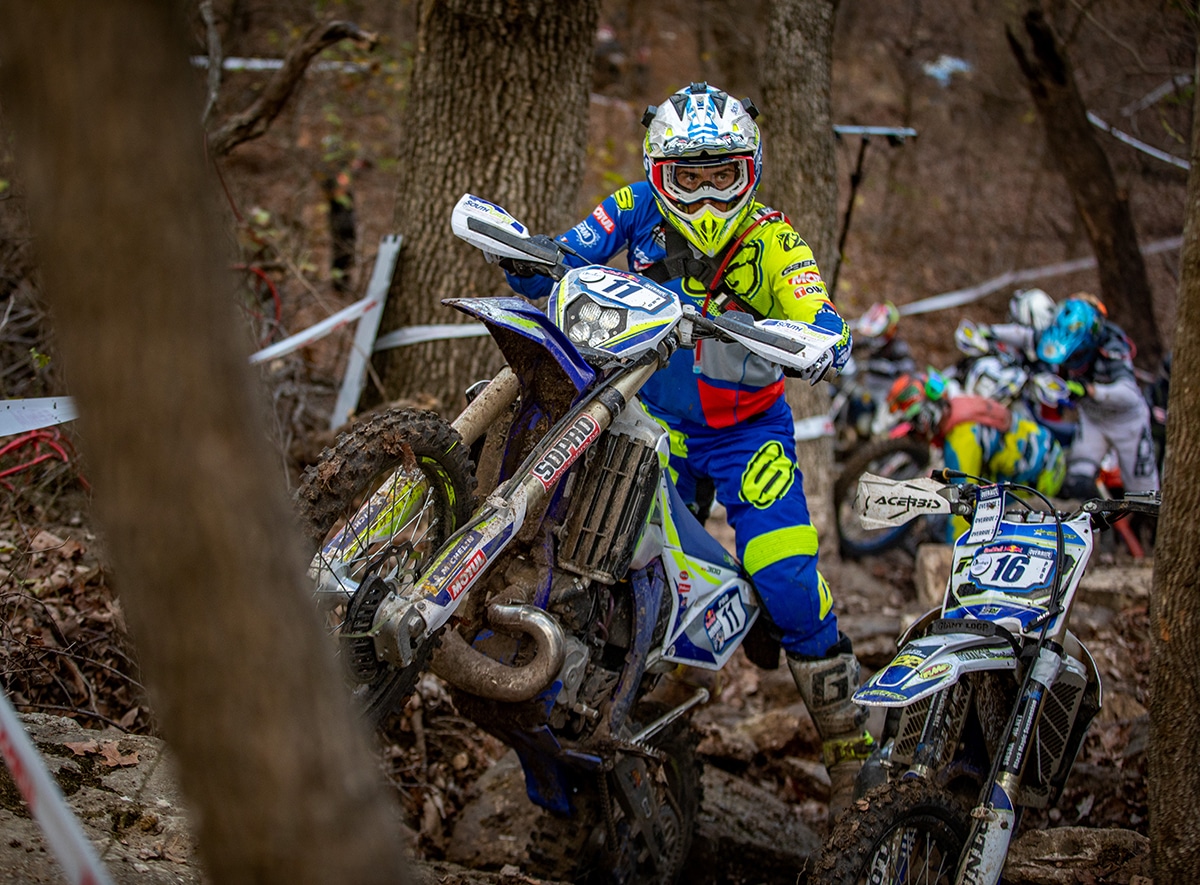 Share FacebookTwitterGoogle+ReddItWhatsAppPinterestEmail
The second edition of the Red Bull Override took place this weekend at Rocky Ridge Ranch in Decatur, Texas. This grueling six hour hard enduro tested the limits of each and every racer in attendance, boasting a nearly impossible format that incorporated more challenging ‘override’ sections which open up in succession as the enduro progresses. AND, it goes into the night adding in freezing temps on top of already slick conditions. Each racer regardless of their class is required to take the override once it is open, which proved to be a nearly impossible task for many who set out to conquer this years course. Among the many in attendance, only 15 riders would complete a mere three laps in the allotted time frame.
The pro class saw several top names including Sherco FactoryONE rider Cody Webb and his European teammate Mario Roman. Both riders sat aboard 2021 Sherco SE300 machines and battled the entire night ending in the top two podium positions.
“Around three and half hours, the cramps started and that’s when I lost a lot of ground to Mario” Cody said after the race. Cramping seemed to be all the buzz in the pits, even third place finisher Factory KTM rider Trystan Hart said he was cramping so badly he needed to get off the bike mid-race. “…the cramps came.. and for a lap and a half I got off my bike every five seconds because I couldn’t walk. It was super painful.”
After Cody’s hole shot start he held ground for the first couple laps, but his stamina would burn out quick and he ended up no match to SUPER Mario. Once Mario took the lead he continued to hold pace, setting him up with a two and a half minute gap by the fifth lap. Trystan continued to have several issues and fell back more than 10 minutes by then… and that’s when the first override section opened. And the gaps got bigger.. except for Mario, who maintained his lead and steady increased the gap on Cody, still trying to stay close on his heals.
These top three would battle the entire enduro, stepping away from literally every other rider. By the enduro’s end, Mario and Cody had completed eight laps total, with Trystan clocking in a solid seven.

“I was not happy with my finish to the (WESS) season, so to come here and get my first win in the U.S., it is very important to me” remarked Mario who was coming off a bad crash that put him out of Red Bull Romaniacs. He wasn’t even sure until the very last minute if he would be able to make it out to the Override, due to border restrictions currently in place because of the Covid-19.

Sherco would claim four of the five top positions for this years 2020 Red Bull Override.