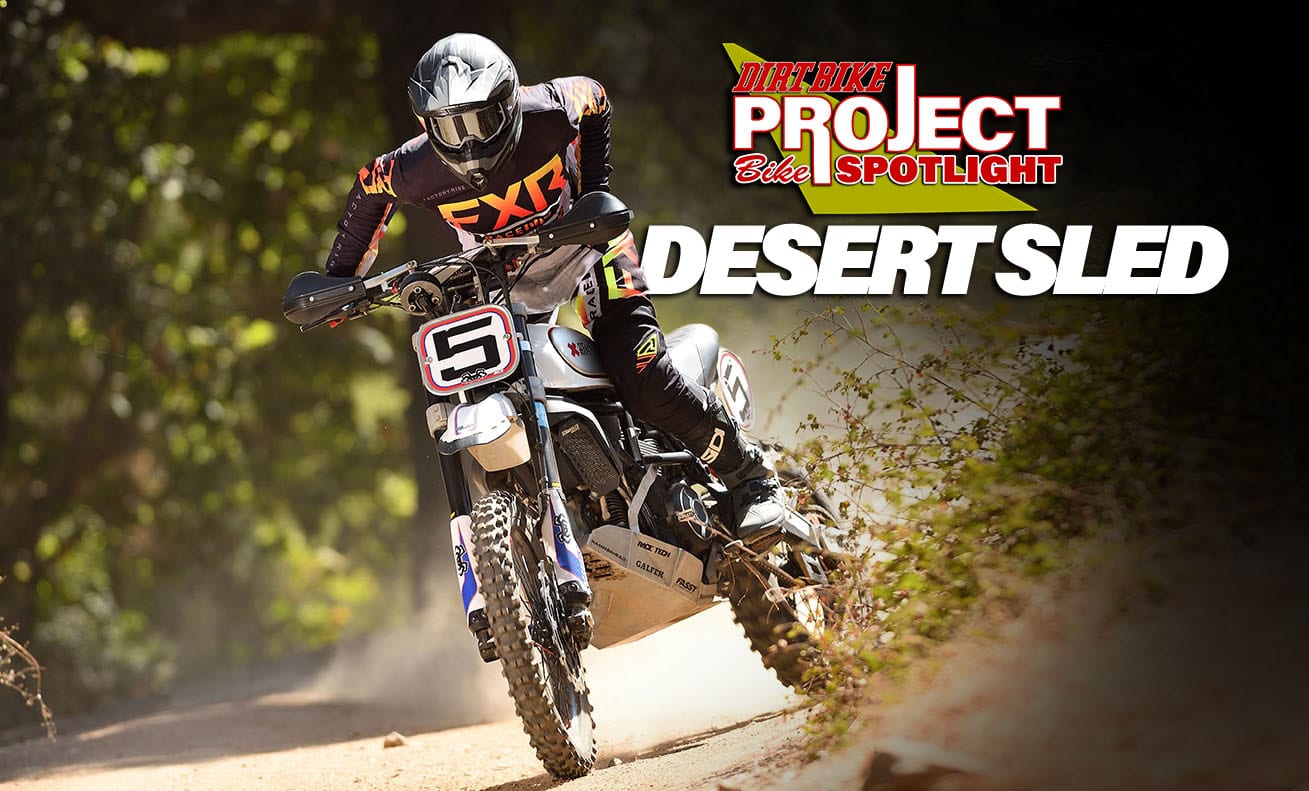 What, you might wonder, is a “Hooligan”? It’s okay to ask. A couple of years ago, the term was only used in 40-year-old movies and Joe Biden speeches. As of last March, however, we can now say with confidence that the word “Hooligan” refers to a class for twin-cylinder motorcycles competing in off-road races. They aren’t quite adventure bikes; they aren’t quite dual-sport bikes, and they definitely aren’t dedicated dirt bikes. They’re outlaws—Hooligans.

The Ducati Desert Sled is an example. “Paul and Becca Livingston approached me with the idea of riding a Ducati in the Mint 400,” said Alexander Smith of Malcolm Smith Motorsports. I said, “Sure, why not? I’m not really into racing anymore, and riding in the Hooligan class sounded like fun.”

Just before the COVID-19 lockdown, the third round of the National Hare and Hound series took place, which would be one of the last races held for some time. The Mint 400 had been a car-only race for years, but for 2020, they opened it up to motorcycles once more and included it in the Hare & Hound National Championship. It was a two-loop race staged out of Buffalo Bill’s Casino in Primm, Nevada, and it was the first running of the new Hooligan class for big twins. Ducati got behind the class and helped put together several teams mounted on Scrambler Desert Sleds. Jordan Graham and Ricky Diaz were on Fast House-sponsored Scramblers, and Alexander Smith and Michael Allen teamed up on a Malcolm Smith Motorsports bike.

“Paul and Becca organized Ducati’s racing effort when I raced Pikes Peak a few years ago,” said Alexander. “That event was wild; very fast and very scary. Since then, I decided I don’t want to go road racing on anything faster than a Honda Monkey.” We didn’t understand how riding an 803cc,100-horsepower, 400-pound Scrambler in a desert race would be any less intimidating, so we asked if we could ride it ourselves.

The Scrambler Ducati Desert Sled is a nostalgia-driven bike that we first tested back in 2018. In stock form, it’s great fun, but it’s not the kind of bike that we would want to ride in the dirt beyond brief treks on dirt roads. Livingston’s Spider Grips team took on the challenge of building three Scramblers for the Mint. Ricky Diaz and Jordan Graham would be on Fasthouse-sponsored bikes, while Alex Smith and Michael Allen would team up on the Malcolm Smith Motorsports bike. Suspension was first priority on the list. The Fast House bikes got custom-made Fox shocks, while the MSM bike had a stocker modified by Race Tech. All three bikes had their forks reworked by Race Tech. They got Scott’s steering dampers, Flexx bars and Fasst Co. footpegs and handguards. The swingarms were extended, and Pirelli full-knob tires were used with mousses. The wheels were laced with Excel rims; the stock 19-inch front wheels were swapped for 21s. BJ Manufacturing made massive skid plates. The anti-lock braking system was disabled, but the brakes were stock. There’s no need to do much to a Ducati motor. The bikes got Termignoli two-into-one high pipes, and their EFI systems were remapped. All of the street-legal equipment was stripped away, along with the side stands.

WHO’S THE HOOLIGAN NOW?
We got our chance to ride the MSM Scrambler a few months after the Mint. The sound it makes when it’s fired up is incredible. It makes an old-school rumble that’s just raspy enough to be sexy. Ducati should upload it to Spotify. When you rev it, it does something in your cerebral cortex that would be banned by the DEA if they only knew.

The horsepower output is pretty much as we remember from our last test of the Scrambler Desert Sled three years ago. It’s super powerful but not revvy like a Multistrada. All of the bike’s power is down low, and it feels like it’s turning a massive flywheel. On a smooth dirt road, it naturally lights up the rear wheel, but not as uncontrollably as you might expect. The Ducati translates a surprising amount of power into forward motion. The first time you enter a turn, you naturally yield to the instinct to back her down. It’s surprising, though, how quickly you build up enough nerve to hold it open longer. It’s one of those experiences where the bike becomes more and more controllable the faster you go. If National Hare & Hounds were all flat dirt roads, the Scrambler could compete for the overall win.

But, they aren’t. Getting through deep sand on any 400-pounder is exhausting. The saving grace for this one is that it’s super stable. Between the extended swingarm and the steering damper, it goes straight without too much nonsense. The hard part is actually when you’re in deep sand and you don’t want to go straight. Redirecting the Scrambler isn’t for the weak. Once again, the more throttle you give it, the better. The one place that philosophy doesn’t work is on steep downhills. The best tactic there is to slow down and take your time.

Race Tech did a great job with the fork and did its best with the shock. Both ends could handle rough terrain and mild whoops surprisingly well. Unfortunately, the rear shock has no reservoir or any way to rid itself of excess heat. When it gets hot, the damping fades and you have to put your go-fast instincts on hold. The custom-made Fox rear shocks on the other two Scramblers were the only two in existence at the start of the Mint. Alex didn’t care that much. As he reported going into this race, it was all about having fun, not winning anything or beating anyone. “The Hooligan class started way back in the field, so we didn’t get into very many one-on-one races with 450s. The bikes we caught didn’t put up much of a fight.”

In the end, Jordan Graham won the class over the Smith/Allen team. Both teams completed two loops. Ricky Diaz got a full loop in before he was stopped by a broken shifter. The winning time of 4:45 made for a long day of riding. More than anything else, the project was simply an exercise to prove it could be done. Hooligans will never be mainstream in desert racing—that would be missing the whole point.
If everyone rode them, they wouldn’t be Hooligans anymore.