In 1994, motocross in the U.S. was changing rapidly. Motocross in Europe, less so. Roger DeCoster watched it all, which prompted this column in the August, 1994 issue of Dirt Bike.

Has motocross changed since the ’70s? Of course it has; if someone had left the sport in ’73 and returned now, the difference would stagger him. For me, the changes seem more natural, because I’ve been involved with motocross throughout that period. It’s sort of like asking if I’ve changed since the ’70s. I might not notice any differences between this morning and last night, but if I look at a picture of myself from ’71, it’s obvious that I have changed quite a bit. 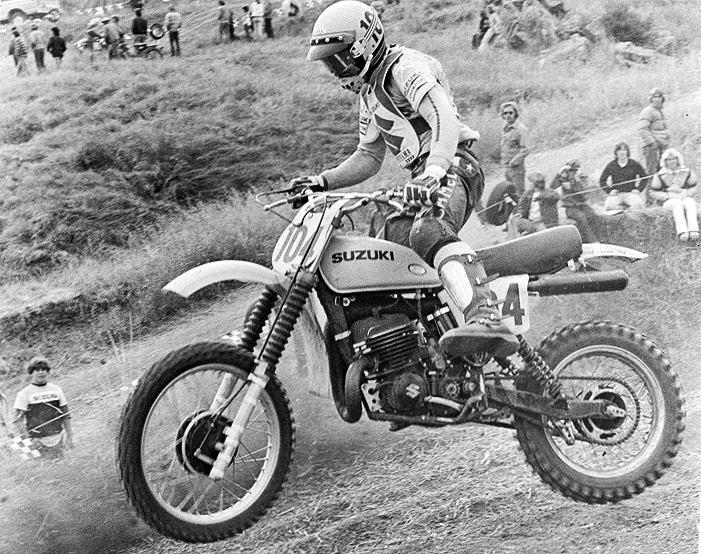 Today I hear stories told about GP racing in the ’70s that sound pretty far-fetched, even to me. For example, I hear again and again that European fans were so fanatical back then, they would lay down on the track in front of one rider so that their favorite MX star would be able to catch up. Well, if this ever happened, I sure didn’t see it. I don’t recall ever hearing a whoop-de-do scream.
On the other hand, it wasn’t unusual to see a group of fans pushing against a fence so hard that a perfectly good line wasn’t usable, or even visible. Then, when the local favorite came through, the crowd would uniformly retreat, pulling back the fence and uncovering the good line. When things got really heated, sometimes handfuls of sand would be thrown at the “bad guys.” I have also heard of beer cans and bottles being thrown, although I haven’t personally seen this.

These things don’t really happen today. That’s fine; we all want racing to be fair and more sportsman-like. I need to admit, though, that when all the fans are well-behaved, something seems to be missing. Nothing motivates a rider like a wild, enthusiastic crowd. Spectators can push a rider to new levels of performance–just ask people like Danny “Magoo” Chandler and Bob Hannah. One reason the average spectator today is so much more well-behaved is his age. Motocross fans are getting older. Many of them are the exact same fans who lined the tracks 10 years ago–only now they think about the mortgage before they lay on the track. Back in the ’70s, it was common practice for a group of fans to follow its favorite rider from country to country. This added a lot of color to the races–they would make banners and flags with wild slogans and try to get as much attention as possible. If this still happens in Europe or in the U.S., it isn’t as evident. Promoters have to be much more safety-conscious today. For safety and insurance reasons, the fans can’t get as close to the action as they once could. If a race promoter could rely on the fans to use some amount of common sense, he wouldn’t have to rope them into virtual prison yards to watch from. This is not just a problem for MX promoters–it’s worse for other sports but since we don’t want to take chances and don’t want anyone to get hurt, we have to keep the fans well out of harm’s way.
The tracks have changed even more than the fans. Today’s tracks are much more groomed than they used to be. This has always been common in the U.S., but seeing a track that is disked, watered and plowed is fairly new to Europe. Back then, they used a course only once a year, but now, with land use restrictions (it’s worse there than in the U.S.), most courses run many events a year. This makes grooming more necessary, so what starts as a natural-terrain course can end up looking man-made. There are certain obstacles that are impossible to duplicate with a bulldozer, while the sections that are easily made with heavy equipment have become more common.
Also, I have noticed that there are riders and team managers who think about canceling a race as soon as circumstances are somewhat difficult. This year (1994) at the opening round of the 500 series in Switzerland, it rained beforehand and the track was somewhat muddy. A group of riders immediately wanted to call off the event. However, through the years hundreds of races have been run in more adverse conditions, and no one even considered cancellation. Mud was part of the sport; we just thought it made the race a little more difficult and a lot more interesting. Sometimes the effort to remove any dangerous spots on a course goes too far, too. Promoters end up removing sections that are simply unusual or tricky. The end result is a track with fewer lines and no sections where the rider has to be creative just to get from one end to the other. When the British GP was run at Farleigh Castle, there was a rough section of the course that must have been 50 to 60 feet wide. There were dozens of lines–actually more like trails-running through it, and a rider had to really think to negotiate it. We don’t see sections like that any more. Riders would claim it isn’t real motocross. What they really mean is it isn’t something they have seen and ridden 100 times before. In this case, I think we have lost something.
Expectations have increased over the years. More is expected from the riders, so the riders expect more in return. More is expected of the promoter, so the promoter expects more, and so on. As things progressed and mechanics worked harder and riders needed more privacy, the closed paddock or pit area came into being. Enormous VIP tents appeared when big sponsors came into the picture and motocross became much more professional. Today, motocross is competing with other sports for big sponsorship money, TV coverage and big crowds of spectators. I think most of this is great. I think that motocross ranks up there with any sport in the world in terms of the professionalism of the people involved. With all of this, though, one thing is certain: for better or worse, motocross will never be the same as it was in the ’70s.