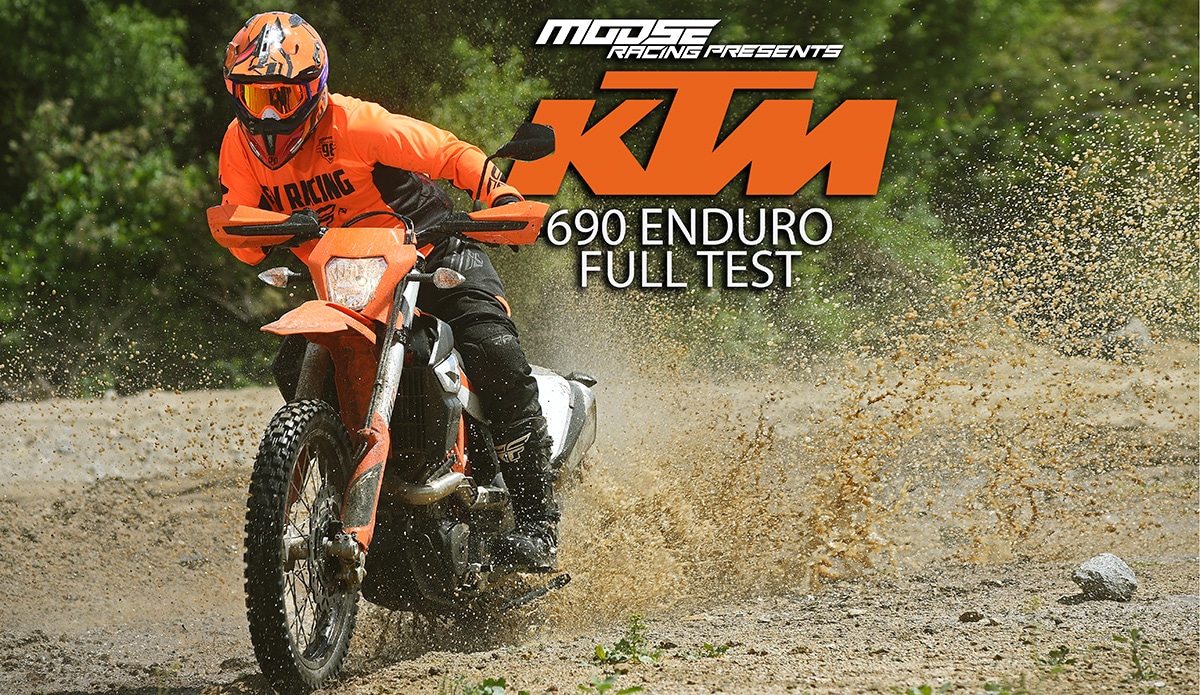 The KTM 690 Enduro R is back, and it’s mostly new for 2019. The 690 has been around for some time as kind of a transition bike between hard-core dual-sport bikes and massive adventure bikes. In truth, there’s nothing quite like it. On one hand, it makes far more power than traditional dual-sport bikes such as a KTM 500EXC or a Honda CRF450L. On the other hand, it’s much lighter than a KTM 1090 Adventure or an Africa Twin. What do you compare it to?

A SMALL CLAN
The KTM 690 Enduro R exists in a very small category with only its own family members for company. Husqvarna offers a 701 Enduro that has the same engine, frame and suspension. The Husky has only variations in componentry and bodywork to set it apart. There’s also a street model with the same motor called the 701 Vitpilen and Supermoto versions from both KTM and Husqvarna. This is a company that gets mileage out of its designs. The 690 motor is the most powerful single-cylinder motorcycle  motor we know of. It always has been, and now it’s more powerful yet. The motor looks mostly the same, with a vertical cylinder, two balance shafts and a single overhead cam, but everything has been subtly redesigned. Somewhere along the way it lost its throttle cable and is now ride-by-wire. That makes it more compatible with various electronic features and ride modes. It has cornering anti-lock braking and lean-angle sensitive traction control, not to be confused with the traction control used on KTM motocross bikes, which is a completely different system. The handlebar-mounted switch looks the same, and you turn it off and on in the same way. You can also disable ABS, but that takes a little more effort. You have to plug in an electronic dongle and press a button on the instrument cluster. It also has a quick-shifter system, which means you can upshift easily without the clutch.

The frame, bodywork and suspension are new. As with the motor, you have to look closely at the frame to see how much it has changed. It’s still a trellis design, but the geometry has been tightened up. The flex characteristics have changed, and (thankfully) it has more steering lock. The front suspension is a variation of the Xplor coil-spring fork, and the rear end uses linkage. It has a little under 10 inches of travel at both ends.
The most obvious of all the changes is the look. It now has the same vibe as KTM motocross bikes. The new plastic includes a new tank, which has increased fuel capacity—now 3.6 gallons.

THE MAIN EVENT
The motor is the star of the show. The torque is unreal! In outright acceleration, it’s fairly impressive, but it’s the roll-on pull that makes the 690 special. When you’re already going 40 or 50 mph, a blip of the throttle has immediate results. The bike lunges forward. It’s unlike anything in the off-road realm and will hold its own with full-time sport bikes because of its power-to-weight ratio. The first time you take it in the dirt, though, all that power seems to vanish. It turns out that traction control plays a big part. When the rear wheel spins, the bike’s electronic brain steps in and steals horsepower. This isn’t like the traction control that’s common on street bikes where the motor suddenly starts missing and hesitating; it’s more as if the bike has suddenly up-shifted two gears. Your first reaction is to stab at the button wildly to eliminate the power thief. After you ride the bike at full potency, though, you might change your mind. If you’re on a dry, gravelly hill, the 690 can be a handful. If you press another button on the same controller, you get mode 2, which has limited traction control. This is best for dirt roads. If you get into sand or real mud, though, you have to turn TC off completely. It turns out that computers still haven’t figured out how much wheelspin is necessary in those conditions, but the day is coming.

The bike’s true dirt capabilities are limited by its weight. KTM claims it is 320 pounds without fuel. That exceeds the capacity of the fabulous Dirt Bike scale, but that seems like a realistic figure, and KTM has been shockingly honest about all its advertised weight numbers recently. That’s a heavy dirt bike, but it’s not overwhelming. The bike’s mass is similar to an old-school Honda XR650L’s, but the KTM has twice as much power. Literally. So, it can go almost any place a full-time dirt bike can go as long as you use your head. You don’t want to fail on a hill-climb attempt, and you can’t flip a U-turn on a singletrack trail. It’s just too much bike. The same holds true for deep whoops and speed. The 690 doesn’t have the suspension travel to deal with that. It can be made to work better, though. A few years ago KTM had a factory Baja team that raced the 690. The riders all reported that the suspension was the least of their worries, even in the deep whoops around San Felipe. It was in the sand and rocks where the bike was too much to handle.
In stock form, the 690 comes with Continental TKC80 tires. These are a good choice considering the bike’s where-will-I-ride-this-week nature. They’re much better in the dirt than the rubber that comes on, say, a Honda CRF450L, but not as durable on the street. Overall, it would be hard to find a better tire for all-around use.

STAY IN YOUR LANE
We don’t know of any other bikes that can tag along on a cross-continental trek with a band of Super Teneres and BMWs on one weekend, then hang with a bunch of EXCs and two-strokes in the desert the next weekend. The 690 can do just about anything, but know up front that your buddies will have to wait for you at some point. Adventure bikes will pass gas stations where you’ll need to refuel. Lightweight dirt bikes will be able ride through sections where a 690 rider will have to stop, think and plan. The KTM 690 Enduro R is one of those bikes that should be sold in pairs, so you always have a friend that goes where you go at the same pace. The price of $11,799 simply means it will have to be a very good friend. 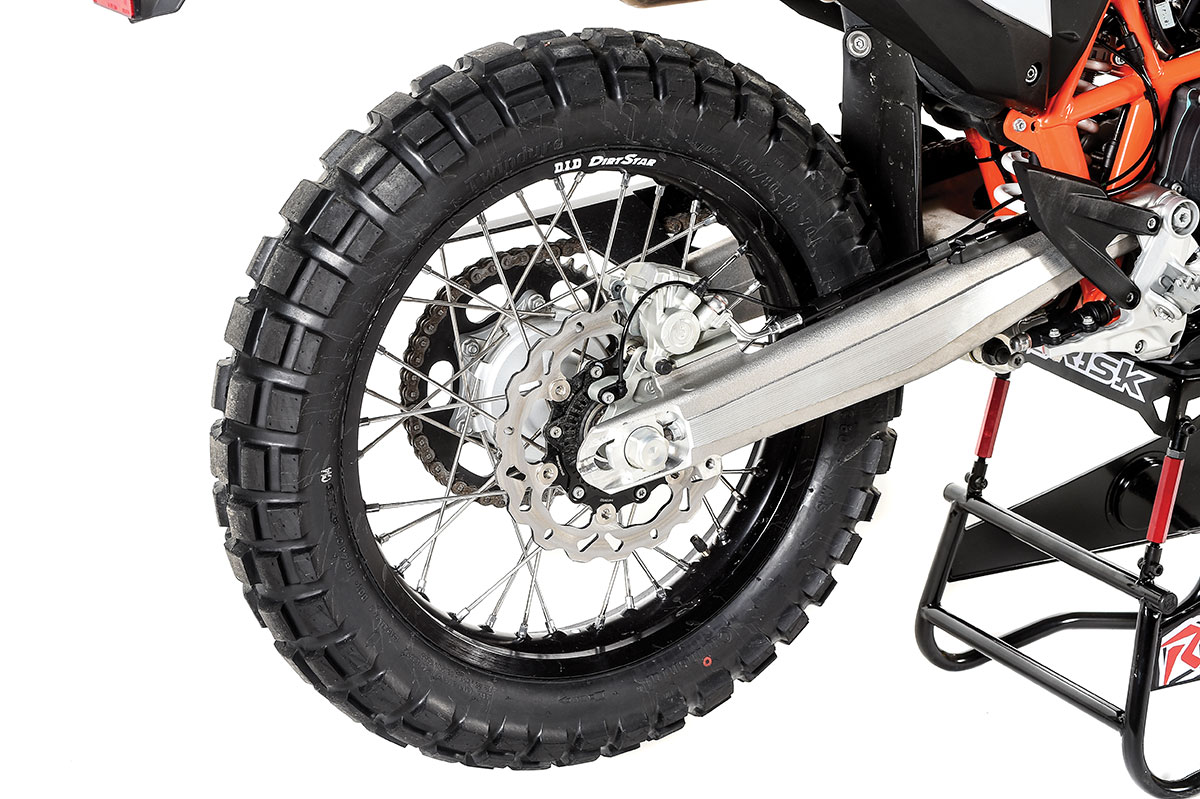