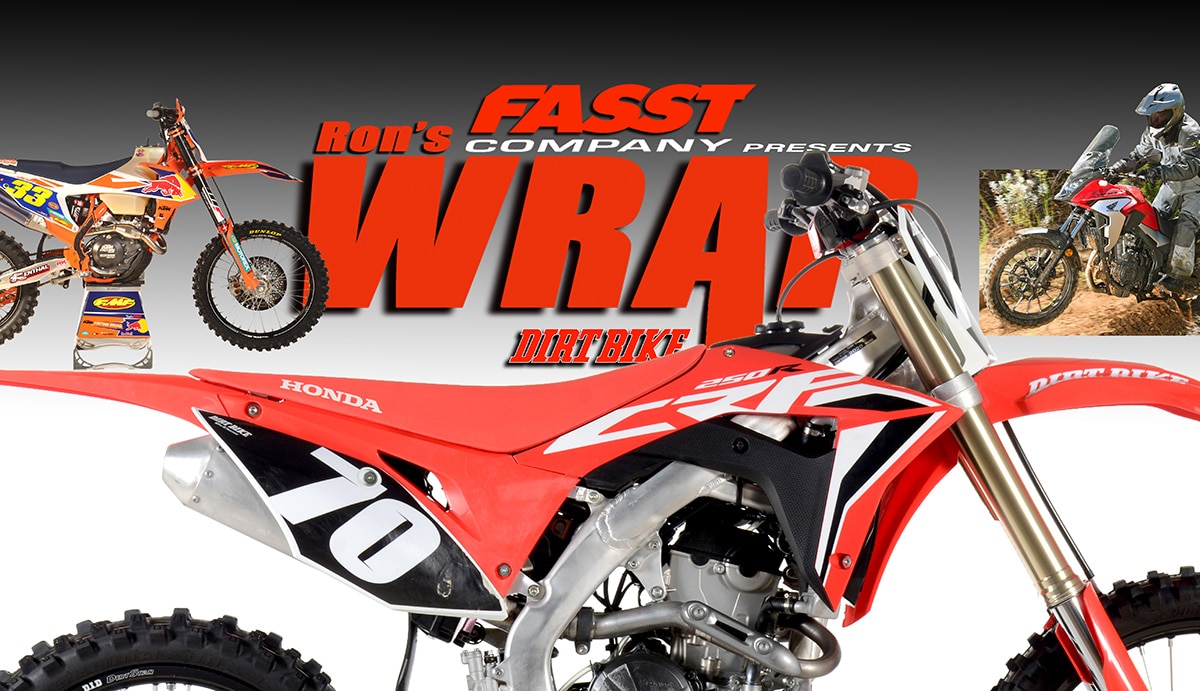 The 2020 250 MX shootout has unofficially begun even though we don’t yet have all the bikes. We do our best to test each of them individually before they go out all at once. This week we spent some more time with the Honda CRF250R. This is a bike that everyone loves to ride. It was redesigned from the ground up in 2018. When I say “from the ground up” I really mean it. We hear about redesigns often, but the Honda was a rare complete and total remake. It was a great machine that was unanimously voted to be the best handling bike in the class, but it had one glaring fault that kept it from winning the shootout. It had terrible low-end power. Honda put a band aide on it for 2019, but 2020 is the first real attempt at dealing with the problem.

Honda engineers redesigned the head and reshaped the combustion chamber, gave it a new piston, a new exhaust pipe and new cams. There’s less overlap, and the exhaust cam stays open a little longer now. The EFI settings are new, although it still has three different maps available on the fly. Second gear is a little taller, the clutch springs are stiffer and there are a handful of other motor changes. The frame got the same updates that the 450 got last year, which add up to less rigidity. 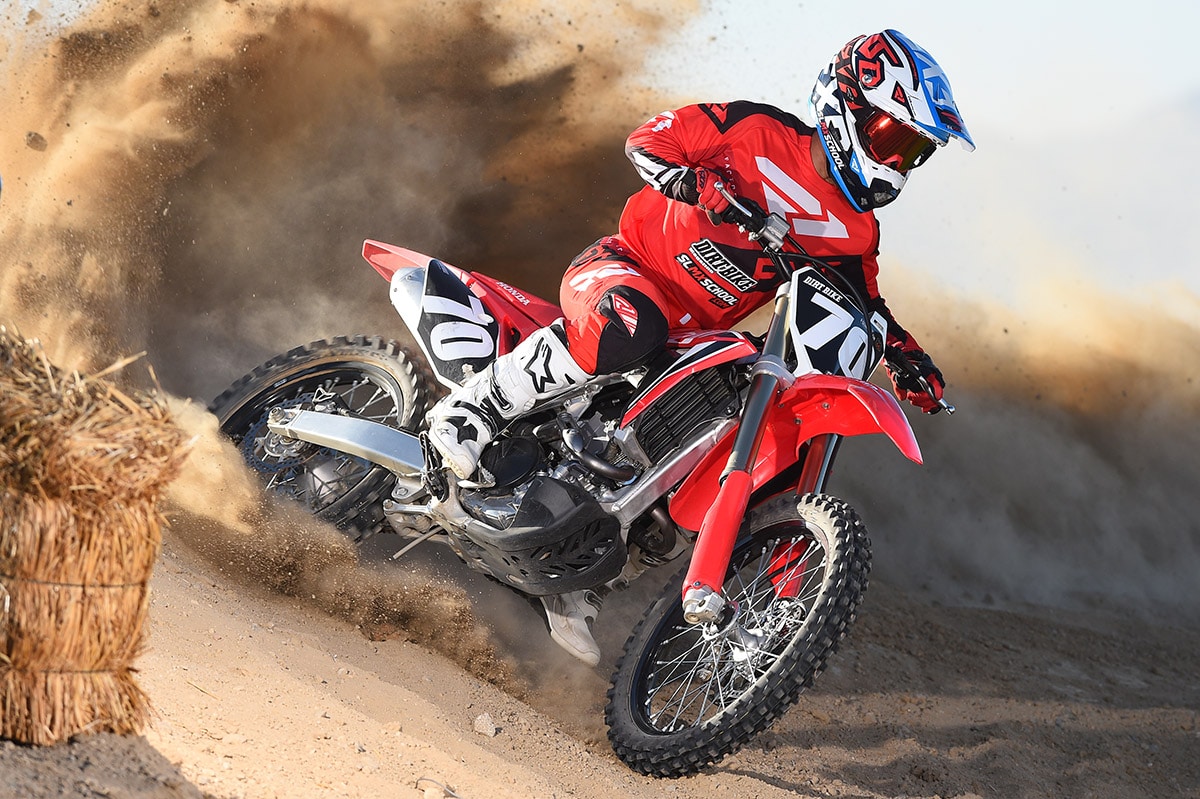 The bottom line is that the Honda is back in the game for the 250 shootout winner. It truly does have more low-end power and it still is the best handling 250F that we have ever ridden. Last year, the Yamaha was the favorite in this class, but it wasn’t an unqualified winner. It had the most low end power, but it wasn’t as fast as the Honda on top and it had a cramped, goofy seating position. The Honda and the Yamaha are the same weight–both of them gained weight when they went to electric start and are tied as the heaviest in the class. The KTM and Husky are a good 10 pounds lighter. The wild card in the 250 class is the 2020 Kawasaki. It doesn’t look that different and some people might dismiss it because it has no electric start. But it’s lighter than the Honda and Yamaha, and for 2020 it has much more power. This will be a fun shootout.

The fundamental problem with adventure bikes is that few riders are willing to throw a $20,000 motorcycle into the dirt where anything can happen. Honda offers a decent solution with the CB500X. It sells for $6699, which is less that a 125 two-stroke, so you can take it in the mud and dirt without feeling guilty. We tested this bike a few years ago and liked the idea, but discovered that we didn’t really want to take it in the dirt–it was pretty much a full-blooded street bike. Now, the 2020 version of the bike has a number of updates that makes it a little more palatable off-road.

The most important changes are the 19-inch front wheel (which used to be a 17-incher), the increased suspension travel (now 5.3 in front, 5.9 in rear), the increased ground clearance and more power. Honda made some changes in the intake tract and head to give the DOHC motor some more mid-range and bottom-end. We got ahold of a CB500X with some decent off-road tires (Bridgestone Battlax) and took in into some fairly amazing places. The ground clearance is decent and as long as you don’t go crazy, the suspension isn’t half bad. The biggest drawbacks are the footpegs (they’re too narrow and to far rearward) and the seating position, which still isn’t quite right for the dirt. 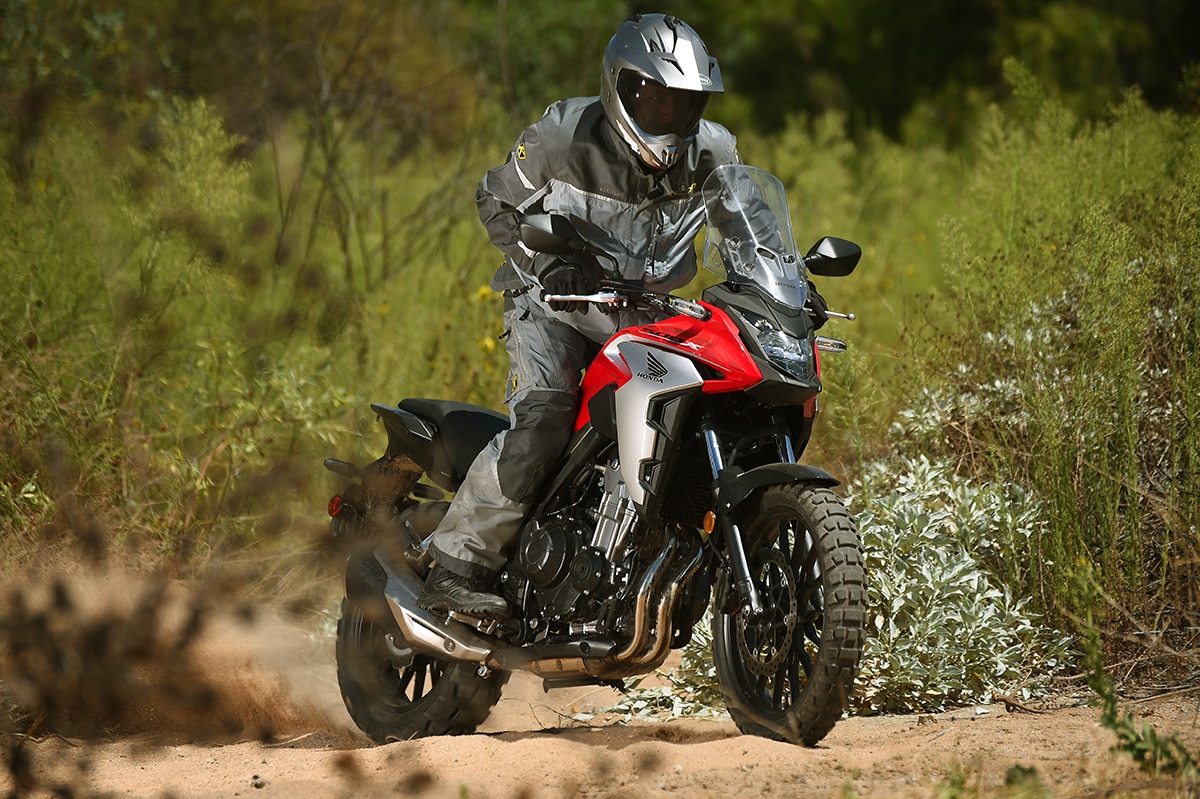 The price is the most important piece of this puzzle. The CB500X sells for about the same price as the now-discontinued Kawasaki KLR650. There’s a lot of motorcycle here. It would be much easier to cross a few states on the Honda than on a big Single like the KLR. There will be a full test of the Honda CB500X in the December, 2019 print edition of Dirt Bike. 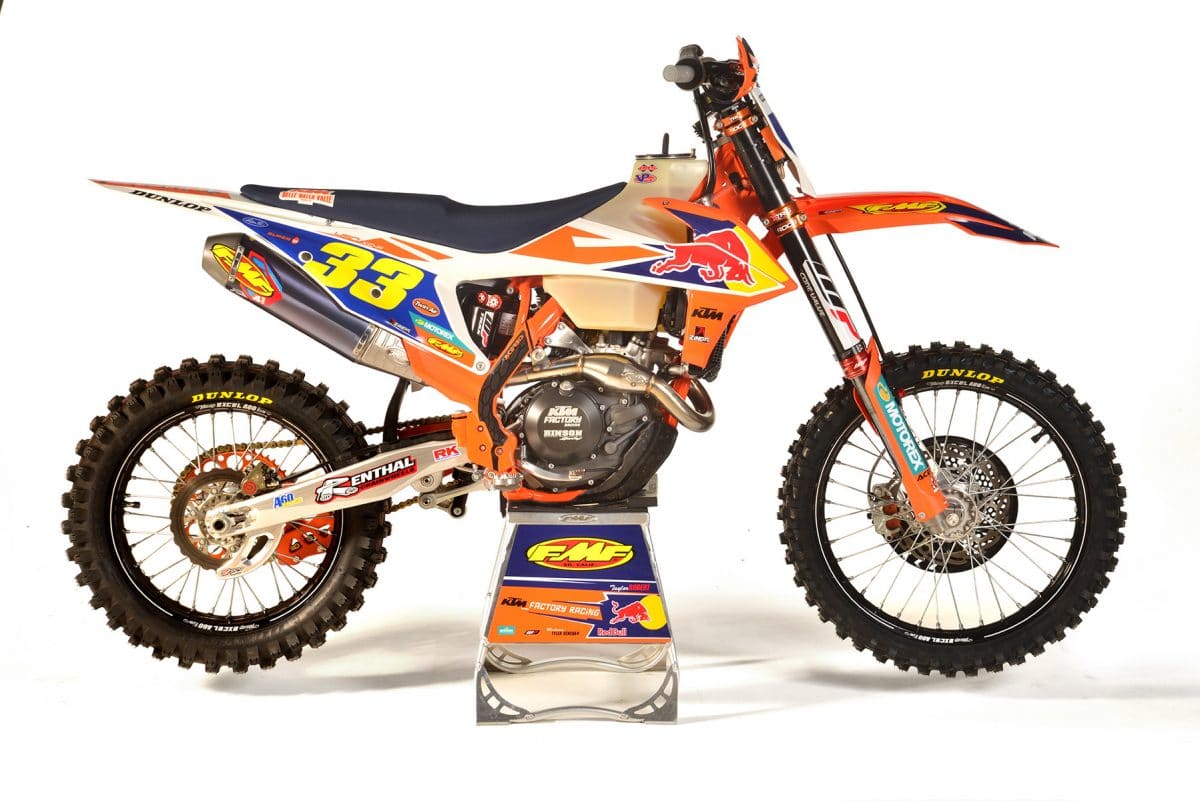 Last weekend, Taylor Robert won the Glen Helen round of the WORCS series. After that, his mechanic Ty Renshaw had the bike looking brand new again within about two days. We got it into our photo studio for an close look at the details that go into a factory-level off-road bike. There aren’t that many unobtainable parts on Taylor’s bike, and he apparently is very easy on equipment. The suspension is all provided by WP, but you could order the same stuff as long as you’re willing to sign a big check. Brandon Krause will be doing an in-depth look at the bike right here at www.dirtbikemagazine.com later this week. Look for it. 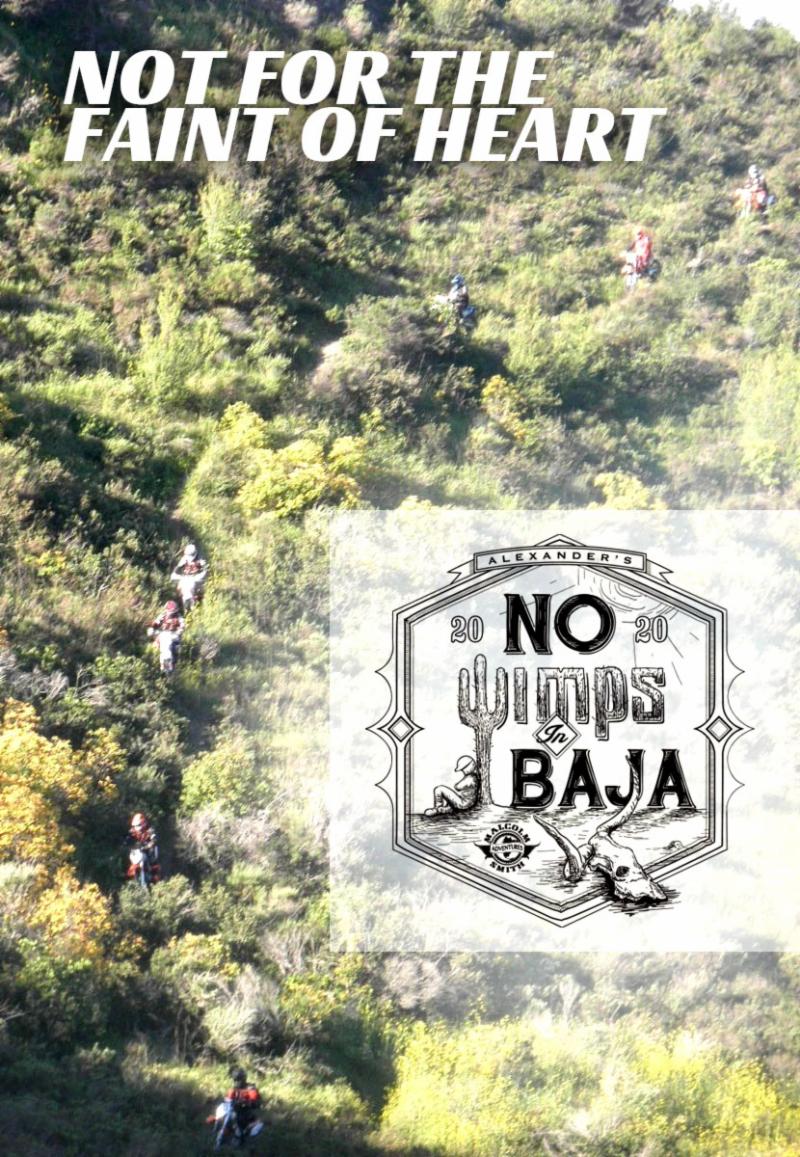 Malcolm Smith has a long history of taking innocent victims on epic trail rides. His latest one is the No Whimps ride in Baja and it’s open to qualified riders who aren’t the “touring” type. Malcolm has his own network of challenging trails, and he has full support so his rides are as safe as possible. You can register for the Malcom Smith No Whimps rider here. 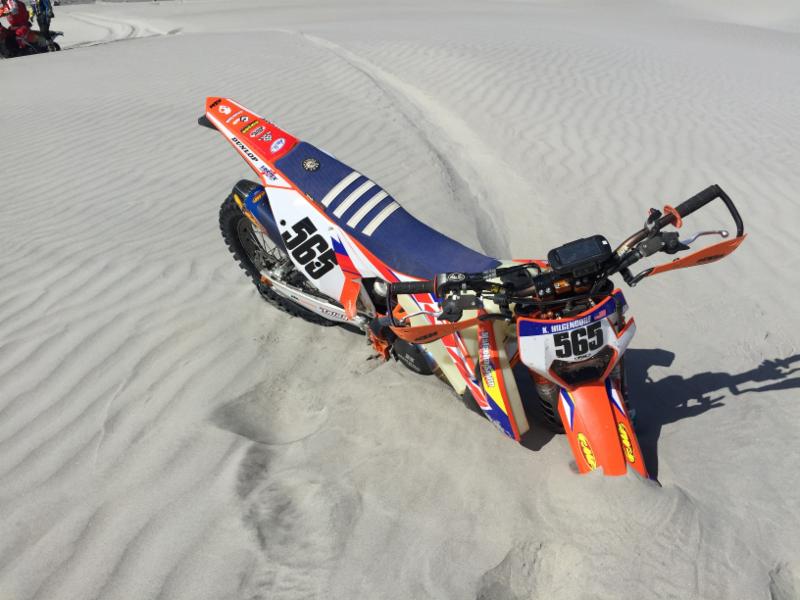